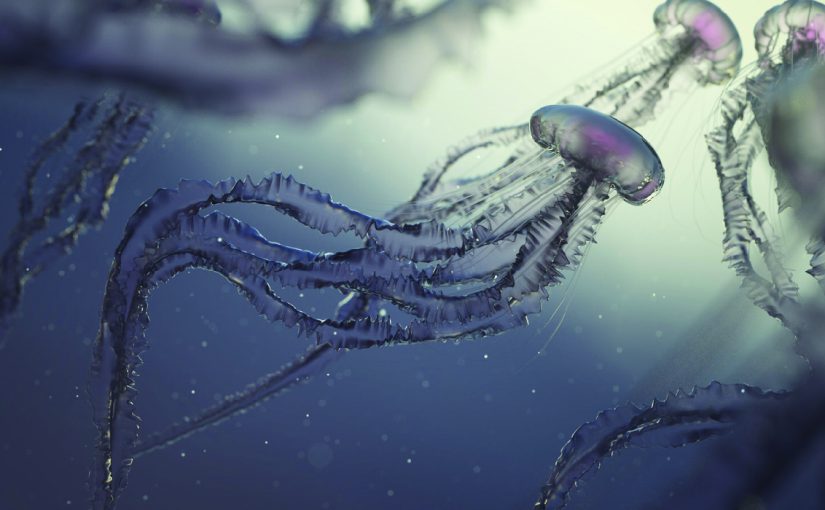 2 Key Senses to Survive
Touch
The tentacles on a Jellyfish are covered with stinging cells (cnidocytes) that sting or kill other animals: most jellyfish use them to secure prey or as a defence mechanism.

Sight
Box jellyfish are famous for having 24 eyes of four different types: upper and lower lens eyes, pit eyes, and slit eyes. They detect the mangrove canopy by an eye type that is specialized to peer up through the water surface and that is suspended such that it is constantly looking straight up, irrespective of the orientation of the jellyfish.

The Construct (Skeleton)
The body of an adult jellyfish is composed of a bell-shaped, jellylike substance enclosing its internal structure, from which the creatures tentacles suspend. 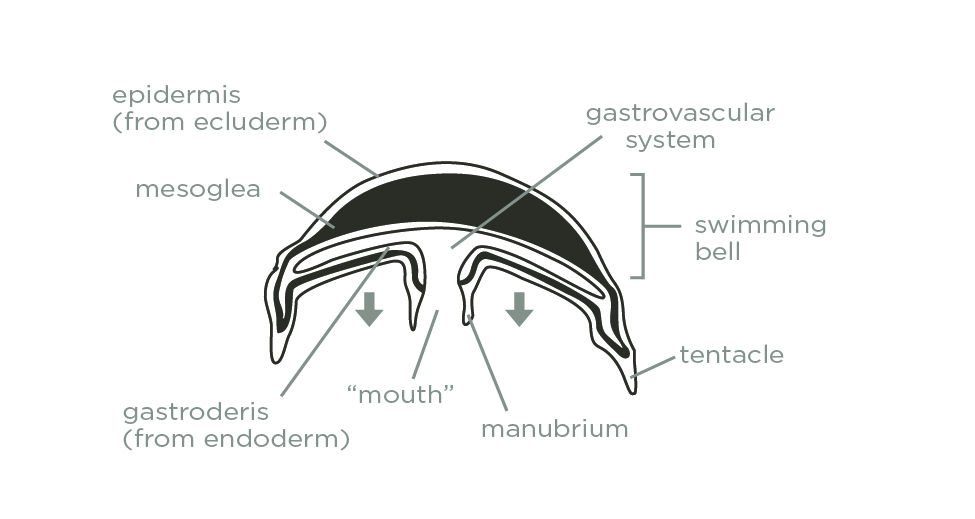 Hydrostatic skeleton
A structure found in many soft-bodied animals consisting of a fluid-filled cavity, the ceolom, surrounded by muscles. Water exerts pressure on muscular walls.

Layers
The outer layer is called the epidermis, the inner layer which lines the gastrovascular cavity is called the gastrodermis, and the middle layer consists of a thick substance called the mesoglea.

Rhythmic Pulsations
Jellyfish usually drift, however, occasionally you will see them swimming. Jellyfish swim by rhythmic pulsations of the umbrella or bell. The movement is very like an umbrella being open and shut slowly. It is coordinated by a very simple nervous system and by sense organs around the edge that are sensitive to light and gravity and chemicals in the water. 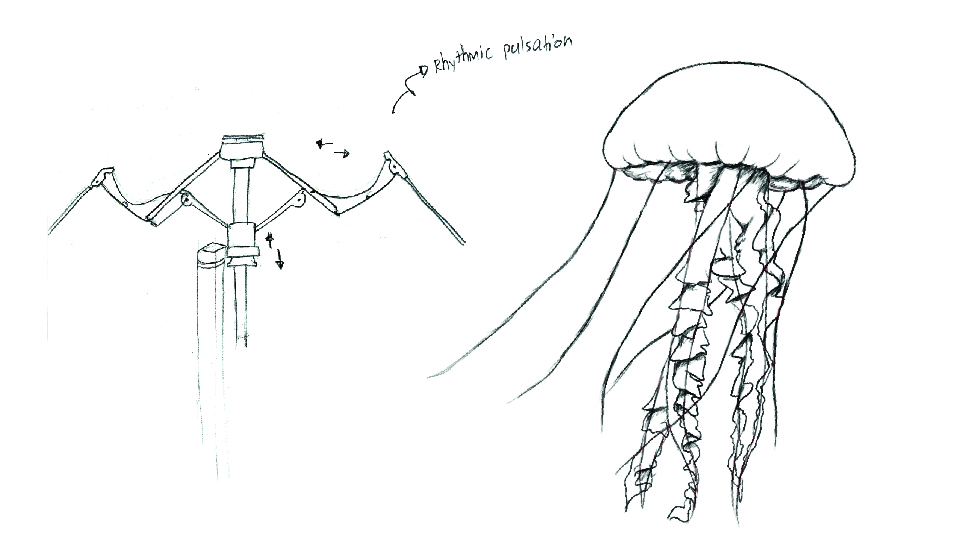 Jet Propulsion
To move forward, jellyfishes take water into their muscular bell and then squirt it out behind them, creating a jet of water that propels the jelly forward.

Mechanisms
The rhythmic pulsation motion reminded me of the umbrella motion so I decided to see the skeleton version of it by stripping the plastic off the umbrella. I had to use a hollow pole to not only hold the umbrella in place but also to stop the expansion of the umbrella to a certain point (so it does not fully open up).

A motion that I can consider is by using a pivot point method to move the “bell” or the umbrella skeleton up and down. However, because there is a friction involved, the whole structure will wobble.

I am also considering the crank shaft method that I sketched out for a smoother motion. 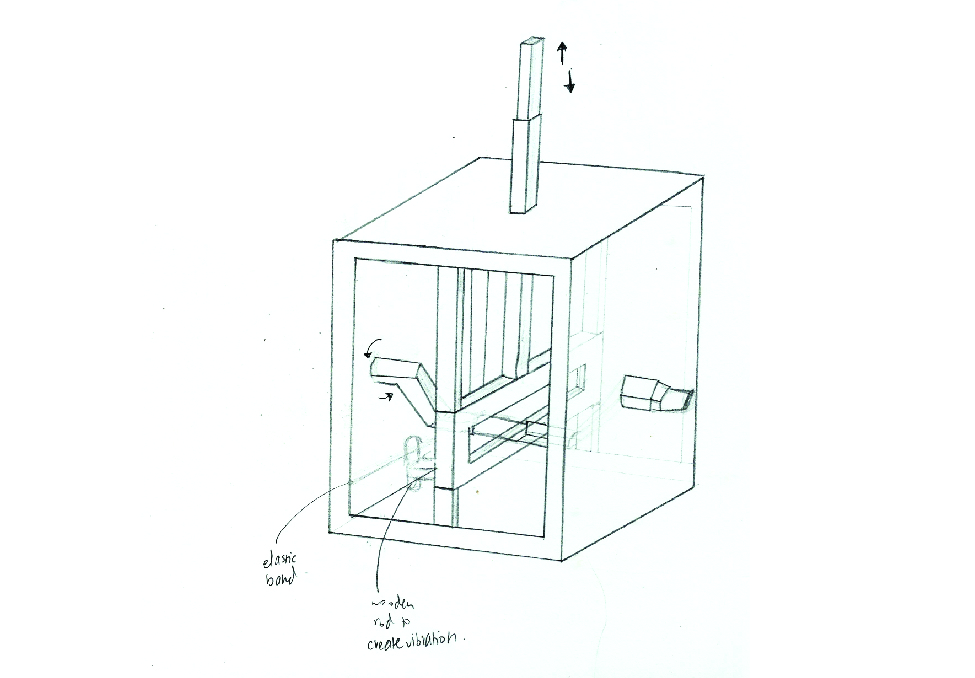 Existing Jellyfish Robots
Prior designs of robotic jellyfish have used a variety of different classes of actuators to mimic the shape and motion of common jellyfish species.

Cyro by Virginia Tech College of Engineering
A man-sized autonomous robotic jellyfish, the robotic jellyfish is five-foot and seven inches wide. Cyro is modeled and named after the jellyfish Cyanea capillata. It is a larger version of RoboJelly, which was unveiled in 2012. The projects are funded by U.S. Naval Undersea Warfare Center and the Office of Naval Research. 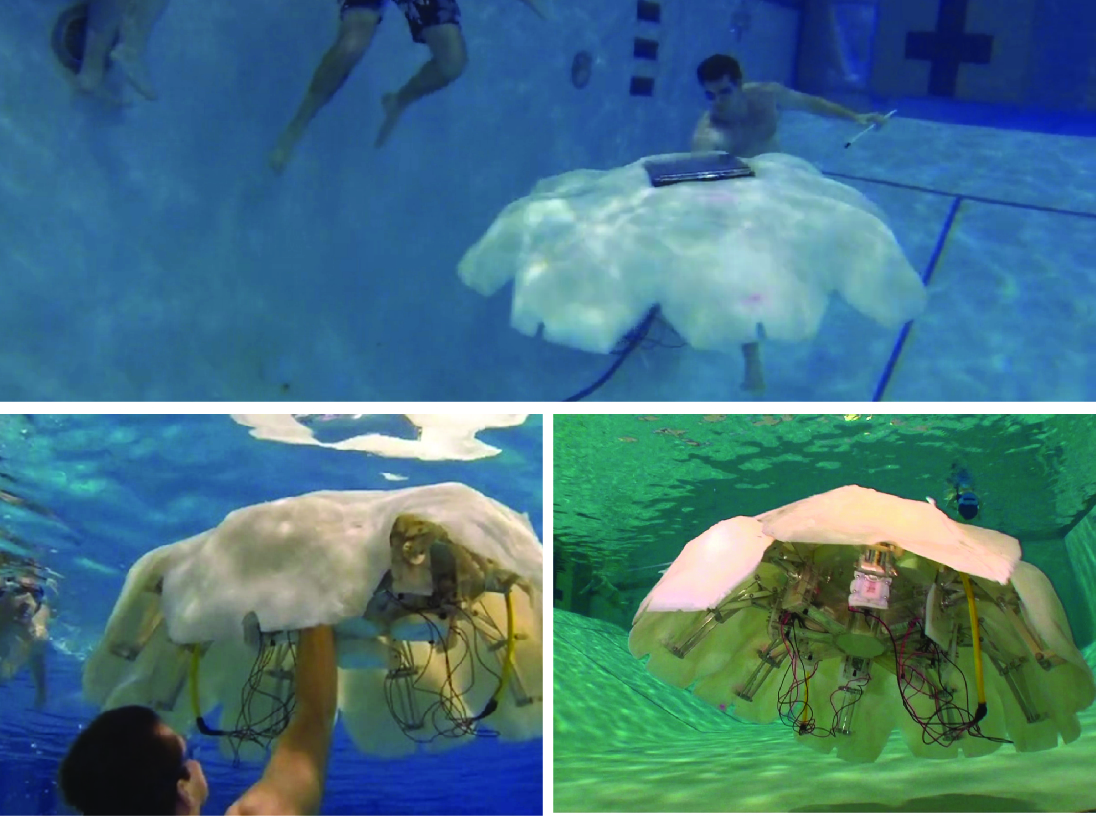 The goal is to place self-powering, autonomous machines in waters for the purposes of surveillance and monitoring the environment. Large jellyfish robots could also be used to study ocean life, map ocean floors and monitor ocean currents.

AquaJelly by Festo
AquaJelly is “an artificial autonomous jellyfish with an electric drive and an intelligent, adaptive mechanical system.” Apparently the idea is to have several of the robots autonomously working together using a communication system composed of Zigbee short-range radio on the surface and LEDs when underwater. 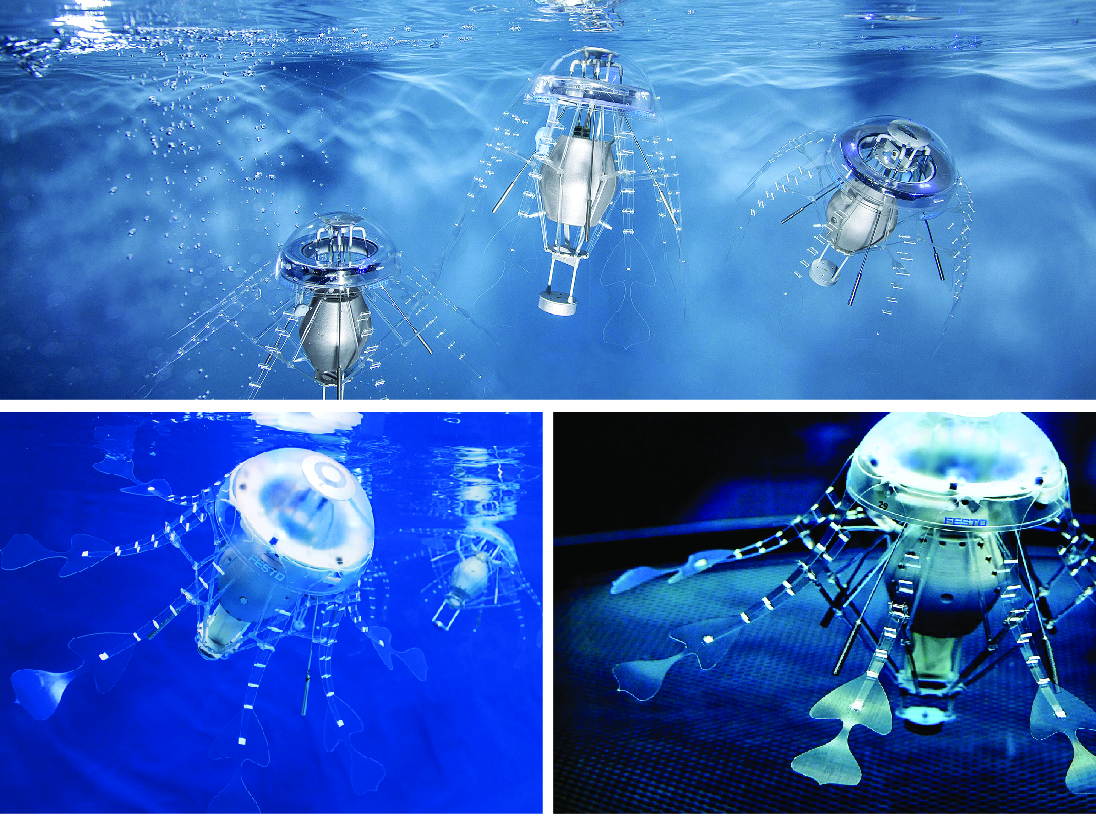 AquaJelly consists of a translucent hemisphere and eight tentacles used for propulsion. At the centre of the AquaJelly is a watertight, laser-sintered pressure vessel. The motion of the AquaJelly is controlled by shifting its weight. Two servo motors integrated into the central pressure vessel actuate a swashplate. This swashplate controls a four-arm pendulum which can be steered in the four spatial directions. When a pendulum moves in a certain direction, the centre of gravity of the jellyfish changes in this direction.

Possible Challenges
Since I am designing the structure of my jellyfish robot, I might need to produce customized parts of the robot for it to move the way I wanted it to. It also requires a sturdy structure. Hence, I need to 3D print them because laser-cutting acrylic will still be too flexible when the jellyfish is moving up and down.