In this 1 minute short clip, I am a (rainbow) Ghost.

What’s so great about being a ghost, you ask? Ghosts are just a figment of the imagination, yes. But think about it, whats not great about not having any responsibilities? Have no care in the world, and you can float around happy and be nonchalant. Studies? Relationships? Nawww, a happy ghost won’t have time for that.

Unlike living things, ghosts are light as air. The only downside will probably be… that we’d cease to exist if humans don’t believe in us.

Annie Abrahams is a Dutch performance artist/curator who uses different means of communication via the online platform to examine and test out the potential and boundaries of social communication between humans regardless of distance or time zone differences. One of the perks of mass media is that it warrants interconnectivity, uniting people from all over the globe to come together and perform a task within just matter of seconds.

Project Angry Women (2012) is a live performance broadcast constructed by Abrahams. This piece of work rationalizes over the issue on time and space, an expression focused on women. This emotional, melodramatic experiment is conducted on females across the continent, streamed over the internet webcam with Abrahams facilitating the execution. I would describe it as a form of psychological relieve for the participants. Cultural barriers are knocked down, as women expressed themselves through sounds (e.g. screams, smiles, shrieks) while being live at the same time. Further on in Abrahams experiment, project Angry Man is produced, then subsequently a mixed gender version comes through. Her works aim to reinforce and unfold human behaviours, the side most people find most vulnerable to reveal as we subconsciously try to portray our best sides.

Though one of the cons of multimedia is that it homogenizes culture. I feel that with the availability of internet access, the entire world is acquainting with the same cultural influence, and this way, people will be going after trends. Essentially, we will all be under the same fixated dogma, eventually losing our own essence and uniqueness in time. Our sense of identity will be very much diluted and watered down to what is popular and not factors like what makes us different.

Another aspect which we had discussed over class time – how being on the second/third space takes our attention away during gatherings with friends/family. I do agree to a huge extent how our addiction can potentially overtake interpersonal connection. As much as the fact that social media can take us places, it disconnects us with the present, especially people who are around us physically. 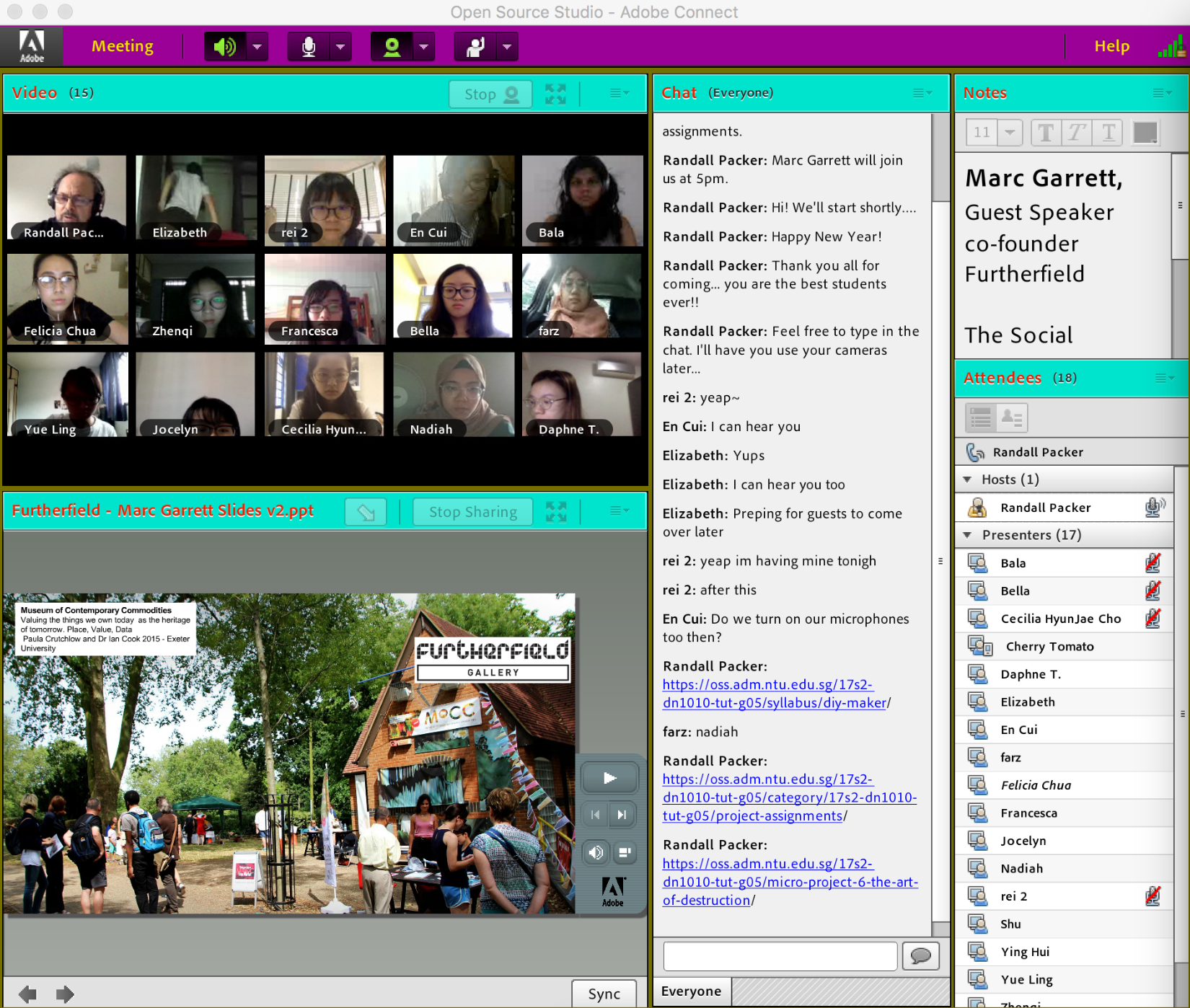 “Expanded from the original term known as D.I.Y. (Do It Yourself). D.I.W.O ‘Do It With Others’. Is more representative of contemporary, collaborative – art practice which explores through the creative process of using networks, in a collective manner.” – Garrett

Do-It-With-Others, also known as DIWO in short, is a terminology created in 2006 by Furtherfield. The history of Furtherfield was inspired by punk movement in the late 70s and early 80s. The main objective is to represent and reflect its involvement in a series of grassroots explorations. The application of DIWO allows a sense of openness which facilitates a good mix of sources to achieve a hybrid experience. This action renegotiates the boundaries and roles of both the artist and the curator. This would allow collaboration to take place, either for individuals or businesses. One example we can draw is from the idea of crowdsourcing – an action that aggregates people with similar interests.

Likewise, DIWO is achieved through an online platform/portal where users showcase the project that they are working on concurrently. Ranging from research to software development or a new innovation. In this case, many people would come together and work on the said project to facilitate crowdsourcing.

(According to Marc Garrett) Essentially, its DIWO if… 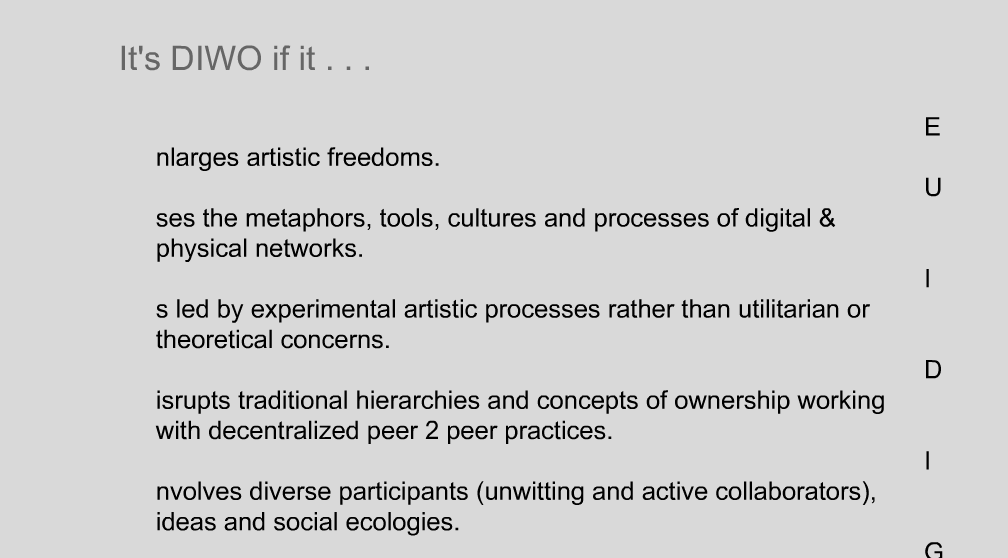 Back to the practice of DIWO, some of the real-time activities that we, students of Prof. Randall, experienced include Telestroll, Social Broadcast, Exquisite Glitch and the concept of Hole and Space. The whole idea of these exercises is to stimulate peer to peer engagement, as well as to kindle communication and allow for more connections to take place. 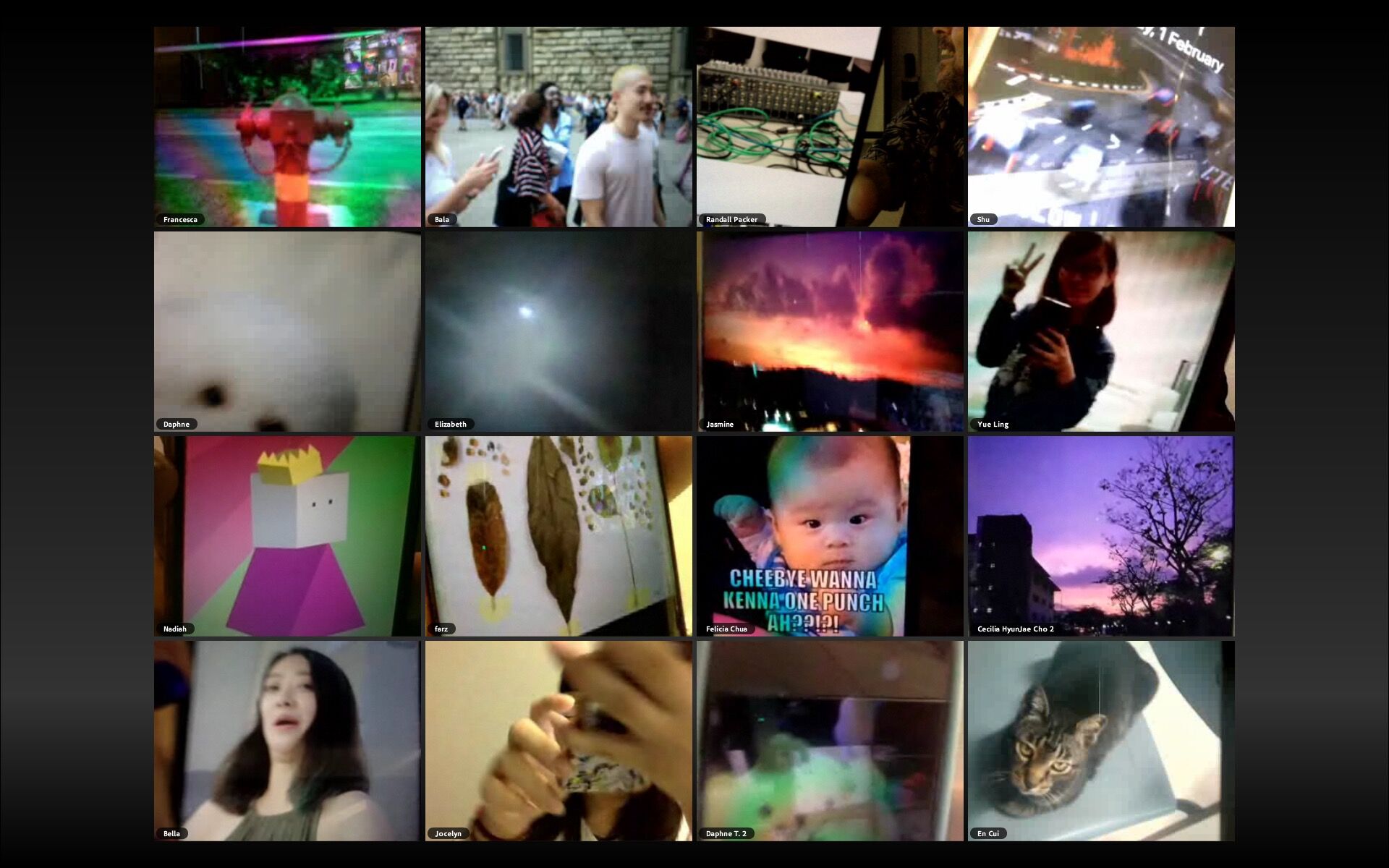 Motivated by curiosity and activism, people can collaborate and create controversies in both the physical world and the third space.  Furthermore, the Social Broadcast done via Adobe Connect brings about the idea of a collaborative framework. In this scenario, we would come together and attempt to perform a task via the online webcam. Given that a third space was formed, everyone was able to connect virtually from the comfort of their home, or any part of the world.

In retrospect, people who were initially bounded by time and space limitations (e.g. time zone differences, distance) can now interact and meet others through this space. This form of engagement brings about the communal interaction between people from all over the world.

“The process is as important as the outcome, forming relationally aware peer enactments. It is a living art, exploiting contemporary forms of digital and physical networks as a mode of open praxis, as in the Greek word for doing, and as in, doing it with others.” – Garrett 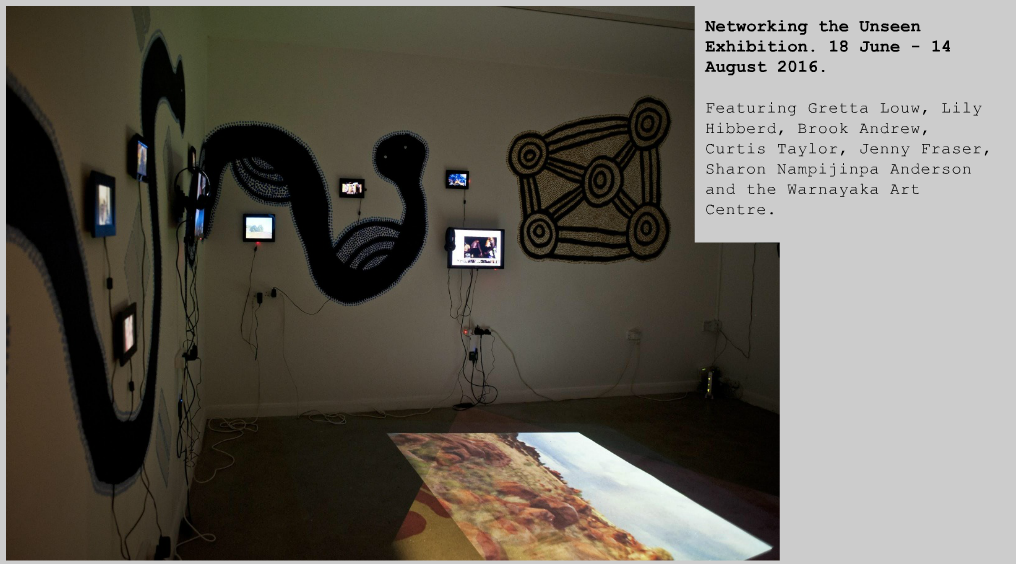 In the live conference with Marc, the issue of the internet and social media was brought to light. He discussed the importance to make the line between marketing and social utopia fades, the strategies big companies did to eliminate local characteristics, so as to bring their platform to even the remote places o the earth. Project Networking the Unseen served as an important opportunity to put a spotlight on resolving the issue of cultural differences, and that we can use technology to communicate no matter our locations.