1.  Why did you choose this space or object to photograph? 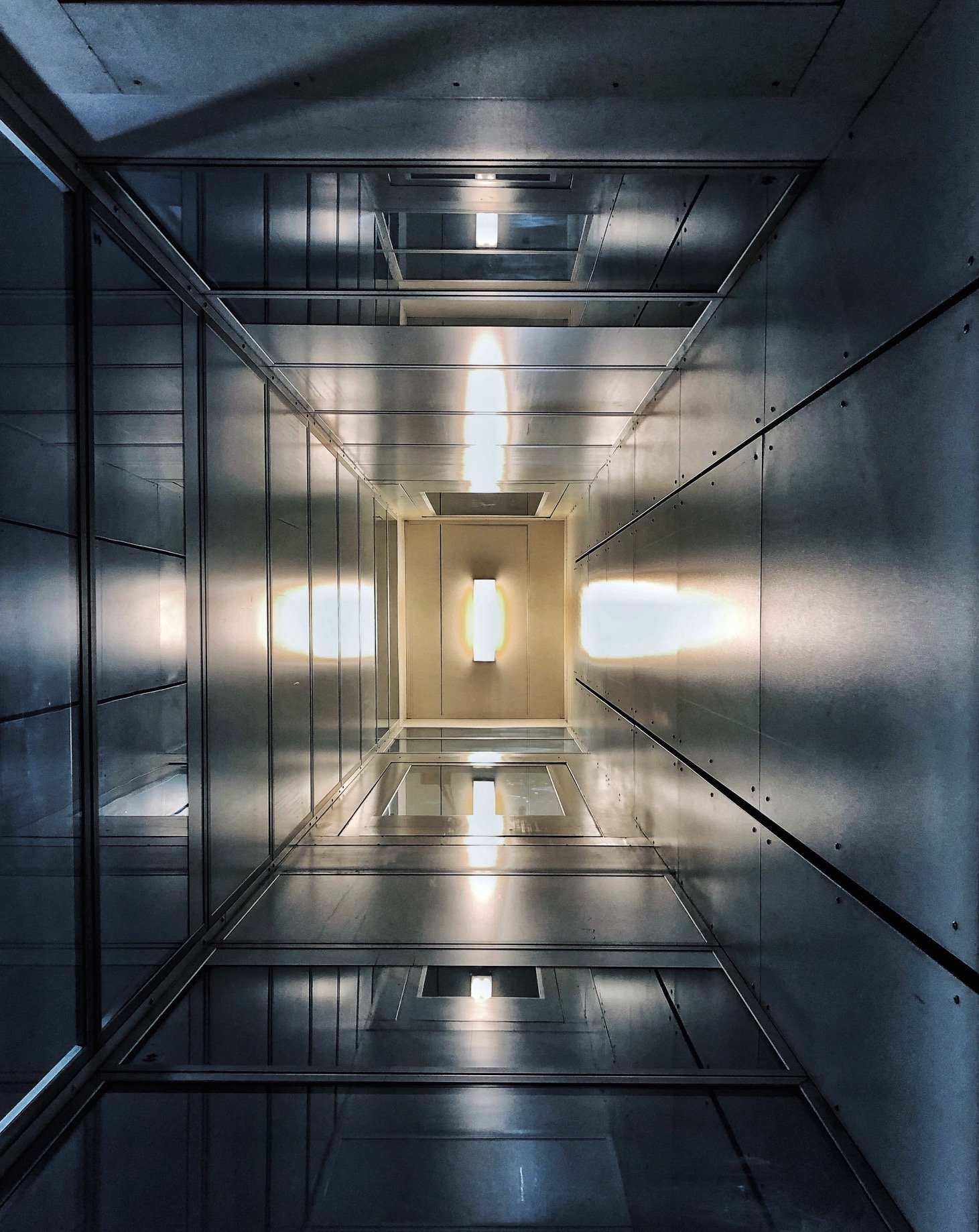 Whether or not you had taken this lift before, somehow or rather you would have walked past this space before. Not many people use this lift. The minority who chose to use this lift has a certain personality only a few could understand, and those few are the ones who use this lift. I am one of them. There are so many reasons on why one shouldn’t use this lift: it is for the handicapped, there are two proper lifts at the lobby, it is slow like- and the list goes on. But, we still use it. People whom I’ve met while taking this lift together seemed to be able to click with me instantly, probably because of the similar mindsets we possess and our indifferent attitude towards others, which is the certain personality I was referring to earlier. What mindsets you might ask? If you know, you know. Hope to see you at that space sometime soon, only if you belong there.

2. What are some of the characteristics of this alternative virtual space you had created collectively?

A visual without explanation could have endless meanings. Scrolling through #1010adm, there was nothing new or interesting if we were just talking about visual wise- how creative could one get when we are bounded by only the school compound? Classrooms, library, study tables, or a cozy corner somewhere in the school.

However, if the Artist decides to explain the meaning of the visual he or she created, we as the audience could then see the true colours behind the Work of Art. In this case, the Instagram captions are the ones that make the difference. After reading a few posts, I came to the conclusion that there is a form of solidarity and coherence amongst us ADMers. We might not express as much when we are interacting in real life, but through this virtual space, the sense of unity and unanimity brought all of us to our consensus as one. Something that one could never escape in ADM- working day and night, rushing and completing the projects given to us. 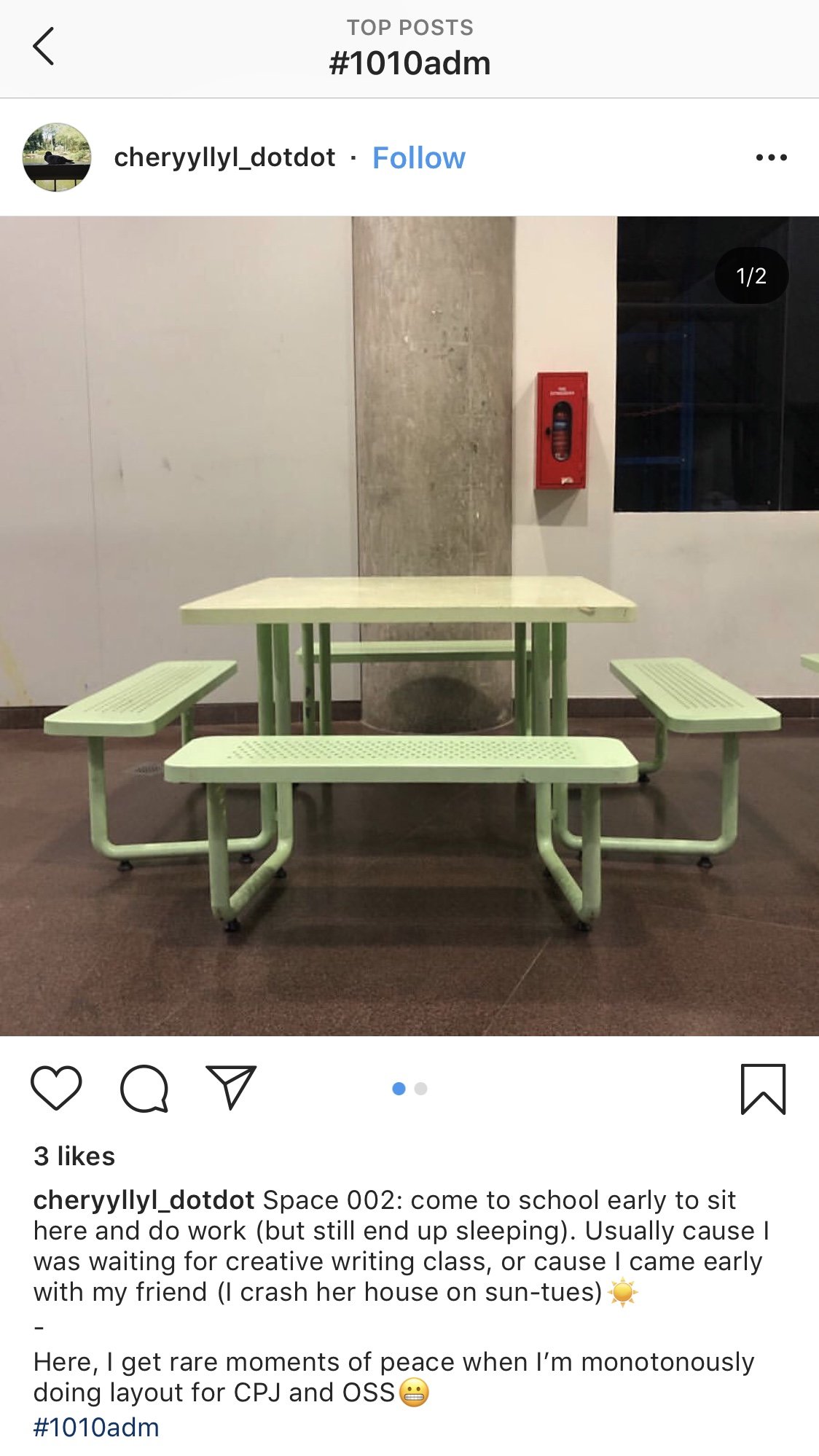 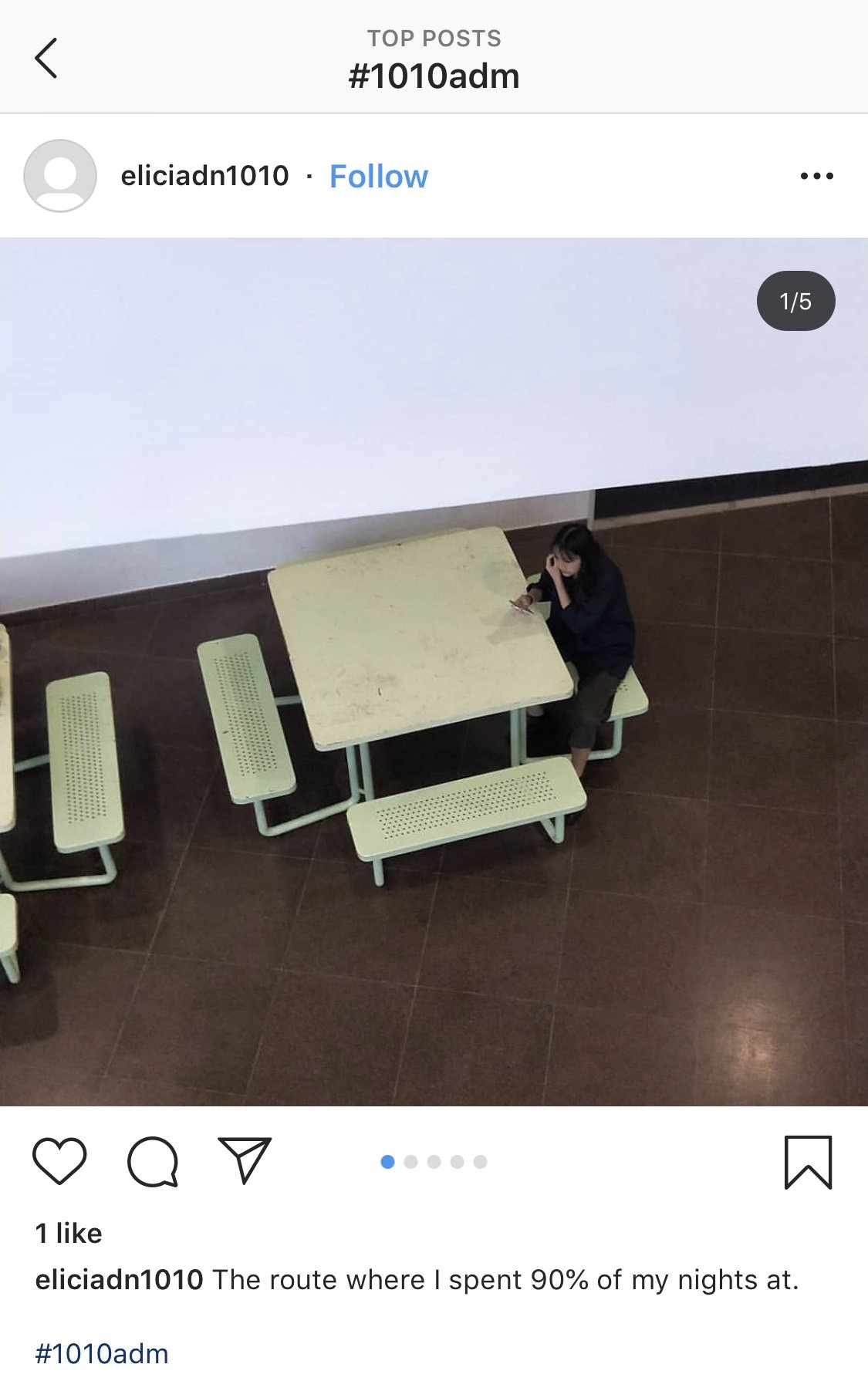 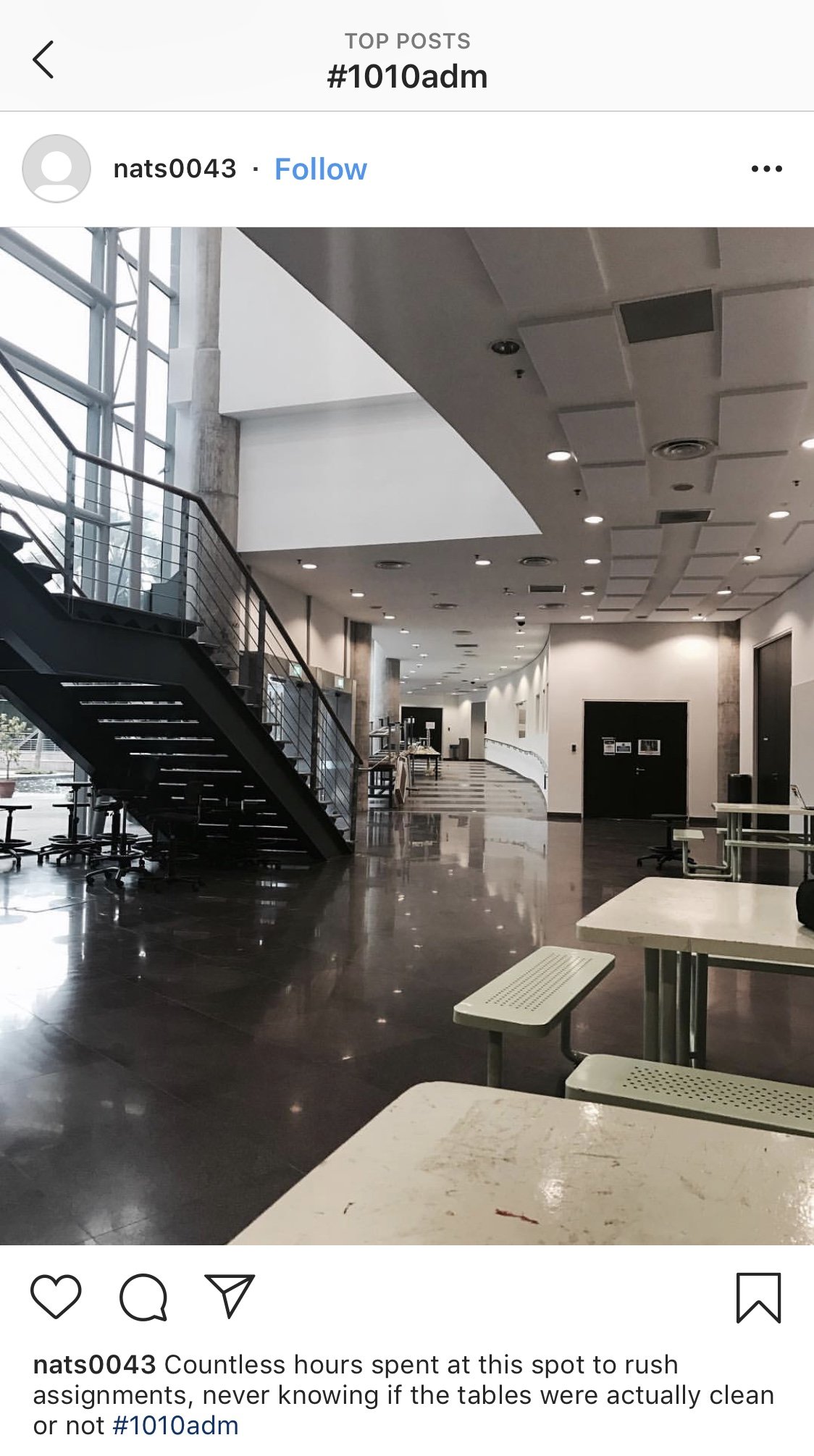 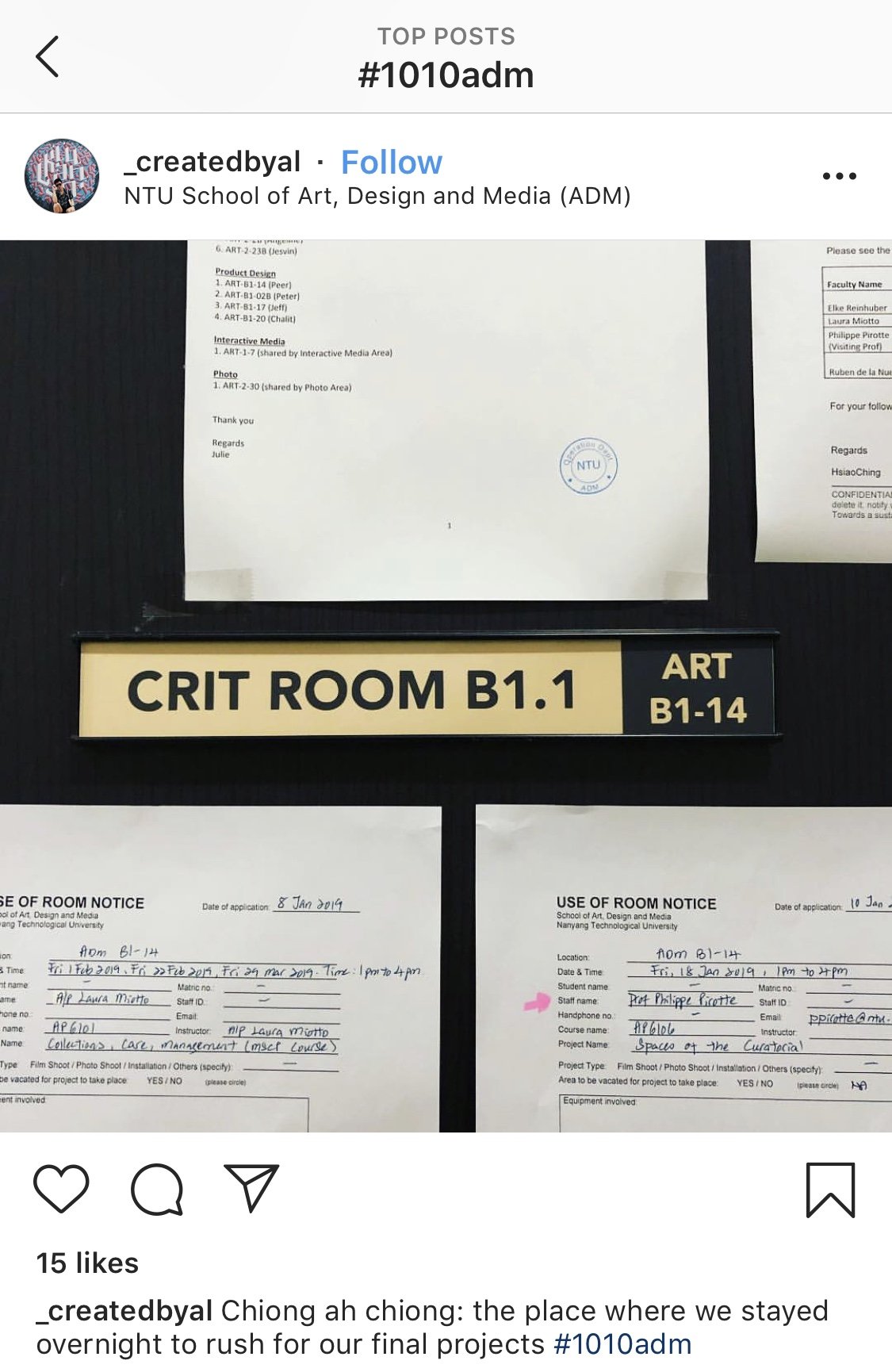 Its wild though- us in this generation, being able to communicate better only through the virtual life. Good or bad, at least there is a platform where we can finally form a virtual space to share thoughts where everyone appreciates each other.

3. Under what circumstance will this alternative virtual space change?

I felt that this alternative visual space has a lot of similarities to “Cut Piece” by Yoko Ono, the Work of Art that we were tasked to discuss during our first lesson in Experimental Interaction. This alternative virtual space acts like Yoko Ono’s clothes. We, the audience, are the one executing physical actions, which transforms the Work of Art. One might argue that Yoko Ono also played a part as well, which was her ignorance towards this whole process. By not reacting or doing anything, it allowed the audience to transform the Work of Art freely. 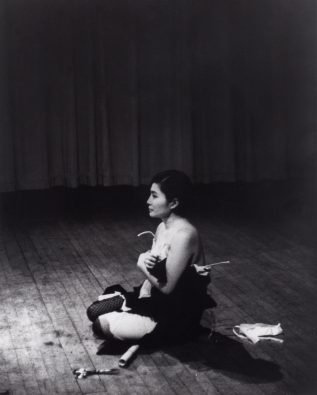 Similar but not so similar to this project of “Creating The Third Space”, we (my classmates & I), are the ones who changed the virtual space inside Instagram by taking photos and posting it up with our own personal captions. The only difference is that Instagram isn’t real- it doesn’t have feelings, and it would not be able to make any decisions as it is just an Artificial Intelligence (AI), if we were to compare it with Yoko Ono. Therefore, I can conclude that we are the only ones that played a part in changing this alternative virtual space inside Instagram. Without us, the virtual space stays the same, cold and empty.

4. How does this project relate to what we discussed in the lecture regarding co-creation, the concept of Do-It-Yourself (DIY), Do-It-With-Others (DIWO)?

My personal definition for the three main concepts comprising of co-creation, Do-It-Yourself (DIY), and Do-It-With-Others (DIWO), are:

Co-creation: Creating something yourself, together with the aid from others.

DIY: Creating something all by yourself.

DIWO: Creating something together with others.

Here is how I view this whole project of “Creating The Third Space” with regards to the three main concepts:

The notion of us going around ADM to photograph a space or object is DIY, because everything is done personally. From sourcing the location, to taking a photo, and then uploading it on Instagram are all done by our own physical actions.

The co-creation then starts here, when we write our own captions with #1010adm hashtag.

Lastly, the DIWO is the part when all of our photos are directed into one virtual space as one after tagging #1010adm in our own photos. In this virtual space, all forms of interactions happen- all of us are free to comment and like on each other’s photos.

This is when the virtual space starts to alter and mold itself according to all our actions, creating a new alternative virtual space there and then.