For those that were born in the mid-1900s, who would’ve thought that technology would have advanced so much in this age of era? And what is more interesting is the fact that all these advancements are done in just 50 years’ time.

The growth is an exponential one, where the improvement in technology started to rocket sky high once scientific discoveries have been found during the late 1900s/early 2000s. This profound progress in this automation field is so mind-boggling – isn’t it both compelling and overwhelming at the same time, knowing that machinery and robotics are able to accomplish so many things, or in some instances, carrying out decisions like real-life humans, just like us?

Automated /ˈɔːtəmeɪtɪd/ means to be operated by largely automatic equipment.

A utopia /juːˈtoʊpiə/ is an imagined community or society that possesses highly desirable or nearly perfect qualities for its citizens.

Automated utopia, is a term that is split into two parts: Automated & Utopia. Bringing these two words together, we get automated utopia, which means an imagined community or society that possesses highly desirable or nearly perfect qualities for its citizens that is operated by largely automatic equipment. The word automated is a rather broad word. It can mean both virtual and non-virtual automation. Things like robotics are physical, while things like machine learning, algorithm, and AI are immaterial.

In this reflection essay, I’ll be talking about automated utopia, a presentation conducted by a guest lecturer, Bin Ong Kian Peng, co-founder of supernormal.sg, an independent art space that strives to present experimental and offbeat works and projects, ranging from design to artistic practices, and the in-betweens. Bin gave us many new viewpoints to artificial intelligence and machine learning. However, does automation always lead to utopia? Or does it also lead to the dark side, dystopia? Let’s find out.

Machine learning algorithms use statistics to find patterns in large amounts of data. The data here encompasses a lot of things, such as numbers, words, images, clicks, and the list goes on. If it can be digitally stored, it can be fed into a machine-learning algorithm. Machine learning is the process that powers many of the services we use today – recommendation systems like those on Netflix, YouTube, and Spotify; search engines like Google and Baidu; social media feeds like Facebook and Instagram; voice assistants like Siri and Alexa.

Bin shared with us a few movies that are automated-related. They include the famous The Matrix Franchise, William Gibson: Necromancer, and Eagle Eye. I assume that most of us have watched The Matrix before, but that movie might be a little too far-fetched, it is more of a science fiction action show. However, Eagle Eye is the total opposite – it is fully possible for the storyline in Eagle Eye to happen right now, in this current generation we are living in. 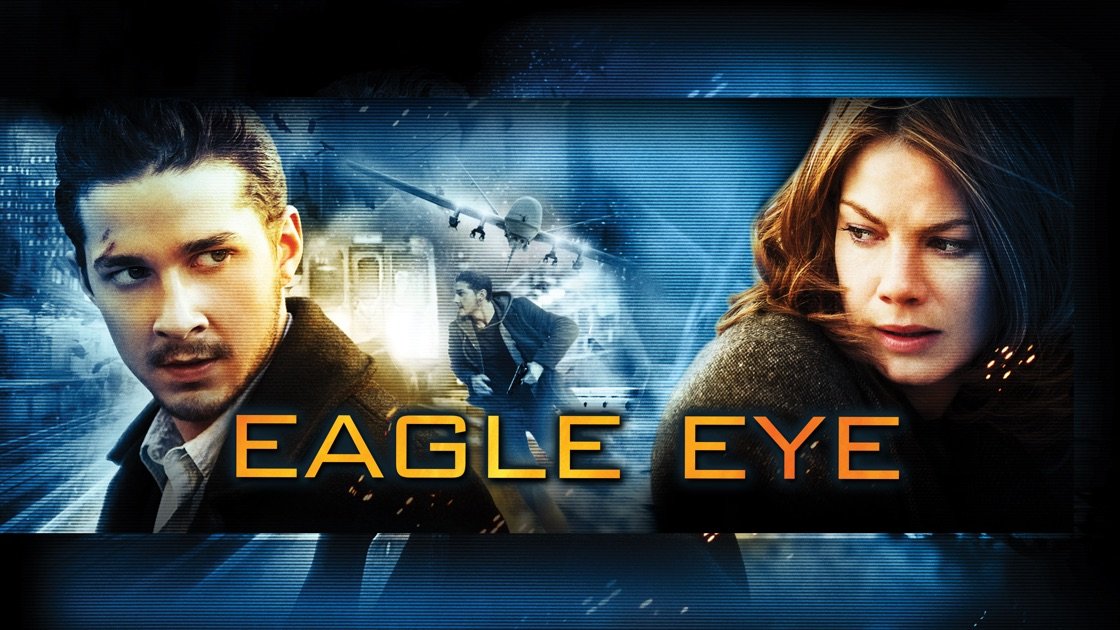 Having watched the Eagle Eye, the Autonomous Reconnaissance Intelligence Integration Analyst (ARIIA) is the main antagonist of the movie. It is a computer system created to help locate terrorists, but later comes to believe that America is bringing itself to destruction after mistakenly attacking an incorrect target against its protest. It begins working of its own accord to wipe out the cabinet and uses influences on technologies and computer systems in order to do so. 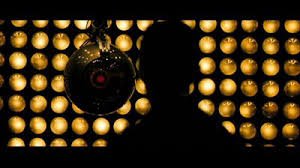 In layman’s term, ARIIA can bluntly be considered as a search engine and recommendation system that works together to produce the final arrangements and judgements. In such instances, these are machine learning within that of big data analytics, with the corporation of AI that generates decisions that are then being placed into actions. Yes, the movie does get a bit too unrealistic, when it comes to the operation part where ARIIA pushes Jerry and Rachel into a series of increasingly dangerous situations, tracking and controlling their every move. However, machine learning like ARIIA is already something that is happening, or rather placed into use in our society. I’ll be talking about this in the next segment.

In this age of information, algorithms are used to handle the massive amounts of data produced daily. They can be helpful in a multitude of ways. One category of an algorithm is known as “risk assessment algorithm”. Risk assessment algorithms are used around the world to predict hot spots of violent crime and determine the types of supervision that inmates might need, or provide information that might be useful in sentencing.

Correctional Offender Management Profiling for Alternative Sanctions, or COMPAS, is an example of a risk assessment algorithm. It is invented by Equivant, a company owned by Tim Brennan and Dave Wells. It aims to objectively predict recidivism risk by examining factors like a defendant’s criminal record to assess how likely they are to be arrested again in the next two years. Recidivism is defined as the tendency of a convicted criminal to re-offend.

“Could a deep-learning system sustain the autonomy of nonhuman ecological processes at designated sites without direct human interventions?”

This real-life example rather than a movie’s storyline. This then raises the question of how much we can trust algorithms to make decisions for us. Yes, there have been several studies showing that algorithms can be used to a positive effect, but algorithms can still discriminate. As such, I feel that human interventions are still necessary, and we cannot fully rely on deep learning and algorithms at this stage.

In one segment of Bin’s lecture, he shared about robotics on different platforms. Doomsday Book: Robotic Buddha touched on the topic of religion; Co(AI)xistence with Mirai Moriyama & Alter touched on human intelligence through; while Choy Kafai: Unbearable Darkness- A paranormal dance experience, touched on art.

“What will be the role of humans in a future AI-driven world?”

It was intriguing how in our modern technological advanced societies, robots have slowly become more and more prevalent. Although those examples given by Bin are more on the extreme sides, do we realise that most robots around us are ‘invisible’, and they are parts of our everyday lives like our laptops and transportation systems. One apt example would be the country, Japan.

Have you heard of the word “monozukuri“? Monozukuri is a term that has been used since the end of the 20th century to describe Japan’s manufacturing industry. The concept of monozukuri covers everything from the production techniques, frameworks and philosophies that support the manufacturing industry and the products that are created through these processes and systems, to the individuals (craftspeople and engineers) who create these products. Monozukuri has long been the source of Japan’s international competitiveness. And in recent years, robotics has been the driving force behind Japan’s monozukuri culture.

In the past, the main places industrial robots could be found at work were factories for automobiles and electronic equipment. With the aim of freeing humans from rigorous labour, the use of industrial robots became widespread as they performed simple jobs such as assembling parts and physically dangerous work such as transporting heavy items in harsh and hazardous environments. As global trends show the roles of robots growing ever greater, the “Robot Nation” of Japan is putting to use cutting-edge robotic technologies in a variety of fields besides manufacturing while keeping in mind societal demand.

Robots are now working on the front lines in a diverse array of areas, including aeronautics, medicine/welfare, disaster mitigation, disaster investigation and rescue. Here are some examples: 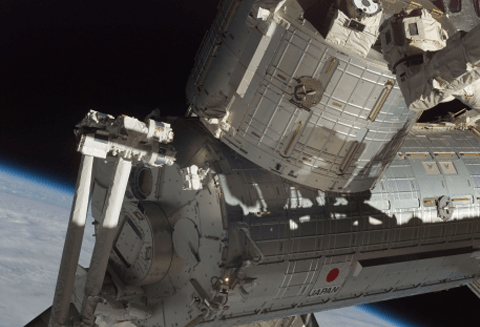 The Kibo Experiment Module attached to the International Space Station 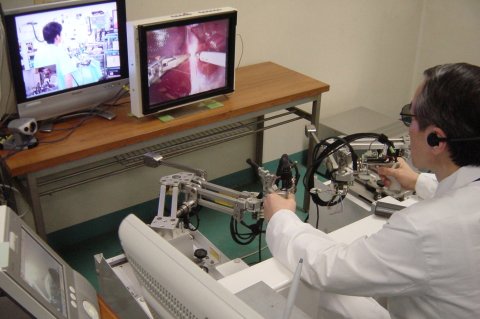 A surgeon operating the master manipulators 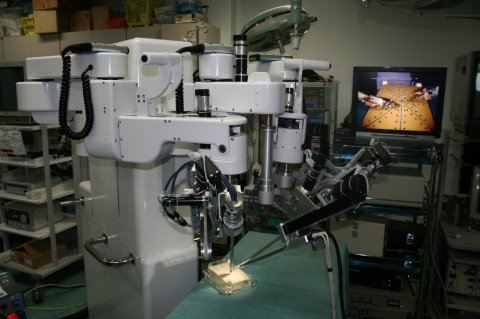 Slave manipulators, which interact directly with the patient and are located remotely from the surgeon

Serious stuff aside, automation and AI can also do useless but fun and interactive things like this:

This is a janken (rock-paper-scissors) robot that has a 100% win rate at the game. An example of a human-machine collaboration system, this robot uses high-speed vision to recognize the position and shape of a human hand once every millisecond. The robot then forms a hand that will beat the shape the human hand is making. 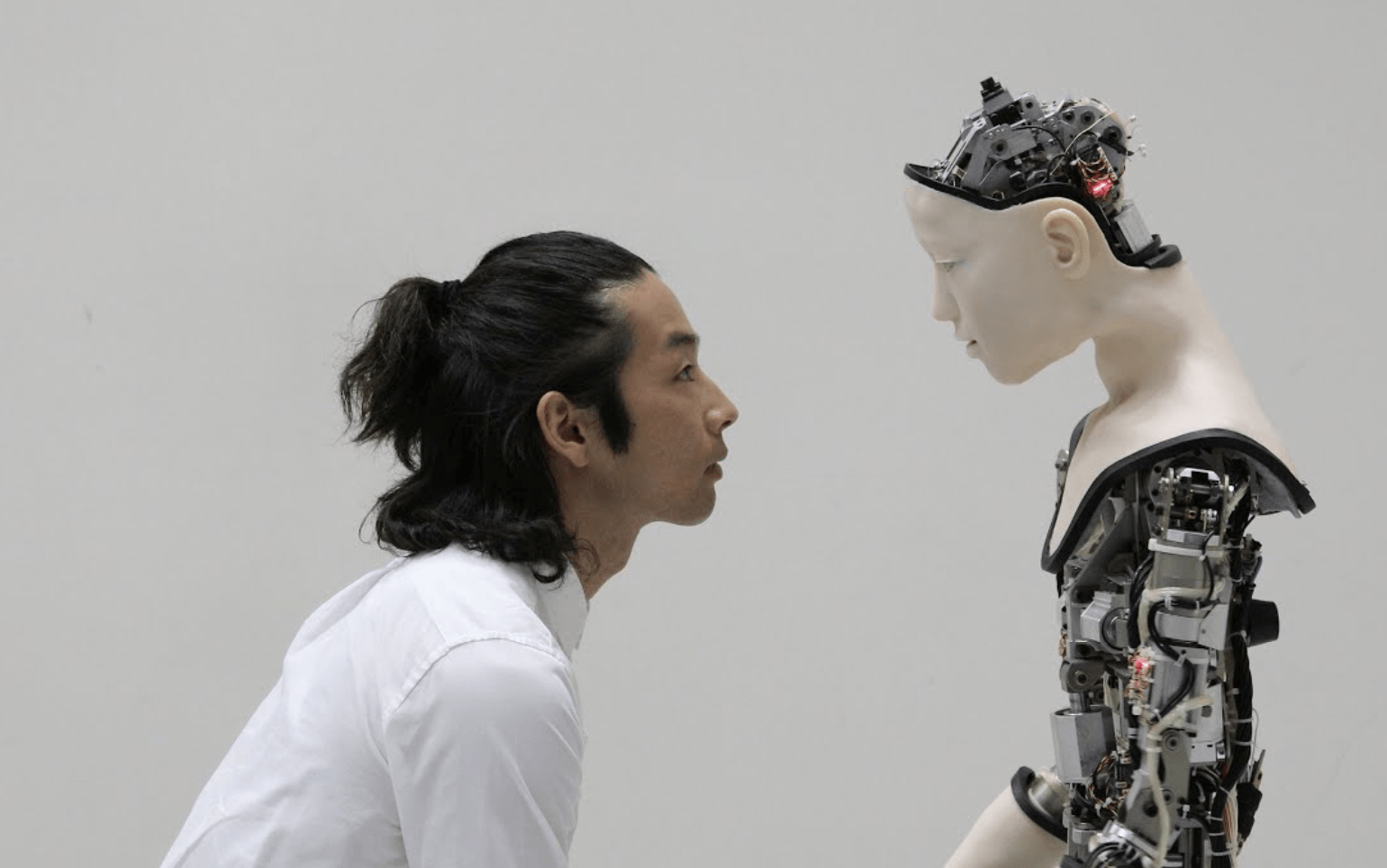 Robotics can also be seen in art, like Co(AI)xistence with Mirai Moriyama & Alter, the work of art that Bin mentioned. Co(AI)xistence explores communication between different forms of intelligences: human and machine. Through signals, body movements and spoken language, she created the interaction between Alter and Mirai Moriyama, a Japanese performer. Using a deep learning system, Alter learns from his experiences and the two try to define new perspectives of co-existence in the world. 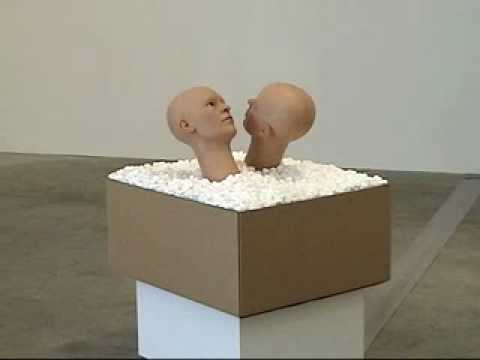 This work of art very much reminded me of another work of art that my professor, Dr Dejan, shared in class. Its called: If/Then by Ken Feingold. Such works of art explore the new relationships that are established between our lives and technology. I did a short chapter on this artwork in my other post, you can view it here:

“So how can AI present a different world than that of the cyberpunk genre and give us a technological utopian society?”

It is clear that more time and progress is needed in order for such AI to understand the given data and be relied on entirely. AI has the potential to provide us with the most accurate and fair answers – to deduce who could be a repeated felony, to calculate the best opportunity cost, so on and so forth.

At this point in time, I do not believe that AI could fully present a technological utopian society. I gave a few examples on how reliance and dependence on technology could also lead to a dystopian society, where suppression and human misery would be present. Hence, we need to make sure that these tools are accurate, to begin with. If not, then they’re not fair to anyone.

However, there are notable and convincing breakthroughs, such as the examples I gave on Japan, which shows that technological advancements would be able to thrive in eventually in the future, but it would take an abundance of time, effort, and most importantly, patience.