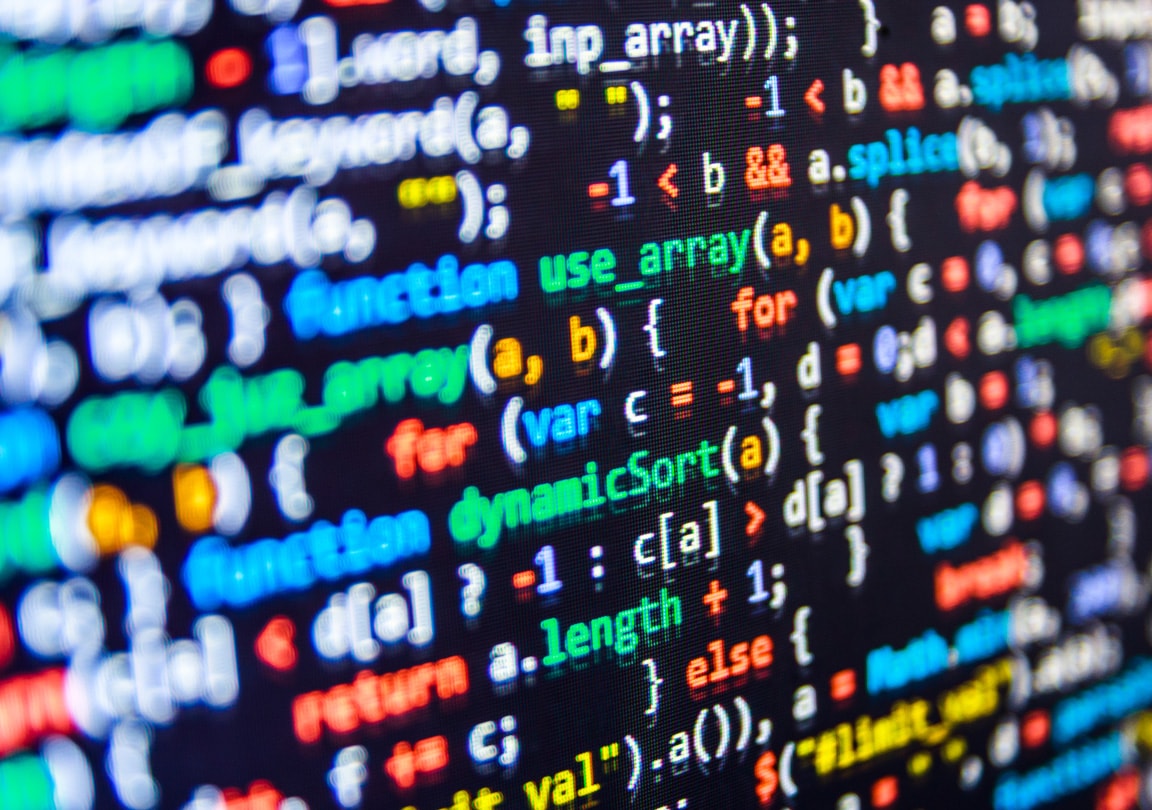 In this essay, I will talk about the 5 principles of Interactive Media that was mentioned in “A Review of the Language of New Media” by Bradley Dinger’s, followed by my thoughts on them and how some of these 5 principles can be applied to my group project “Confessions”. This is to have a better understanding of Interactive Media art/new media and how it also relates to the process and the work my group is doing.

The 5 principles that were talked about are:

What I understood of numerical representation in the reading, is that it is composed of digital code hence a numerical form — altogether a new form of art. And behind achieving this new media art, there needs to be a conversion of continuous data. To simply put, using the translation of code to create a new media art. That is called digitalisation — consisting of sampling and quantization. Data is first sampled normally at regular intervals and then each sample is quantified. I see this ‘numerical representation’ being applied when our group does a bunch of coding 1) to create a space for participants to type out their thoughts 2) and also having those thoughts displayed on the screen by having another computer reading the input. Behind all this, we break it down to the sampling and quantization which I feel is similar to how the variables we put in Arduino’s Loop function is run through multiple times per second and translated depending on how we code it.

Modularity is the fractal structure of new media, explaining that each element or even the unit that an artwork comprises in new media can be edited without affecting the essence of the artwork. It will still maintain it’s identity and independence. In contrast with traditional media, the parts of an artwork on new media, for example, an image ungrouped in Photoshop, can be accidentally deleted but not rendering the entire artwork meaningless as they can be substituted with a click of a button.

Now linking this to my group’s project, the first aspect is 1) the words displayed can be easily edited, similarly to the aesthetics of it (the background behind the words, how the words could be shot down, etc). Depending on what we code, we can change all that. And that is only the programming aspect of our project. The physical part involves the changing up of aesthetics in the two rooms we are using and doing so without affecting the code. However, when it comes to the coding aspect, I can’t help but question whether it could be debatable because when one takes out or forgets a simple instruction such as “function” or “delay(1000)”, the whole new media artwork is a mess and sometimes it doesn’t even function. 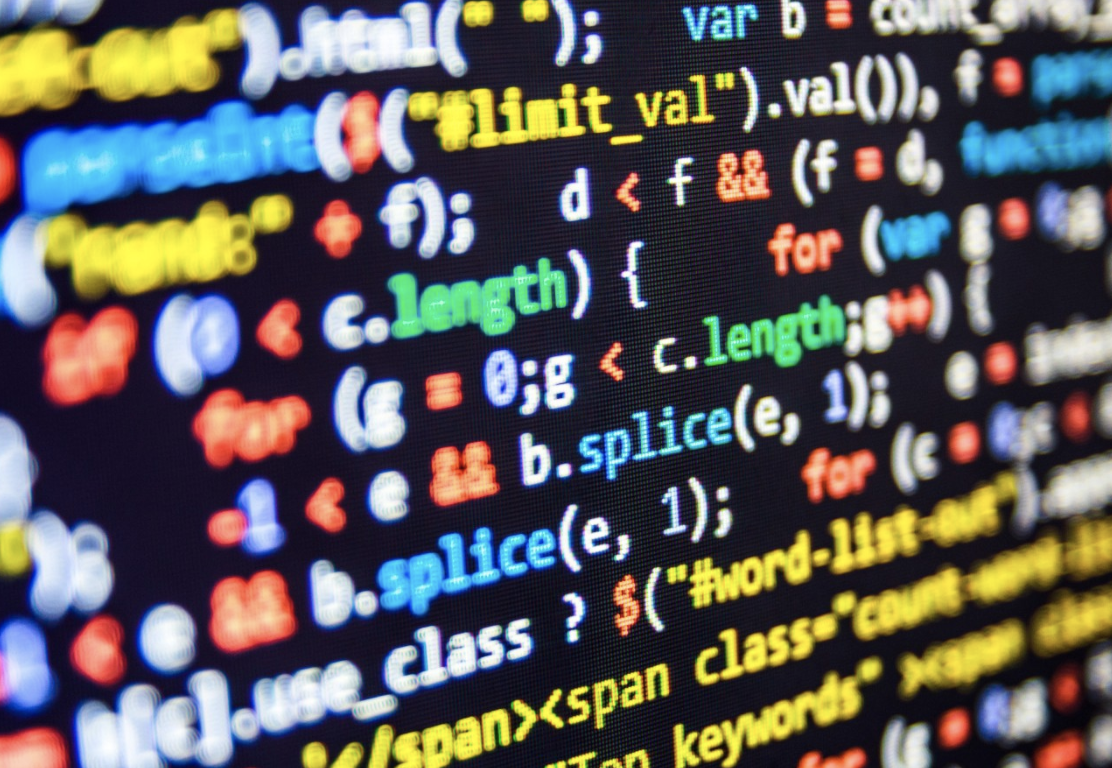 To me, that’s counted as a meaningless work if changing little things like that is a problem to create a work that keeps it going (perhaps example a moving dog prototype). But maybe the whole point of this is to tell us that with new media, anything is possible with the fact that it could be edited very easily and any mistake done, can be undone.

Automation comprises of the first two principles mentioned above. It is simply the idea of an artwork being able to run by itself. A complex computer program can automatically generate 3D objects such as trees, landscapes and humans. This is seen in some Hollywood films that use Artificial Life software and we see that in movies such as Black Panther’s Afrofuturistic society and Wakanda setting (seen below). 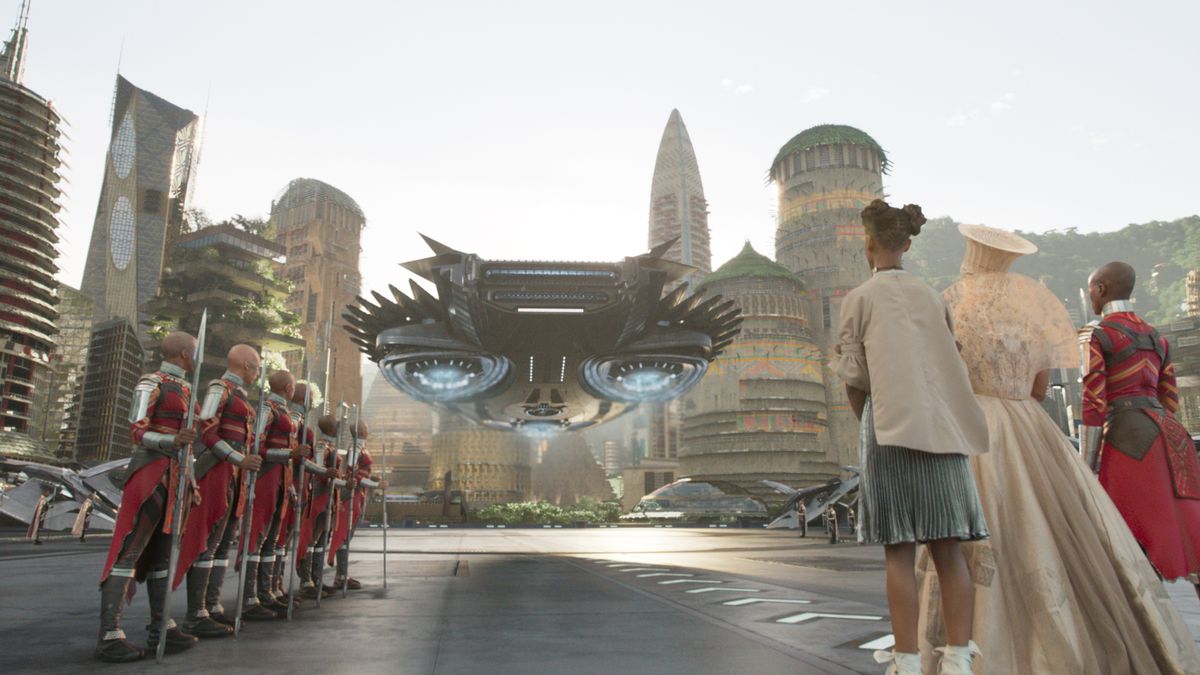 Automation is applied to my group’s project where the code will constantly and automatically check whether there is input in the forms of messages from the participant and when there is an input, this message will be displayed.

New media is characterized by variability. Here we learn that a new media object can be in many different structures and it can have one or more interface to a multimedia database. This can be seen in Hypermedia structure where it specifies a set of navigation paths (connections between nodes) that potentially can be applied to any set of media objects. Another is such as a Crowd-sourcing artwork. Example: a world clock updating every minute with pictures of numbers found in environments, being uploaded by people from around the world. It is always different in different instances as it involves input from the audience to function as an artwork. Therefore in my group’s project, the artwork is constantly changing as the outcome changes depending on participant’s decision to destroy the words they have typed out and shown on screen, or they choose not to but somebody else might do it.

Transcoding is crucial in an interactive artwork (at least, to me it is). To transcode something is to translate it into another format and this can sometimes stimulate the audience’s minds, to think and reflect. Here, “cultural layer” of transcoding tells us that the audience has a new perspective on the topic of the artwork as it is being represented with technology as its medium. An example would be the creation and usage of VR (visual reality) in Sony PlayStation games so that it allows gamer(s) to have an immersive experience by having a simulated environment. 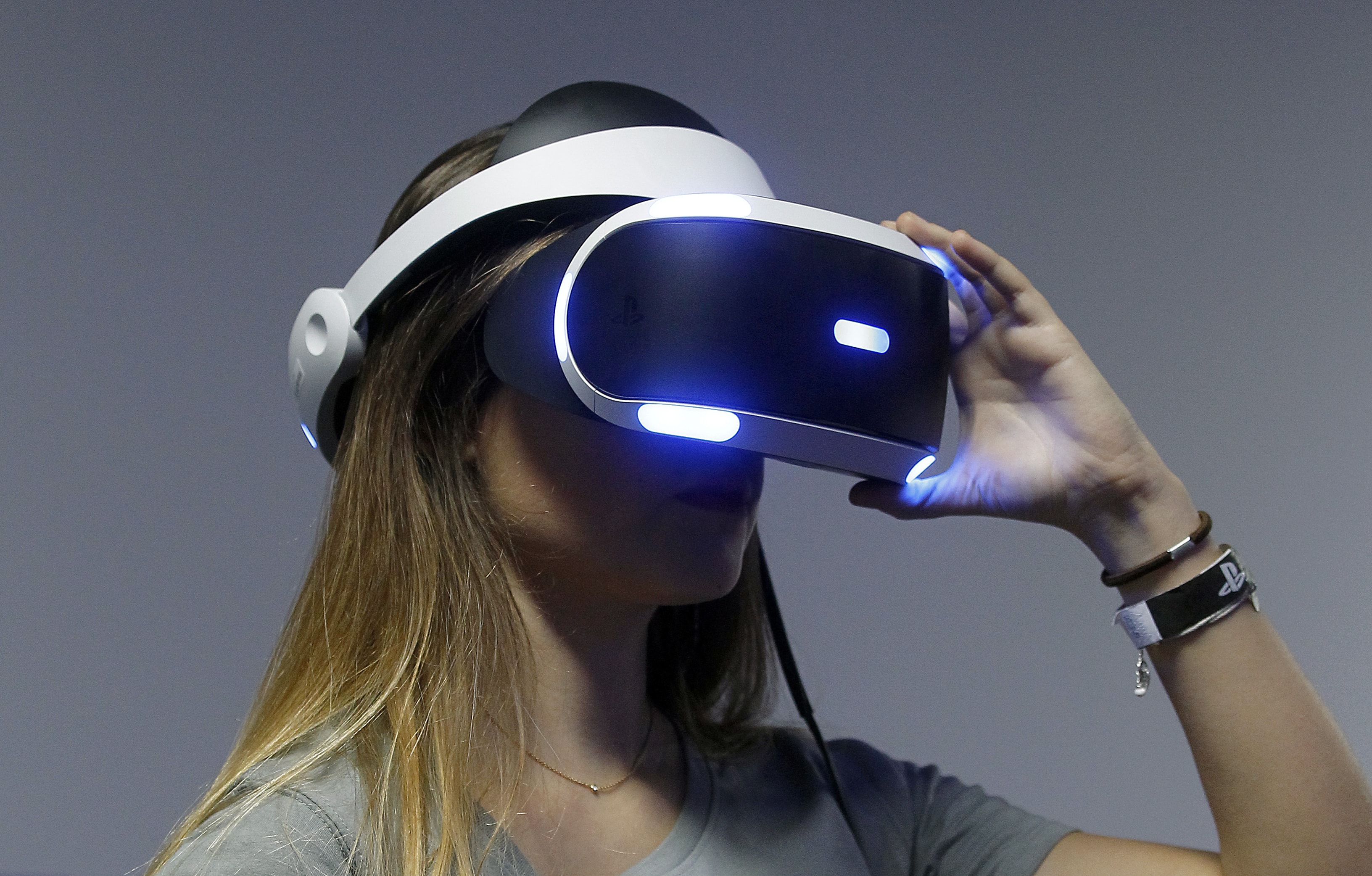 My group is transcoding the interstice of thoughts and representing it as space through the use of a computer, that can be interacted with. Relating back to this project under the theme of “Interstice”, everyone in the class is transcoding a form of interstice, just in different ways and each one of us as audience experience something new from each group work as well.

In conclusion, with the use of technology, it changes our work by making it a “larger” thing, amplifying the thoughts, more than what it simply is and putting it out there for everyone to see.

Stepping into the site and immediately hearing the ambient ocean sound, it pulls you further into the artwork itself.  It’s mesmerising as you soak yourself in what feels like an underwater world, having a glimpse of life under the sea. The blue and purple hue present in the aquamarine set-up complete with a school of koi and jellyfishes hanging on top, the flying thin plastics of what resembles the seaweed and glittering corals — it further contributes to the artwork itself and makes the audience want to fully immerse in it and never leave. Playing with the illuminating ocean colours (blue, purple, orange for the koi) and ocean sounds (like the things you hear in the movie Finding Nemo where whales make sounds) does make you feel like you are in a dream under the sea. This work truly lives up to its name, an Aquatic Dream it is.

Though, there are some things I feel that could make it better:

By far I still think this is my favourite out of the rest of the artwork/installations I have been to.

INTENSE. There was soft and slow music at the start and didn’t provide us with many projections of interesting visual effects that fully captures your attention UNTIL the music escalated. In the middle part, the music (which, I found out from one of the creators behind this, was created by them as well) got into a climax and it has wonderful space vibes as it goes along with the visuals of time and space (out in the cosmos filled with stars and planets). You get to explore the galactic wonders of the universe. That truly brought me into an immersive journey. It’s amazing to see it being projected against the Singapore Art museum walls. Makes you think how amazing what the prism of light could do. They also play with the speed of the visuals and that makes you feel like you are zooming in and travelling in time, going deep into the cosmos. It’s interesting how here, you don’t need to physically move around to experience this interactive artwork, as the visuals and lights and sounds (multi-sensory environment) have successfully managed to get everyone seated and immersed.

I like it a lot because of the concept of projection mapping, where “similar to video mapping and spatial augmented reality, is a projection technology used to turn objects, often irregularly shaped, into a display surface for video projection.” Because it is not on a flat screen and projected elsewhere on a 3D object, that makes the artwork more interesting. It shows how light can be mapped onto any surface and be made into an interactive display.

This was my first Singapore Night Festival experience. Overall, it’s amazing to see these interactive works, some I wish to make in the future! 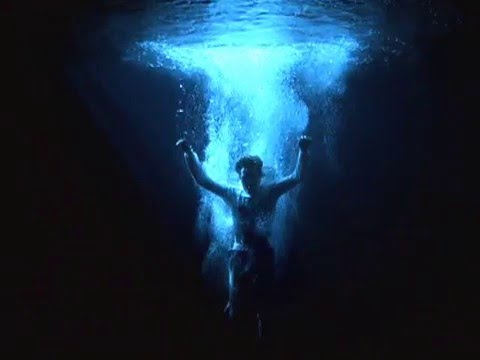 “The Passing” by Bill Viola.

Viola, placed at the centre of this personal exploration of altered time and space, represents his mortality in such forms as a glistening newborn baby, his deceased mother, and the artist himself, floating, submerged under water.

Looking into both these video art, a generative art in a way, they are similar in making us audiences feel immersed into the art, in a deep sense. We feel spiritually inclined or touched by the artworks.

We, our souls, feel deeply about it. He uses a total environment that envelops us, viewers, in images and sounds. The slow movement of water for example, and the droplets of sounds, the blackout room, and just you – to really get us involved, emotionally and I guess mentally.

“Everything in this room right now comes from somewhere else and is just passing through us at this moment and it will continue to live and grow. Ultimately we all come from the stars; our earth, our world, our bodies, our bones, mosquitoes are made from the stuff of the stars, literally, and it just keeps getting reconfigured. It’s a profound and very moving thing. ” Bill Viola Interview with ‘The Spirit of Things’–Radio National–Australia)

Do you think it’s important, as a viewer and also a creator, that we feel something so powerful, or at least feel something, after entering the interactive artwork?

That’s something to think about. But my answer to this, for sure, is a yes – it is highly important. You would want your viewers to be fully engaged with your work that when they leave that environment of the work, they leave with strong emotions, or thoughts.