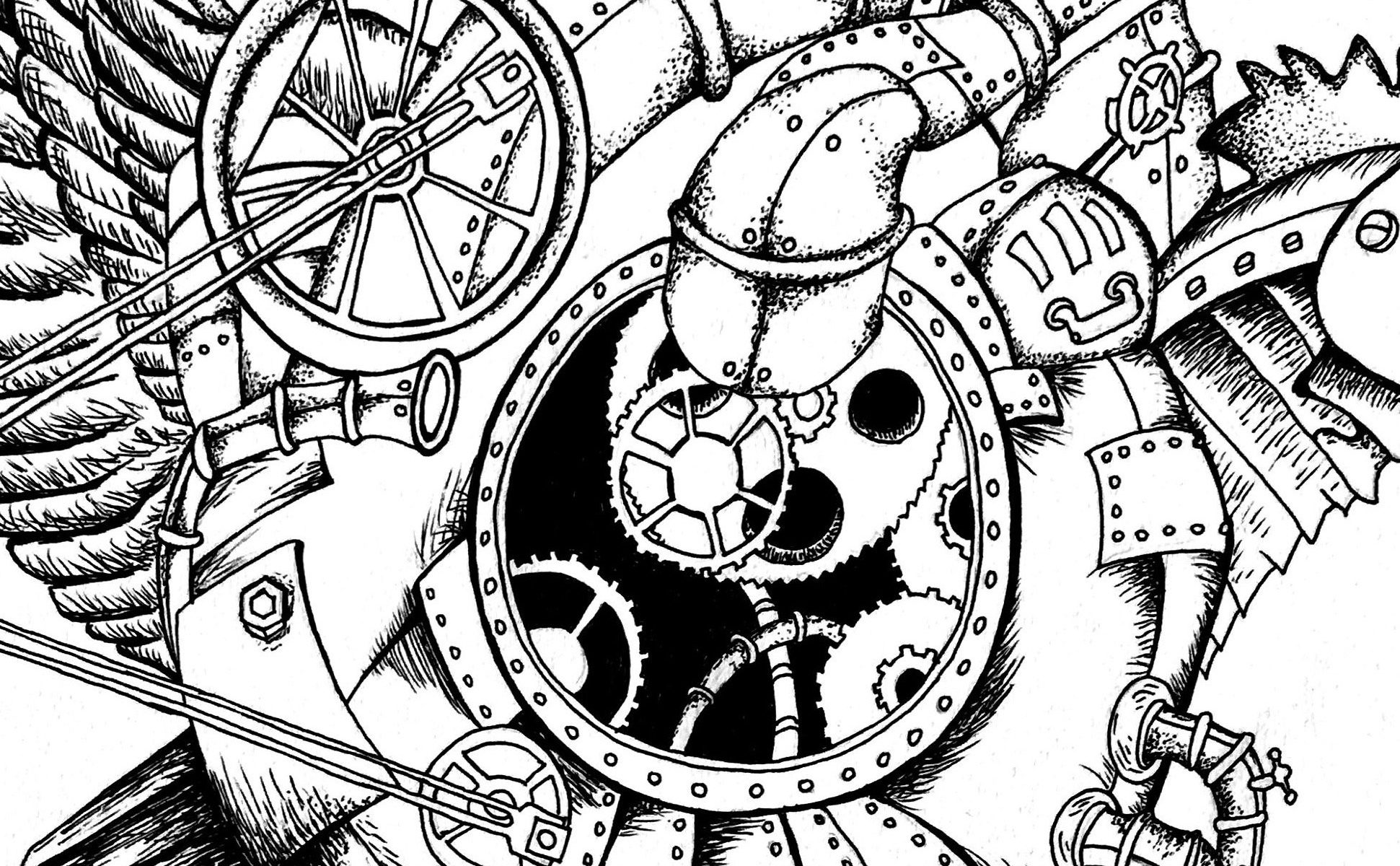 I partnered up with Aster and we began interviewing each other. These are the few questions I asked her:

Me: When was the last time you felt sad? Why?

Aster: It was over the death of my hamster. To certain people, maybe dogs are more important than hamster but I rely a lot on my hamster for emotional support. Hamster’s life usually lasts for about 2-3 years but mine died after 1 year 8 months – it was a difficult time but yeah. I couldn’t get a hamster ever since then. But only recently I got a bird 🙂

Me: Your biggest dream?

Aster: I’m hoping to hold down graphic design as a day job, more outside of that on publishing webcomics – looking to publish them! I’m starting to promote it this year, going to comic conventions and all to gather a following to get readers and have funds for my comics.

Aster: Animal! Films! I think the small things that people do. I used to be less receptive on what people do but as I age I become more sensitive. With things people do. Or even films that used to not make me cry, I watch them now and instead I feel more emotional. And even after reading a really good book or a good film – because ah shit it feels like the journey ended.

…..(after continuing convo and thoughts – this is something she said that kept ringing in my head too) and I think being vulnerable is more honest.

Me: What are the kinds of movies draws you in?

Me: If you could pick an animal as your spirit animal to relate to your inner personality, what would it be?

Aster: I could see myself as a bird, more specifically a chicken. It puts forward as something/someone important but yet an animal of prey. Or a lemur as it is fun, cheeky and playful.

So from the snippet of the interview above, you could see that I highlighted some of her words that gave me inspiration for my ideation. I drew out a few rough sketches. 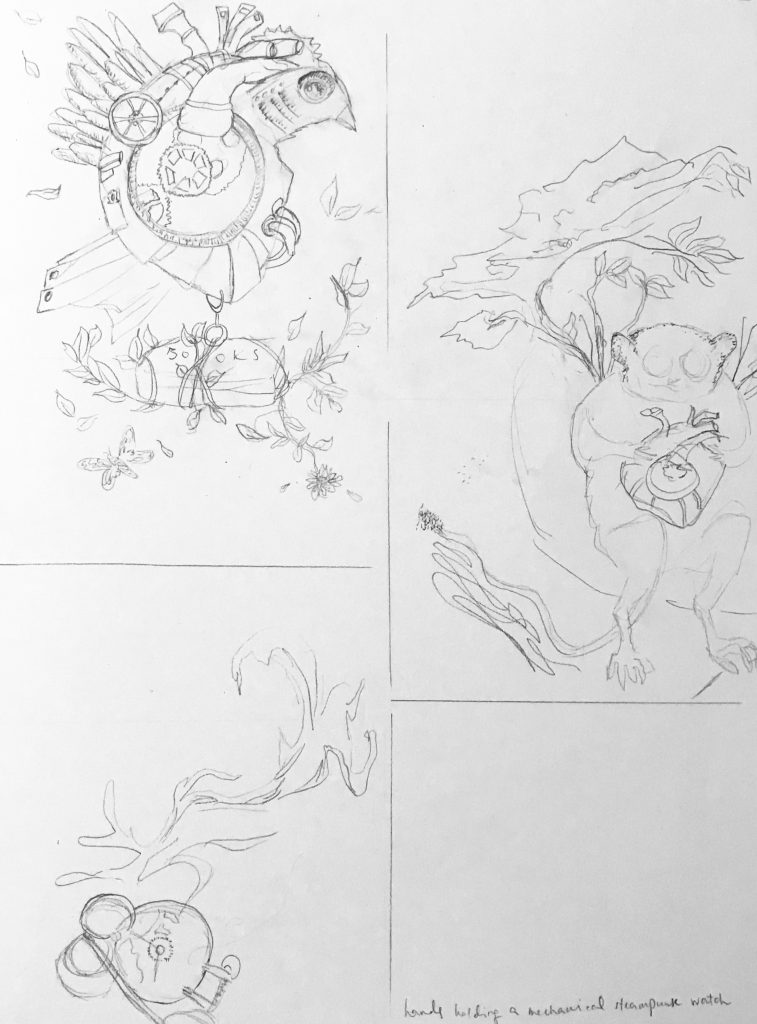 I decided to stick to the first and further develop on it. It has the qualities I see in Aster when we were talking. It didn’t feel like I was interviewing her but more of getting to know more about my friend. I know now she has a big heart and soft at times (just like me!) and that is okay. She loves fantasy things but mainly into the cooler mechanical aspect such as Steampunk, hence I use that as one of my biggest inspiration for the sketch. (see below to know what stuff makes ‘Steampunk’ – complicated machinery and such) 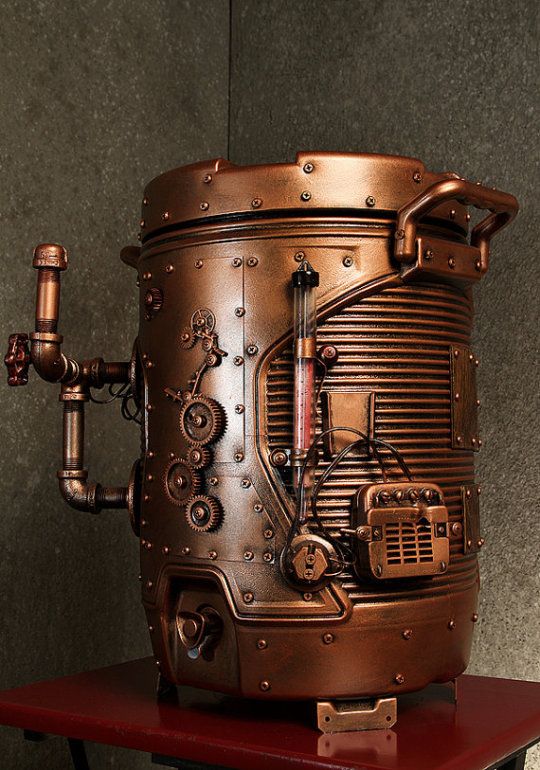 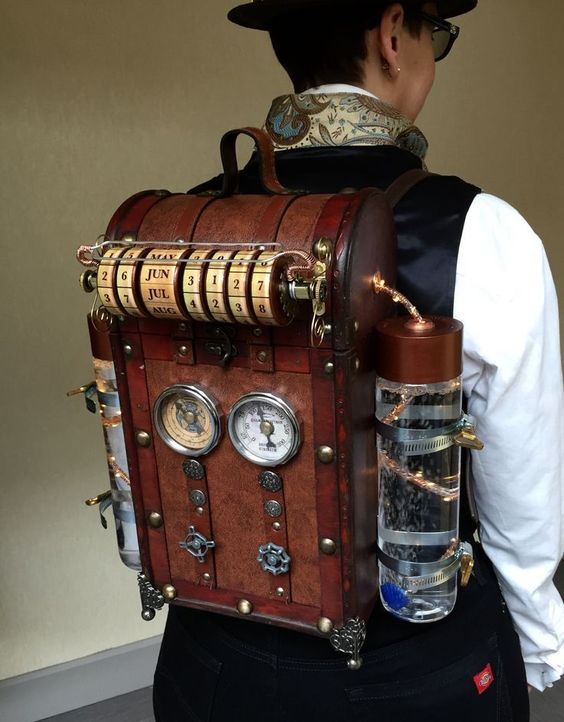 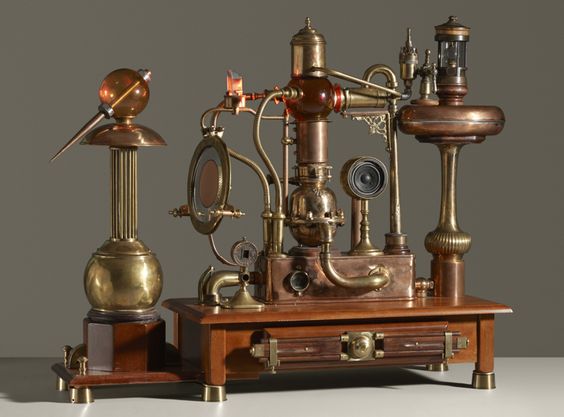 Aster also showed me some of her favourite works. Most of them are comics, graphical novels such as the ones below.

Some are really cool animes.

And even interactive illustrations which you can check here: http://www.sbs.com.au/theboat/

What I notice from all of her favourites is that they have a similar touch to their styles: and it is the focus on shadings, as well as lines. That became another inspiration to my stylised drawing of her portrait.

So I began drawing before inking them. The reason why I decided to do traditional for hers was that I could then easily create texture/shade with ink. I wanted to create shading using the dotting method and lines. 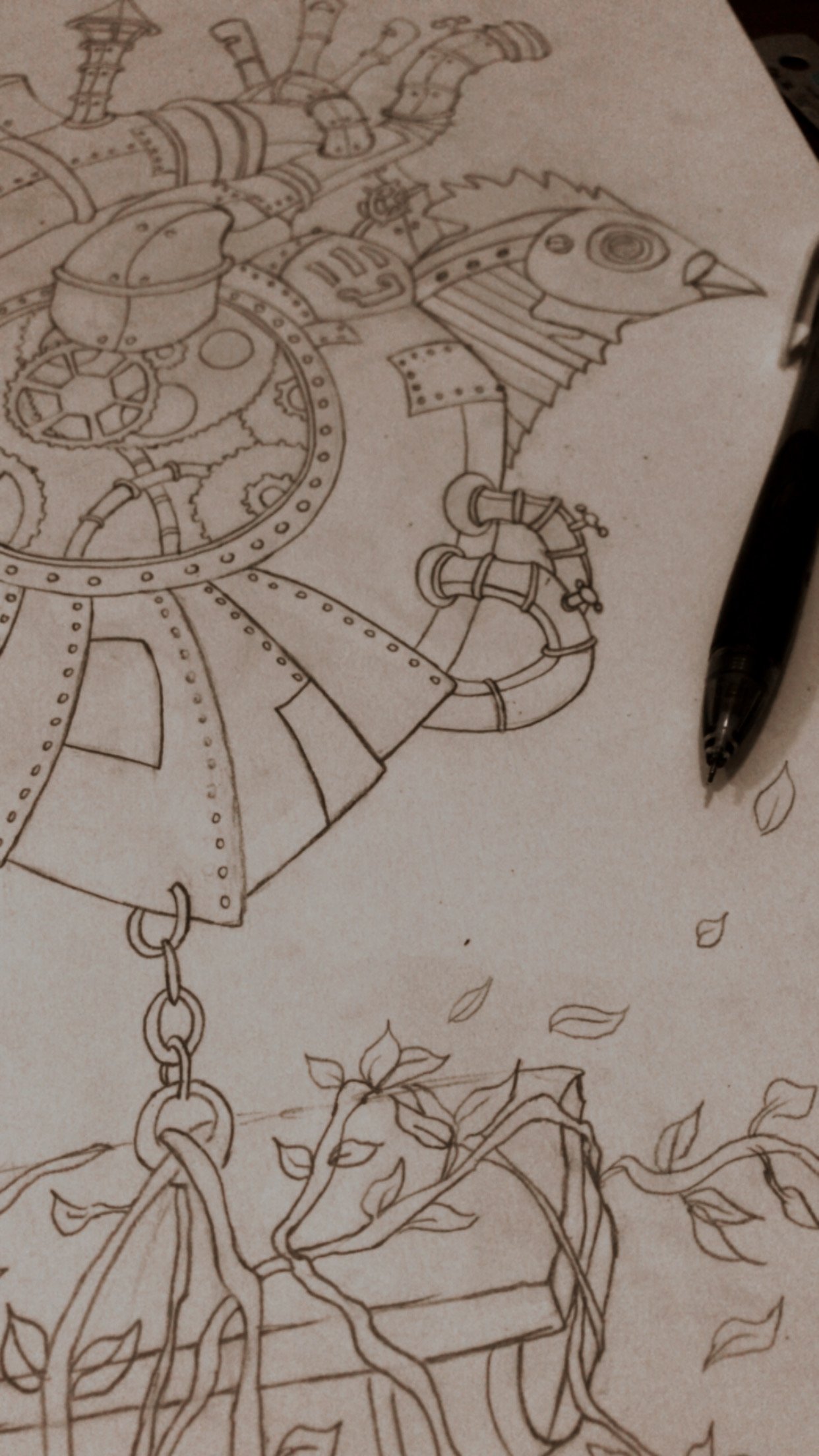 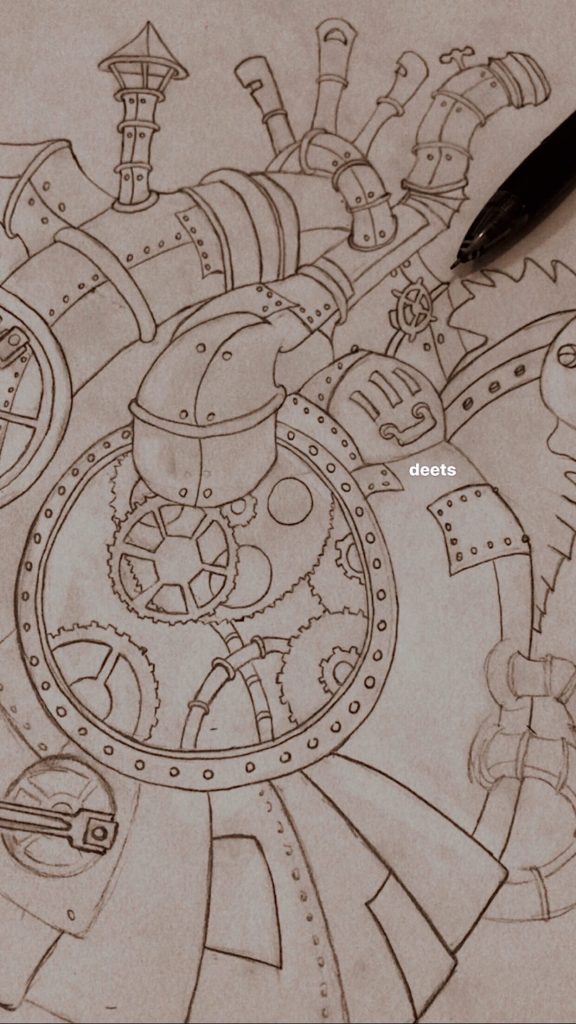 As seen below, I use lines as well to create the shades in certain parts of the ‘machine-bird’. 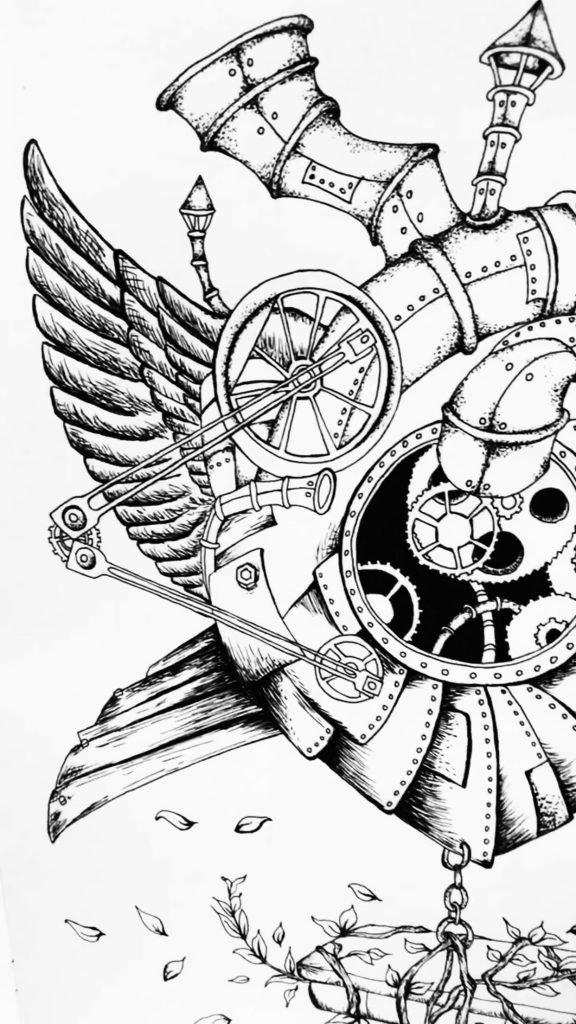 In the end, it resulted in this: 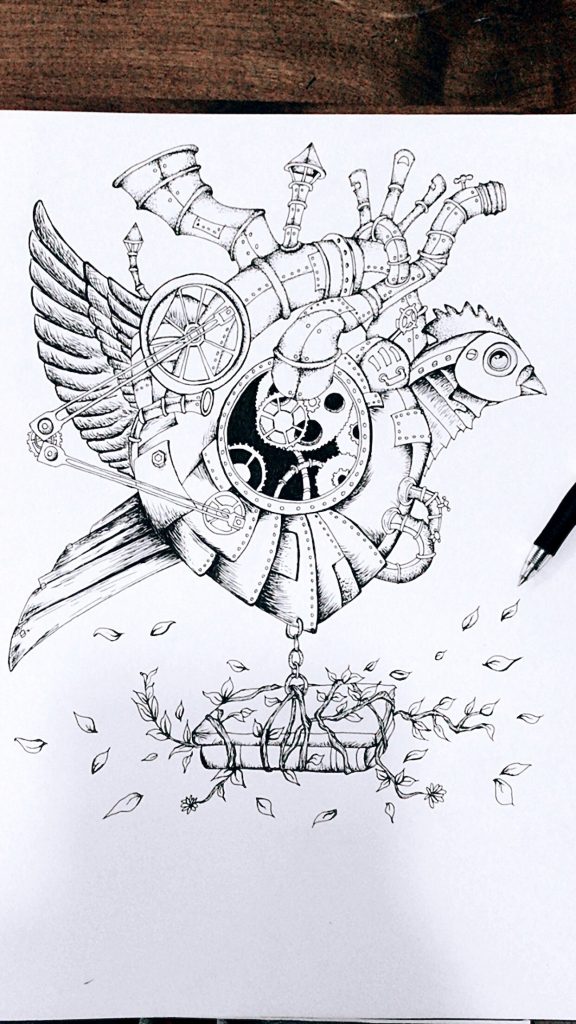 I created a big machine heart with a machine-like bird/chicken because I saw that Aster saw herself as the “fierce chicken” that she told me about because sometimes it’s aggressive and moves fast. But I also gave it wings because Aster saw herself as a bird too as a reflection of her inner personality. I gave it a big heart in the middle because of how she is sensitive and that is what makes her a wonderful human being. She is into the cool mechanic-fantasy and I wanted to portray that part of her in here. The reason for the tied up books the bird is carrying is to show that she is into books, into a world of her own when she reads something or watches something. The leaves were an added touch to show how in fantasies there is always nature in it and so I thought it would be nice to draw some in it. 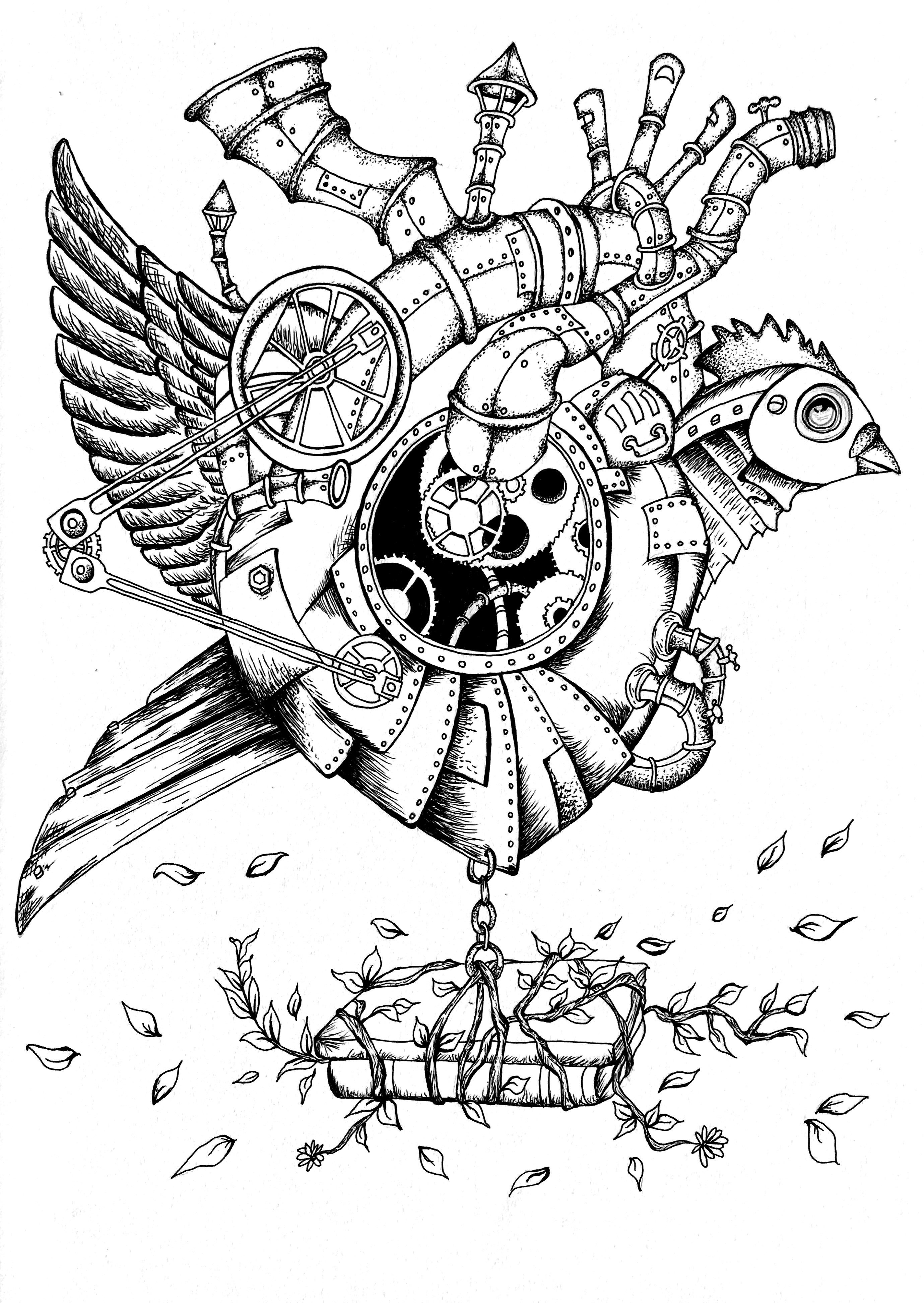 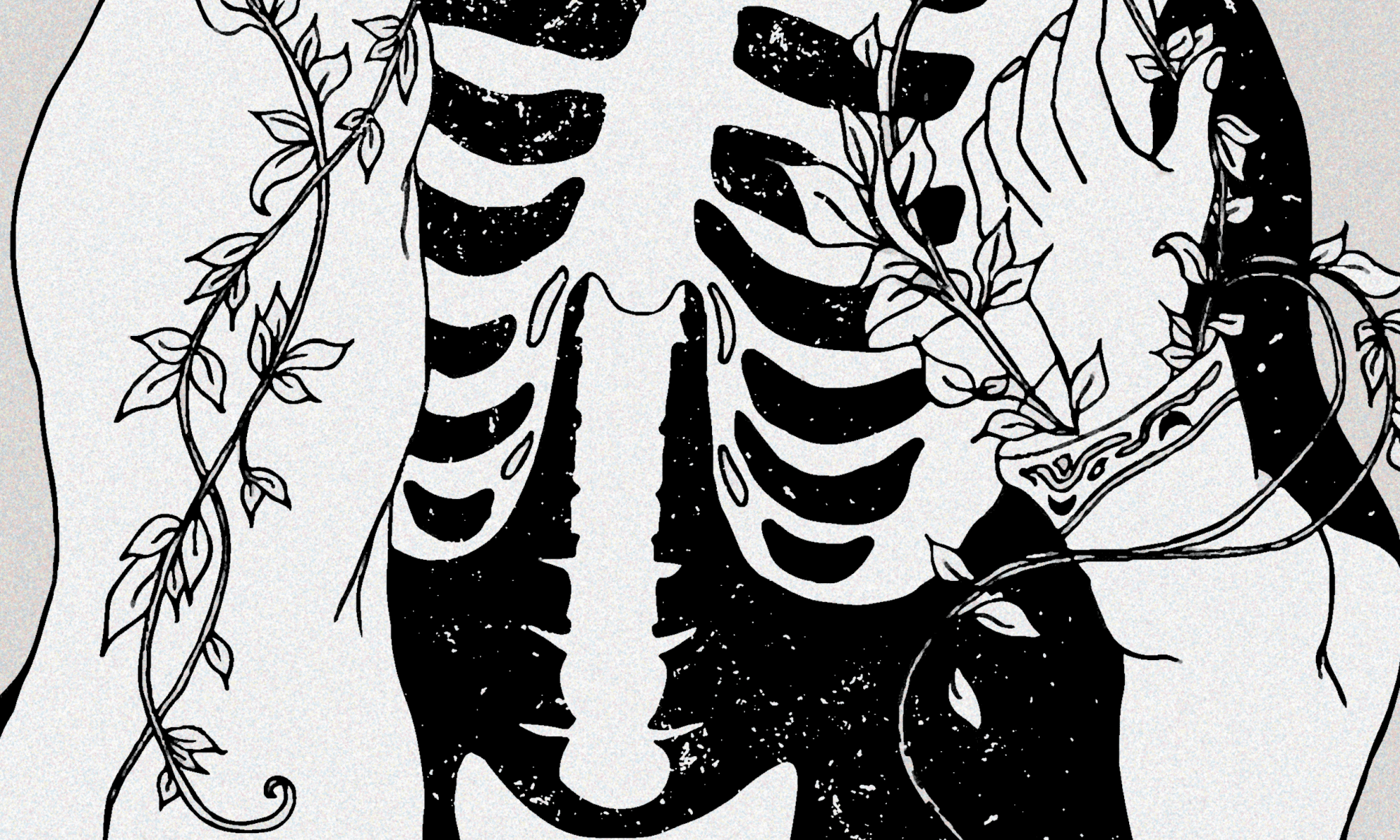 For this project, we are creating stylised portraits of ourselves and a partner we chose to pair up with in class, using inanimate objects to represent our personalities.  It is interesting as we dive into more experimentation into different stylisations, instead of making the portraits realistic.

I talked to myself and asked myself some questions about what I feel most passionate about as a human being. I like to go into the deeper aspects of things and some of it was this:

Simply because of it’s humble outward look. Soft and graceful when eating the grass or resting in a field. So sometimes maybe I see myself as that. But yet the horns of a deer could kill or fight any too – for self-defence. And I would like to think that is bravery, something I force myself to have when need be. And I would like to think that in the recent years of my life I have been brave and that I still am.

But I also see myself as a Black Panther at times. Due to its fierceness and it’s intimidation, that sometimes I would say I have when I am not in the mood to be kind. Something about that animal calls to me, spiritually, I guess.

With this information I collected, I then began to form ideas and put them into rough sketches so I wouldn’t forget. 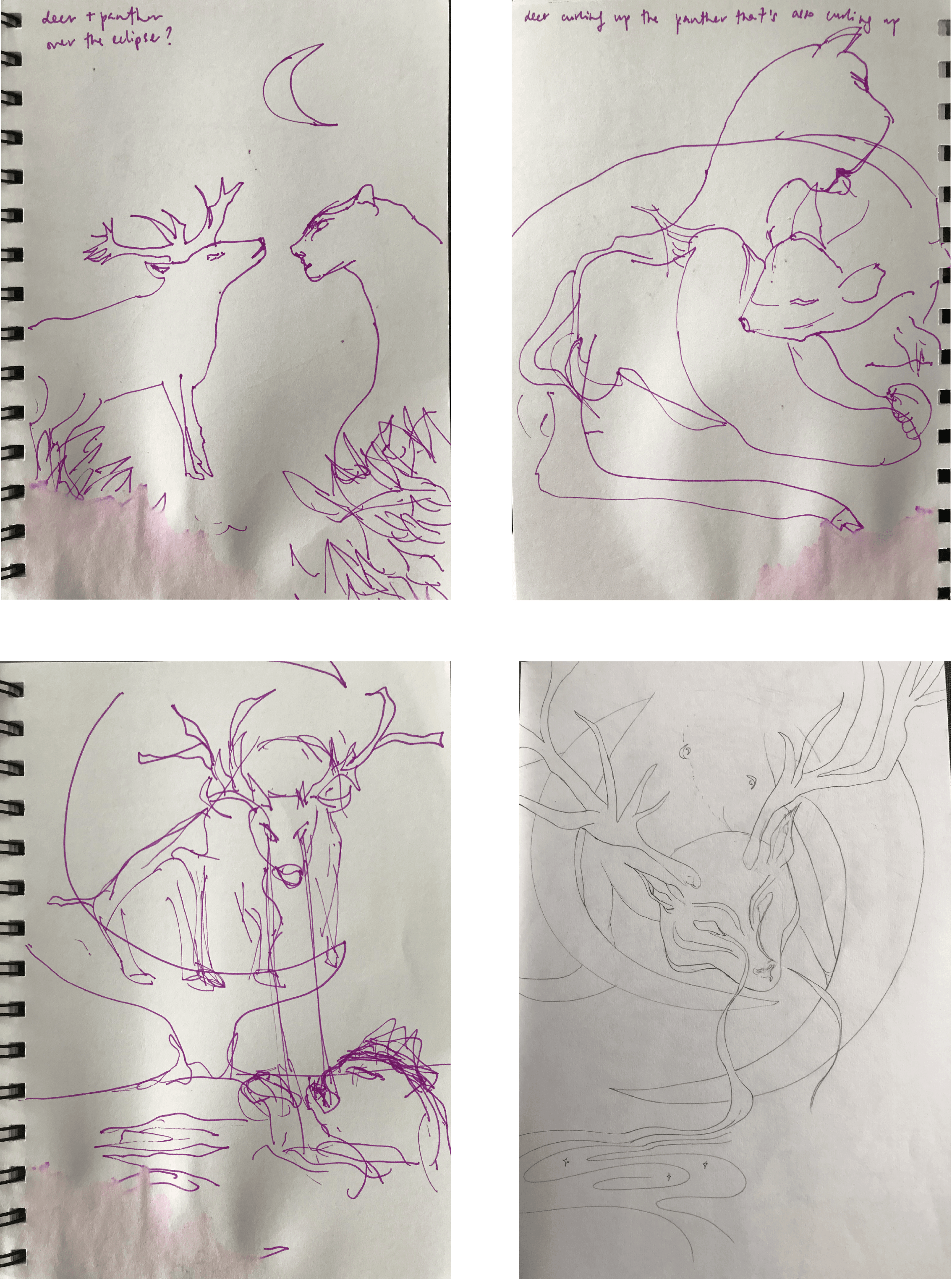 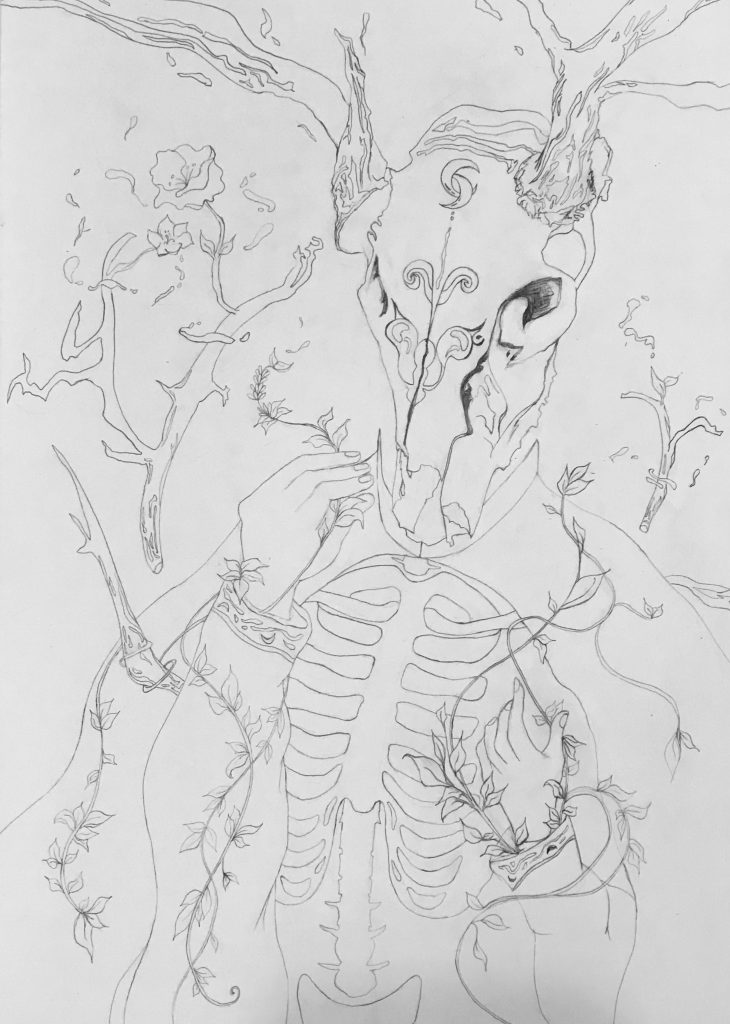 I fell in love with the idea above as I felt that I could see the ‘growth’ through plants and flowers here, and their movement spiralling with droplets of water thus showing my growth, and also my love for nature. Here I found a way to make use of my love for fantasy/dark fantasy, thus drawing the skull of a deer instead of a deer itself to show a darker theme. The bones of a human to show that I am in love with the growing pains of a human. I am in love with all that I am made of – hands, skin, bones. With being human. The entangled double moon symbol also further expresses my love for fantasy – for the meaning behind the moon – where it’s beautiful that even in the darkness it shines the brightest. A form of purity. Or even a cycle towards new beginnings (like the moon cycle).

So I decided to further explore it. I drew and erased and draw again till I liked my composition and then inked them before transferring to Illustrator. 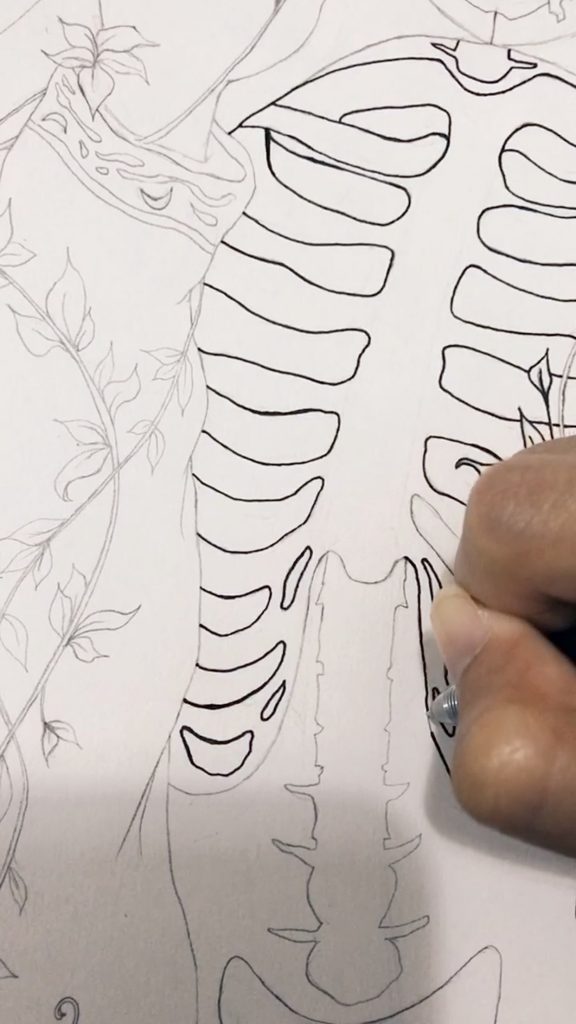 The reason why I decided to continue doing the traditional way before digitising it is that I feel comfortable doing so. It is my way of saying “this style is me”. I play a lot with lines because even though it is simple, you can turn it into curves and shades and it becomes a ‘look’ for your drawing/illustration. Using a pen to do it could even add on a texture. Hence why you see a lot of line works here – through the creeper strands, the deer’s horns.

I was very inspired by the things I search up on Pinterest. They were mainly illustrations of dark magic or revolving around dark fantasy. Below are some examples.

But I was also inspired by most of Victo Ngai’s works because of his line works, and the theme of fantasy/surrealism he has in his works (and also use of colour but that’s not what we’re headed for here).

After getting all that inspiration, I went to further develop my work on Illustrator. 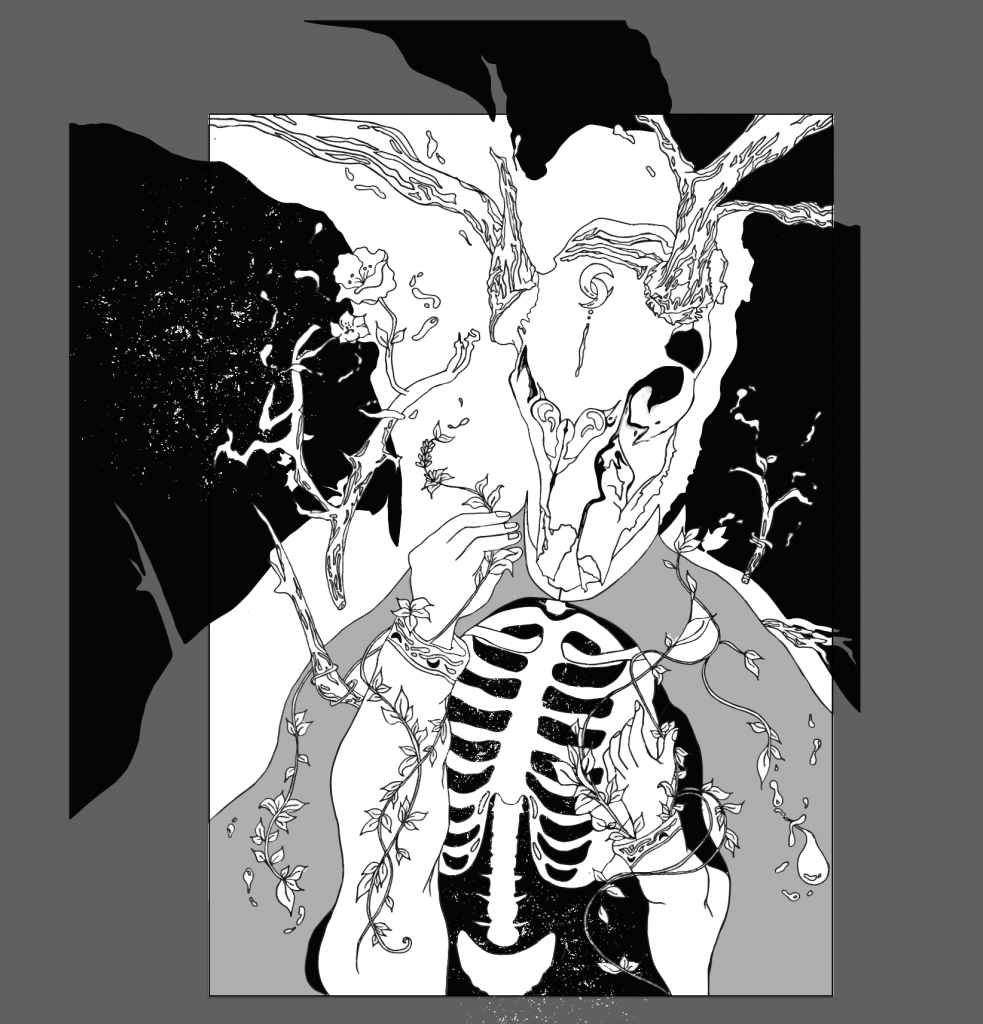 During the process, I was still trying out different ways to get the texture out of my work. So I tried doing it traditionally again by adding pen work into the background of my bones. I purposely leave tiny spaces to create a certain grainy texture. 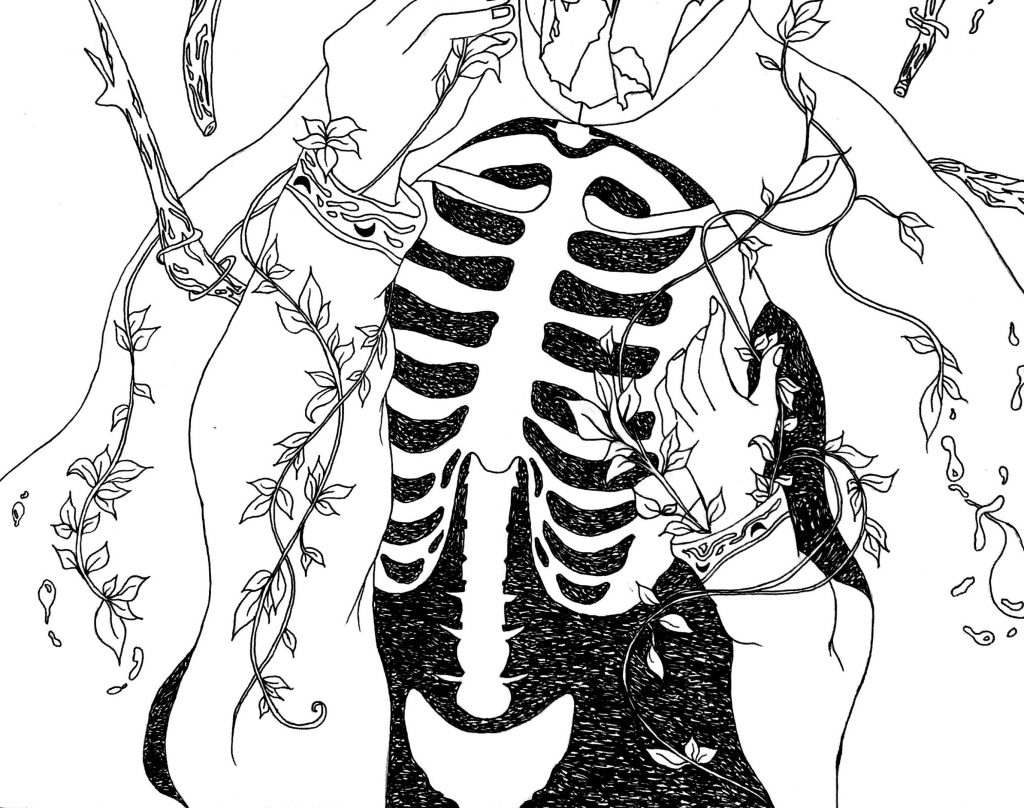 Before that, I was playing around taking photos of my process. But I downloaded this when I saw that the grainy effect off from a film filter on Instagram gave me this look out of my work – I DIG IT. 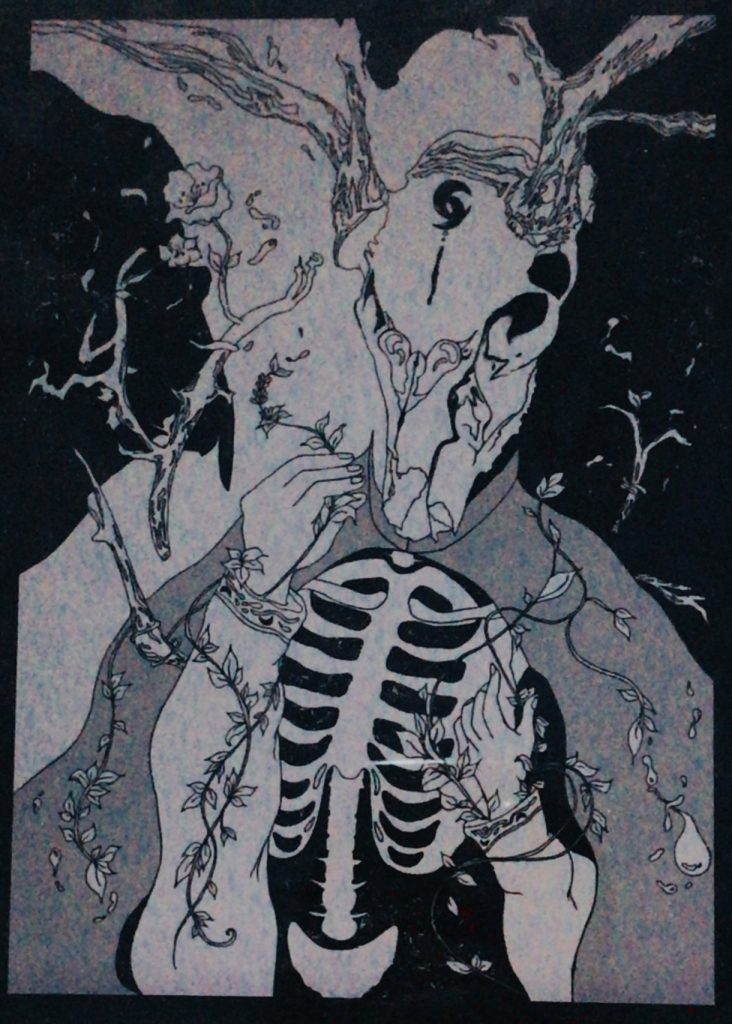 So I decided to put a grain effect on my work: 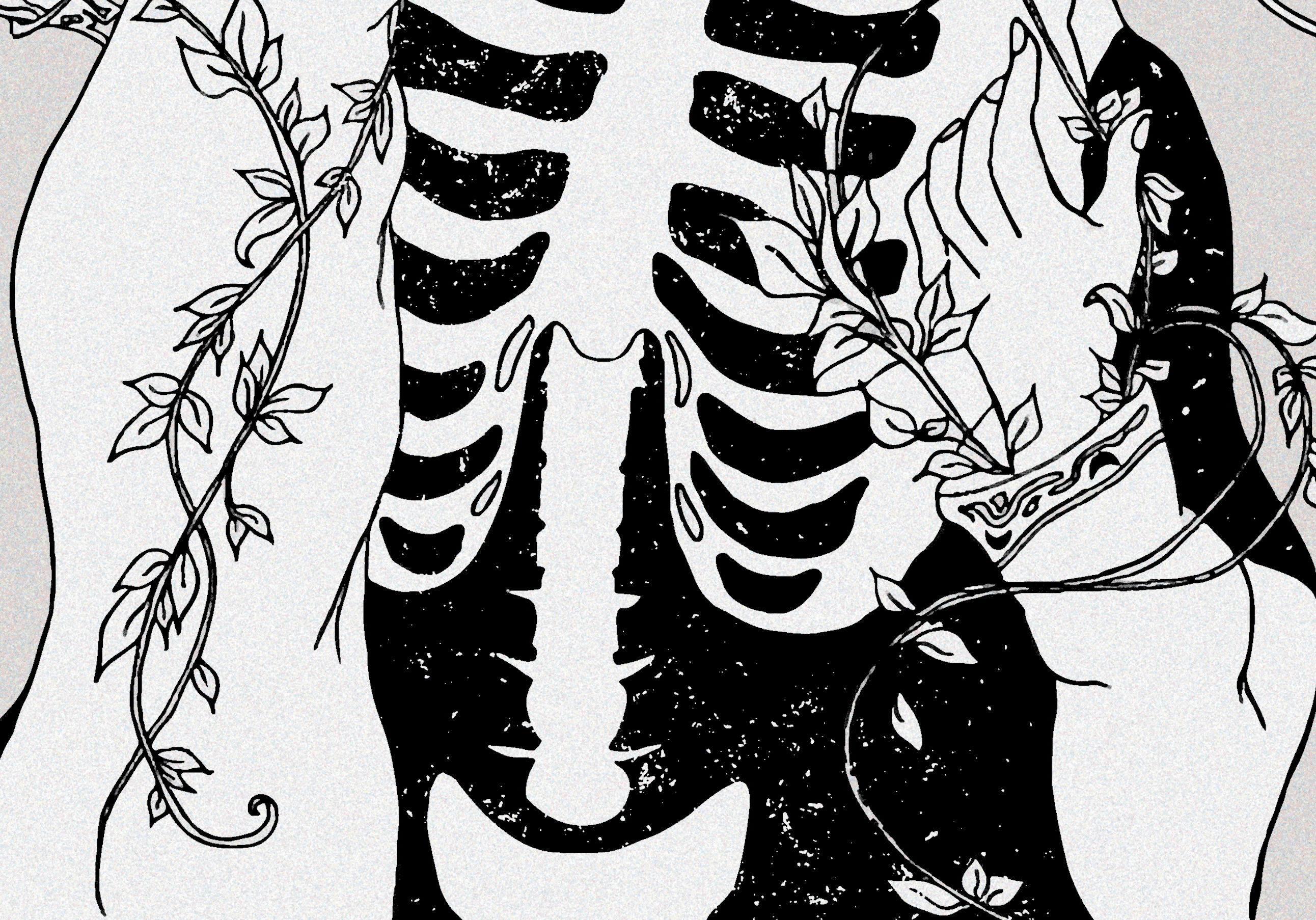 I liked both I showed below. The half black half white on the right gave it a more abstract feel. But if I have to really pick one, it would have to be the one with a fully black background as it looked more whole. 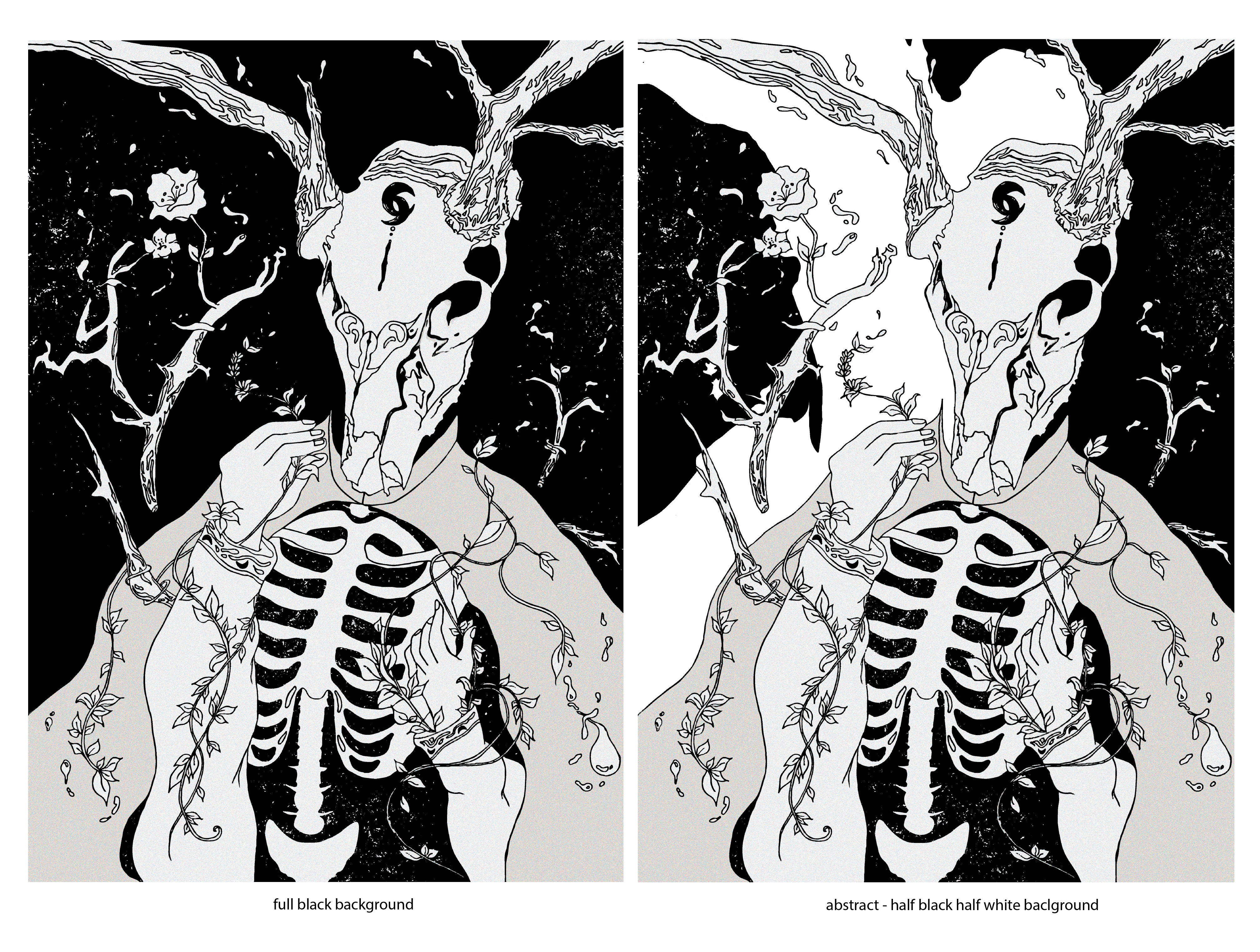 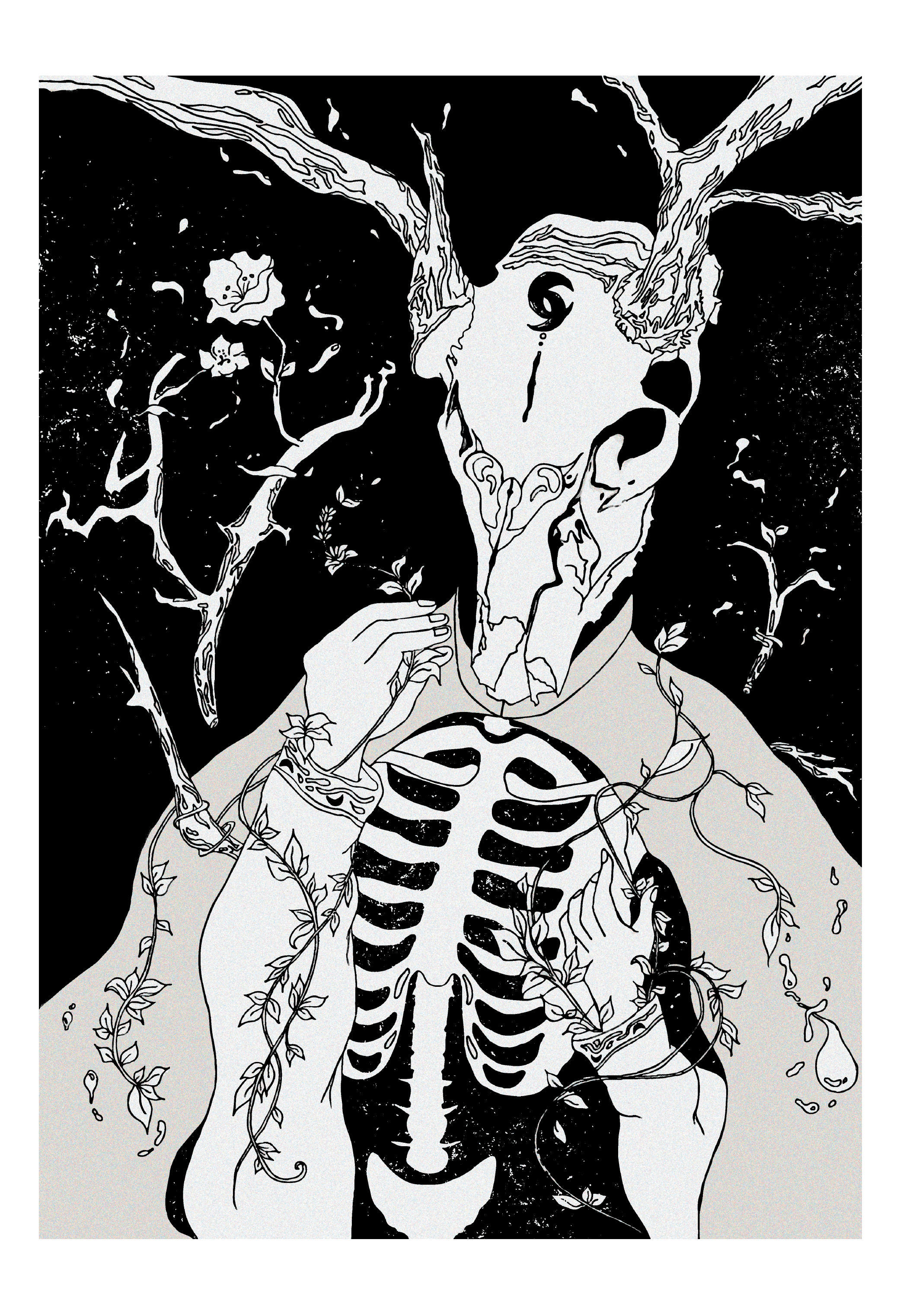