I wanted to create an image sequence of a single scene. The focus is on playing with framing to reveal a different aspect of the story in each image. The story unfolds in space instead of time. 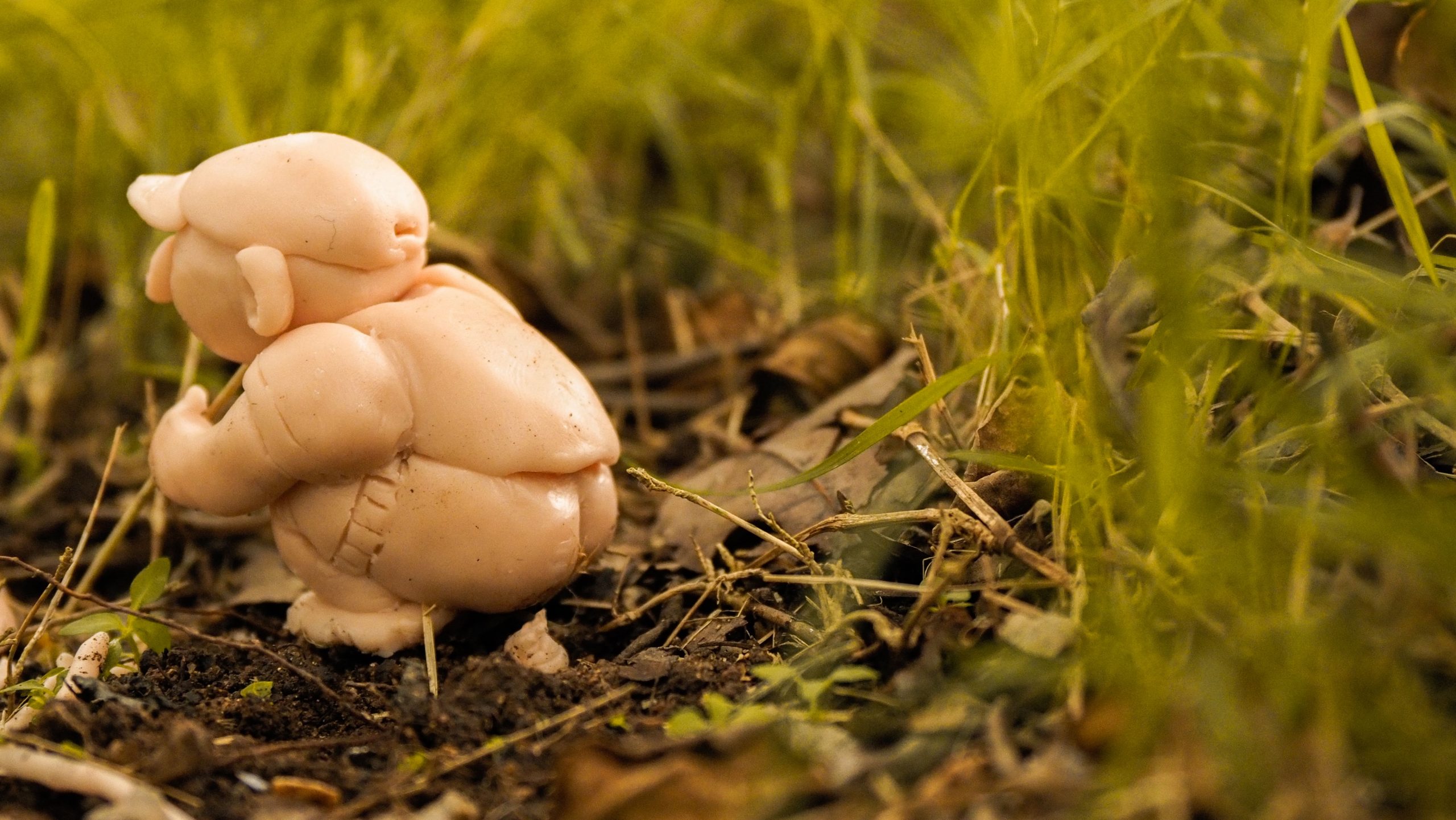 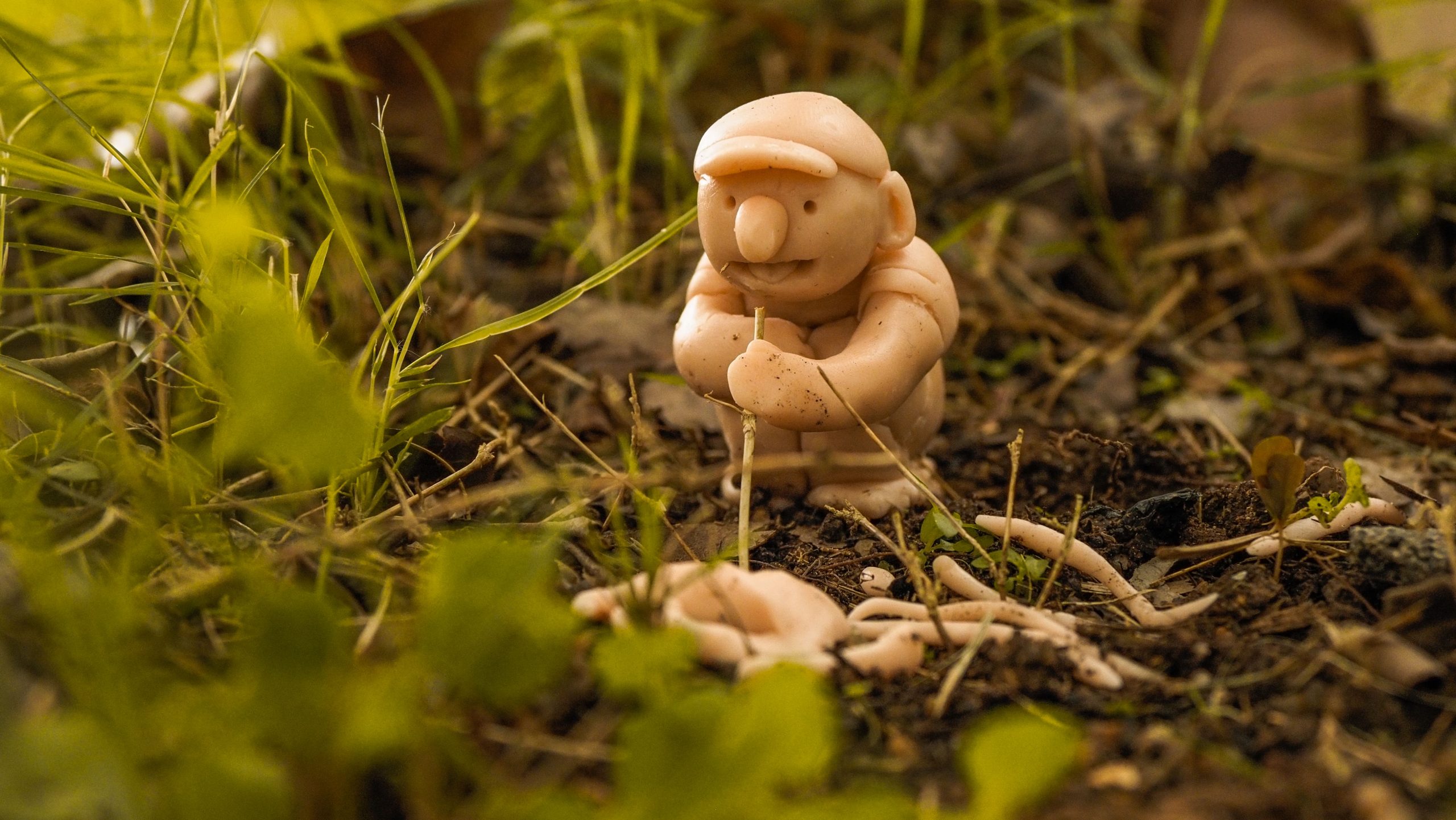 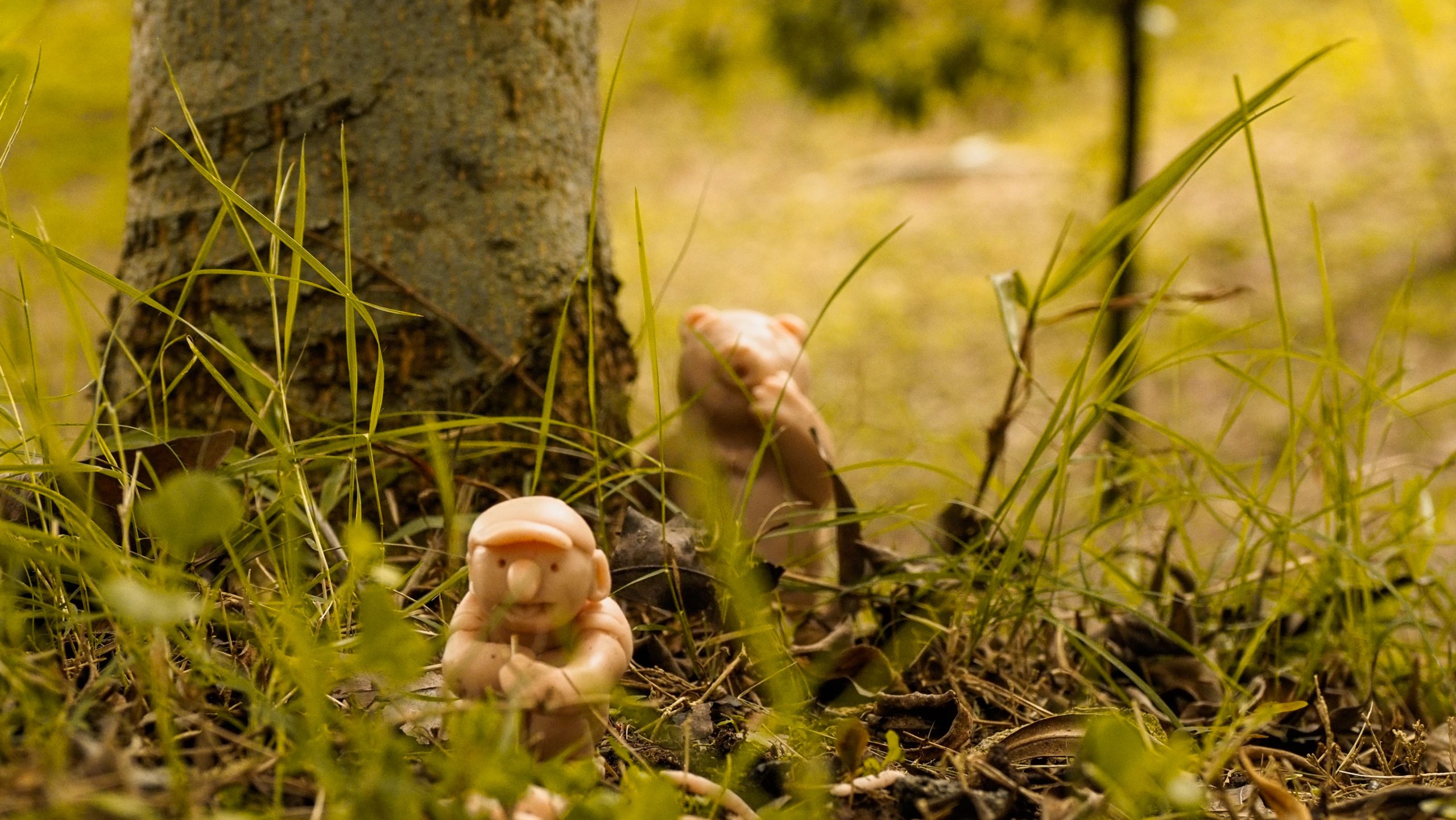 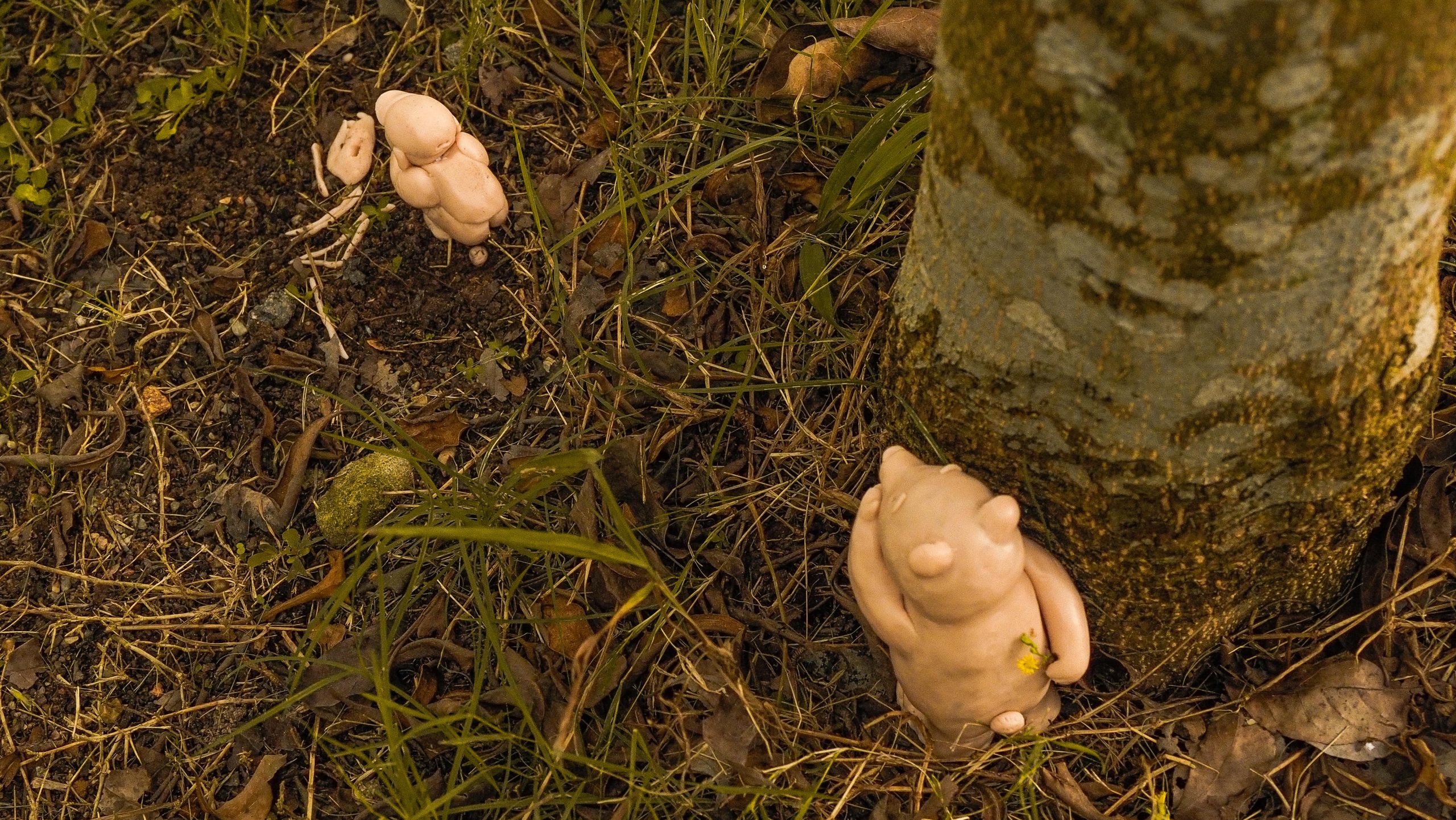 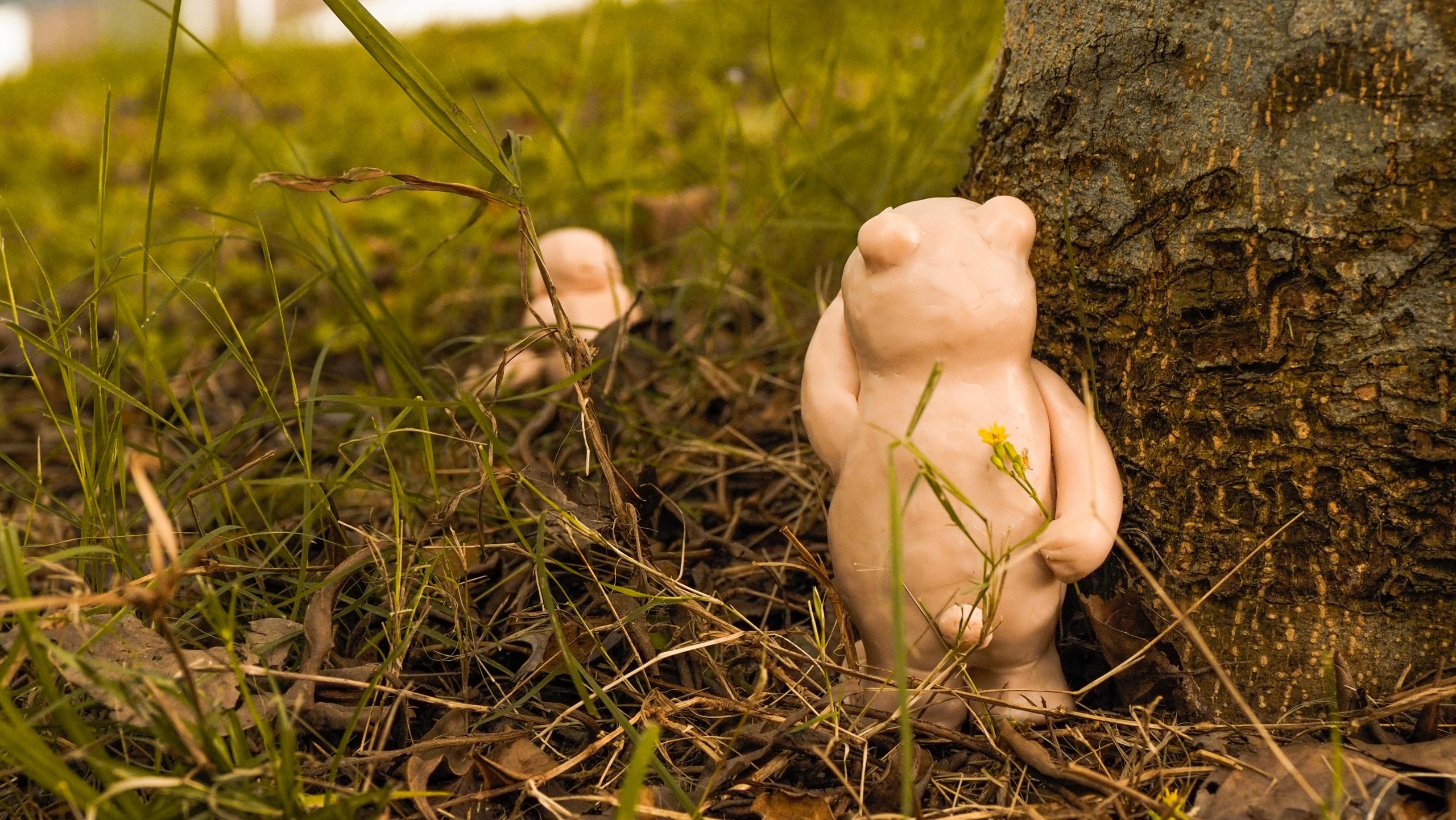 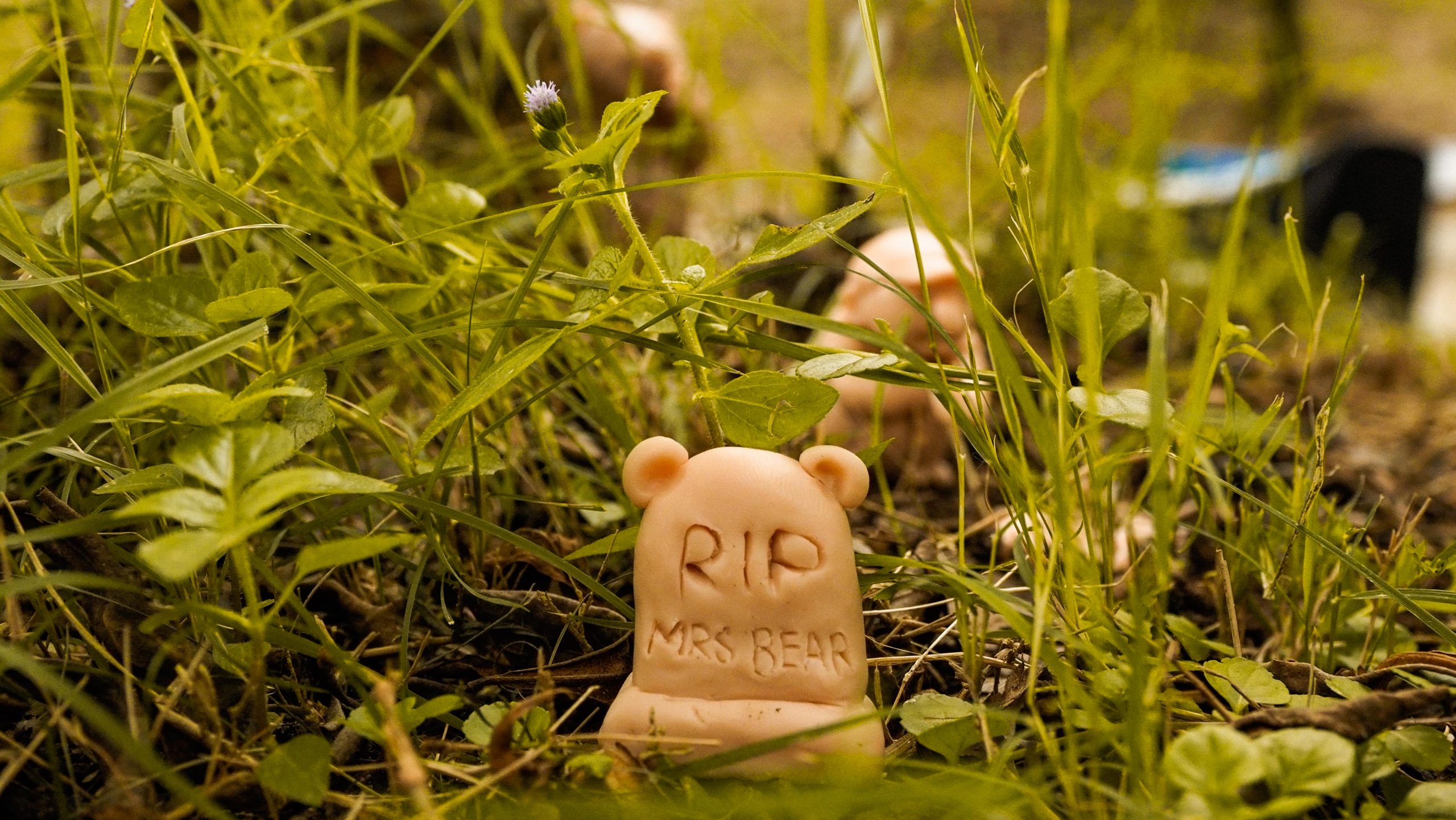 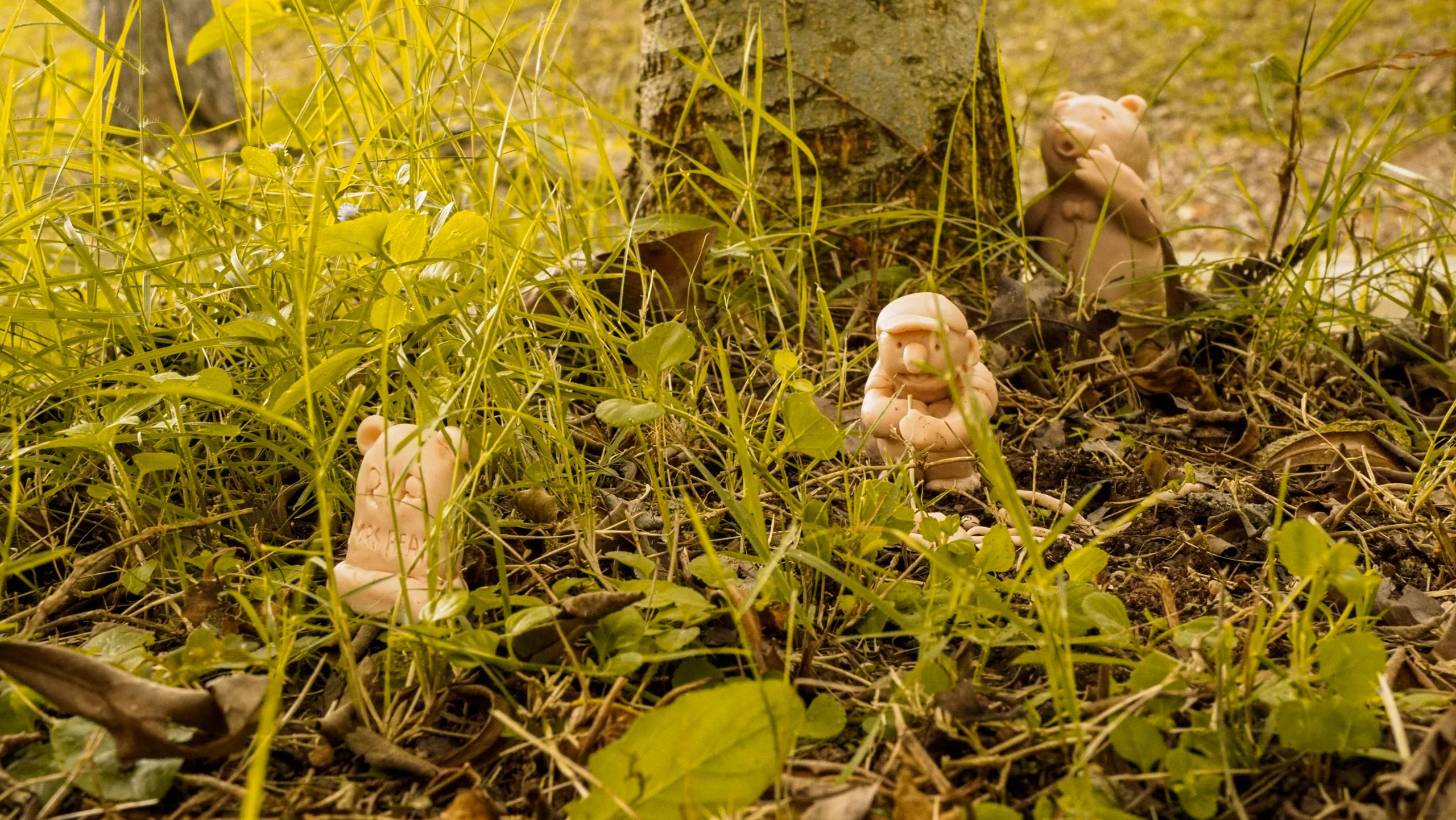 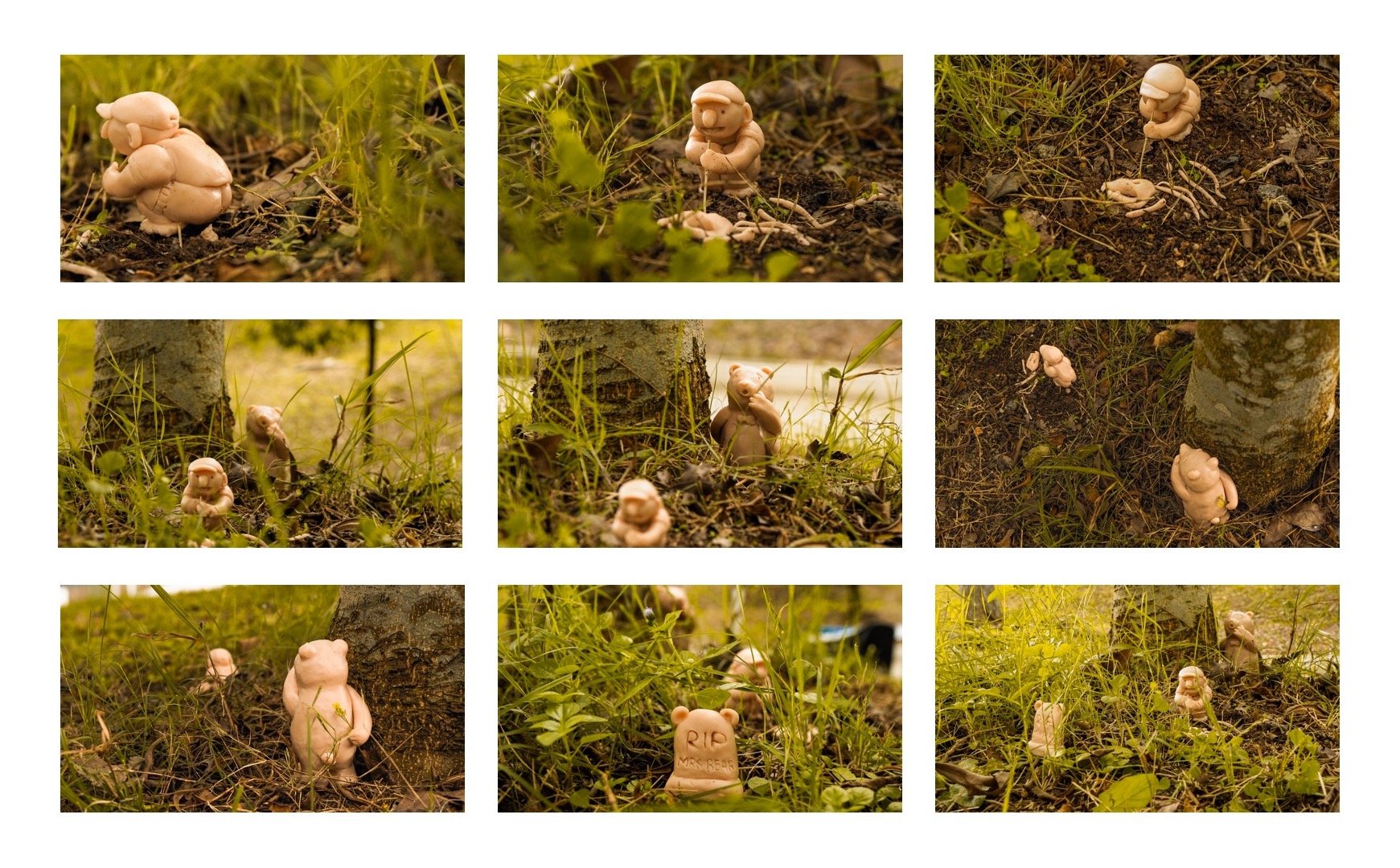 The story is as goes:

Brainstorming for a suitable story was particularly hard! The story has to unfold a little more each time the scene is revealed further.

I used Super Sculpey clay to make the figurines because they are easier to sculpt and I also happened to have them. I stuffed the insides with crushed paper and propped up the clay with the metal nose wires from used surgical masks.

One problem is that I didn’t bake the clay. As a result the clay was very much mouldable and vulnerable to getting mushed. Several details got smoothened out after a while of handling the figurines. 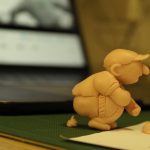 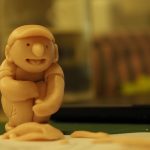 I pre-arranged them roughly in my room to get a sense of how I would position them outdoors. 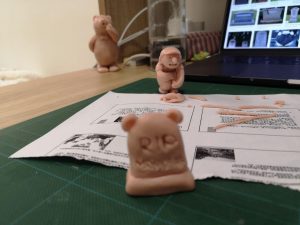 I found a plot of grass near my hall. Surprisingly, it wasn’t so straightforward to find a suitable place to shoot. This is because I needed access from many angles which wouldn’t be possible if the ground is too elevated/ slanted. There needs to be sufficient foliage cover and flat enough ground that the figurines can balance on. There also shouldn’t be too many ants ://

I set up the figures and shot rather quickly for 15-20min.  I thought that the natural lighting was rather nice that day. And then there was a torrential downpour… Luckily, I had taken enough photos.

For instance, I preferred this shot: 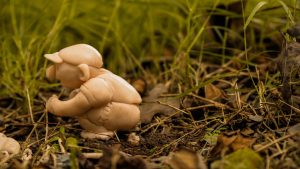 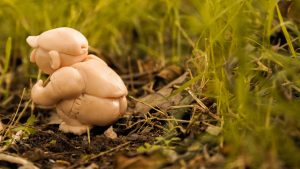 but I went with the latter because I feel that it has a stronger ‘revelatory’ effect in adjacent to the next image, in the sense that the image/pose is not as similar. Overall this was a fun project! I’m quite content with how it turned out. I hope that the images can speak for itself without me explaining the story.

I wanted to explore more ways to play with time-lapse. I took a time-lapse of the building opposite my hall room as the sun was setting and I was intrigued by the lights flickering on and off.

The rhythmic nature of the flickering was strangely melodious. This is especially so when staircases at different storeys successively lit up — just like musical scales. This inspired me to create something like a “light orchestra”.

I took several more time-lapses from a different vantage point — but this time round with the scenes unfocused. I wanted to draw attention solely to the lights without distractions from the architecture or moving humans. I set the time-interval to 2-3 seconds per photo and took around 250 photos for each scene.

I then pulled the time-lapses together in a timeline and attempted to sync the flickering of lights to a sound track:

It was quite difficult to sync the lights effectively to the music. If the melody is too sparse, the flickers are often too complicated to match up — rarely does only one light flicker in one scene. Conversely, if the melody is complex, it becomes impossible to correspond the flickers accordingly.

I took a few tries with different soundtracks before arriving at one that has a mix of simple, distinct notes, and a string of flowing, convoluted notes. I feel that this gives more leeway for the time-lapse to harmonise with the music.

I roughly categorised the time-lapse sequences into simple flickering and messy complicated ones. I started with an establishing shot of the night scene to set the context. Subsequently, I let the music dictate the accompanying time-lapse scene. Sequences are sped up and slowed down when needed. I tried to avoid cutting or altering any sequence, but this was done anyway in certain segments.

Here is another attempt with a different soundtrack:

I wanted to capture the atmosphere of my neighbourhood on a quiet and sultry Sunday afternoon. Many things seem to come to a standstill in the heat, except the clothes draped over bamboo poles at every storey. These clothes almost like a staple sight of every neighbourhood in Singapore; hung out in the sun, fluttering to the tiniest gust of wind.

I added ambience noise along with some chimes in the background to convey an idle, quiet mood.

I also took another time-lapse of a construction site that can be seen from my house’s window. I took over a 35min period, at 3 seconds interval.

This is the view from my house:

The construction site is far away enough that I usually barely see any movement from my end. It was just a curious thought of “what if I just take a time lapse”? I wasn’t expecting much from it at all.

Surprisingly, there were in fact quite many workers moving around the site. There were also subtle movements that I would never have observed in real time — such as the lift transporting the workers to basement levels (?) in the bottom right. I thought the small quick movements contrast nicely with the general stillness of the whole scene.

The bustling around felt really cute and gave the impression of worker ants moving around an ant colony — simply because of how cubed-up the construction site is and how small the people in comparison to it. 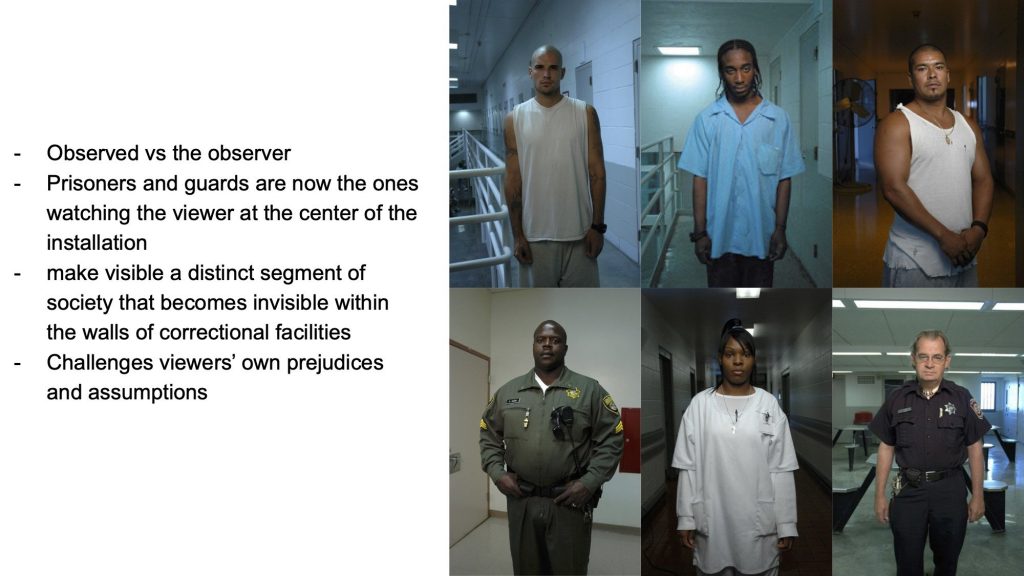 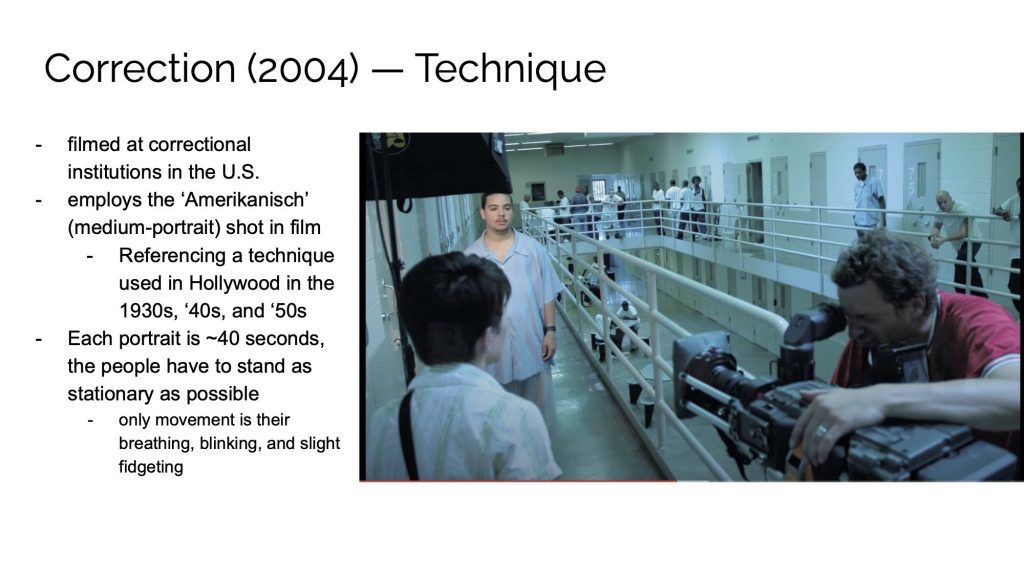 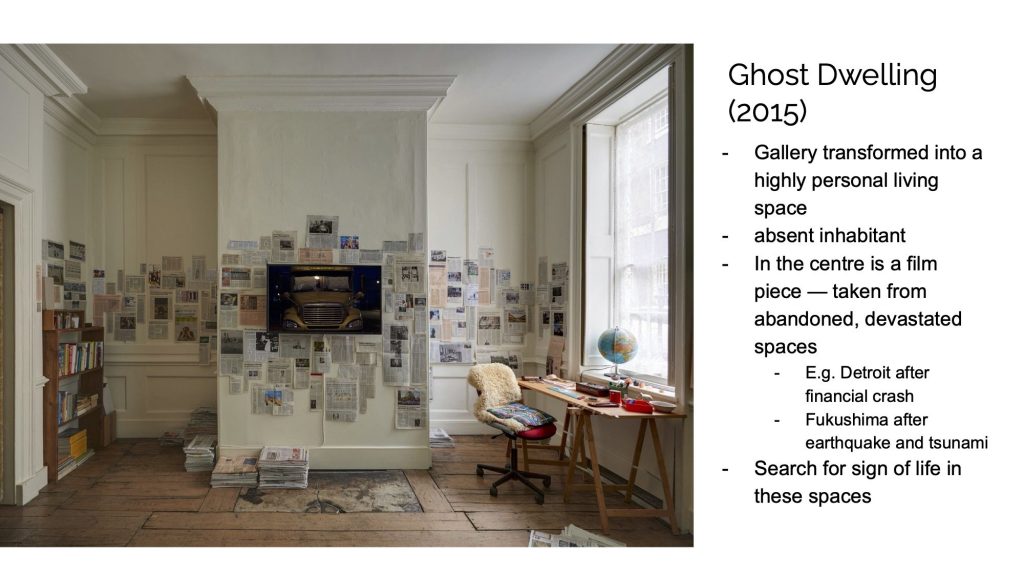 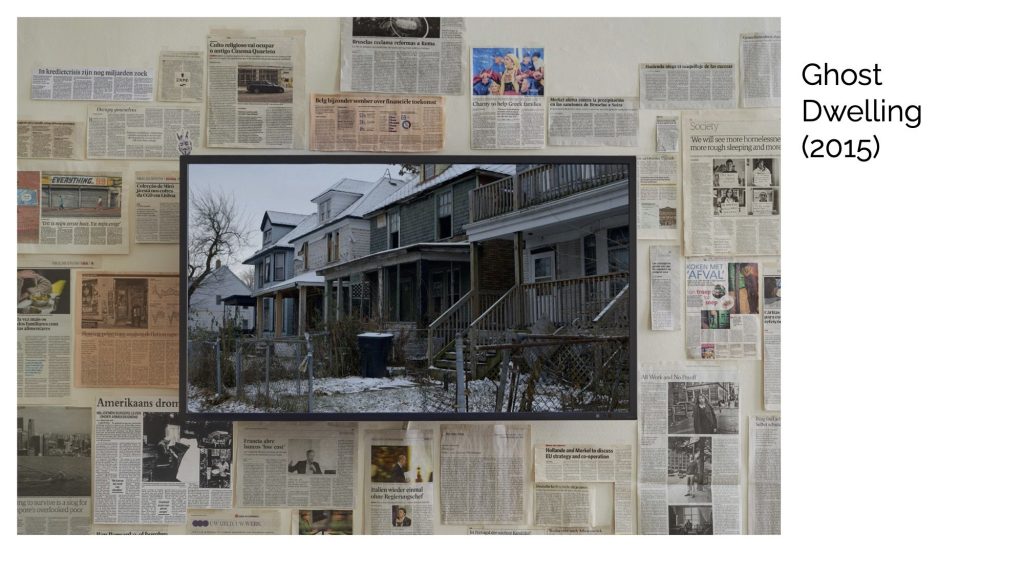 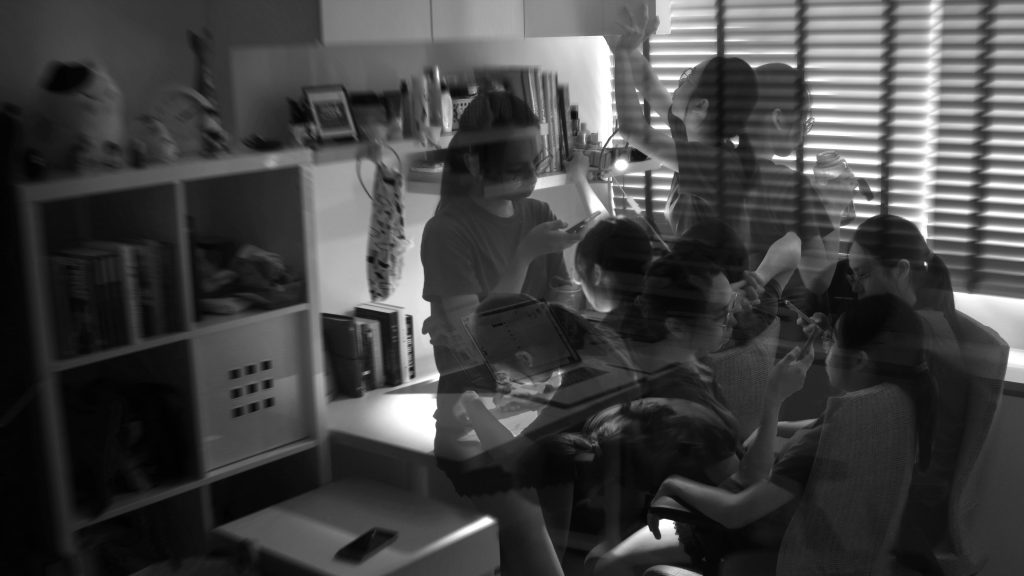 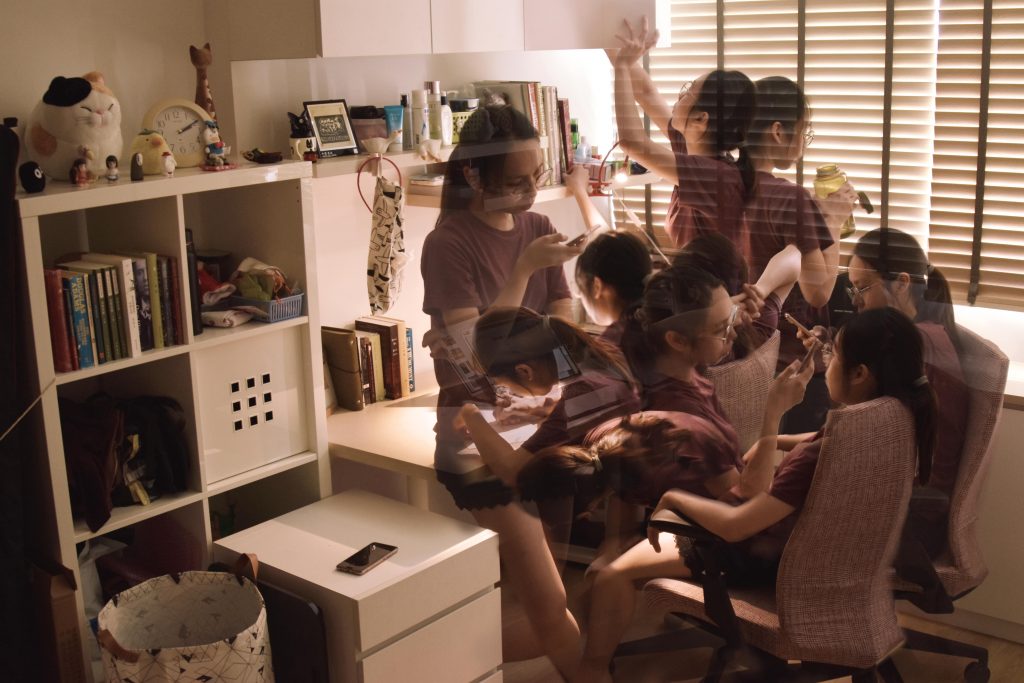