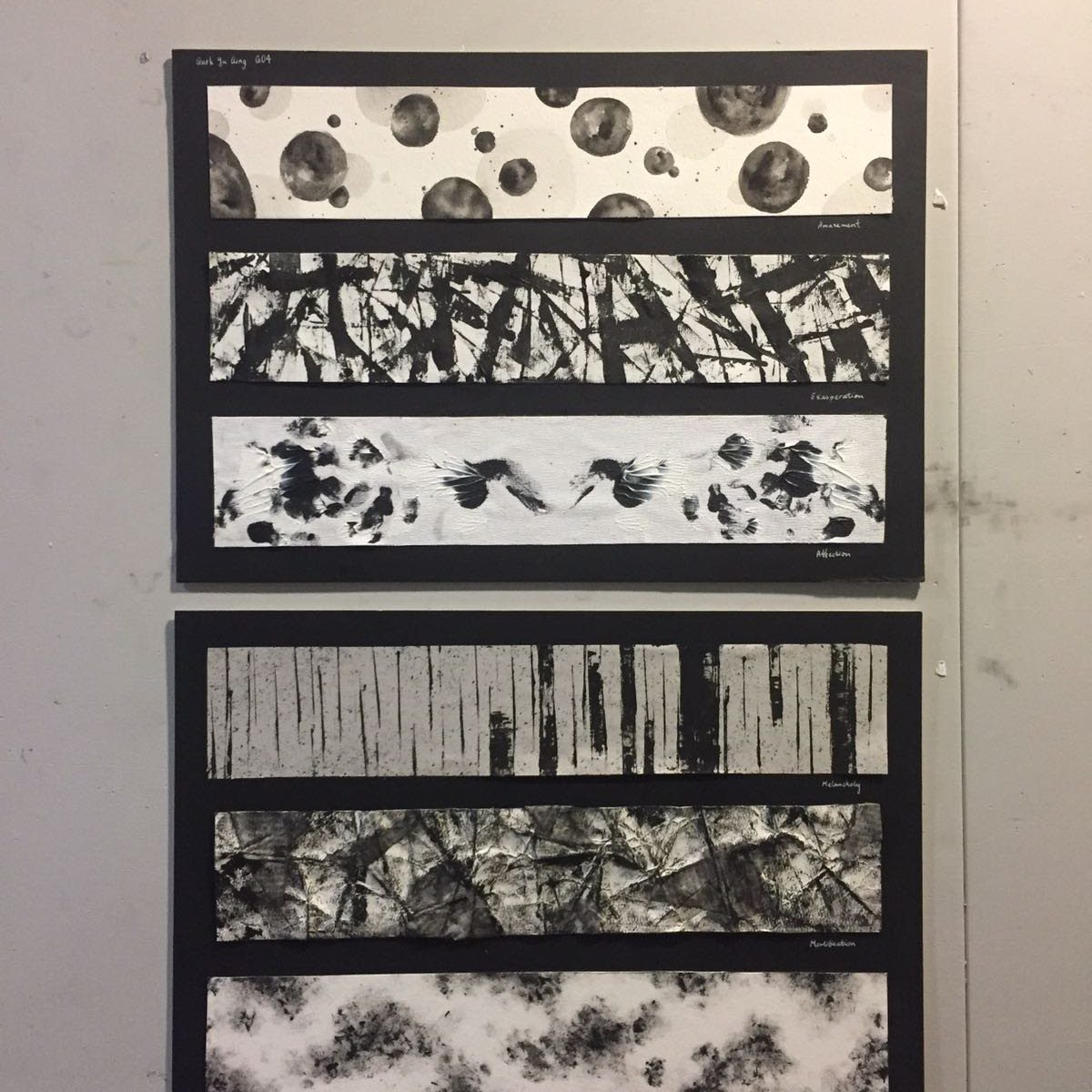 And it comes! The day of final submission! Three weeks of mark-making and it’s now over! 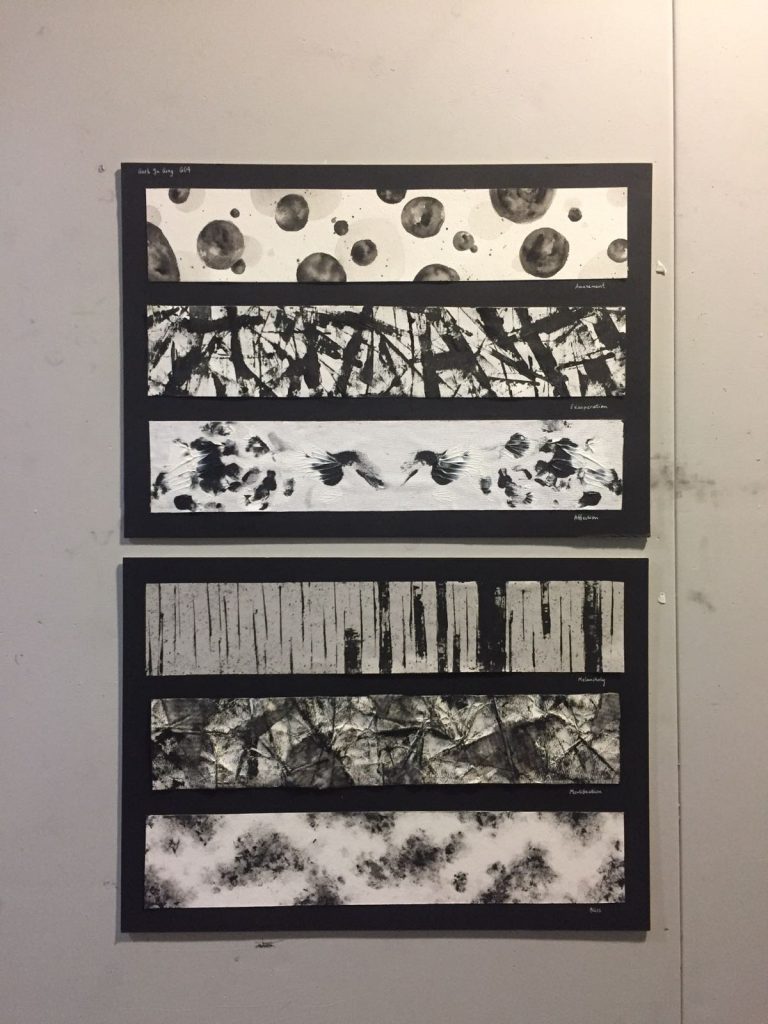 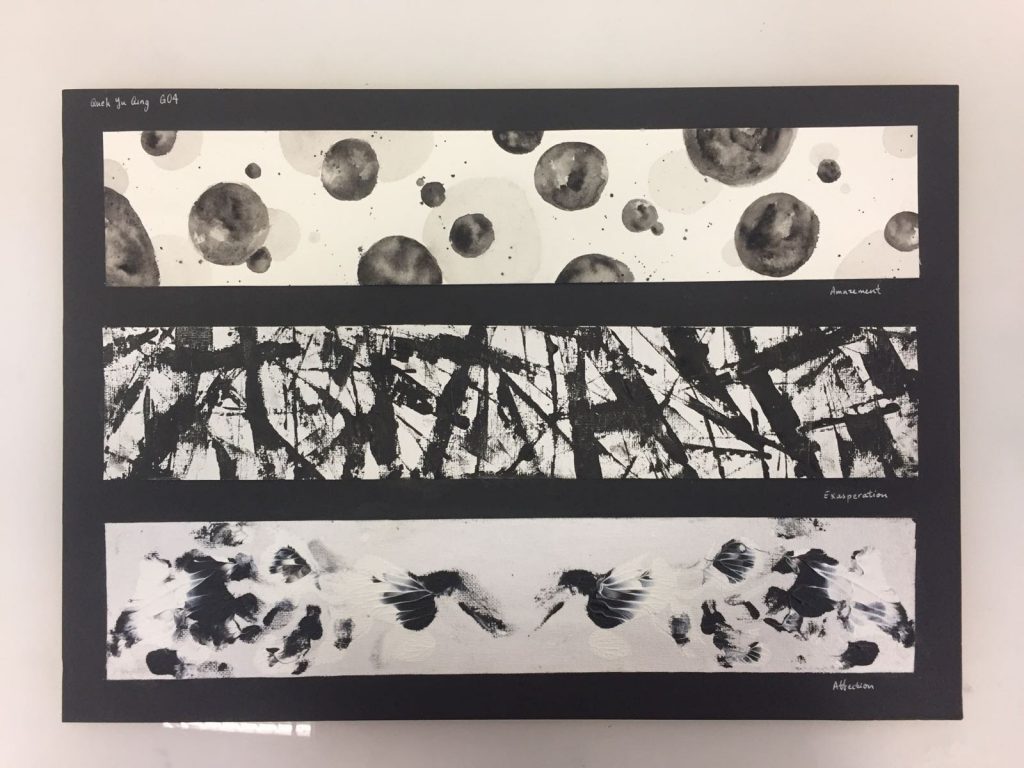 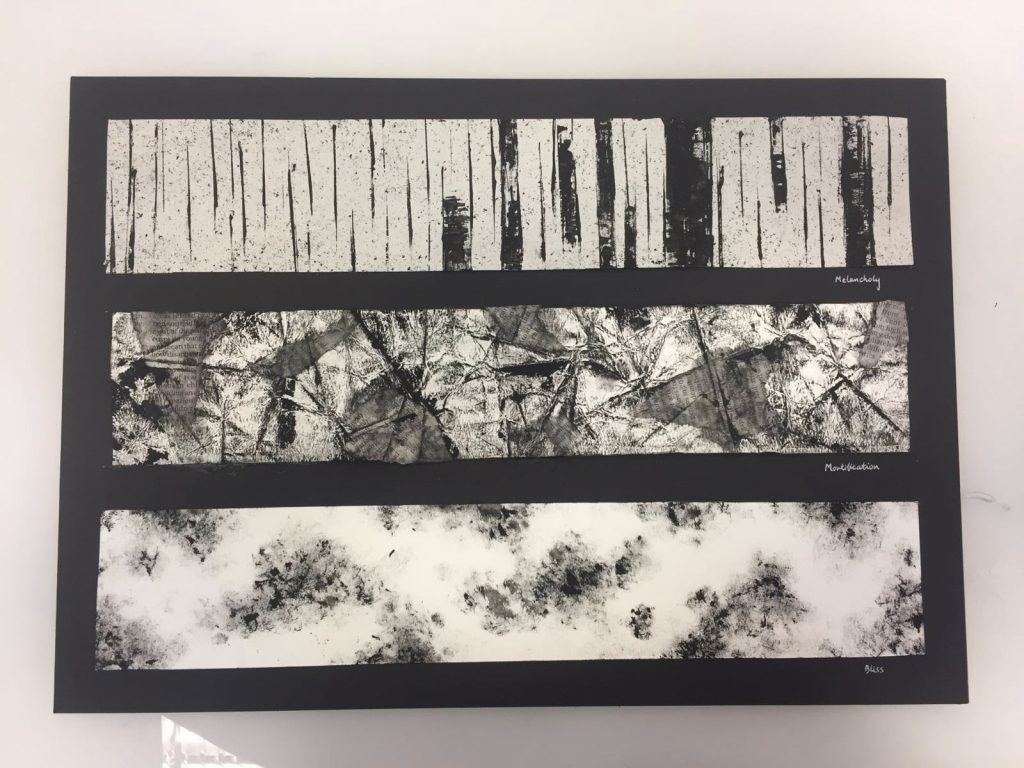 Before the final end — bliss

I really love the museum-style presentation — we lay out our works just like how they’ll look in a gallery and we are walked through the works one by one. It was really intriguing to learn about what my peers did and how they interpreted different emotions differently from me. 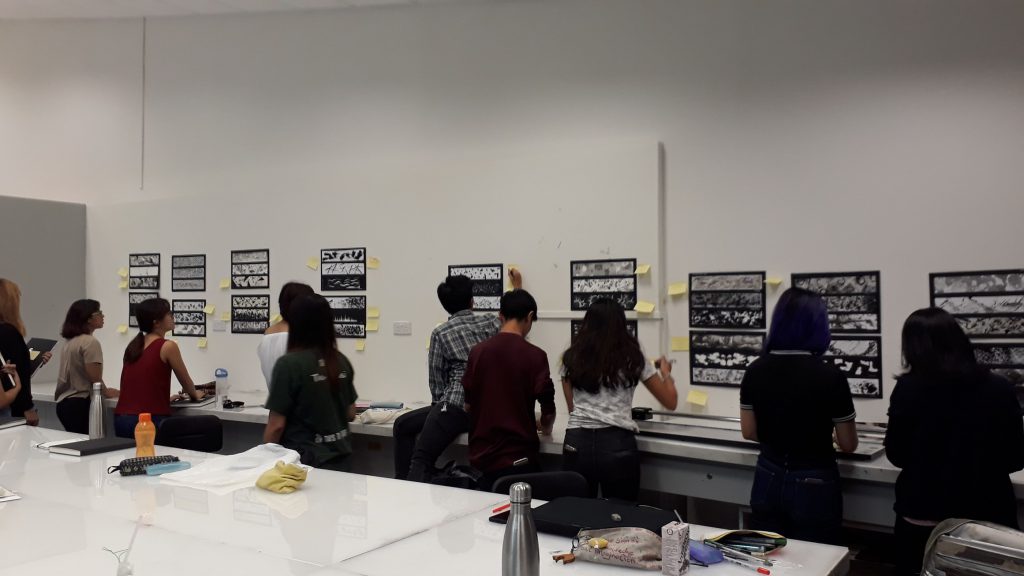 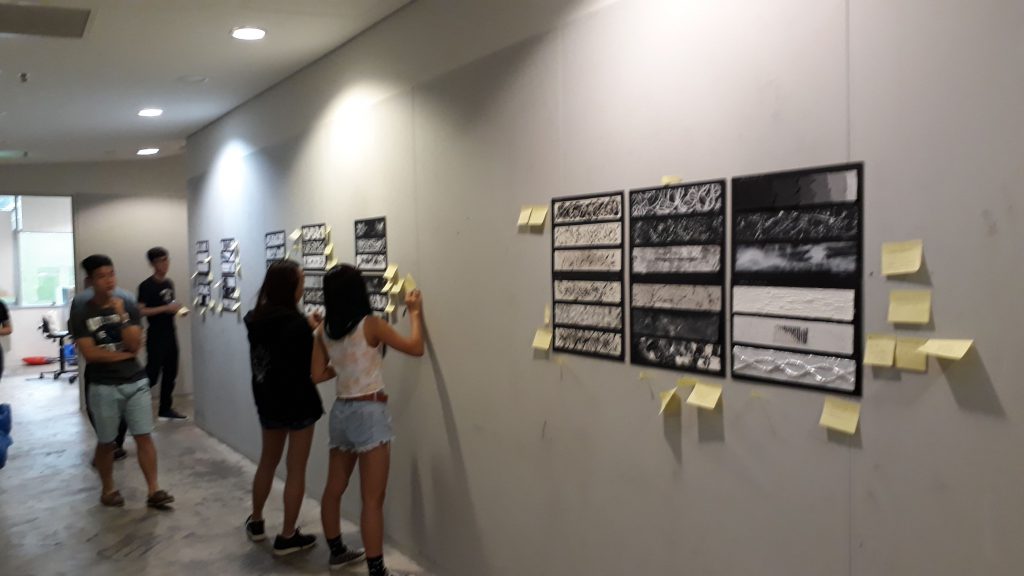 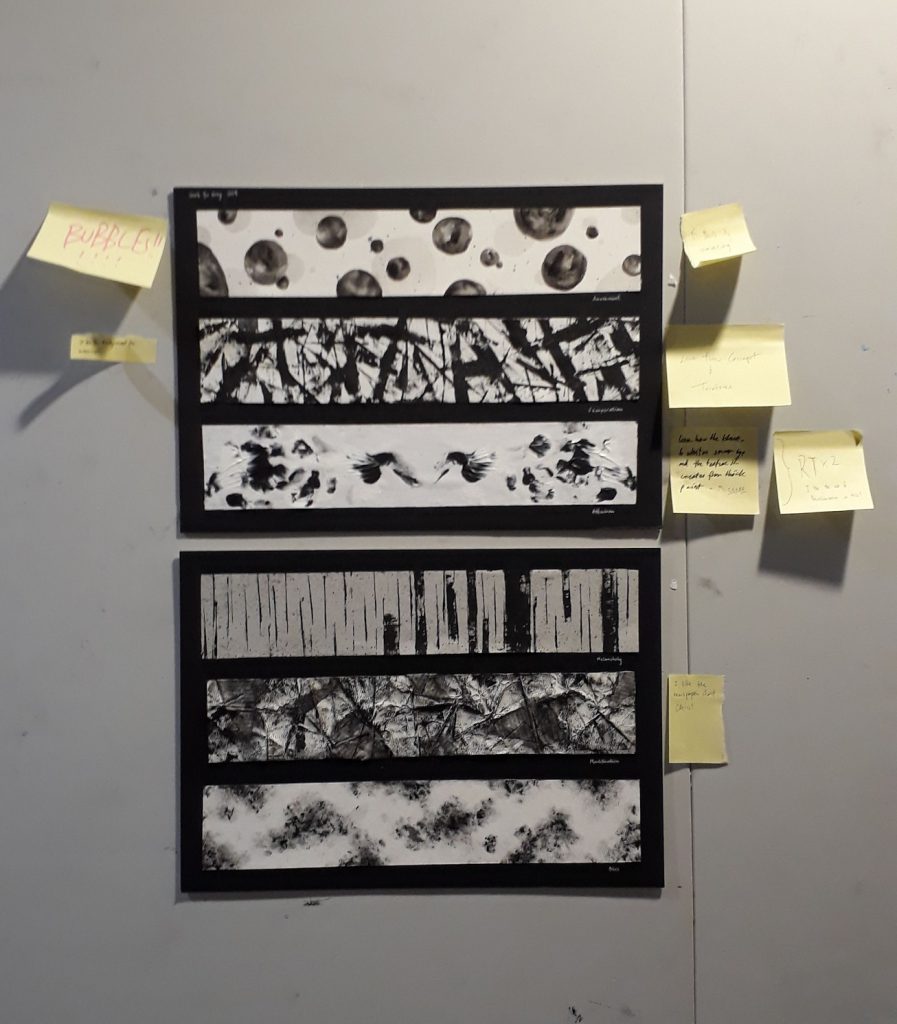 Thanks friends for the encouraging comments :D

Overall I’m rather proud of my work but I feel that I could have explored even more with different mediums and materials. I initially thought that this project would be easy, but that was not true at all — it was only through tireless experimentation that I am able to generate my final pieces. But it was only through this process that I came to realise the importance of experimentation as an indispensable part of the creative process because there were so many inspirations that only revealed themselves to me along the way. All in all, mark-making is a highly therapeutic activity. I really had a lot of fun working on this project :) 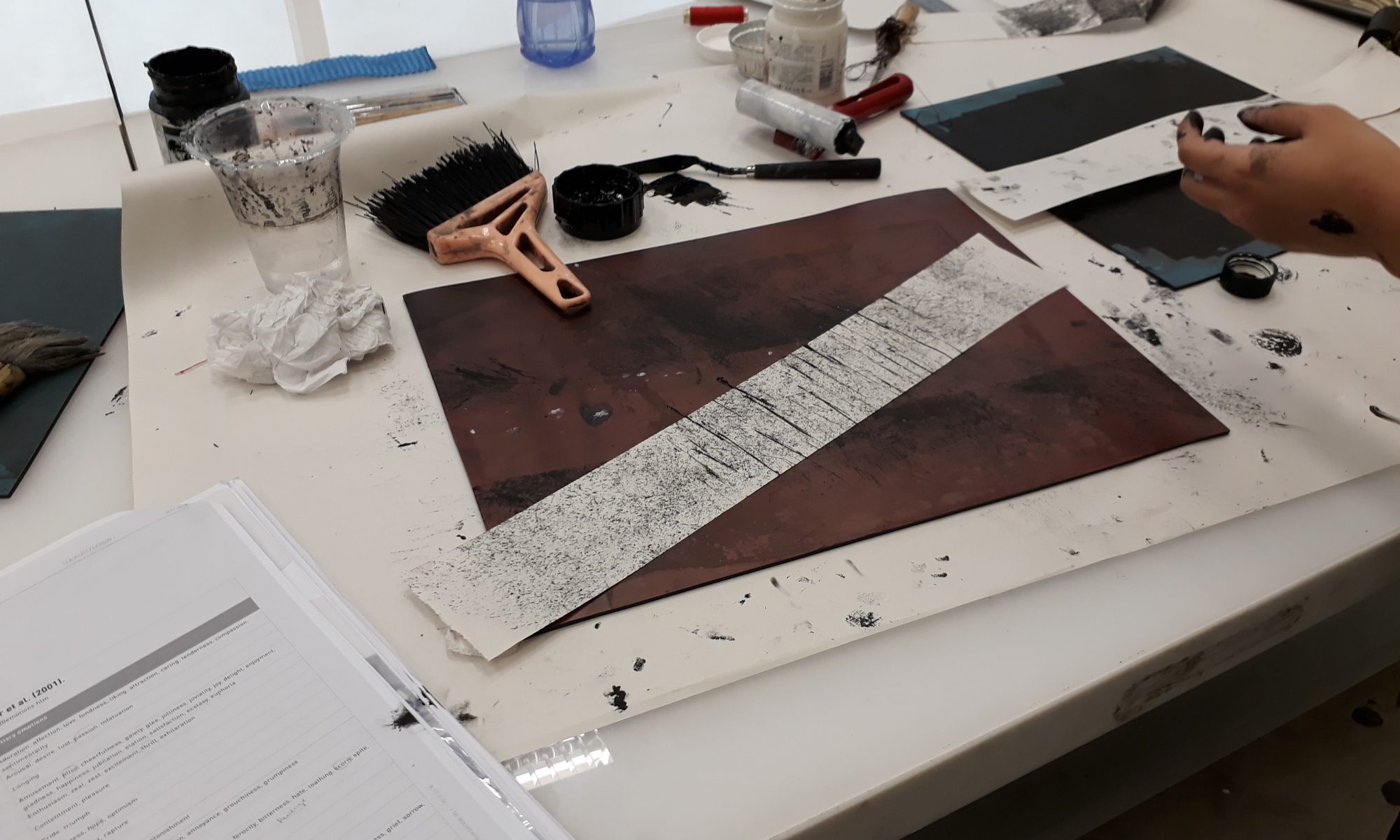 Here are some documentation of the process I’ve been through for mark-making. I realise I’m not a person who can multitask very well, and so I kept on forgetting to whip out my phone to record down my experimentation process. 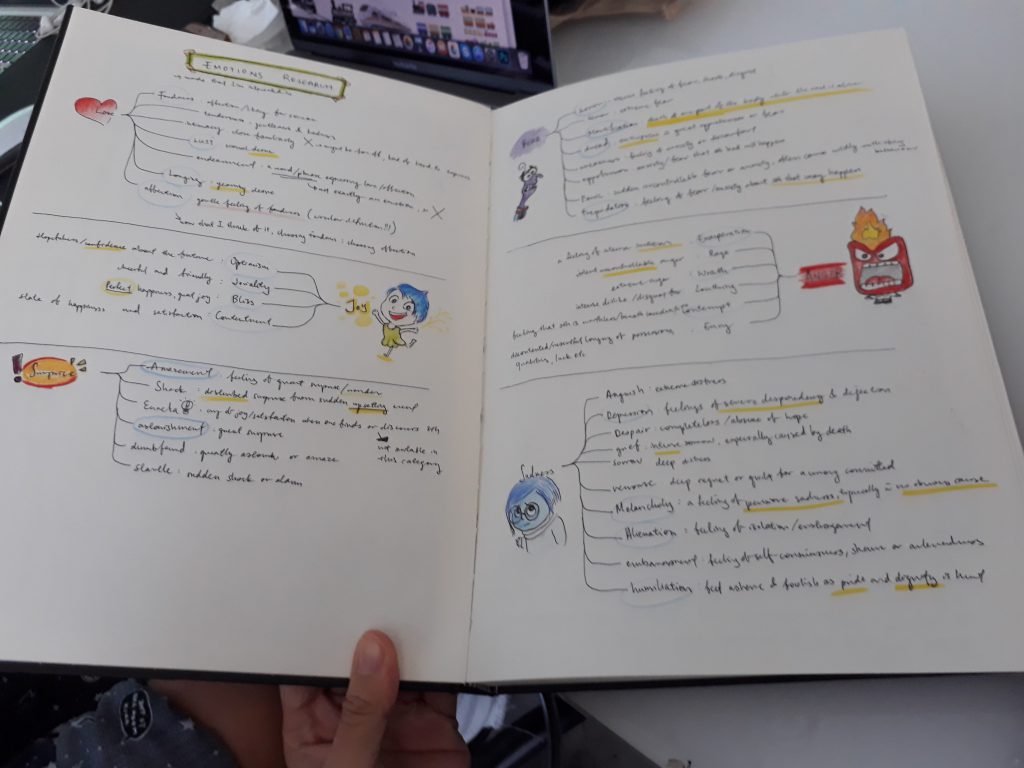 I wanted to get a clear idea of what each emotions represented. Hence I did several small mind-maps for each emotion category and researched on each specific emotion to ensure that my understanding of that emotion is correct.

The feeling of melancholy is something that I believe everyone can instinctively understand as the wrenching throb in the heart but troubles to eloquently put the emotion into words.  And so when I tried to express melancholy in my marks, I tried to keep the the marks to a minimum so that the empty space (the paper) gives a more pervasive feeling of hollowness and emptiness. 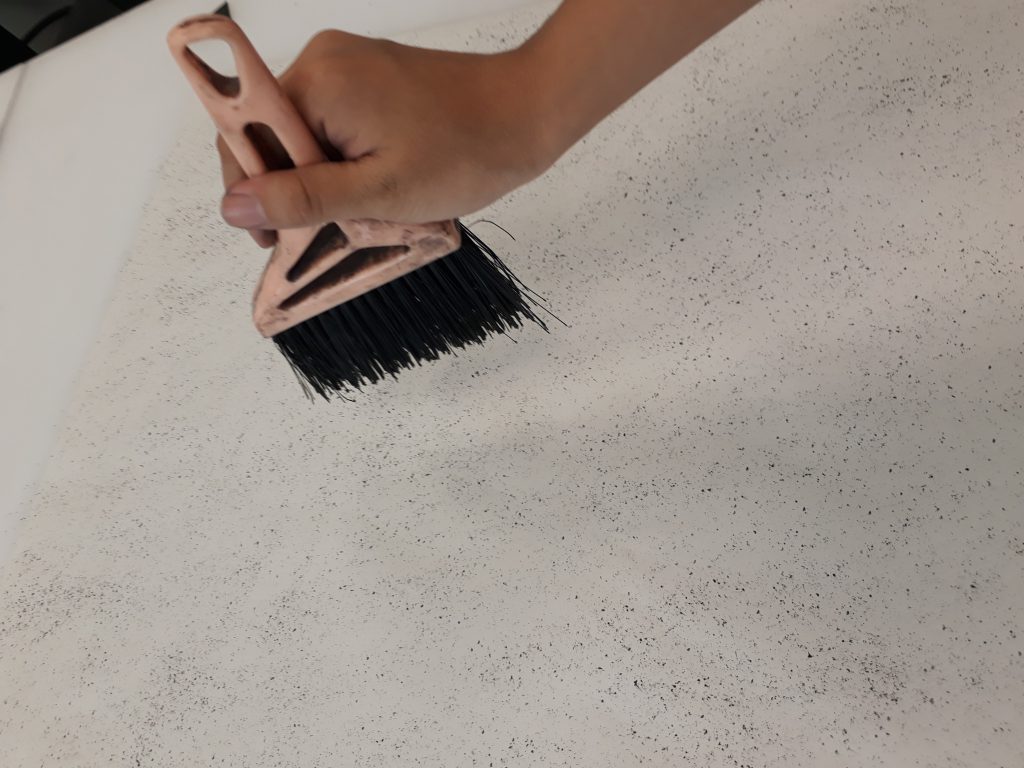 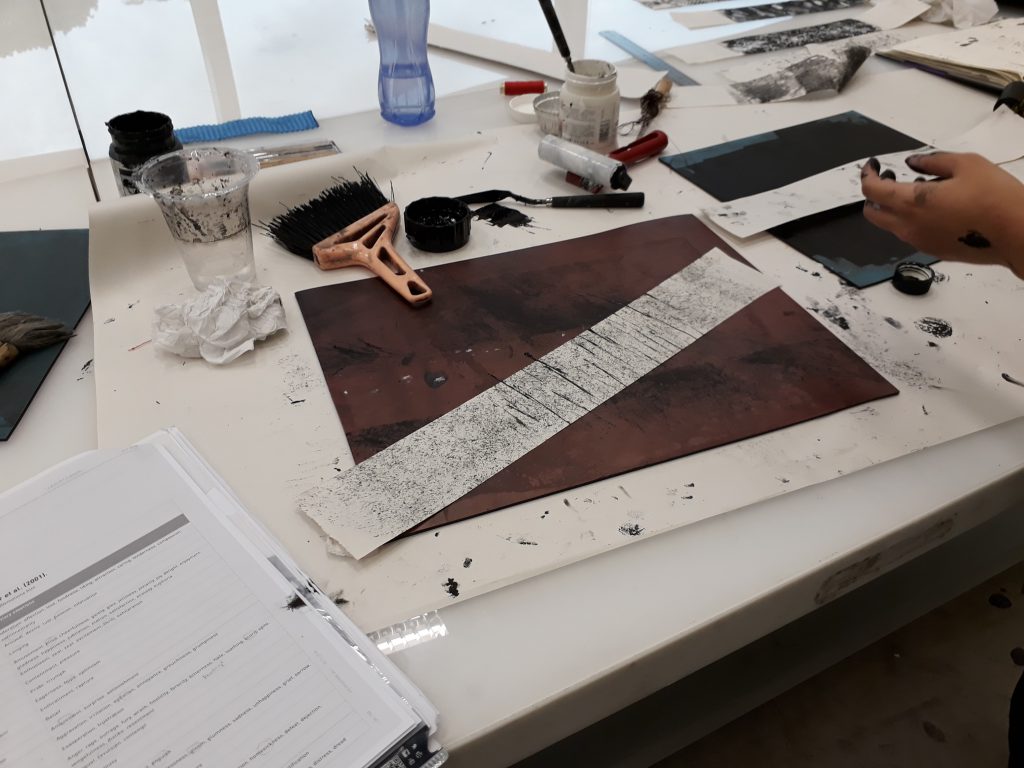 I made this by spreading glue around the paper first, and then sprinkling charcoal crumbs previously crushed. When the glue dries, only the charcoal is left behind, obediently following the trail of glue. I thought the idea was interesting, but I didn’t have any use for it in my final 6 emotions 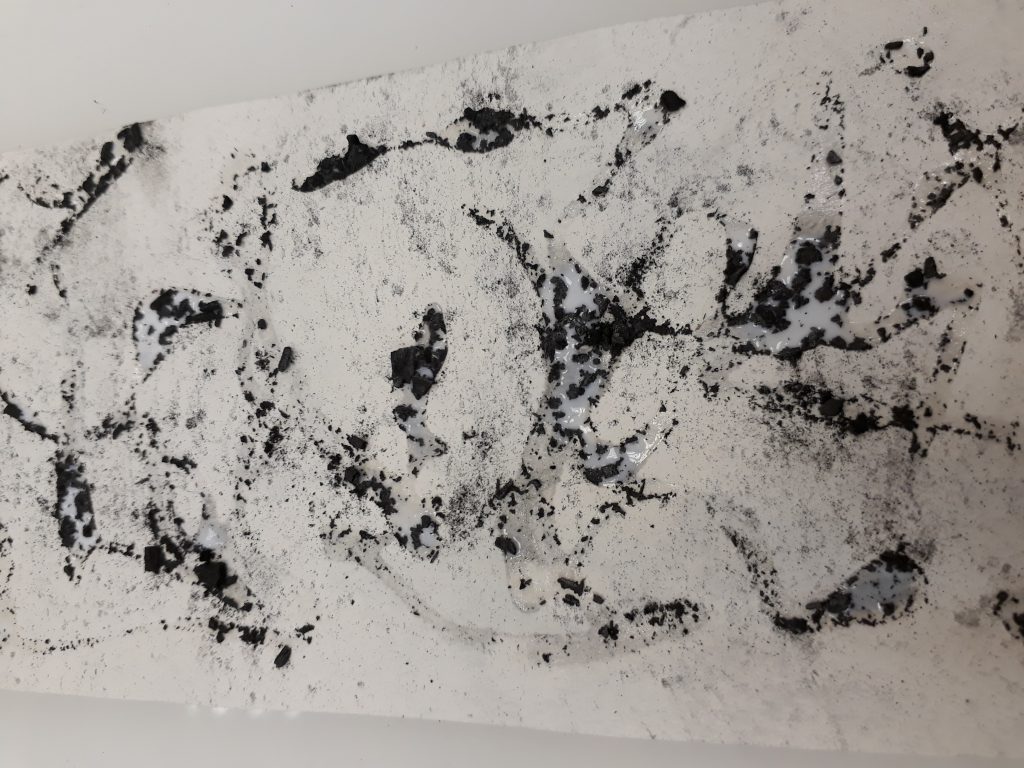 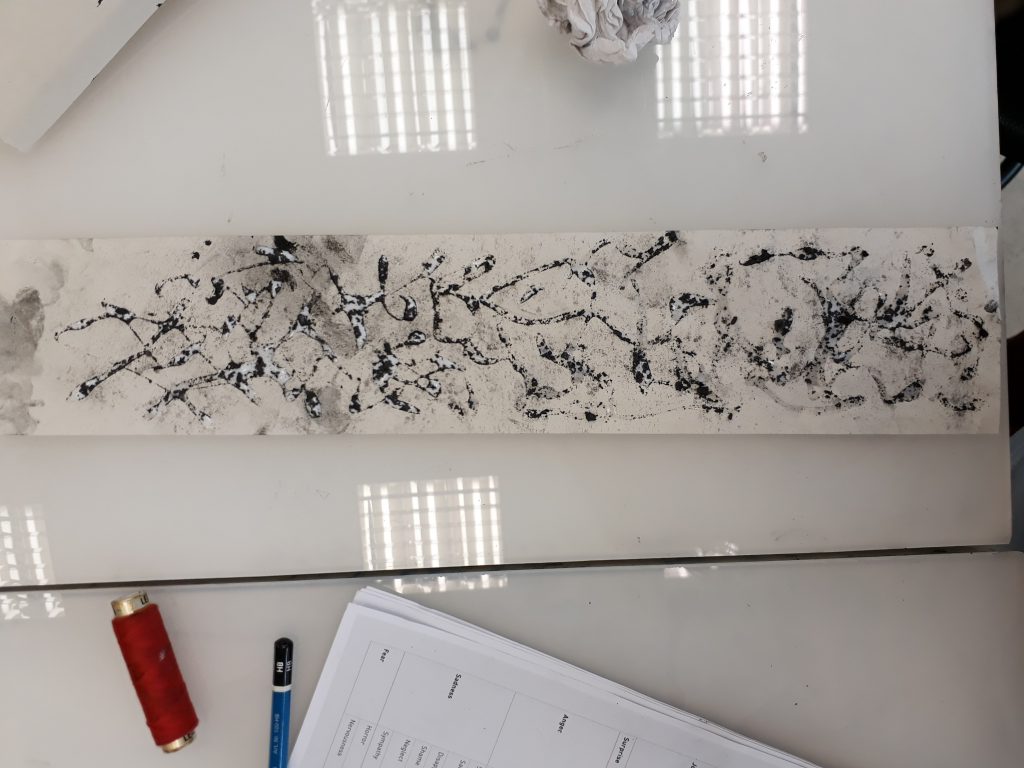 To see more of my process, please refer to my visual journal :DD

This was what I had after a week of experimentation: 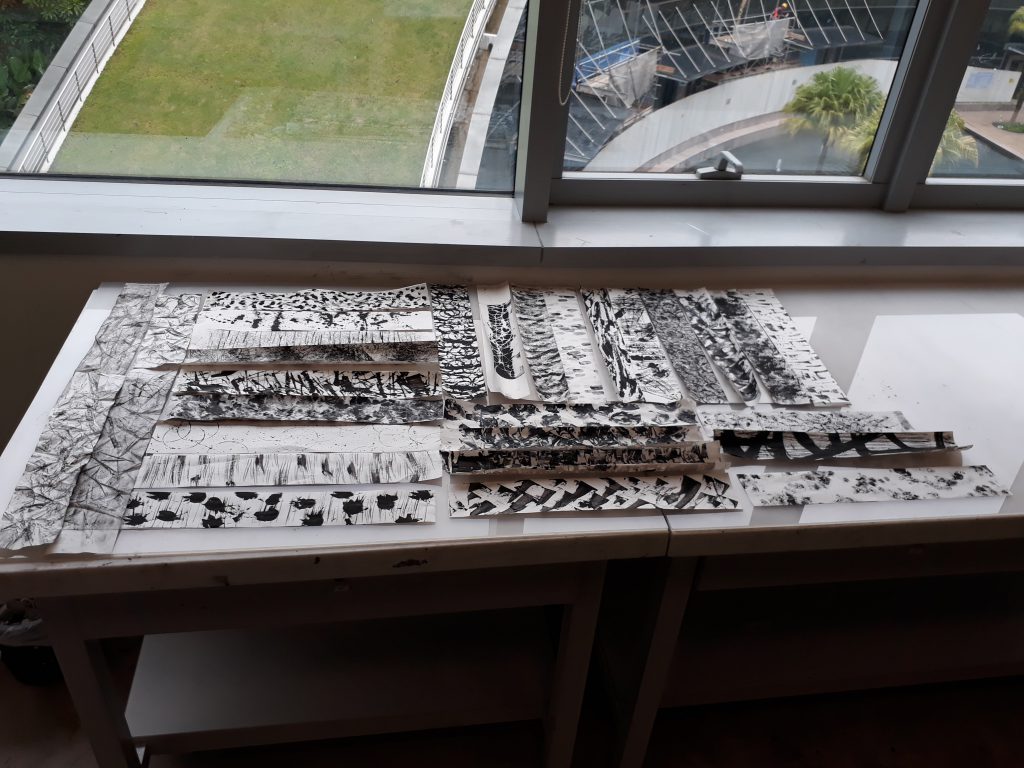 Working on my learning points from the consult, I continued experimenting with more emotions, specifically working on points raised during the consultation. 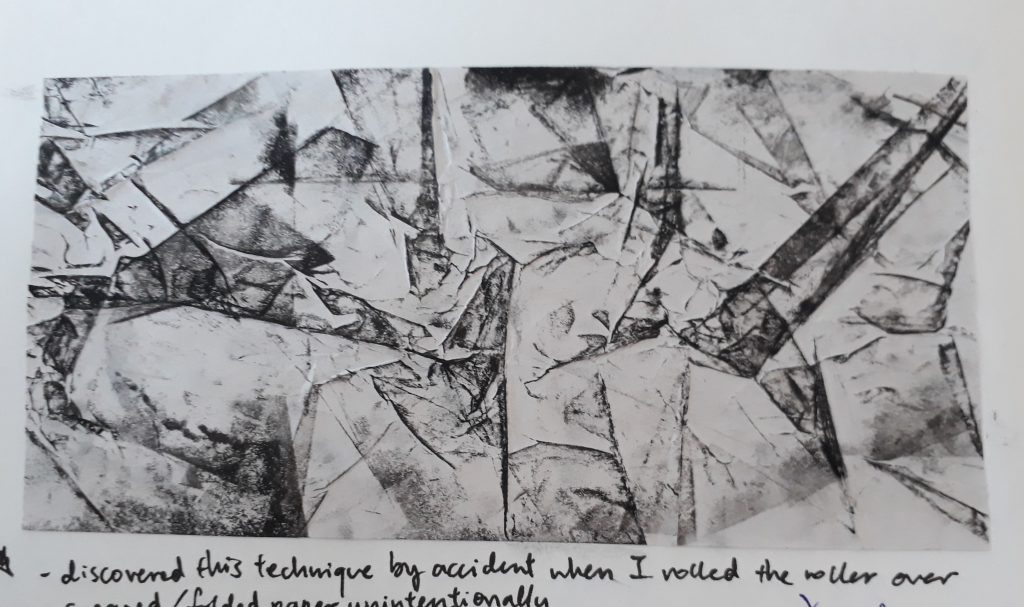 Initial idea was to simply roll a roller over crumpled paper

I decided to work on this idea by introducing newspaper as a medium to create a paper mache effect.

I brainstormed for a suitable theme to make my emotions cohesive and coherent when seen in a certain sequence. I had a few ideas off the top of my mind but they were somewhat random. At the end, since we are dealing with emotions in this project, I started to think about what emotions themselves signify. I felt that emotions are something very ‘raw’ and very ‘unique’ to humans. Yes, some animals can feel emotions as well, but they’re not as varied nor can they reach the same depth as human emotions can. Along this line of thought, I decided that I wanted to do something that ties in very closely to what makes a human human, which is how I arrived at my theme “life”. 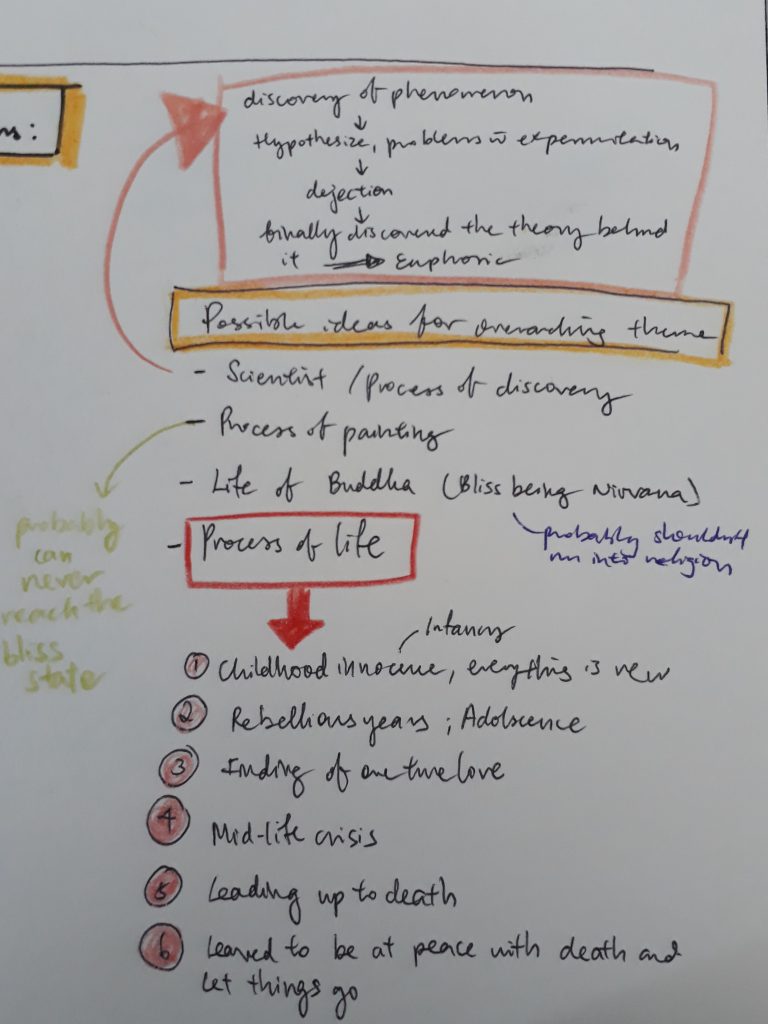 With this as my starting point, I started to narrow down emotions that I want to deal with. I identified the different stages of life and the emotions one most probably would have felt at that point in time:

(Check out the journal for the full description for each stage :> )

From my huge pile of emotions, I picked out 6 emotions most representative of what one would have felt at the six identified stages of life: 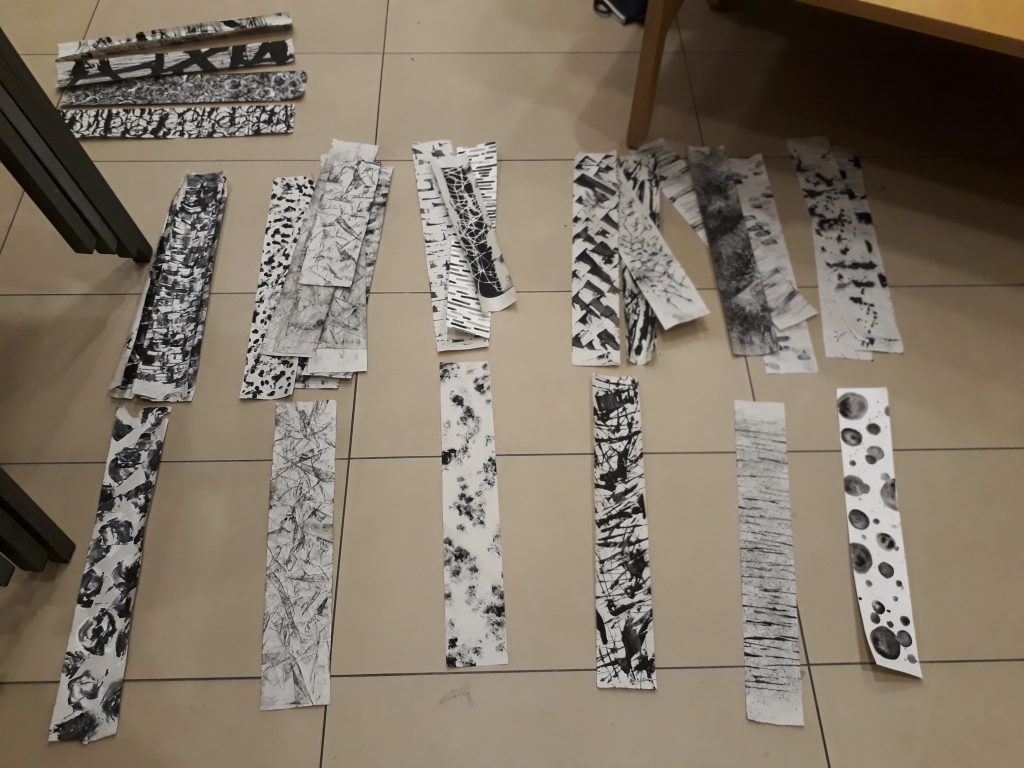 I went on making the final emotions used for submission. However, I realised that the same marks can never be replicated. Even subtle differences can make a big difference to the general mood the marks elicit.

In particular, I couldn’t get ‘Lust’ the way I wanted at all even after multiple, numerous, countless number of tries and kilos of paint wasted (just kidding). In a spurt of frustration, I folded a strip that I was doing halfway, intending to discard it. However, when I opened the strip, it dawned on me how perfect Warhol’s Rorscharch technique can be applied. I started experimenting more with this technique, constantly being pleasantly surprised whenever I open the folded paper. 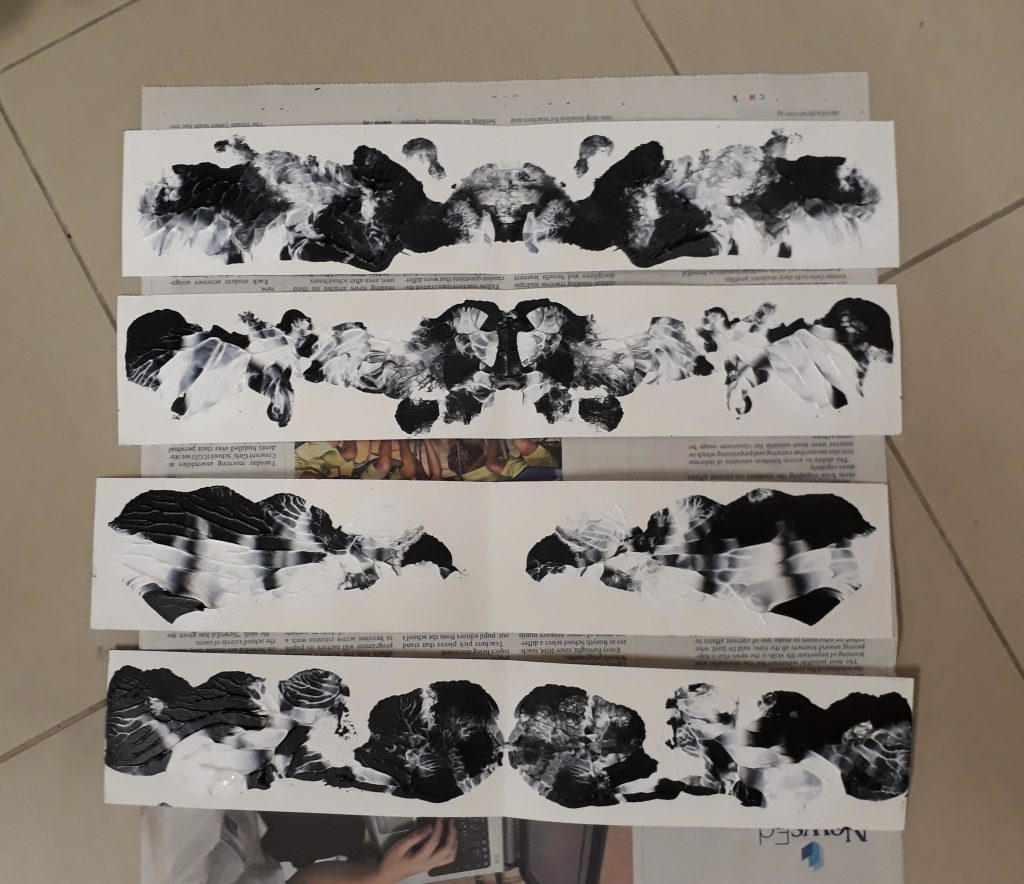 And so, one day before submission, I changed “Lust” to “Affection”, an emotion I thought best described the ink blot I made.

In the end, my final six emotions were: 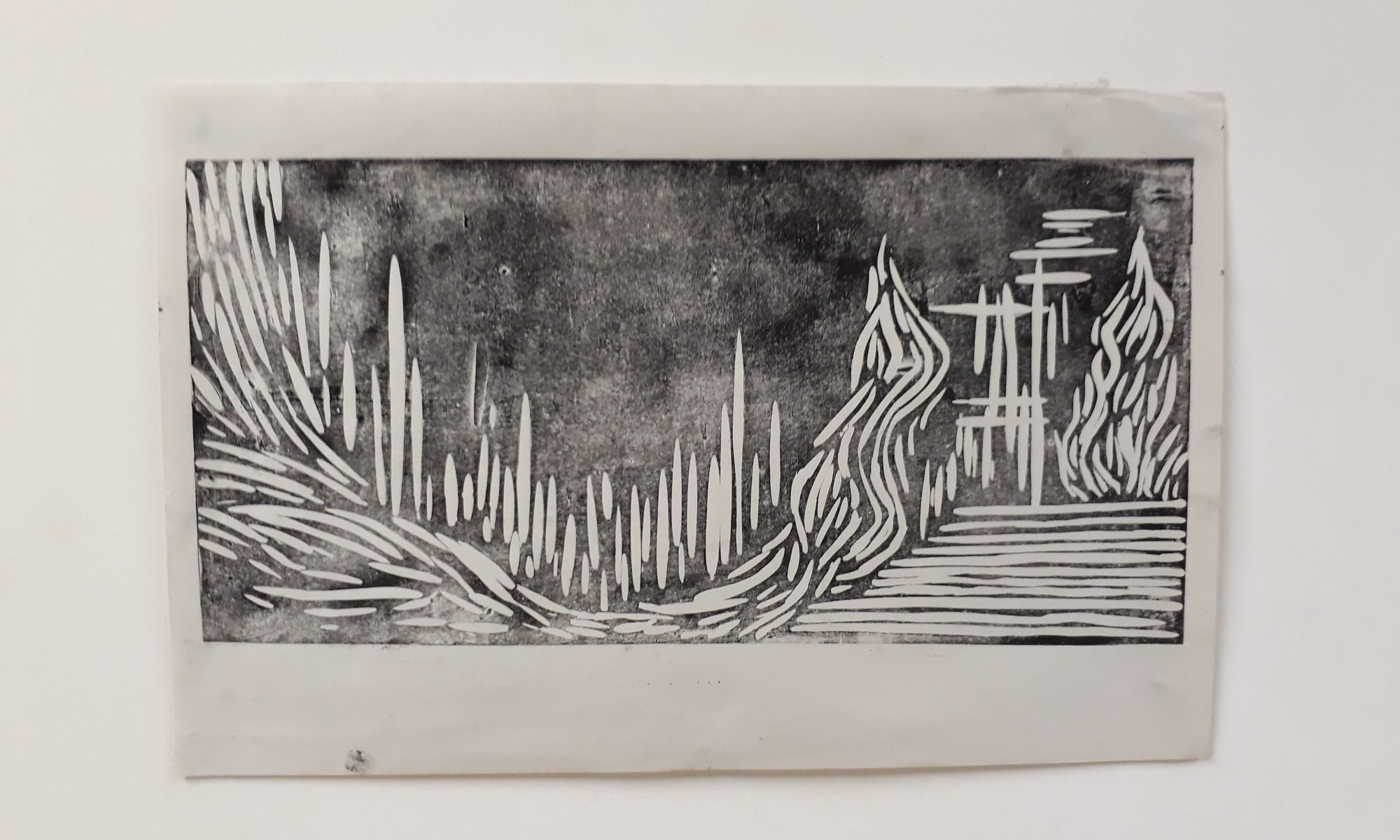 This week’s lesson was thoroughly enjoyable as I tried my hand at mark making. This was my first attempt at mono-printing and the printing machine, which were immensely interesting and fun!

Some mark making tools I brought to experiment:

Mimi told us not to bother about the aesthetics of our prints and to explore freely — which was what I did. Here are some prints I made: 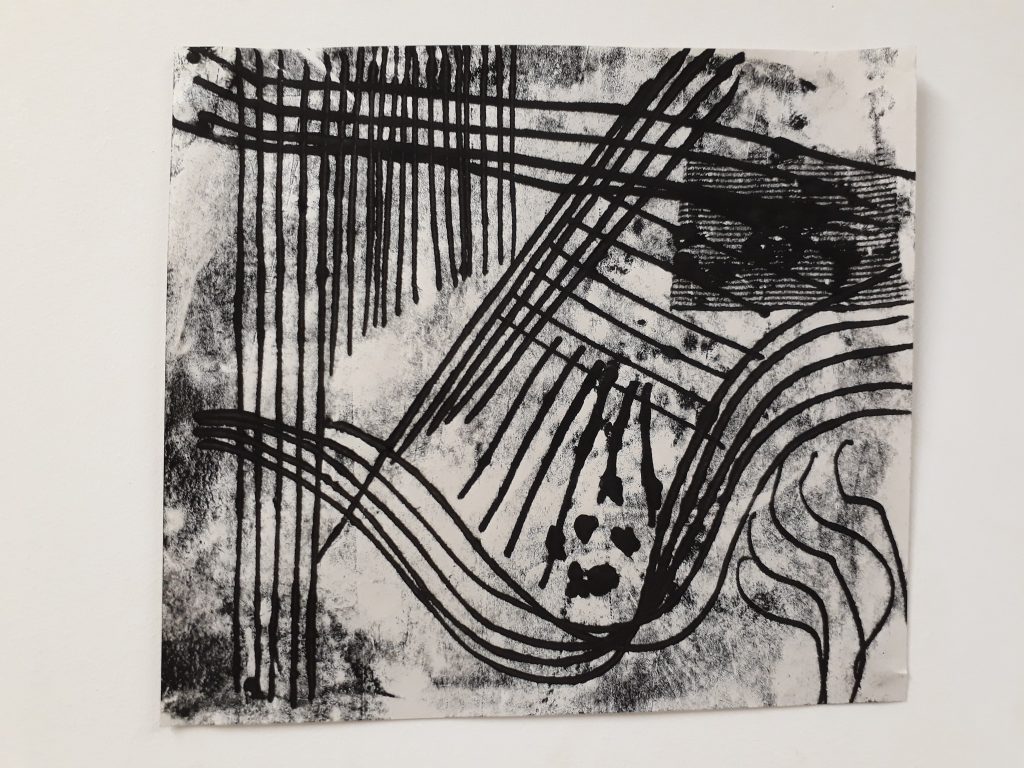 I managed to get the bold lines by using the handle of the roller. These lines feel very raw and strong — potential marks for the more intense emotions. Also, the mono-printing method is almost unpredictable because I’m just making the marks blindly without being able to see what I’m doing. 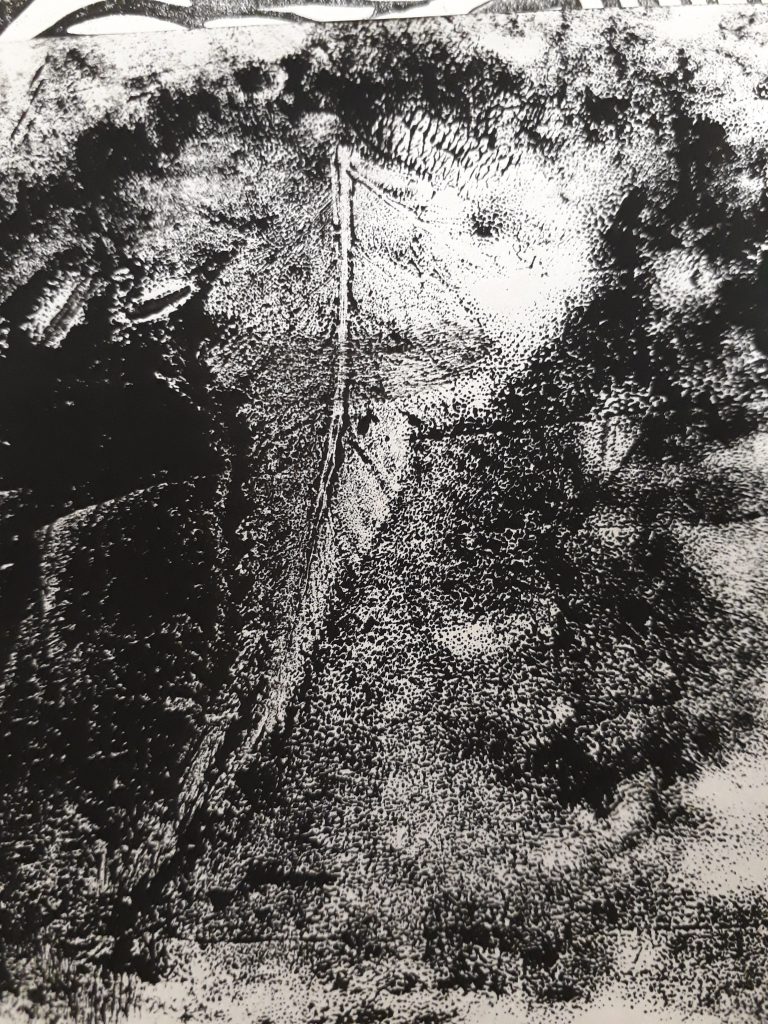 Printed a leaf! Can only vaguely see the shape and veins. And it’s too obvious that it’s a leaf — probably not very suitable here since we want to stay away from very literal/ representative marks. 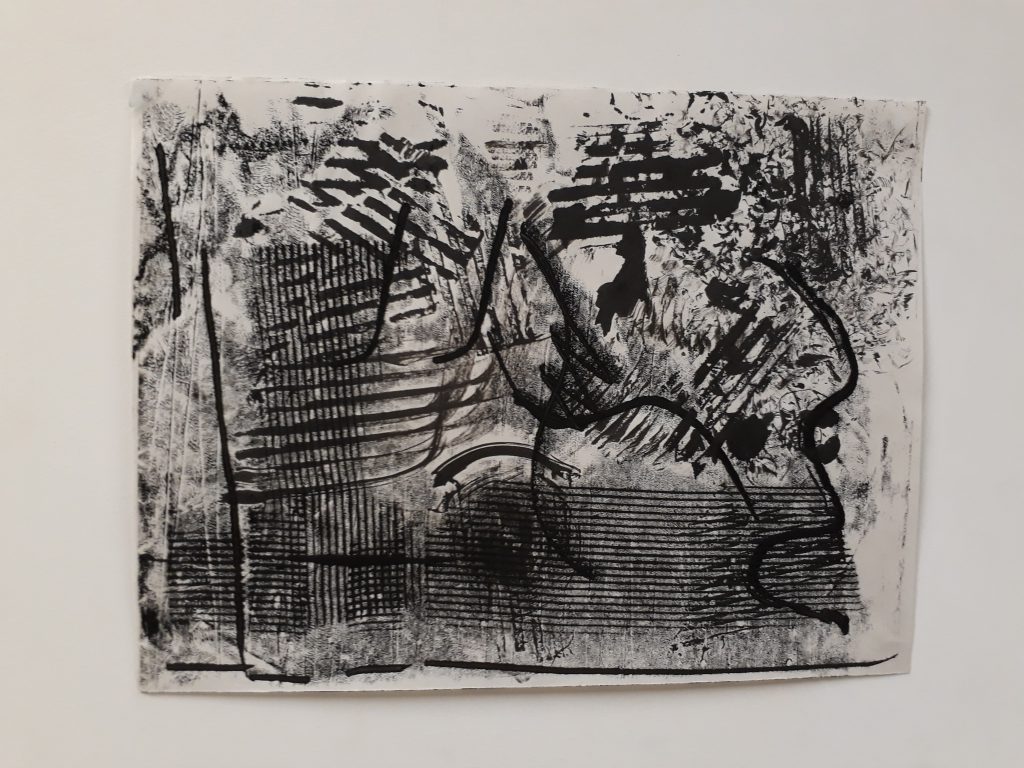 Experimented with the use of combs here. The neat rows of lines produces a very nice effect. The thick rows of lines were created with corrugated cardboard. 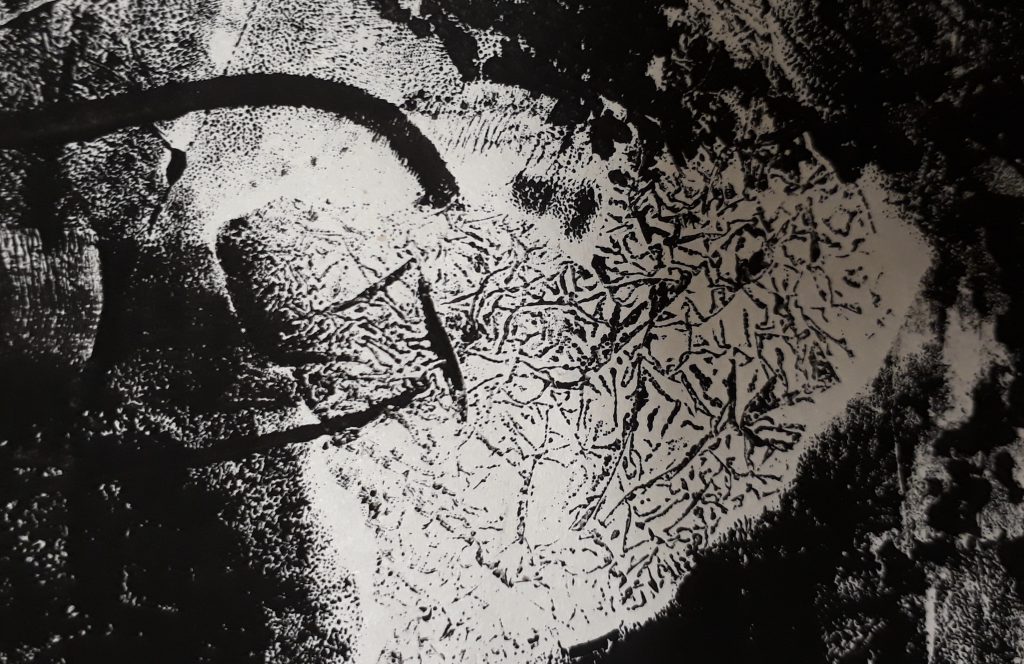 Prints of crushed aluminium foil! The effect is really cool if enlarged, but since it’s very condensed and crammed, it doesn’t look very nice from far. 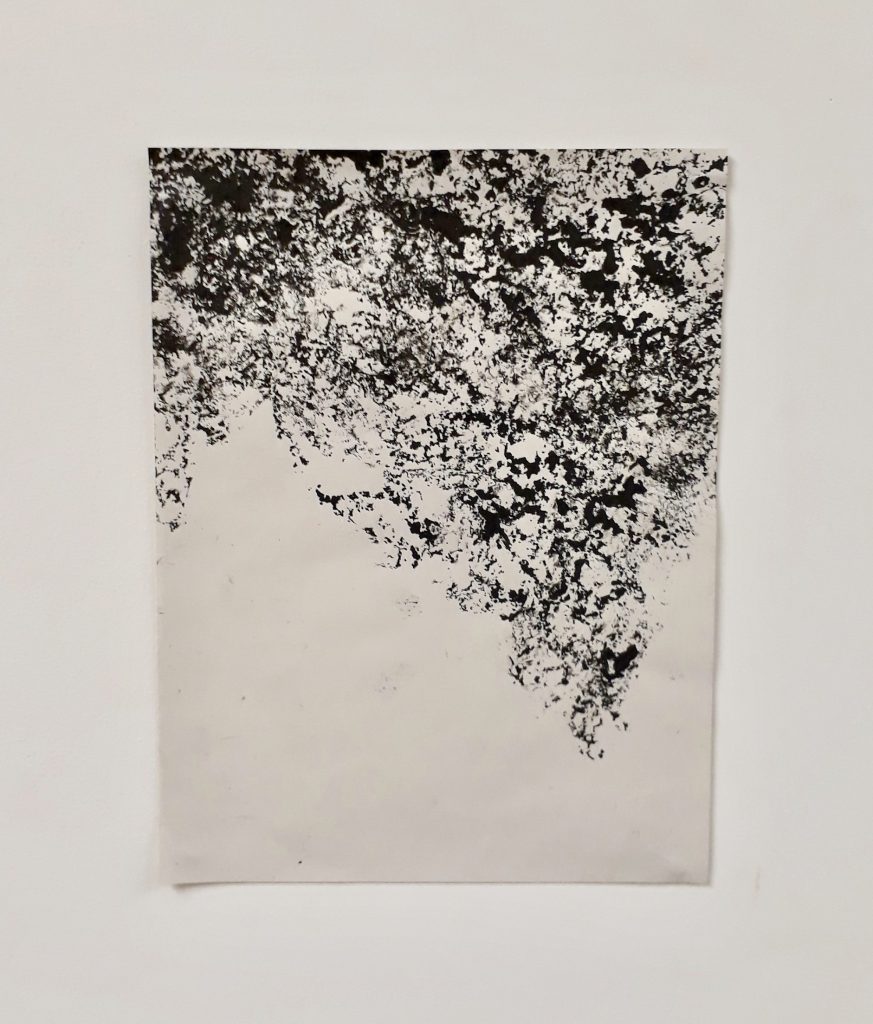 Marks made by dipping a rock into ink and rolling it around the paper. It’s quite beautiful, especially how the ink is concentrated and sparse in different areas. 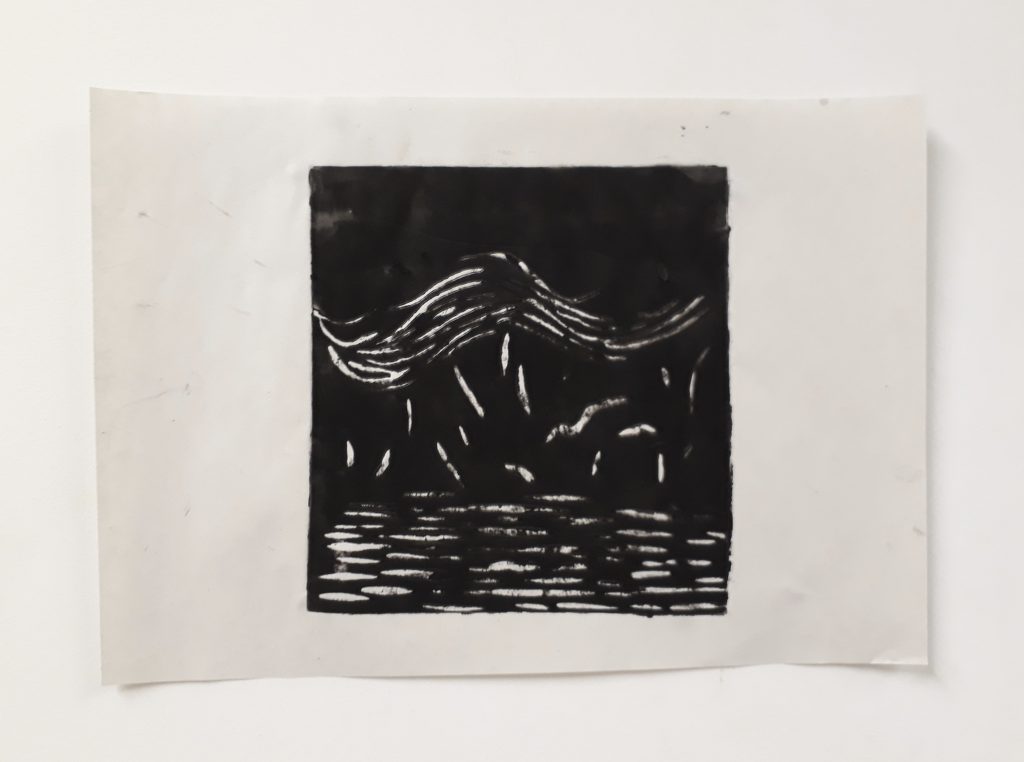 Linocut! First time working around with the tools. It wasn’t hard to cut the linoleum, but getting the shape/line I wanted was hard. The lines I cut also looked rather similar — the edges are all rounded. 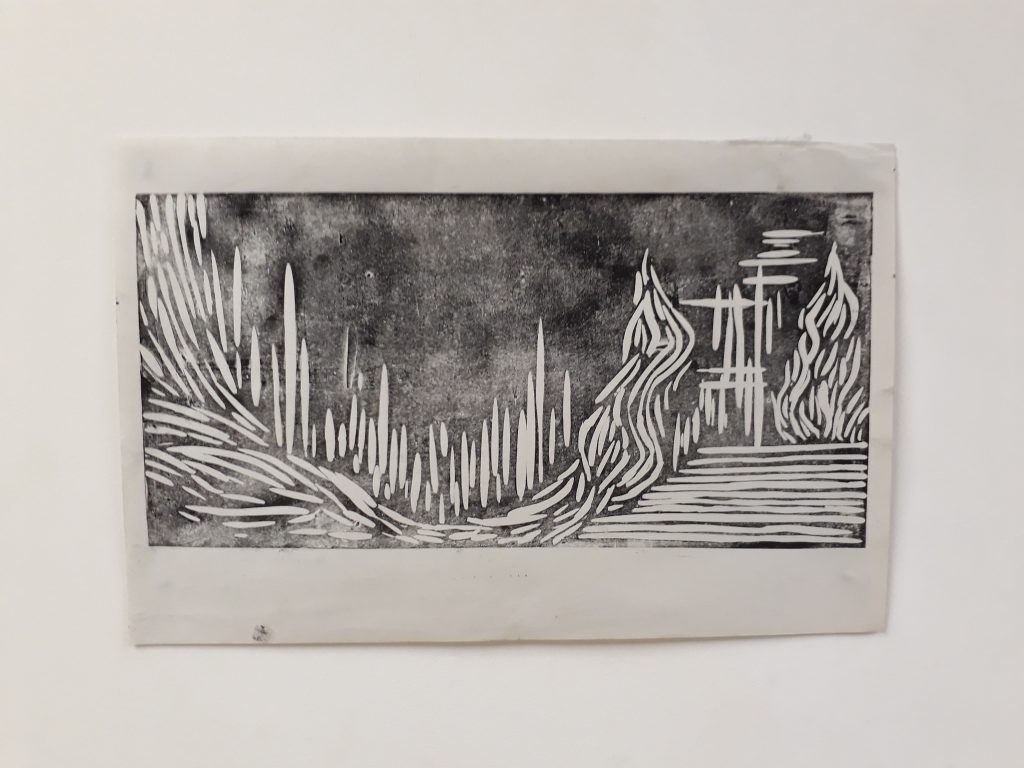 A linocut I made at the end of the class! I didn’t have anything in mind and was just cutting based on instincts. I’m very satisfied with this print :)  (though mildly annoyed that the print I rushed through with minimal thought turned out the nicest) 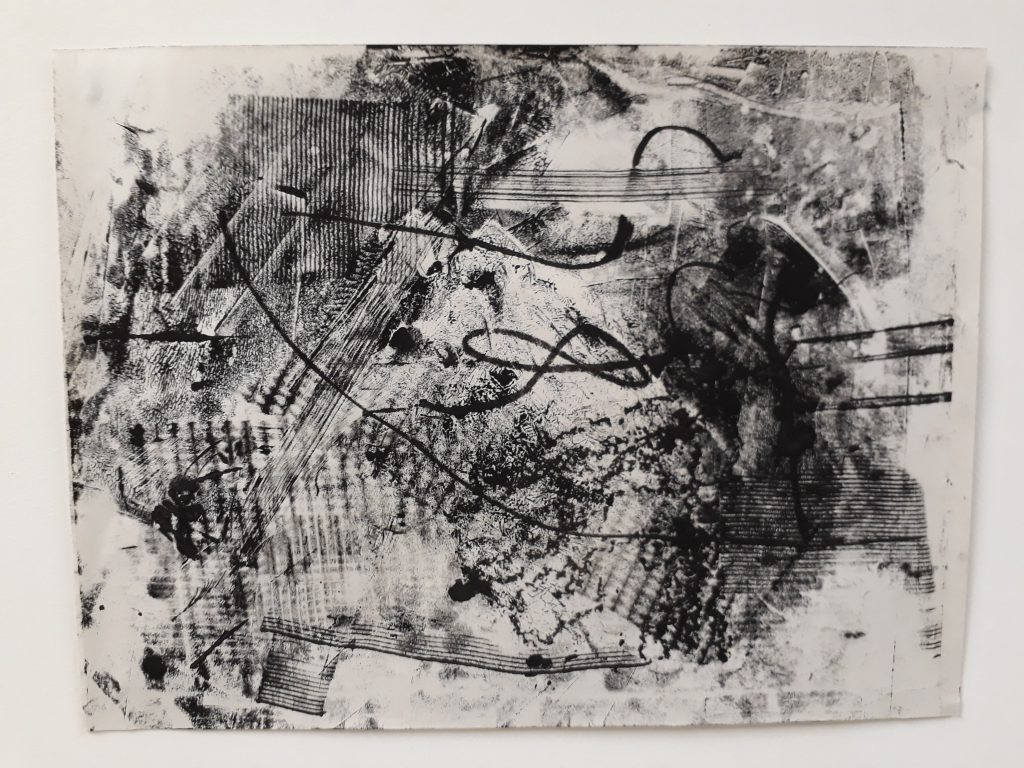 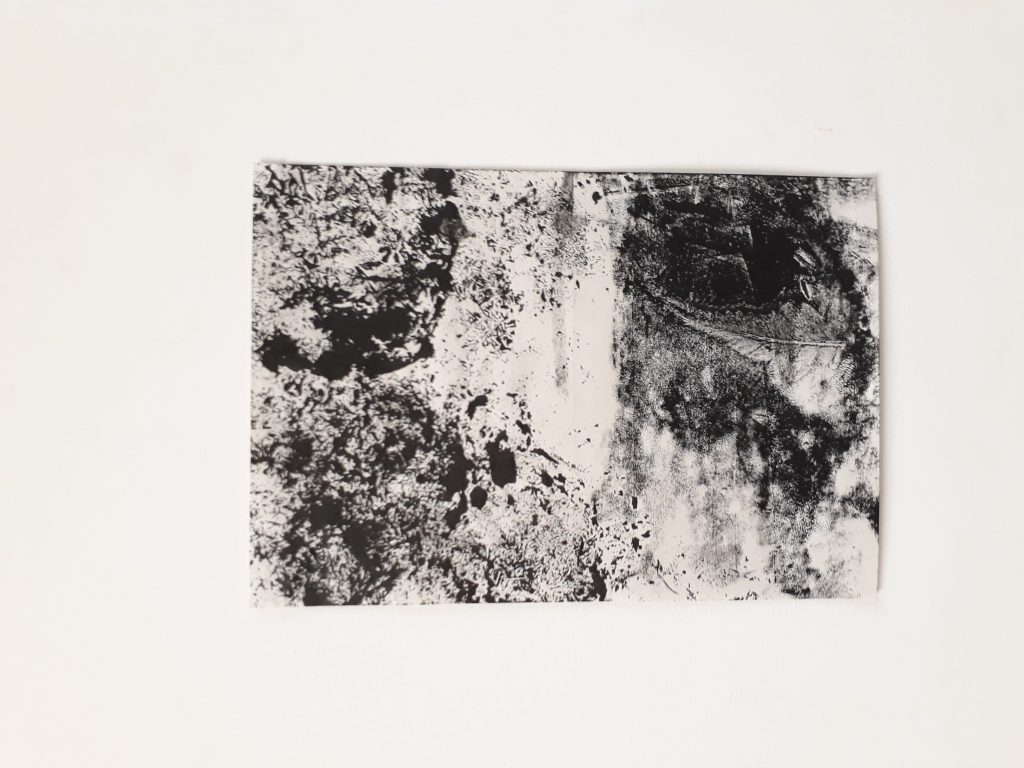 With this round of exploration, I’m more familiar with the tools and materials and how we can create different kinds of marks. I have a better idea of what this project is about and I’m ready to experiment and explore a lot more. Excited for the weeks to come! :D