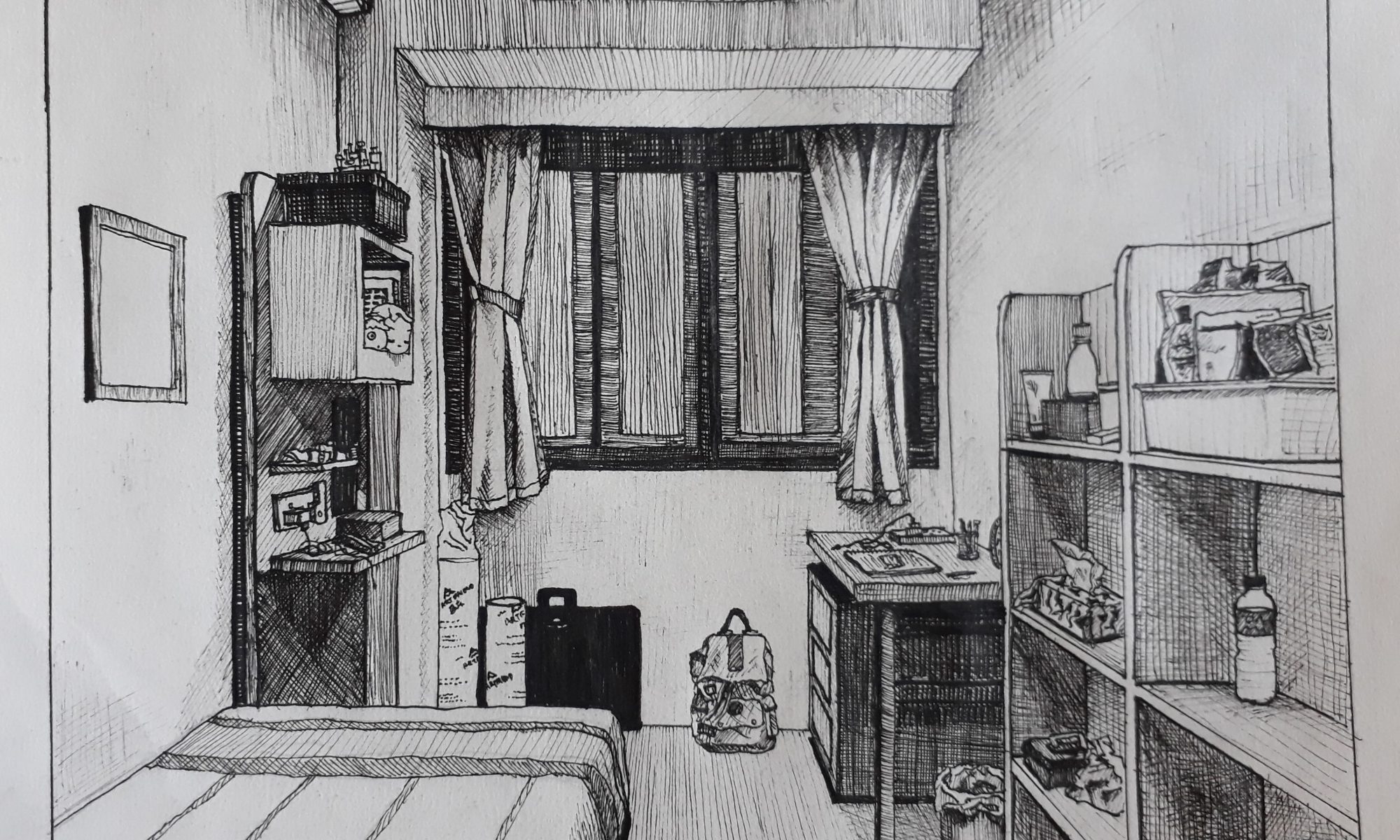 Here is the drawing of my room using the one-point perspective: 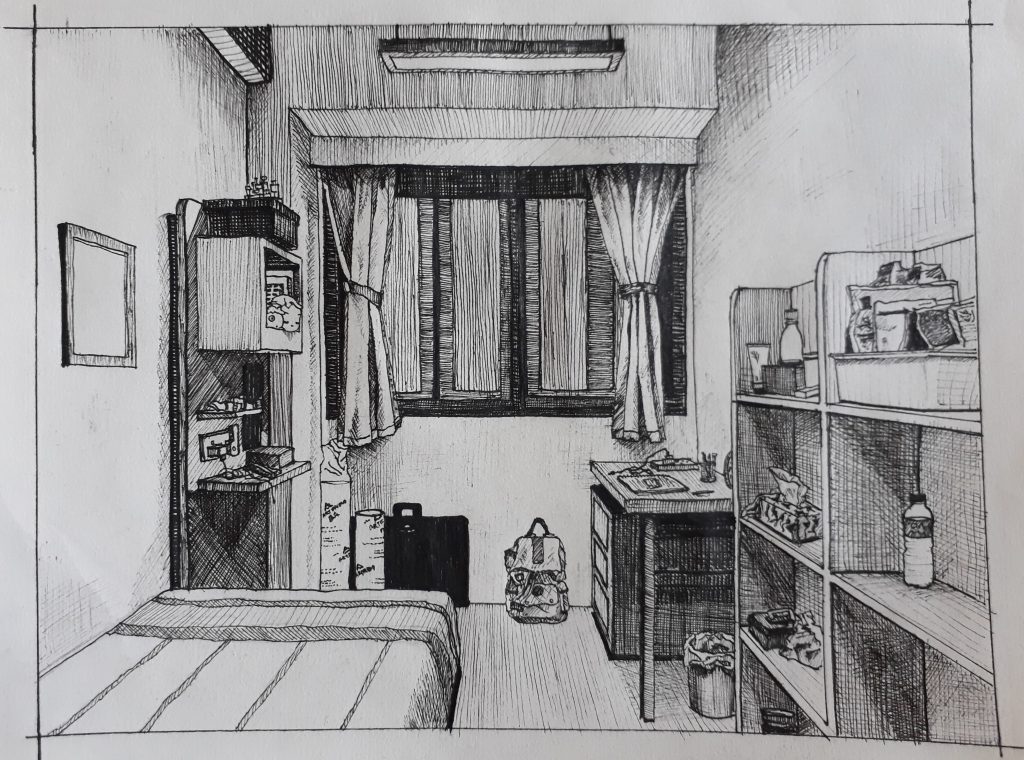 The drawing was more tedious than I thought and I spent quite long trying to get the angles of the lines right.

I first did it in pencil: 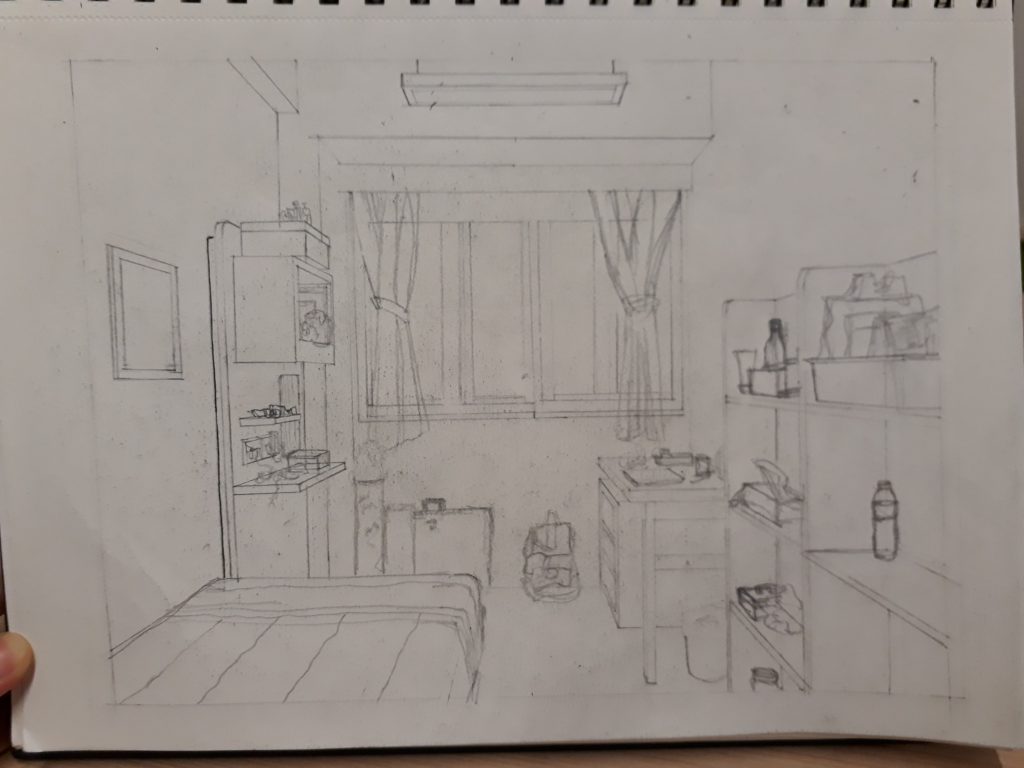 And then I inked it over: 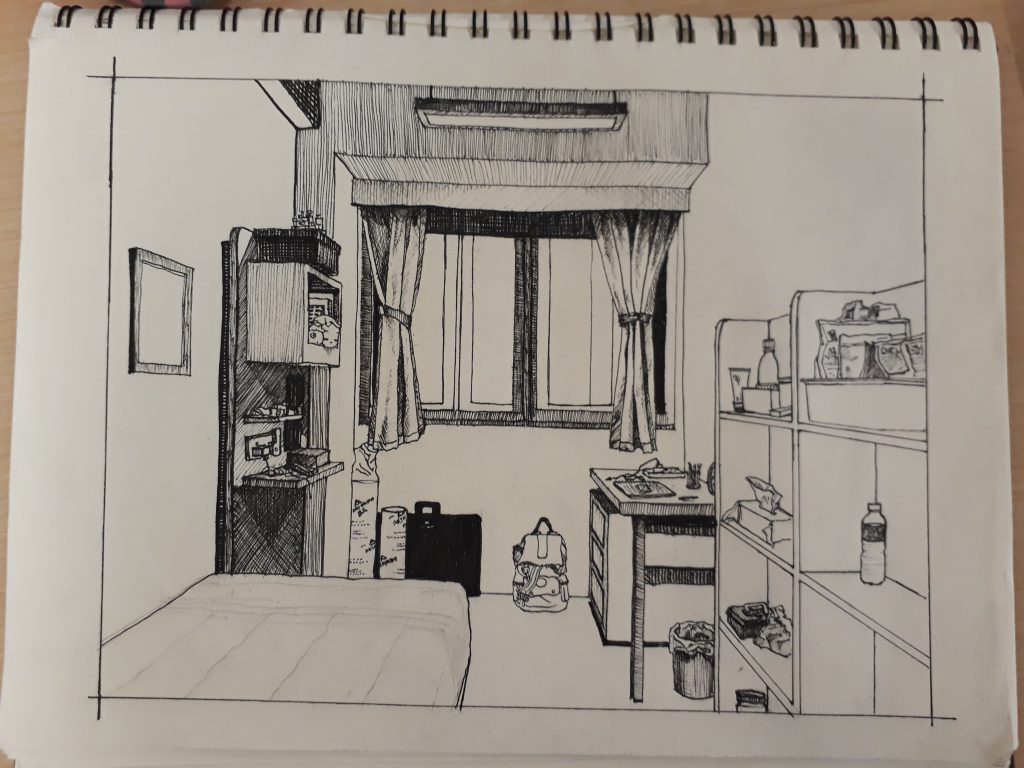 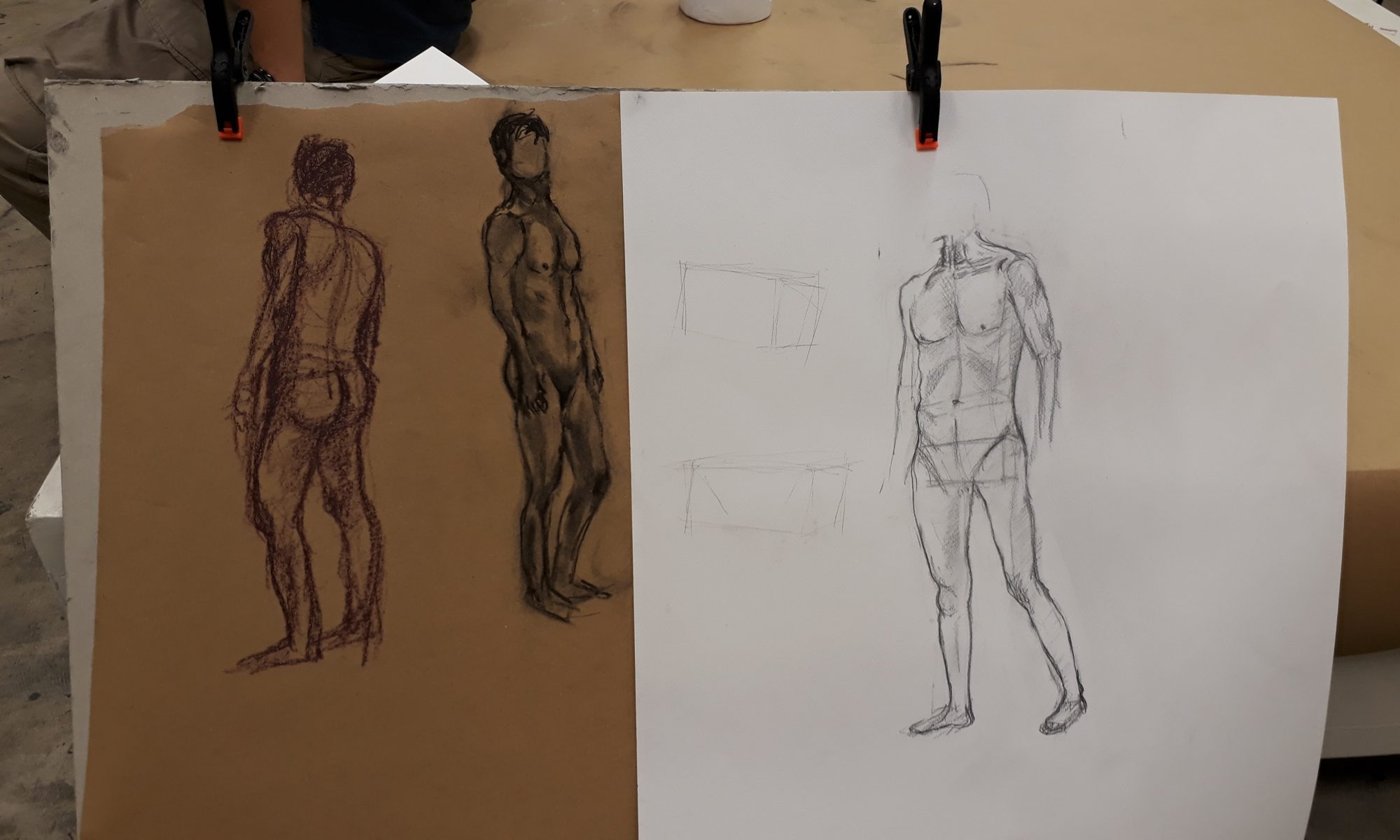 In the third week of school, we are already working on nude figure drawing! I was quite surprised as I thought we would be working more on still-life setups as well as learn the human anatomy before actual moving on to real life models.

I thought that Prof’s method of teaching was quite effective. For basics, he instructed us to focus on the torso and taught us to construct its shape by using two boxes — one representing the upper body while the other representing the pelvis.

For the upper body box, the upper edge is to be extended from the hollow located along the clavicles (collarbone) at the top of the shoulder while the bottom edge is to be aligned with the ends of the ribcage.

For the pelvis box, three points are to be first identified: two points at the ends of the iliac crest and one at the pubic bone.

Interestingly, when a human is standing, the upper box will be tilting backwards instead of being upright or inclining forward. This is often overlooked, even when I tried to sketch later on.

Easier said than done! Even though the theory sounds extremely simple, when I tried applying it I found that just getting the proportions of the boxes right is a big enough headache. It is difficult to pinpoint from the nude model where the boxes starts and ends and what their orientation in space is.

Quick sketches I did: 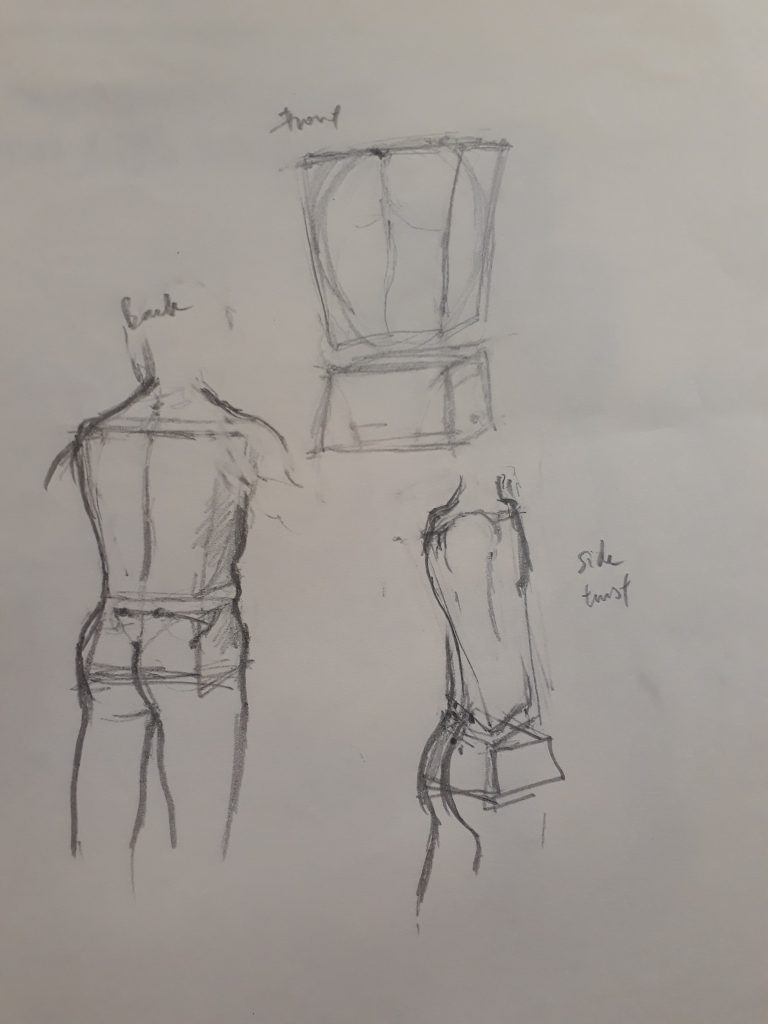 Proportions feel rather off here. Also, I did not know that the boxes should be rectangular instead of taking a trapezium shape. In the bottom right sketch, I was confused by the twisted torso of the model and thought that my boxes should be distorted as well. However, Prof told us later that we should be thinking of the boxes themselves as representing immovable blocks (we can’t twist our ribcage or pelvis after all). What gives rise to the idea of the ‘twist’ is by displacing the alignment of the top and bottom box.

We sketched for longer periods after: 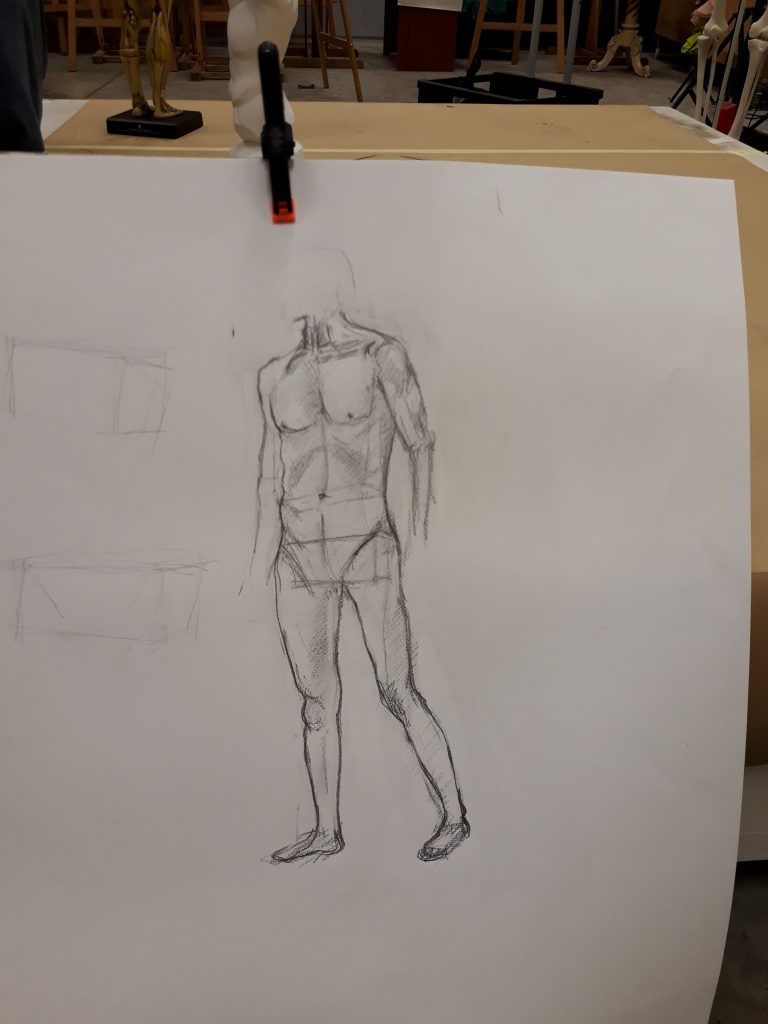 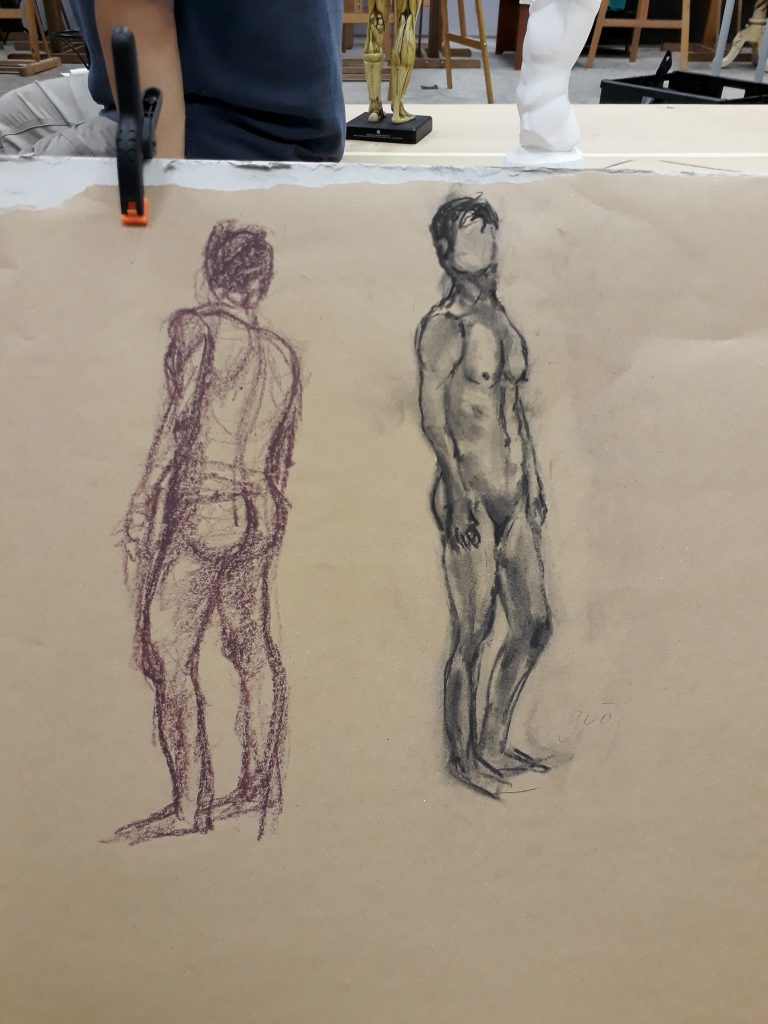 I hope there’s a lot more figure drawing sessions to come because it feels like it is very hard to master and will require loads of practice. Hopefully, through better understanding of the human anatomy and techniques to figure drawing, I will get better and faster and more confident at it :)