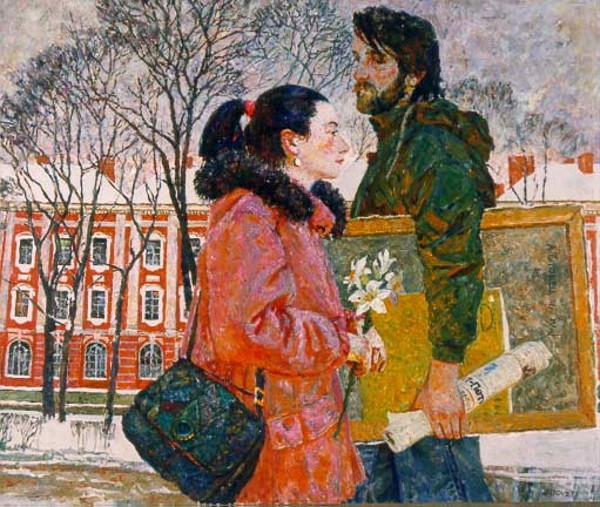 Aleksander Titovets is a Russian Painter who has painted a little over 26 years in his life. He partners with his wife, Lyuba Titovets to share a studio in El Paso, where he aims to develop the thriving art scene in El Paso. 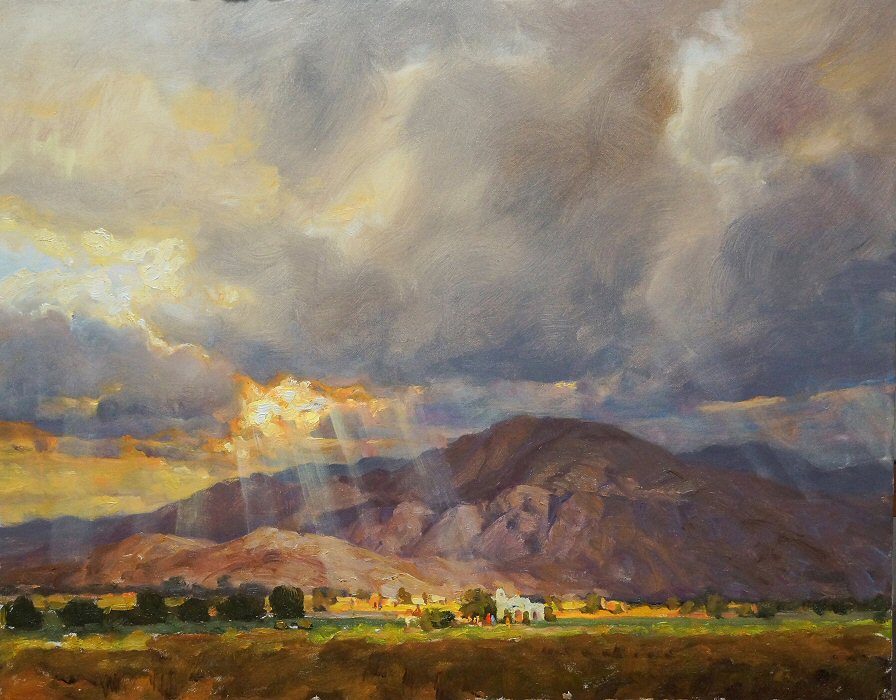 This piece of artwork is breathtaking. The well-composed piece, due to the good use of rule of thirds, draws viewer’s attention to not only the sun rays, but also the houses that are brightened by the sun light. The mountain provides good contrast between the sky and houses, completing the image in a single setting. The magnificence of the dark, dull sky is balanced by the subtle array of houses that occupies the foreground. The clear distinction of foreground, mid ground and background can be seen in this painting, and I really enjoy the interaction between the background and the foreground. The subject, in this case, may be a tough call between the mountain which sits perfectly in the rule of thirds, or the houses that occupy the foreground. In my opinion, in view of the artist’s juxtaposition of his artwork, I would say that he placed more emphasis on the houses that are being shined on. There are also subtle leading lines created by the clouds towards the background, and the tones presented in the oil painting helped create a sense of depth. 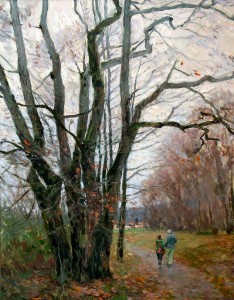 This painting is of a scenery, replaces negative space with leave less tree branches to bring across the idea that Autumn is approaching. The painting is not cluttered with elements, but is rather focused on two individuals strolling down a long grey path casually. There is almost no sign of stress in this painting, as the two enjoy a slow and carefree walk along the long and narrow path. The artist uses faint leading lines, and creates a subtle background to extend the viewer’s perception of how long the path is. The mountain in the background helps create this effect. The controlled use of colours help provide a calming atmosphere in the picture. 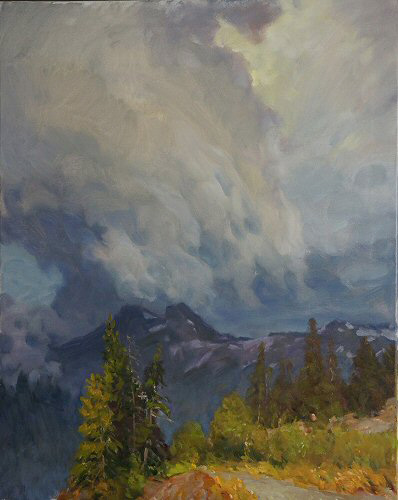 The mountain sits in the third of the image, blowing out what seems to look like volcanic ashes, or they could be clouds brewing in the background. The carefully composed pictures draws a lot of attention to what is happening in the background. Although there is a lot of colours and details put into creating the foreground, the focal point of viewers is pulled towards the extensive strokes of the brush in the background. The use of tonal values creates a magnificent effect for the viewers. Titovets creates a leading line through the painting of the road to draw the viewers attention to what is happening on the mountain. 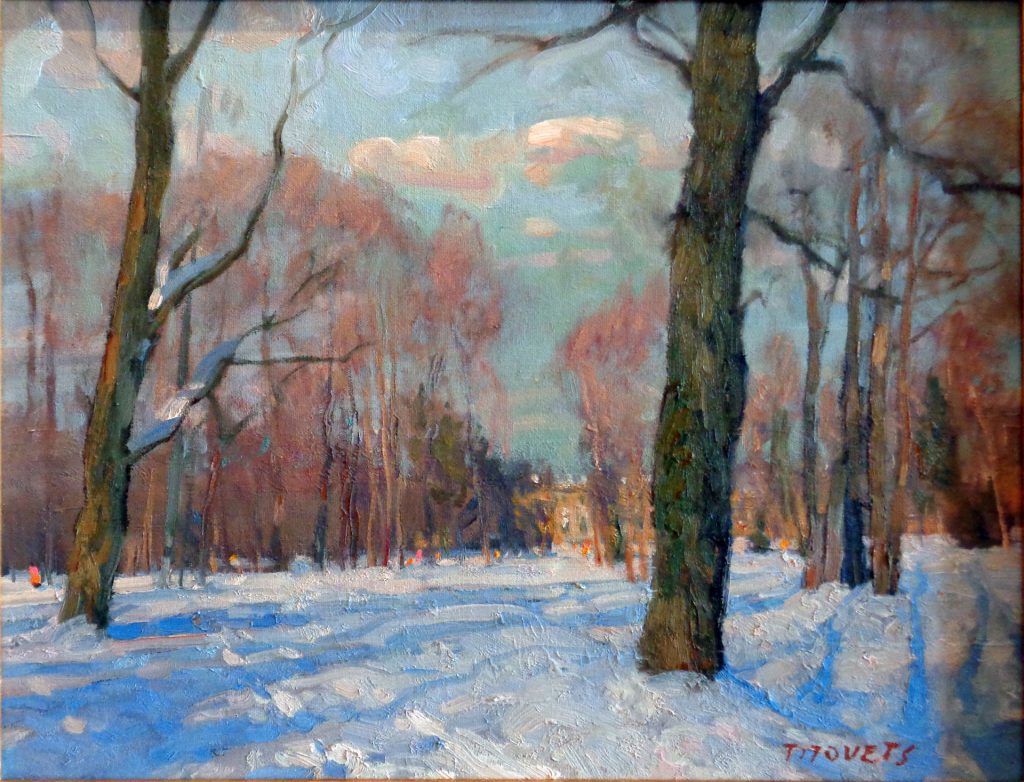 Corner at the park, with simple composition of still life. The snow is drawn carefully, with shadows indicating a multitude of trees that is behind the artist. The artist is sat in the cold, icy park facing a line of buildings. Though there is no specific subject matter, there is a deep emphasis on the snow on the ground occupying both the foreground and mid ground. The foreground is well toned, with clear indication of shadows. A very simple looking yet complicated piece of scenery painting, Corner at the Park brings about a sense of absence, yet filled with the element of trees that are about to change leaves according to the season. 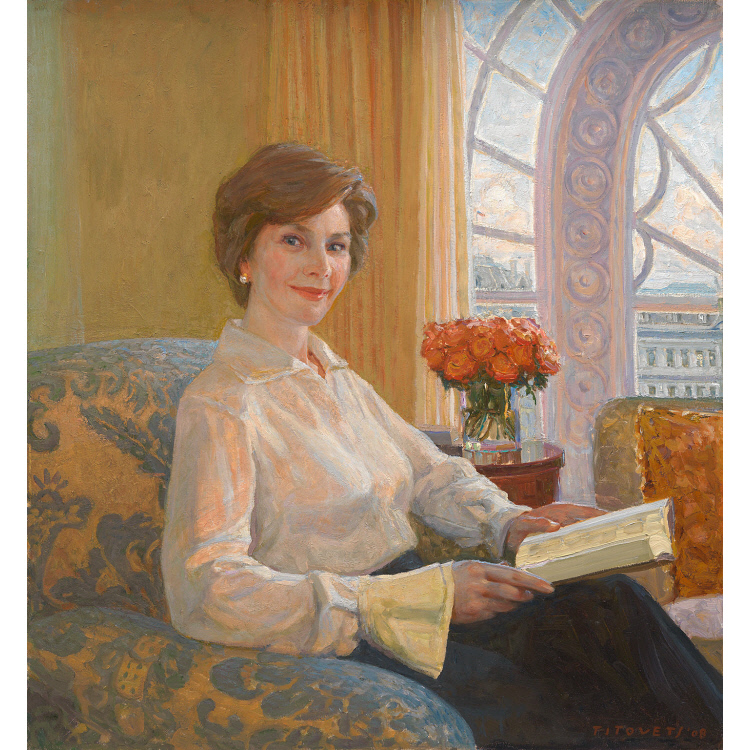 Sitter, Laura Bush, opening a book with a gaze at the artist, Titovets. An almost full body painting of Laura Bush, the artist carefully captures her in the foreground, with a vase of flowers in the mid ground, and buildings outside of the windows in the background. The clear detonation of spacial awareness brings the painting to life. There are clear indications of shading and toning, adding to the realism of the painting. The artist is very detailed with his strokes, and does not skim through on the details on the couch and even the reflections on the table holding the vase of flowers.

This is one of my favourite piece by Aleksander Titovets. The two subject matters, shown as walking past one another, tells of a story that can be widely interpreted. The artist in the back, holding on a set of rolled newspapers with a canvas, can be seen staring at the lady in red who is holding a stalk of flowers. His almost raised eyebrow look gives off a sense of sadness, showing interaction between the two subject matters. The composition removes any unwanted focus taken off from the subject matter, and the painting is well toned, adding a sense of realism to the subjects. 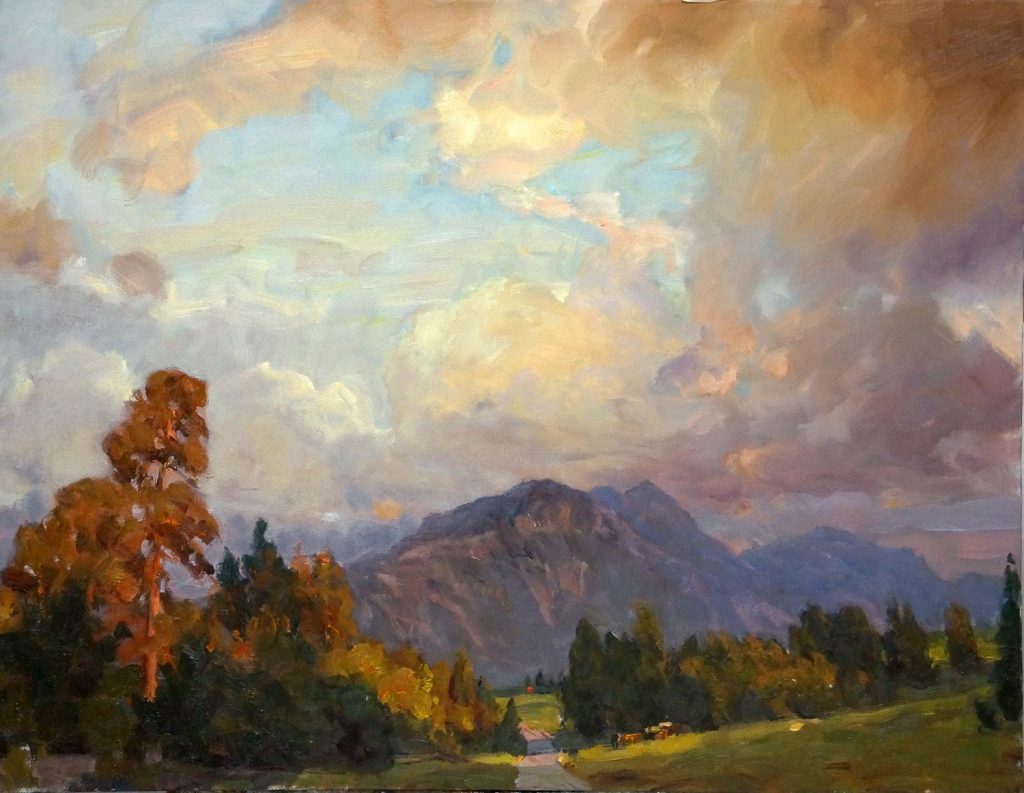 Another scenic painting, one of each that holds its own sense of intrigue and surprise. Titovets works are not repetitive, instead refreshing and provokes thinking in every new painting. The tinge of yellow in the right top corner of the painting is striking, and diversifies the shades of the sky in this painting. The forest does not hold much presence in the drawing, and the viewer’s focus is drawn to the mountain and the vast skies behind and on top of it. The artist’s sense of time is clear in the painting as it shows sunset. A still life drawing with a combination of roses and peaches. The drawing uses rule of thirds, in which the artist brings the viewer’s focus onto the roses held in the vase, with a peaches littering the tabletop. The artist’s usage of values and tones brought out the reflective surface of the table. The roses are painted in bright, vibrant warm colours to contrast with the background and tabletop. With great detail, the artist was able to even show that there was water held in the vase. 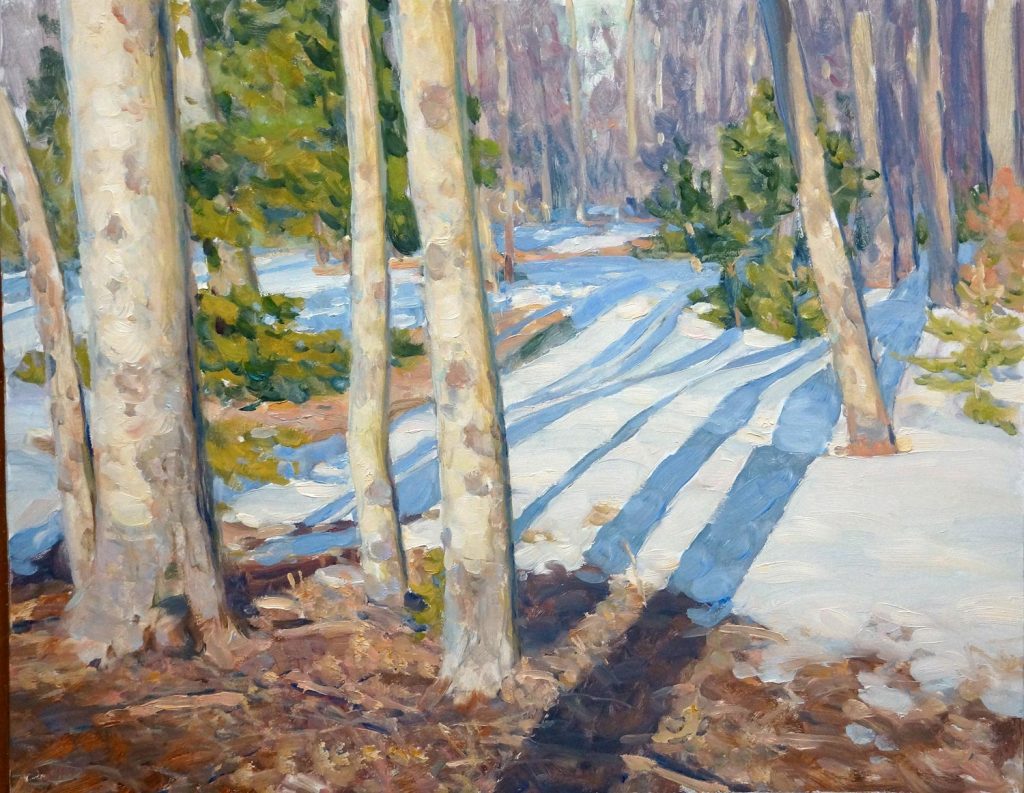 This piece of painting is composed in such a way that the silhouette of the trees seem to be the main focus. There is much focus on the details of the texture of the trees, suggesting that they, together with their silhouettes, are the focus of the artist. The silhouettes extend from the foreground to mid ground to the background, and this first shadow closes to the foreground seem to appear from behind the artist, and the cropped out effort encourages viewers to think about the setting of the painting. 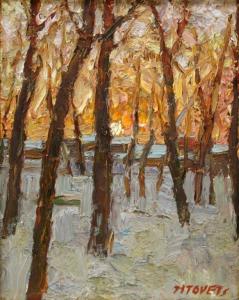 This composition is similar to that of Spring is near, such that he paints the trees in leading fashion towards the background. The short strokes and expressive lines suggest that Titovets is trying to draw emphasis on the leaves of the trees. The painting is lightly toned, and it can be seen that the artist uses a tinge of green to draw contrast in the foreground. The linework is expressive yet not messy, and there is a clear depiction of foreground and background. 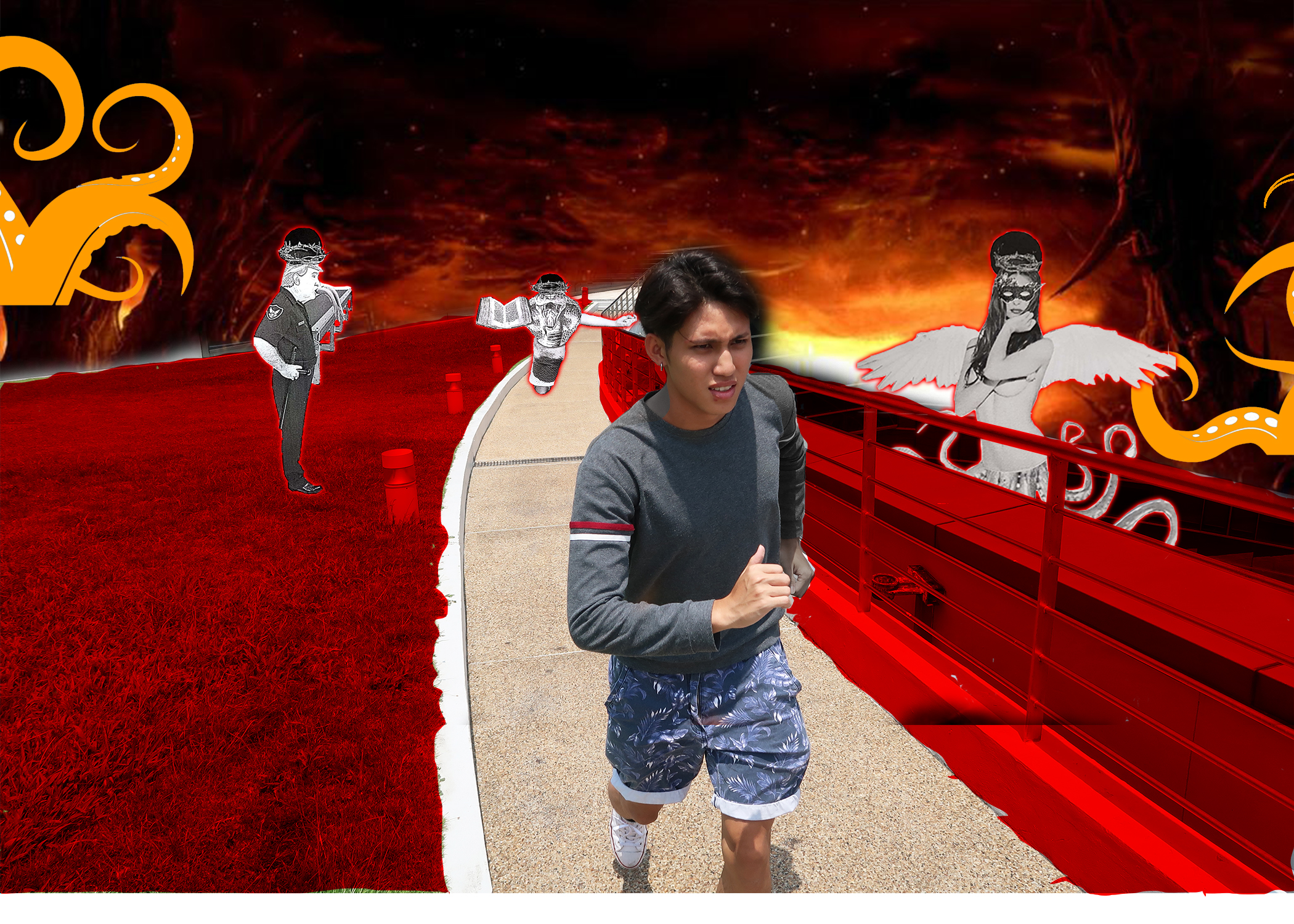 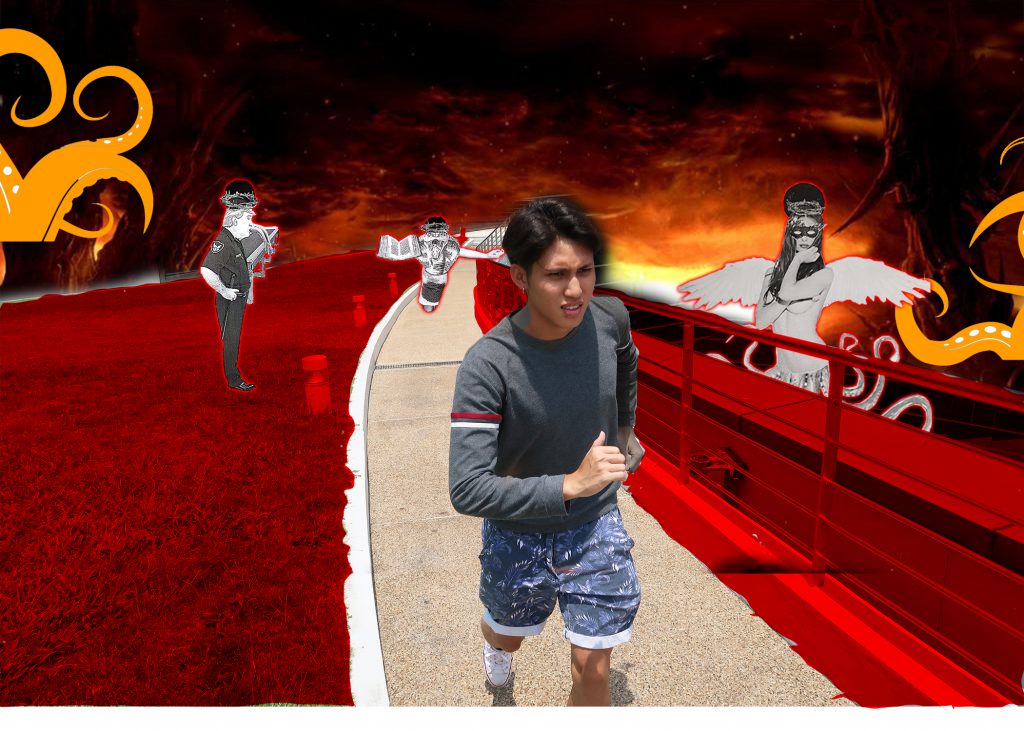 The 3 characters are chasing me in my hellish dream world, where it can be seen that the three characters are
slowly getting nearer and nearer to me, and I am slowly fading with grey shadows as they approach me.