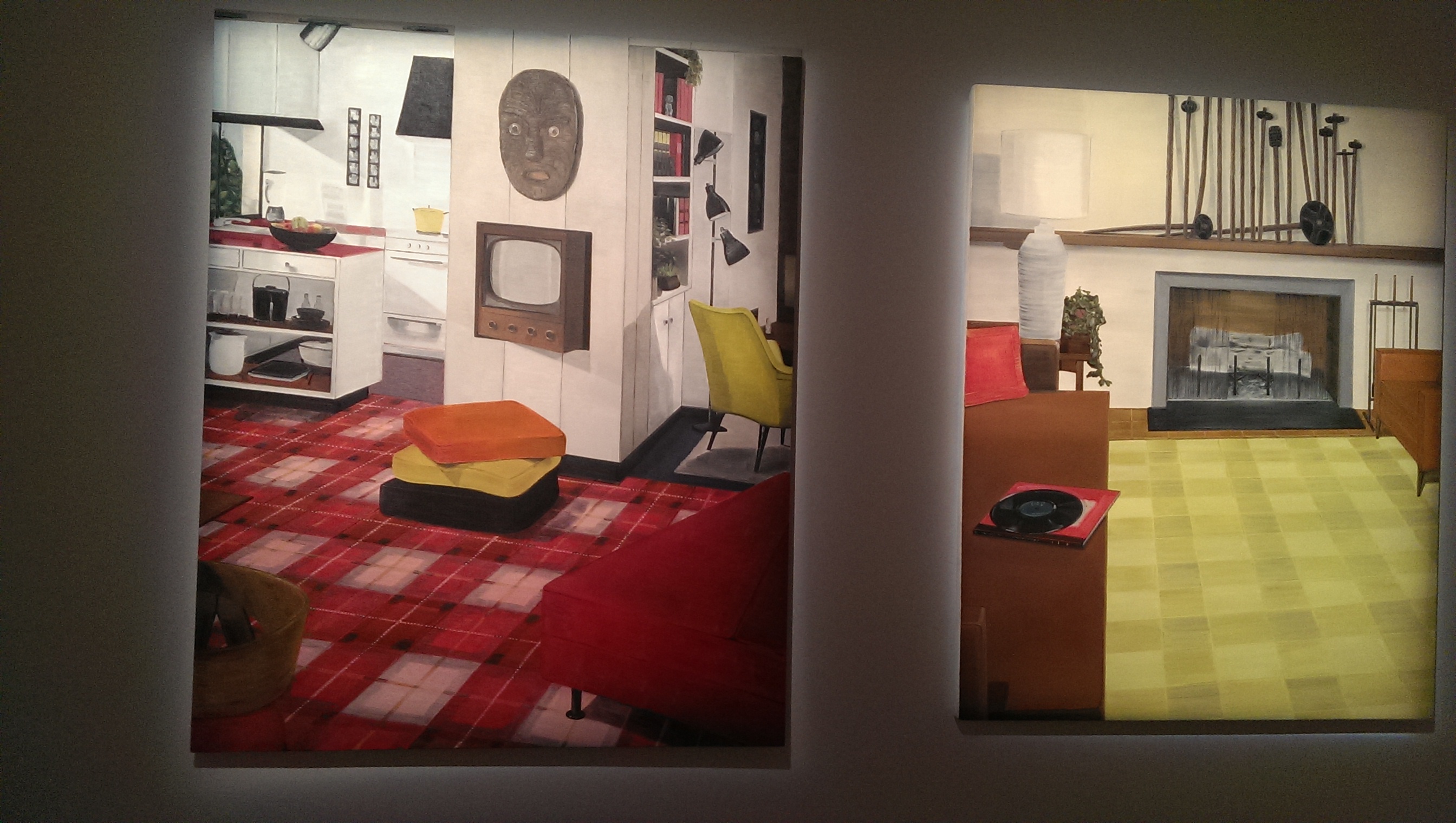 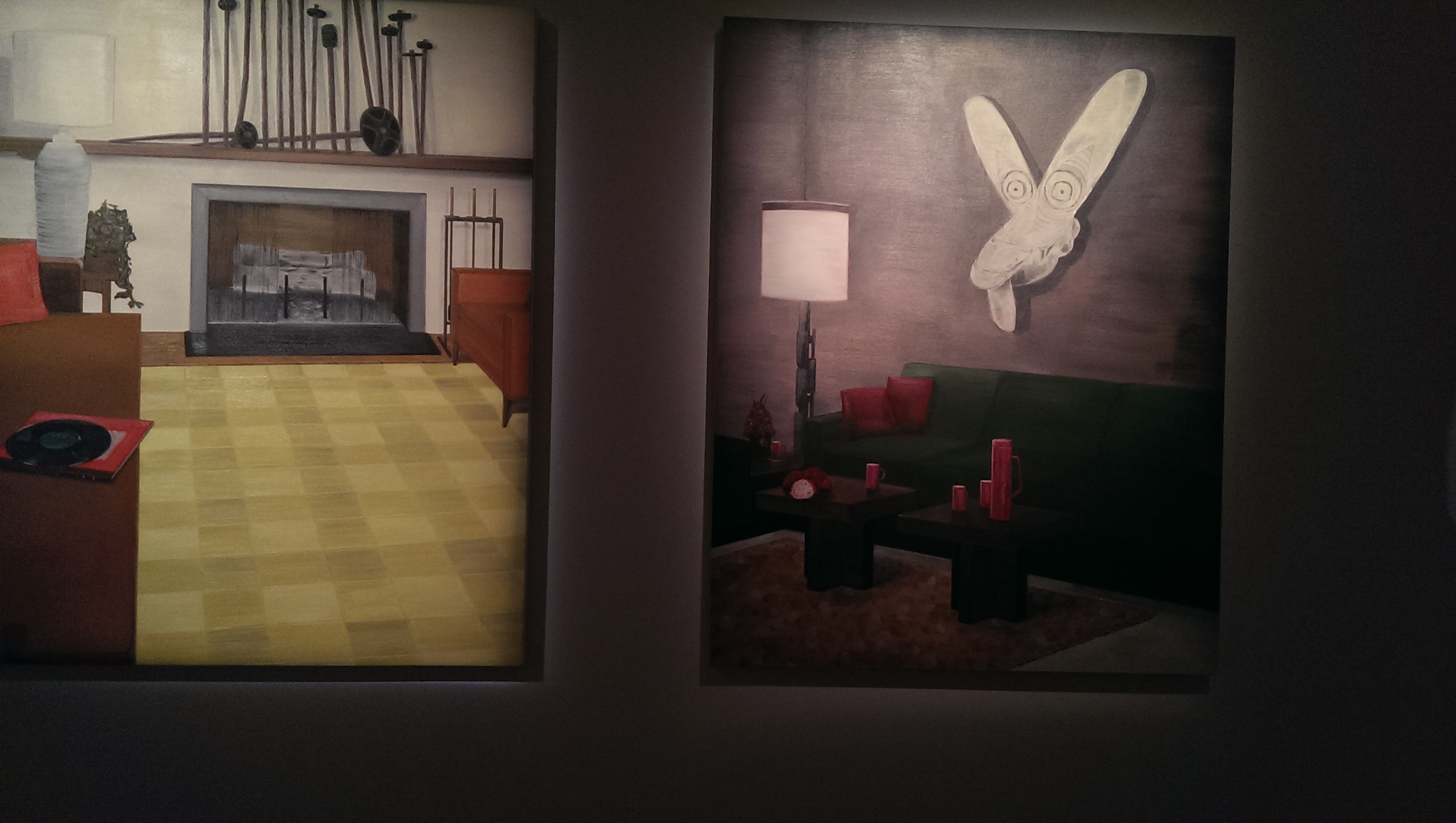 All artworks from this series “Lounge Room Tribailant” are labelled “Untitled”. This series was created by the New Zealand painter and sculptor, Graham Fletcher, in 2010. It served to create a space where one can “consider realities and the effects of colonialism… and how many indigenous artists are [influenced] in the advent of globalism“.

Done entirely in Oil on canvas in a sizeable scale of around 150 x 120 cm to 162 x 130 cm, this series emanates an authoritative atmosphere that once held the “Power of the Old World“, a strange contrast to the lack of authority within the image itself. This authoritative atmosphere is also represented in the chic modernist choice in furniture, where “ownership” has become no longer a privilege for the minority of elites, but aestheticized as “objects of the New“. In other words, the privilege of owning expensive objects has now become so common that it loses its authenticity, its worth, and thus its authority. Similarly, the tribal mask which metaphorized indigenous tribes is now perceived as a simple decorative object (to any person on the globe) rather than a meaningful cultural entity (associated with one group).

Although the artwork is largely successful in manipulating the audience’s emotions towards the work, it is difficult to sieve the commentary on how artistic visions are being globalized from the work alone. Perhaps it is a link that we have to establish ourselves, when thinking about the stripping of cultural identity in the advent of consumer globalism.

My initial read on diminishing importance of culture was quite accurate, although I was very surprised to learn he had applied the earthly colours with “chisel-edged brushes”, as the painting was rather flat. Perhaps this could be THE statement he wishes to make about artists following global culture – to achieve Leonardo Da Vinci’s remarkably thin-layered oil paintings. As for communication challenges of the work . . . I believe he could have made the tribal elements more obvious. Tous les memes, it might not be what he was trying to pull off. 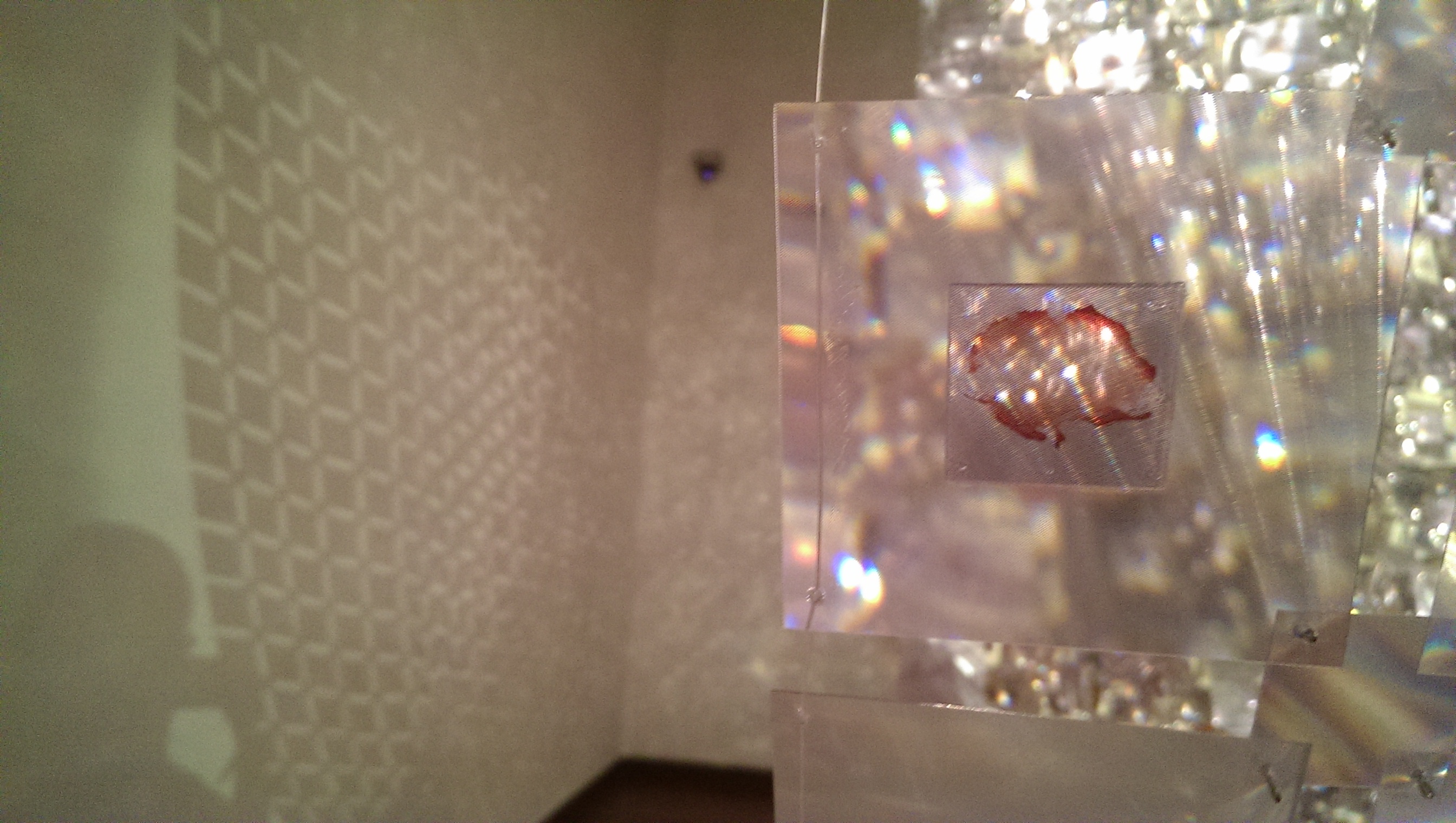 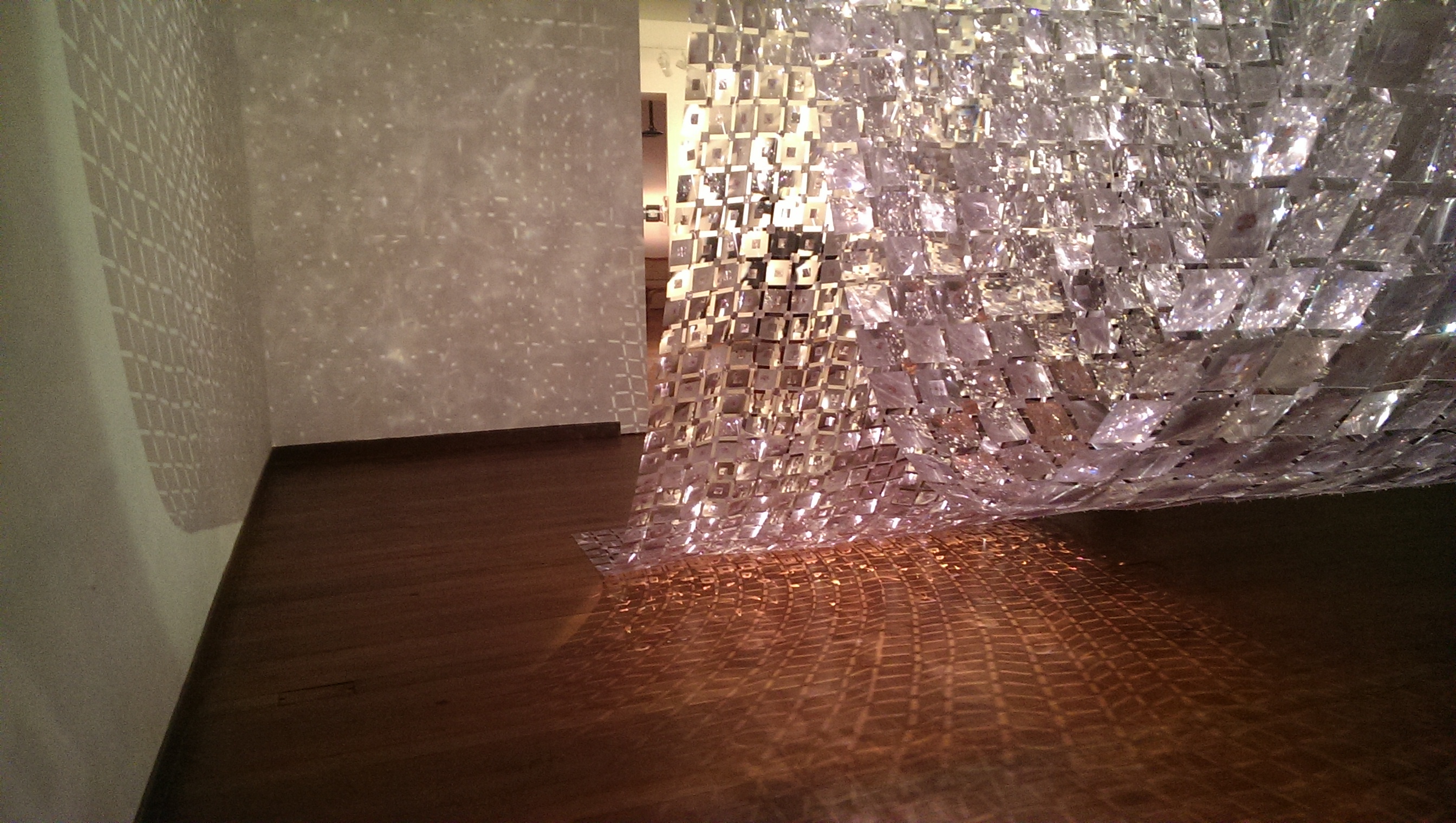 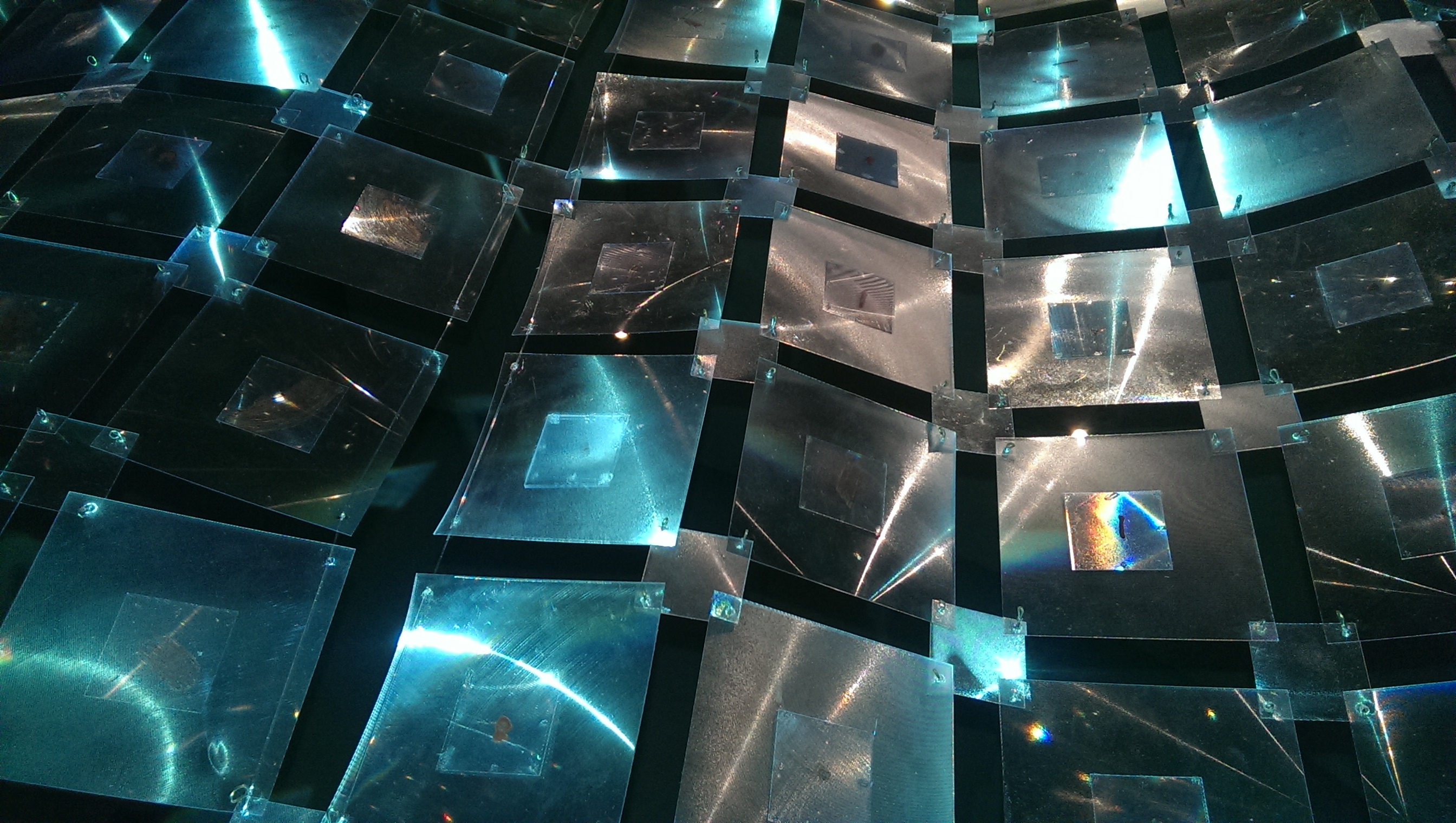 The stunning massive weave of plastic lenses (about 4m in height!) was initially thought to be a regular elegant artpiece that sought to dazzle and impress. But there was more to that. Upon closer look, I discovered a smear of blood on the centerpiece of each sparkly “fresnel lens” ( a tool Victor first experimented with in 1997). Mixed emotions of disgust and awe set in, invoking memories of peering through the microscope and hateful medical procedures like injections and blood tests. What did this chained curtain (notice the change of vocabulary) of blood mean, and whom did these blood sacrifices come from?

I believed it was “unity” I first saw in this piece (what more to think of multiple plastic slips held together by pins?), but it came apart when I realised the piece comprised of blood “sacrifices”. This emotion, which may or may not be the intention of the artist, pried open my concept of successful teamwork  or simply, happy relationships between people. There must be sacrifice for the bigger picture (e.g. happiness within a body of people) in order to achieve something smooth, beautiful and perfect like the weave. Naturally, upon closer inspection of each relationship, pain must have been involved in each sacrifice, but each sacrifice was essential for the weave to be complete.

The text provided a contextual clue to whom the blood belonged to: people from all walks of life. The armed forces, medicinal community, civil defence, the arts, the pioneer generation – strangers to the artist. And guess what? I was quite right about the sacrifice! Only, it wasn’t exactly for “unity” but rather, “peace”. Well, it comes hand-in-hand, at least. Note that the donors are mainly people who have had to be on the front-line of hardship of , or are going to be, or are being. I took an extra long turn to marvel over the droplets of blood after affirming the good intentions of the artist (you know how some artists go for gore and cruelty and sin). I noted how some people were more generous with their “blood sacrifices” than others. Hahaha.