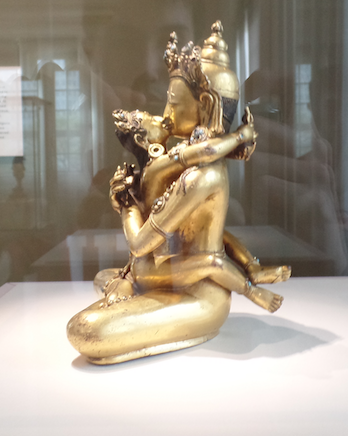 This artwork aims to make known a form of Esoteric Buddhism also known as Tantric/Vajrayana Buddhism. The yab-yum bronze icons of Tantric Buddhism often strike the layman as hedonistic celebrations of eroticism but are in fact meditational devices a Tantric worshipper uses.

Due to the influence of sexual stereotypes and sexually suggestive content portrayed in mass media today, viewers of this artwork may misinterpret the work and miss the religious aspect of the artwork.

We feel the need to educate non-practitioners of the religion of its actual meaning as the imagery is often misunderstood and sexualized. The union of a male and female in the yab-yum position aims to convey non-duality, but when taken too literally, it conveys the exact opposite. The distortion of meaning has made it important to search for ways to represent this idea more accurately and less misleadingly.
We have designed a motion graphics poster to be projected along the common walkway of our school. The visually striking image of the yab-yum sees to attract students to take a closer look, where flaps are placed over the censored parts of the image. These flaps will explain the nature of the image and fix the misinterpretation.