[Next Level] Show and Tell

Last Thursday was my first time using Facebook Live. It was an exhilarating experience as the whole class was tasked to record 15 solid minutes of live video around the school. It  basically felt like a “show and tell” session done simultaneously. I thought it was an excellent way to start off the first class as I got to see the personalities and the way my friends approached the task differently.

I am the glitch. To be honest, my first attempt at a Facebook Live video was unable to be posted as there was no option to post my Live video to Facebook as shown below. There were only options to save the video or click “Done”. As such, my first video disappeared into the vast expanse of internet, never to be seen again. 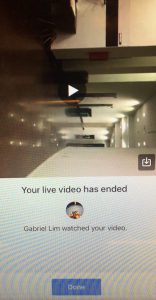 After another attempt, updating my Facebook app, my phone iOS and then fiddling alot with the app, my Facebook Live video was finally posted… Still couldn’t get it to work on landscape mode but I still count this as progress…

I found the reactions to the Live Videos really interesting. My mama says don’t do it, there are bad people lurking around on the internet…

But also, my aunt from the Philippines watched my video and friends from everywhere were able to view this so it was really fun to interact with them. Overall, I really enjoyed this activity and love the idea of super participating in social broadcasting.