After reading the article on restoring Davis’s Collaborative Sentence, I gained a better appreciation of Davis’s work. My thoughts are that technology changes so quickly and frequently (Yes, you Apple and your constant iOS updates), that works can be easily obsolete. Just like how the Mona Lisa in the Louvre needs constant maintenance (there’s technology involved in this too), Digital art needs to be conserved to continue to be accessible. The Struggle. And the struggle of coding, I can relate to some extent… And WOAh, Korean texts were unable to be converted into readable code. This could possibly be considered GLITCH art.

I would like to think the process of restoring and conserving this work is part of the artwork itself. It evolves and is constantly being added to.

Which leads me to my next point

What makes super-participation different from participation? Apart from the eradication of time-space barriers and the super speed, there is also the idea of MANY to MANY communication. This is evident in what Davis says.

The huge difference between broadcast TV and the Web is the keyboard. With that people can say anything; they have full expressive capacity. This means a more intense and personal link could occur between me and the audience. So why not get the whole world together to write a sentence?[1]

Davis created such a platform which truly encourages super participation and its unpredictable and chaotic nature. Super participation is a channel for intimacy through communication networks, this is evident in the behaviour of people in virtual space.

People around the world are so different in the way they communicate that some parts of the collaborative sentence stand out more than others through Font size, Language, Hyperlinks and Punctuation other than the Period. These were the clues that sort of indicated that a part of the sentence was contributed by another user but even so, it is still a mystery as to who starts and ends a sentence. 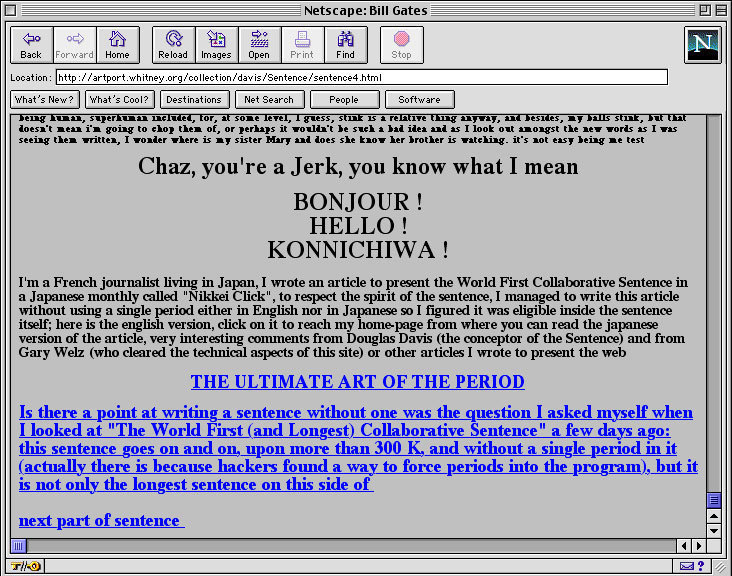 To be a part of the sentence, click here

One comment on “Research Critique: The World’s First Collaborative Sentence”