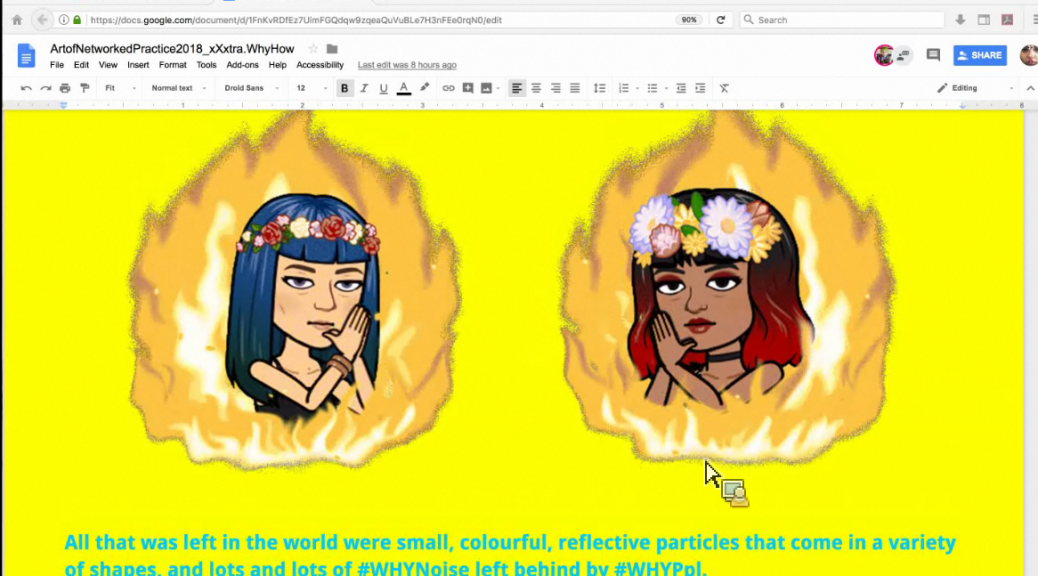 The three day symposium, titled ‘Art Of The Networked Practice’, involves critique and analysis of keynotes, live performances, and global roundtable discussions, all broadcasted live on Adobe Connect. They involve various performers and artists who collaborate together to create art. For this hyper essay, I will write about day 2(Keynote by Matt Adams, co-founder of Blast Theory) and day 3(Internet Performance by Jon Cates and collaborators). This essay will be about how projects involving Social Broadcasting has pushed further the boundaries of  normal broadcasting.

Social Broadcasting has now allowed for greater things, rather than just conveying knowledge. Social Broadcasting need not be merely a stream of texts or images being shared with  other people. Games can now run on the platform of social broadcasting. These games need the platform of social broadcast to work.  Take for example ‘Uncle Roy All Around'(2003), a game where both online and offline players are needed to play. It takes the form on the streets. Street players are given a handheld monitor to communicate with the system and the online player. Both online and offline players can play together to search for ‘Uncle Roy’, and online players can chat with street players to tell them where to go. 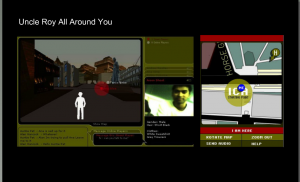 The game is set on the assumption that street players will co-operate with the online players, and follow instructions from the device. Online players have the advantage of scanning the whole area, and can tell the street players of their finding. The ability to gain more information than the street player suggests how powerful being online is, but at the same time they need the street player to physically find ‘Uncle Roy’. Both street and online players must lay hand in hand to complete the game, suggesting how social broadcasting has become very accessible to everyone that it can be manipulated in any situation and at any place.

Social Broadcasting has also revolutionised to the point that the lines between virtual and reality are obscured. The quality and procedure of how a broadcast takes place can affect how it is perceived. For example, ‘Kidnap’ is a performance-social experiment whereby 2 random people were ‘kidnapped’ and secretly brought to an office upstairs of ICA. 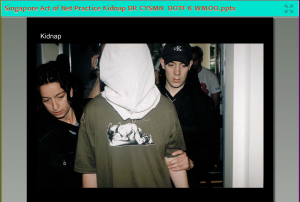 The location was not disclosed to the public, but the room was broadcasted live so everyone could see the ‘kidnapped victims’. The irony of keeping the location a secret and yet broadcasting the victims itself almost shows the whole performance as a document of the the whole kidnap. The whole process becomes almost real, acting out a power relationship, with one dominant(the kidnapper/media) and submissive role(kidnapped victims). In an interview with one of the kidnapped victim, Debra, she mentioned that “once {they} put a bag on your head it all becomes very real, it’s not a laughing matter anymore.” Though its only pretending, the line between reality and acting is blurred. Also, the fact that they did not announce whether it was a performance, for profit, or a social experiment at the beginning might have made the whole project very open to interpretations. It might have seemed real to some people. Another example would be Roberto Sifuentes‘s #exsanguination. The whole performance involved collaborator Aram Han Sifuentes cleansing his ‘bleeding’ body with leeches. 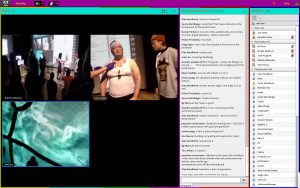 During the whole process, viewers are encouraged to move closer toward the performers, invading their private space. We, the viewers, are also given the opportunity to see Roberto Sifuente being made up. Despite seeing the process behind the performance, the whole work was documentary-like and real. It has a sci-fi quality, as if the audience are part of a crowd in the healing procedure. This blurs the line between reality and performance. The viewers are allowed to step into the performance space, giving the illusion of something real is happening in front of their eyes.

Social Broadcast has also revolutionised the way we carry ourselves, especially through technology. With technology we can now expand what we share and how we share it. For example, the performance ‘XXXtraPrincess’, the whole performance was done in snapchat filters and the performer’s bitmojis. 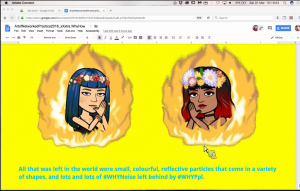 The performer’s faces, Janet Lin’s and Paula Pinho Martins Nacif’s,  are partly blocked by their phones, with snapchat filters covering their faces. The whole performance was presented in bitmojis and filters, showing how social media is now being presented in everyday life, even in social broadcasting. Presenting the performance as a snapchat theme makes the whole project more interesting, as the lines between reality and technology is now blurred and combined to make art. All while they were reading off a script from their phones, Arcángel Constantini‘s screen shows him drawing as the camera follows every stroke. This gives the illusion of the audience being the artist himself, as we get to see what he sees when he draws. Arcángel Constantini draws for the whole of the performances, streaming live drawings on petri dishes. 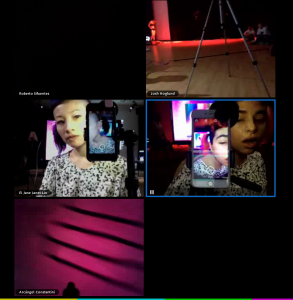 Nearing the end, Janet Lin and Paula Pinho Martins Nacif often change their snapchat filters. This suggests how easy it is for one to change their identity and appearance on the internet. It also portrays the fluidity and naturalness of social broadcasting, when they move forward to manually change their snapchat filters. There was another camera broadcasting them together, showing both performers with their backs against each other. The whole experience was very uncut and raw, both for the performers and the audience. Overall, the performance suggested how social broadcasting has allowed us different ways and methods to create a new experience for individuals and groups.

One thought on “Social Broadcasting is amazing: gLobAL SyMp0siUm”