1st part of this post is on colour, brain, vision research through talks, books and video. 2nd part which is on my idea – identification of problem and aim of the project. 3rd part is a list of reference motion works and artists.

Linked the talk with Professor Gerrit Maus (Division of Psychology in NTU, HSS) to Art and Visual Perception: A Psychology of the Creative Eye (New Version) by Rudolf Arnheim, Published by University of California Press, 1974 as I’ve realised that some of the contents overlapped with one another. (The book covers findings on visual process from a psychological point of view) Furthermore, the book is an additional source of justification of conversation we had.

Human see colour not only with eyes but with the brain as movement of the eyes is “reported to the sensory motor center of the brain” (Page 379). The feedback that the brain received from the motor influences visual perception of which this perception does not “operate with the mechanical faithfulness of a camera which records everything impartially” (Page 43). Therefore, the brain does not measure colours but it perceives based on given information from the eyes. This phenomenal also known as Kinaesthetic Perception.

Colour constancy happens when “colour receptors adapt their responses selectively when one particular colour dominates the visual field” (Page 334). An instance would be when one “confronted with a green light, the eyes decreases their response to greenness” (Page 334). The Rubik’s-cube illusion is an example that reflects this phenomenal where the brown square at the top and the yellow square at the side are the same colour.

Another topic covered in the book is perceptual shape of which it is the “outcome of an interplay between the physical object, medium of light and the conditions prevailing in the nervous system of the viewer”. In this context, how we see shapes do not only depend on the retinal projection but “the totality of visual experience we have had with that object, during our lifetime” (Page 47). The visual appearance “owes its existence to brightness and colour” as the eyes distinguish the areas between brightness and colour to determine the shape of the objects. However with distance, it weakens how shape is being seen as “perceptual mechanism is left free to impose upon it the simplest possible shape” and “when the actual stimulus had disappeared, the remaining memory trace weakens” (Page 63). The eyes figure shapes with its overall pattern as this visual perception relates to what gestalt psychology calls as visual perception.

To further iterate, a video on Prof Semir Zaki’s (Neuroesthetics) lecture’s on Colour, Vision, Reality and Illusion provided some insights to this topic. Some of the points noted are:

1.There’s no colour in the world outside. It is generated by the brain from which it does not follow the strict rules of Physics (Wavelength of light) and Biological (Ratio Mechanism).

2.Colour is a subjective experience and is an act of judgement.

3.There are no colours but constant colour.

4.There are no hues but inconstant ones. Hue is a subcategory of colour of which its appearance depends strictly on the surroundings.

Additionally, chanced upon BBC Future website that covered illusions and perception of which further emphasised on the above informations and the last paragraph at the bottom of the page struck me. “Our visual system remains too limited to tackle all of the information our eyes take in”, as our brain is not big enough to store all of it, thus our brain is selective towards the interpretation of what we see. In this context, “seeing, then, is certainly not always believing”. Personally, I’ve always believe that seeing is believing. Therefore, this quote was an interesting take and provides another kind of perspective as to how we see things around us in our daily lives.

An example that reminded on the shift of perspective is Monument Valley, a game that enables player to explore,interact and unfold optical illusion architectures from different angles to go to the next level of the game. This somehow has the essence of M.C. Escher’s Impossible Constructions collection.

People assume things based on what they see most of the time. Little do they know that their “senses can be easily fooled” as Aristotle said (Ambiguous Illusions by Humberto Machado, 2015) because “seeing means grasping some outstanding features of objects” (Art and Visual Perception, Page 43) and with visual perception, seeing becomes something that isn’t always believing as how we see is based on how our minds perceives it.

When assumption is made, it usually connotes to negative effects such as disappointments, miscommunications and even derivation towards wrong conclusions. Thus, the project aims to create awareness of own consciousness of seeings through colour illusion (lean towards colour interaction/constancy) as colour is often taken for granted as it is presented to us from birth. Colour plays an important and powerful role in the world we live in as it has the ability to change how people observe, think, feel and react.

Therefore, I want my work to be an experience that allow viewers to see without the need to interpret or have prior knowledge about it. After all, it’s about the consciousness on the sense of seeing.

An illusion that reflects the result of how our eyes see colours. It guides viewers into seeing how their brain perceives colours as same colour illuminance evokes different perception of brightness through colour interaction. This demonstrates the idea of seeing isn’t always believing.

A graphic designer that works on optical illusions inspired from artist such as M.C. Escher as he produces GIFs everyday. One of his works caught my attention for its dimensional and perspective movement of a cube and its surface colours.

9 Squares – Collaborative work with 9 designers to create 9 squares of 3 seconds abstract GIFs with the use of only 4 colours. 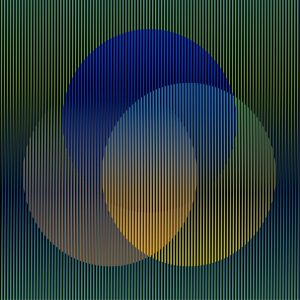 A kinetic-optic artist and modernist master whose works are based on the four chromatic conditions – Additive, Subtractive, Inductive and Reflected colour (Focuses more on colour than movement). He explores the sensory possibilities of colour in space and its interaction with the viewers as they become participants of his works.

The investigation based on radiation of colour where 2 colours produces a 3rd colour as the colour plane interacts with one another. 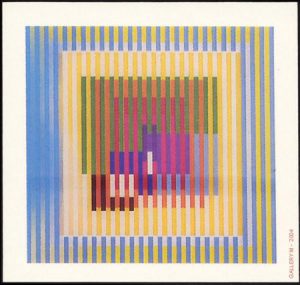 A well known kinetic artist (studied under Johannes Itten) that works on various media such as drawings and sculptures of which all explores on the idea of movement, colour and perception in non-static forms. 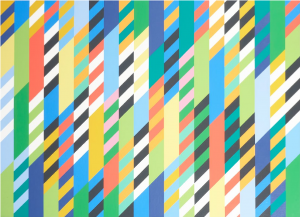 A well known Op Art artist whom was influenced by Futurism’s abstract thinking, explores the optical juxtaposition of colours.