Micro-Project 3 was probably one of the most challenging one yet but definitely the one where I had the most fun.

For this project, we were required to create a final piece that was a collaborative effort. We all had to work towards a common goal to produce ONE final art piece.

Lei introduced this concept to us by making us do a quick class activity. This was a surrealism game called, Exquisite Corpse. In a group of 4, we folded a piece of A4 paper into 4 sections. Each person had to draw according to the word/description given by Lei. This part of the drawing was to be continued by the next person who was not allowed to take a peek at the previous drawing. This continued on and we all got to see the final piece as we unfolded the drawing and see how our drawings connected to each other. In this case, we each get to draw a part of figure (person/creature/etc) which combined to form the following. 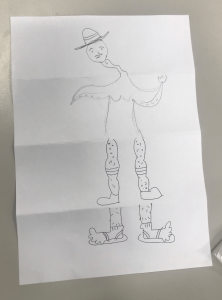 Afterwards, the Micro-Project 3 was introduced. The idea behind this project was to use a streaming platform that could connect the 4 for us in a group together, to produce content in a third space via Instagram video chat. We all had to be in different locations and we had to produce a final piece that would have a sense of continuity amongst the 4 of us!

Before we decided on an idea, we attempted to match up our faces to see what we could work with. However, we failed miserably as seen from the photo below.

Hence, we used a different approach and planned things beforehand.  Our main objective as a group was to have a dance choreography, singing a simple song that we all knew a.k.a. the Alphabet Song. We did not coordinate our dances but we did coordinate certain movements as it moves along one video to another to create an impact and to attempt to create a shape.

There were so many challenges that we faced. We all separated to different locations and ended up communicating via the video chat. This was especially challenging as firstly, communication was an issue. The timings as to when we spoke led to it being messy as we didn’t know which person was talking to who. There were times where we just gathered in person to discuss which wasn’t ideal given the nature of this project.

Another challenge we faced was coordinating the steps with each other. The positioning of our hands had to be in the right directions to form the shapes we wanted to create through the screen. This was especially difficult to coordinate given the fact that at times, the signal could be interfered and someone would end the call. Due to that, the positioning of each person on screen, would change. After several tries, we figured out that that could be solved by the timing in which each one of us picks up the call. Hence, we did that and coordinated the moves again.

We attempted a total of 4 times before we got the final video. Even so, we couldn’t get the audio to work. We did check to see if turned on the audio while recording the screen but it didn’t work. Hence, what we had to do was to recreate the audio separate from the video and edited it into the final piece.

All in all, although it was the most challenging micro-project we’ve done, I felt that this was the most fun I had. Creating content with other members and listening to everyone’s creative input was helpful to create the final piece. It was also interesting to see how each of us interpreted things.

That being said, to answer some questions,

I felt that Micro-Project 1 was the one where I had the most creative control. This was because everything was entirely based on my own creative direction, my point of view, my curation of filters to use, etc. That’s when I felt that I had the most creative freedom. Micro-Project 3 was the one where I felt I had the least creative control given that we all had to work towards a common goal but had to do things together and work cooperatively. Sure, we could all chip in to give input, but ultimately, we all had to agree and come to a compromise which I feel limits one’s creative exploration.

This is tricky given that all the projects resulted into a final piece that involved a collaborative effort.

Micro-Project 1 illustrates the concept of Open Source as the hashtag, collectively, as an outsider, it provides a more holistic insight into the life of an ADM student. It was a collective effort from differing opinions and views. Therefore, I felt like viewers are able to take what they may and interpret things accordingly which essentially highlights the strength of Open Source. I see Open Source as an inspirational outlet where people come to share their common knowledge.

Micro-Project 3 illustrates DIWO best because it involved the thorough and active participation of all the members to work towards a roughly planned common goal. As the name suggests, I think that the concept of Do-It-With-Others involves people working towards the same objective and building on each other’s ideas.

Categories: Micro-Project 3 - Together Split, My Work