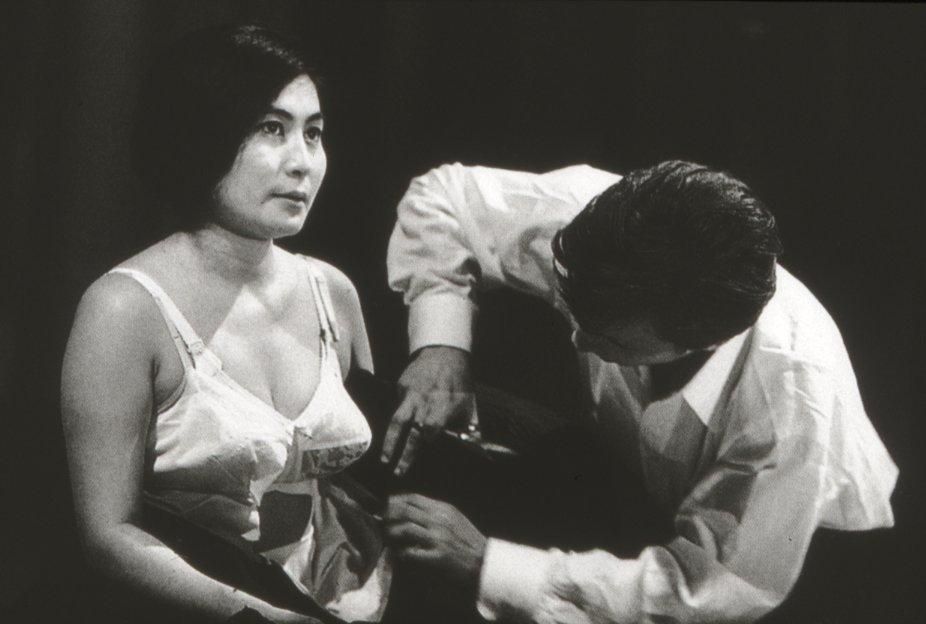 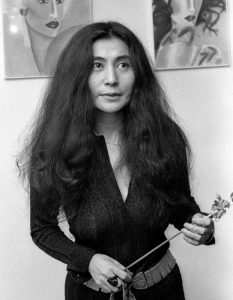 Diving into one of her most famous pieces, the Yoko Ono’s Cut Piece have been staged five times. This remained a key piece in the Fluxus* Art Movement. This piece first debuted in Kyoto, Japan,  in 1964 at the Yamaichi Concert Hall.

Yoko Ono provided no context to the performance except providing an outline of the instructions which was to have the audience to cut a piece of her clothing, one by one, in which they could take the pieces they cut, home. 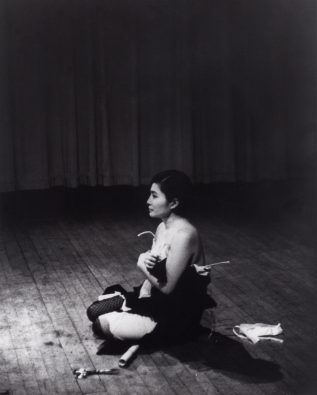 The question that will be addressed here is:

How does it alter the way an artist or designer create the work, when there is an interactive component?

First and foremost, having an interactive component, as one may know, will bring about a lasting impact on the participants. This is because, as shared in class, memories are connected to the emotions. It brings about a neurocognitive change. Every experience is unique. There is no possible recreation of the exact experience. Therefore, the experience of one audience member may vary and differ from the next audience member.

In this case, Yoko’s piece may or may not influence the audience members in choosing an area to cut or how much to cut. The actions of the others may influence the ones that come after to participate in the performance. The reason for this is that every audience member may very well cut a piece of Yoko’s clothing on their own terms, according to what they feel is appropriate or what they would like, etc. However, there are others who may be influenced by the actions of the rest that came before them. This highly depends on individuals.

Therefore, the way the artist create the work with an interactive component may involve the manipulation of resources to play to the advantage of the piece. This means to say that if the artist have a specific message that they may want to portray, their piece can be altered in such a way that it could sway the audiences to prove the artist’s standpoint. However, this also depends on the participants because in a way, everything else could be controlled but the audience is taken to be a variability.

This is very much visible in Yoko’s Cut Piece where in the beginning, the participants were hesitant and cut small pieces of her shirt or skirt. As the performance goes on, they became more daring and start cutting up bigger pieces. There were some participants who cut off the front of her undergarment and straps. Highly likely, this happened because people drew inspiration or seek approval of others during the performance. When they witness someone cutting up a bigger piece or a more risque piece of clothing, that is seen as approval or as the ‘okay’ to test waters and experiment further. In my opinion, this also is dependent on the personalities and values of the individuals on whether to experiment, follow or stay in the safe zone.

Hence, in order to create an interactive art that is effective, impactful and provide a long-lasting memory, this involves a proper understanding of human behaviour and psychology. Observational skills will come in handy! In comparison to creating a still art piece, an interactive art piece needs to be able to grasp the attention span of the audience when it is in motion/action.

*Fluxus was an international, interdisciplinary community of artists, composers, designers and poets during the 1960s and 1970s who engaged in experimental art performances which emphasized the artistic process over the finished product.