I realised that there is a lack of Asian female images. Also, since found images are a reflection of our visual culture, the found images of women are often also idealised or objectified.  This reminded me of the Chinese women on cigarette posters back in the 1880’s to 1930’s and I decided to use the aesthetics from that time as my look for this project. 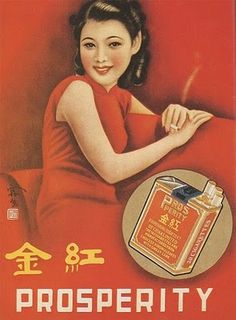 Example of a Cigarette Poster

I mainly appropriated the head of the ladies in the posters. Some of the earlier drafts of my works were like this: 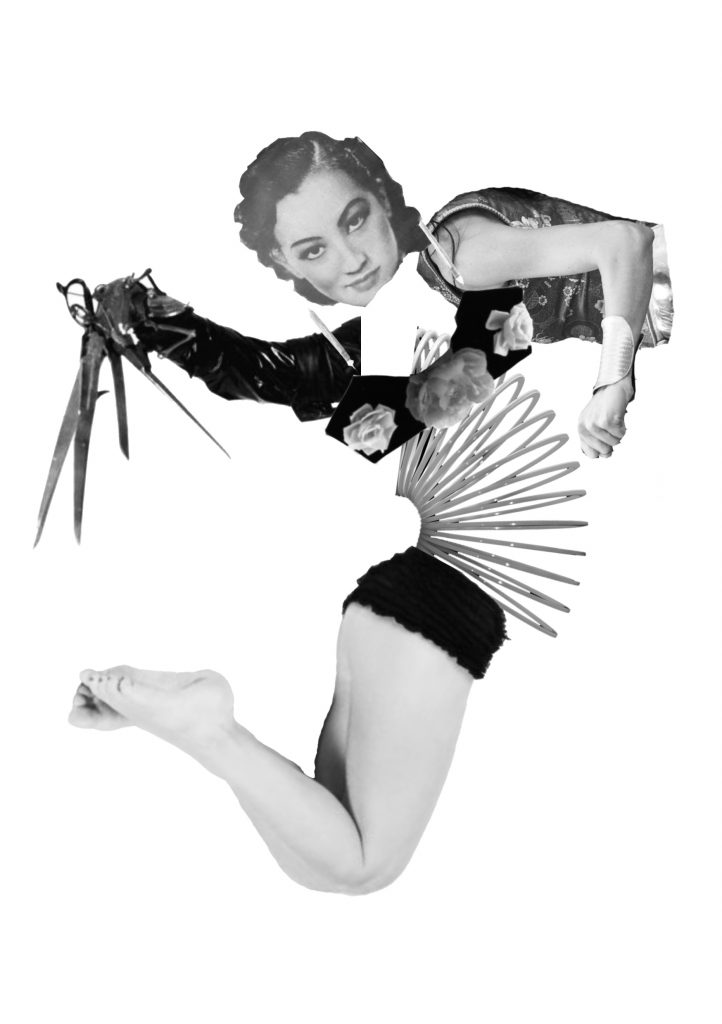 I wanted to try making the work black and white, however I realised that that removed the style of the work. Also, it subdued the cigarette posters aesthetics that I was hoping to achieve. 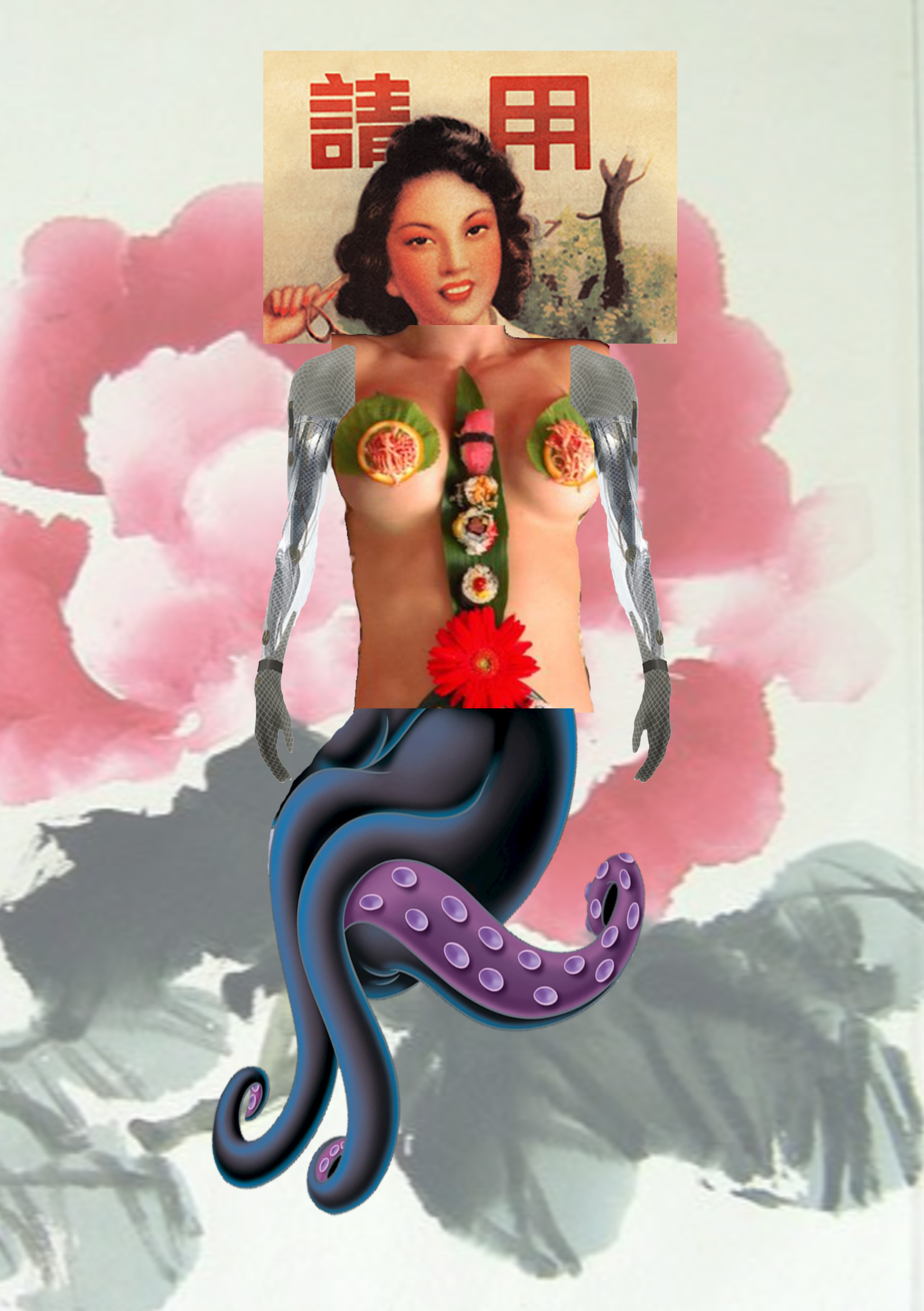 In this draft, I add a background to help to make the three figures appear more coherent. Also, I realised here that since we are conflating many different elements into a unified form, there needs to be more harmony between the different elements. Over here, the tentacles of Ursula is much cooler than the other earthy and more sepia colours used, thus it looks less assimilated with the rest of the figure. 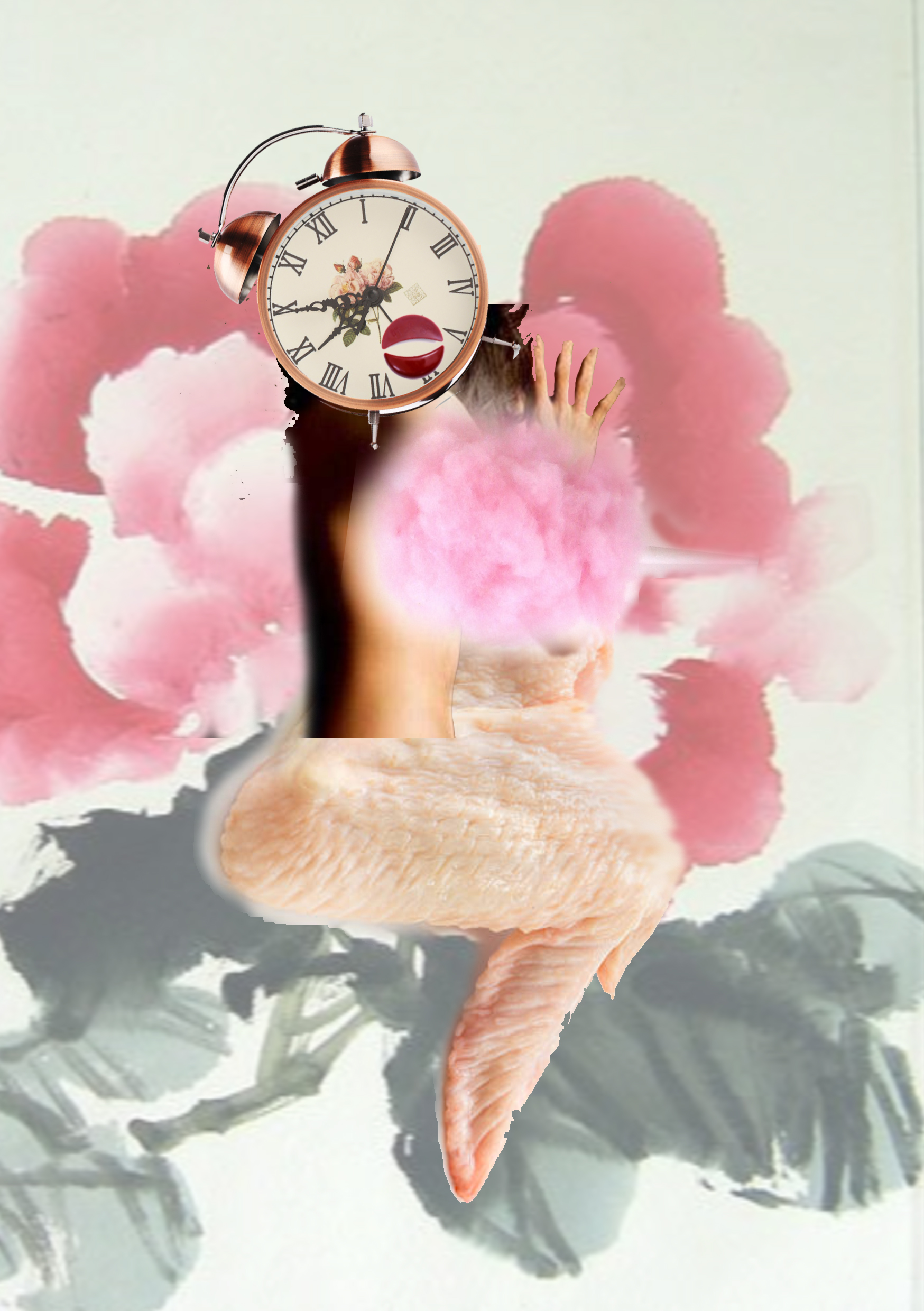 I decided against using a clock face to represent this figure’s face as it deviated from the other two figures. I wanted my figures to be different but still recognisable as a group of three.

These are my final works. 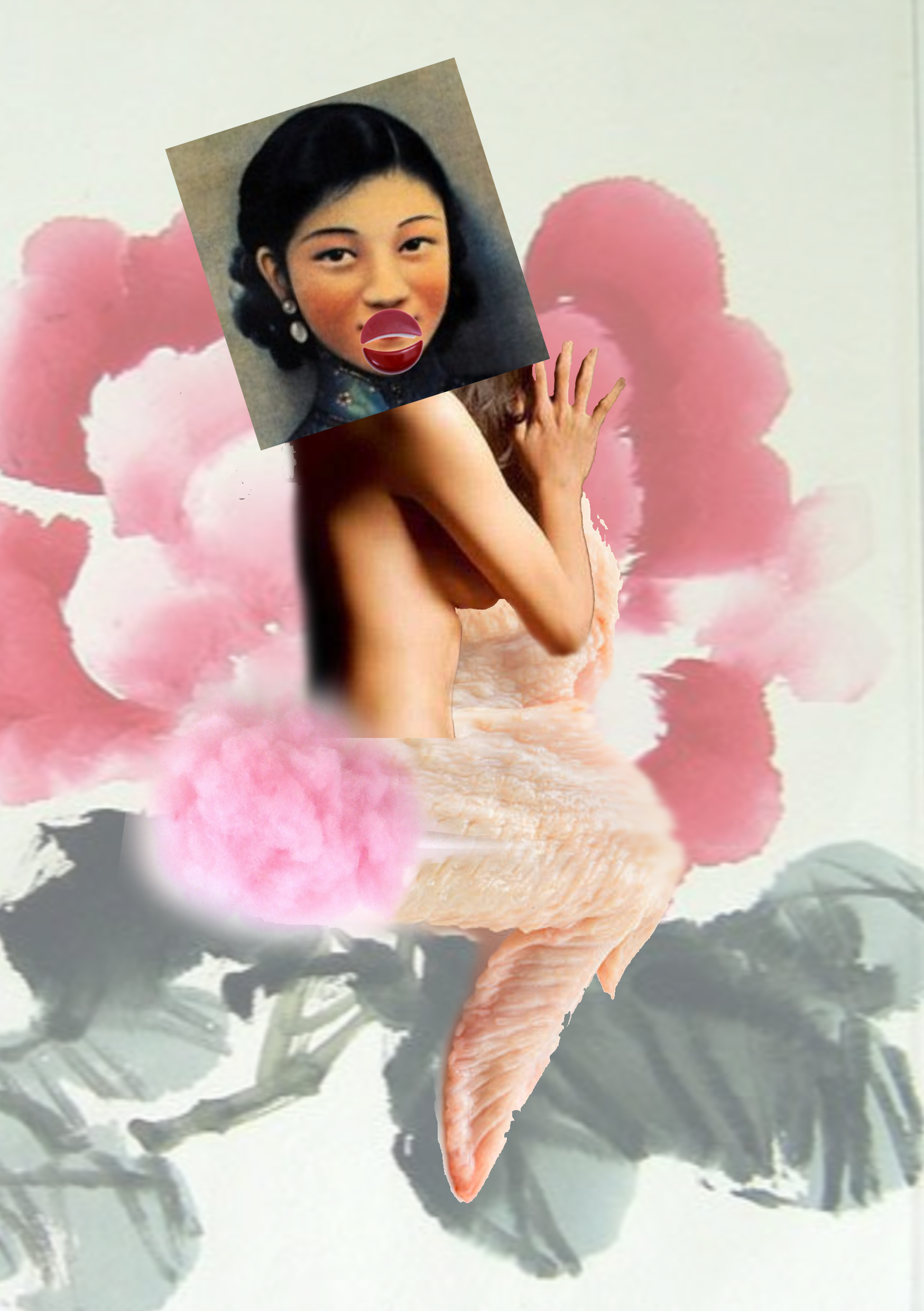 Over here, the viewer is denied the usual gratification of seeing the bossom and legs of a female. Instead, I replaced the bossom with a candy floss, suggesting the usual idea of innocence and school-girl naivety many females are portrayed with (or expected to emulate). The use of cotton candy subverts those ideas as the symbol of innocence is now used to obscure the bossom, often a target of sexual fantasy for some viewers. Meanwhile, the use of a raw chicken wing to replace the leg pokes fun at how the female body is often consumed in popular culture and also calls out the use of female sexuality to sell food products.

The lips of the figure is made by a “jiao bei” which are chips used in a Chinese divination ritual. Traditionally these chips will determine if a divination lot is true or not, leaving the woman’s fate to luck and denying her anatomy. However as this chips are now the figure’s lips, 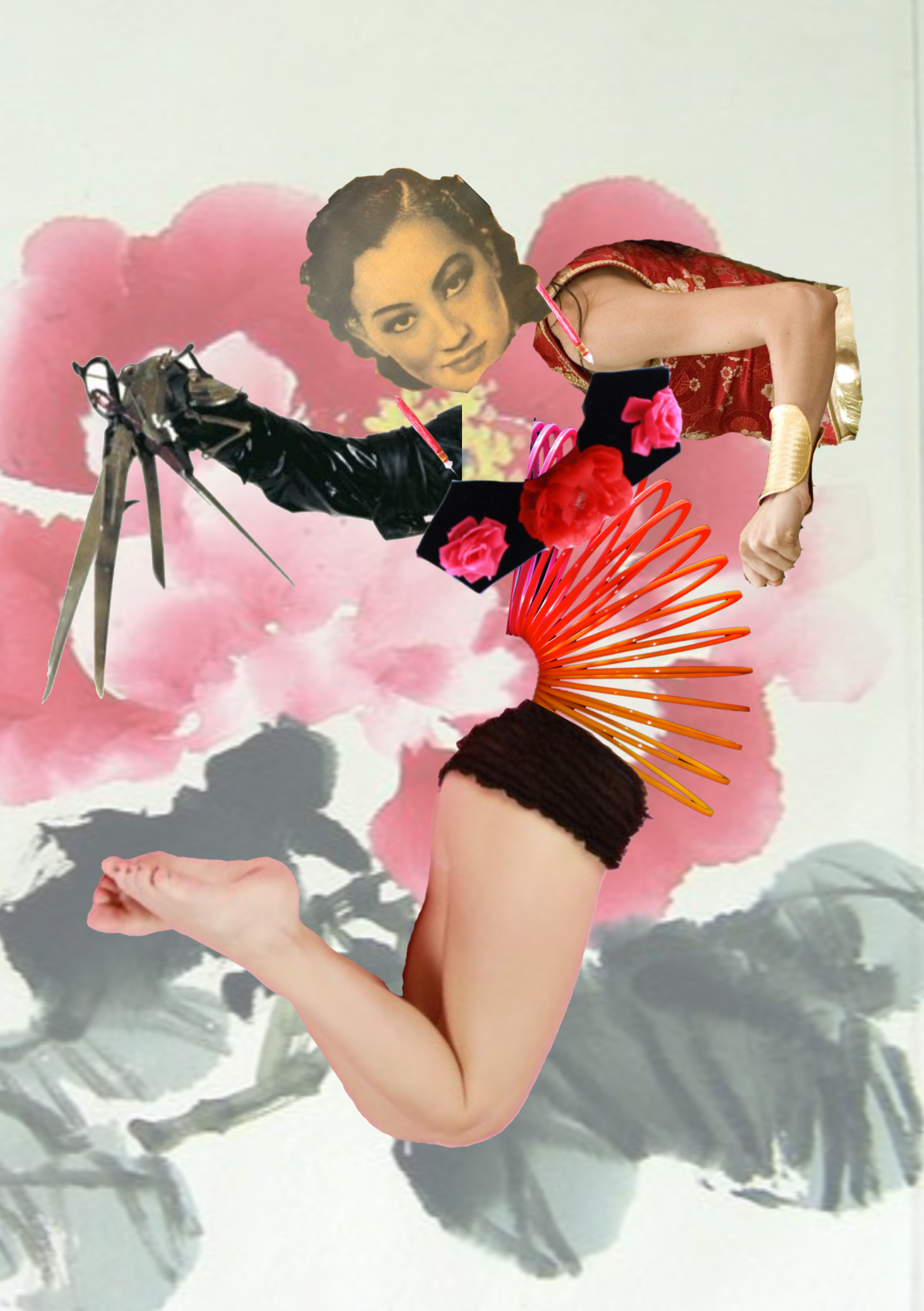 This figure is a woman who is physically empowered. She has the hands of Edward Scissorhands and Maggie Q. Thus she is at once able to keep others away and also defend herself. Her slinky waist also gives her flexibility to stretch and bend around. Funnily enough, her legs actually come from a pinup model while the Maggie Q arm is actually appropriated from a character that is more “oriental” than representative of a demographic group in Asian. Thus the elements are again subverted as they have been transformed as images for consumption or fun and novelty into ways the figure can protect and defend herself. 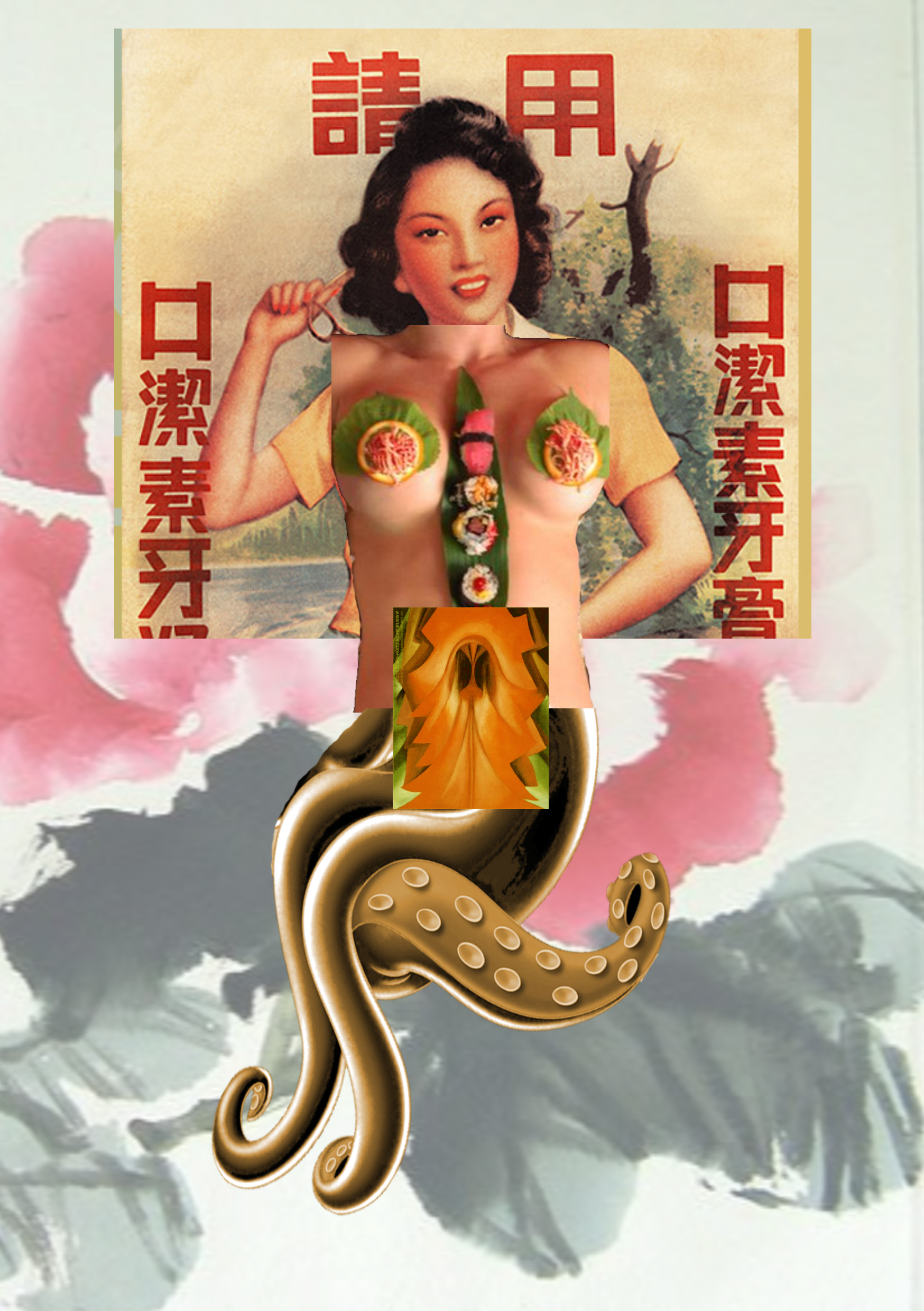 This figure is interesting as it encompasses a female both at one of the most compromising state she can be in and also a female villain. I used a painting of the clitoria flower by Georgia O’keeffe to allude the female genitalia. I purposely edited the painting to make it look more eerie, increasing the tension between the reds and greens to make it look unsettling. Thus, even those the figure has “exposed” her intimate area, she is still untouchable.

The body of the figure is taken from a Nyotaimori, a naked sushi human platter. This is a practice in Japan that is extremely condescending towards women. It is then juxtaposed with the legs of female villain, Ursula. I choose this to show that while a female might be put into a situation where she is disadvantaged  and denied an equal playing field, she still has her ways and potential to fight against it.

All in all, the project was really fun and I enjoyed the thought process and freedom to explore with this brief.

Teach me how to buy time. View all posts by Shu-ying