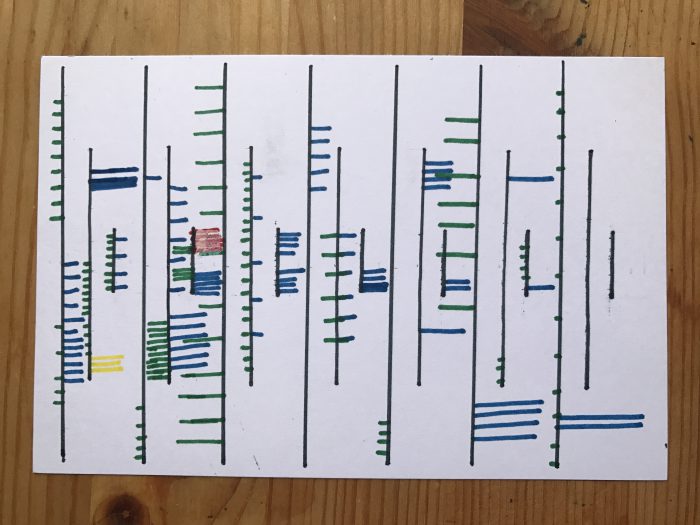 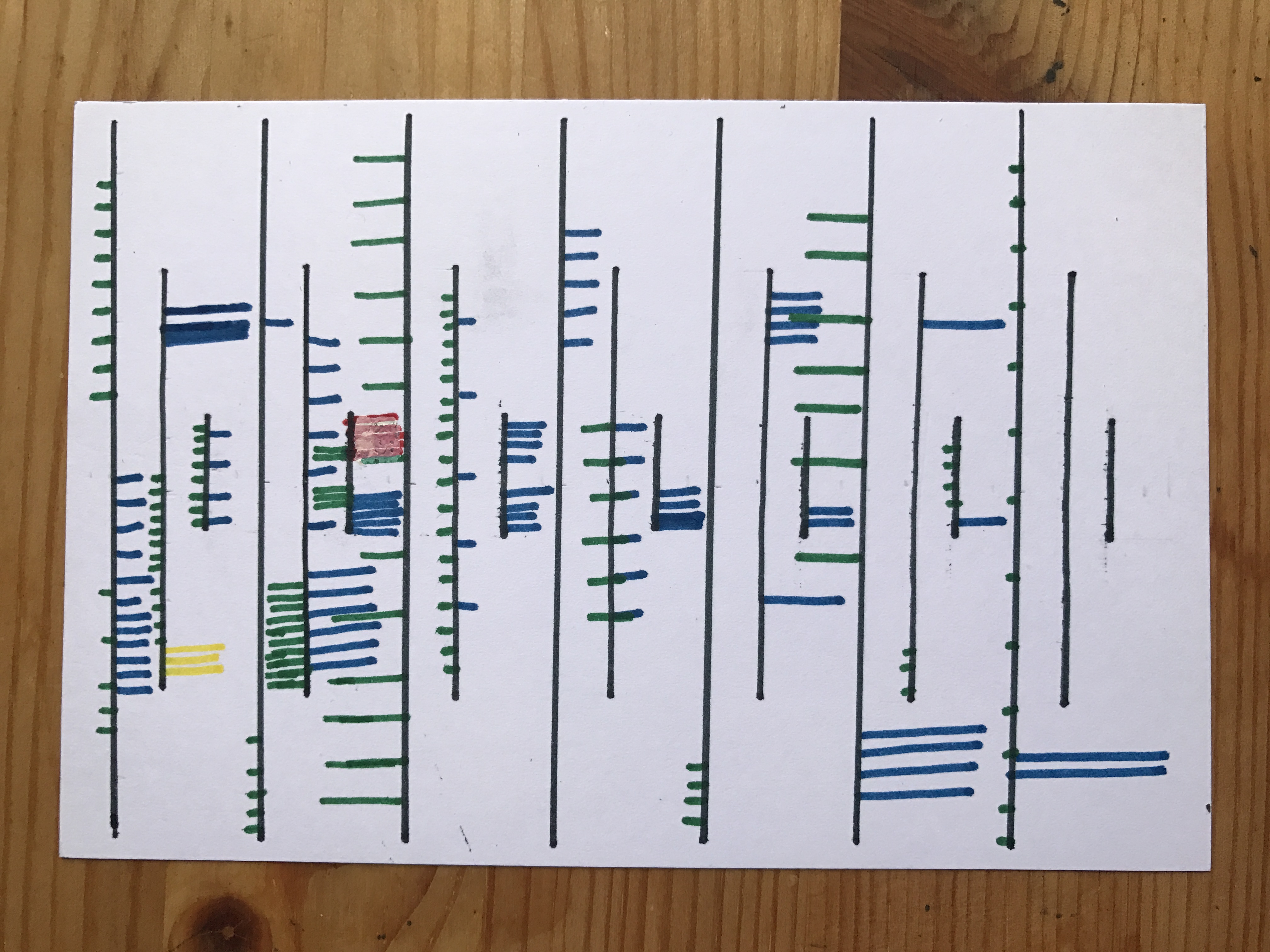 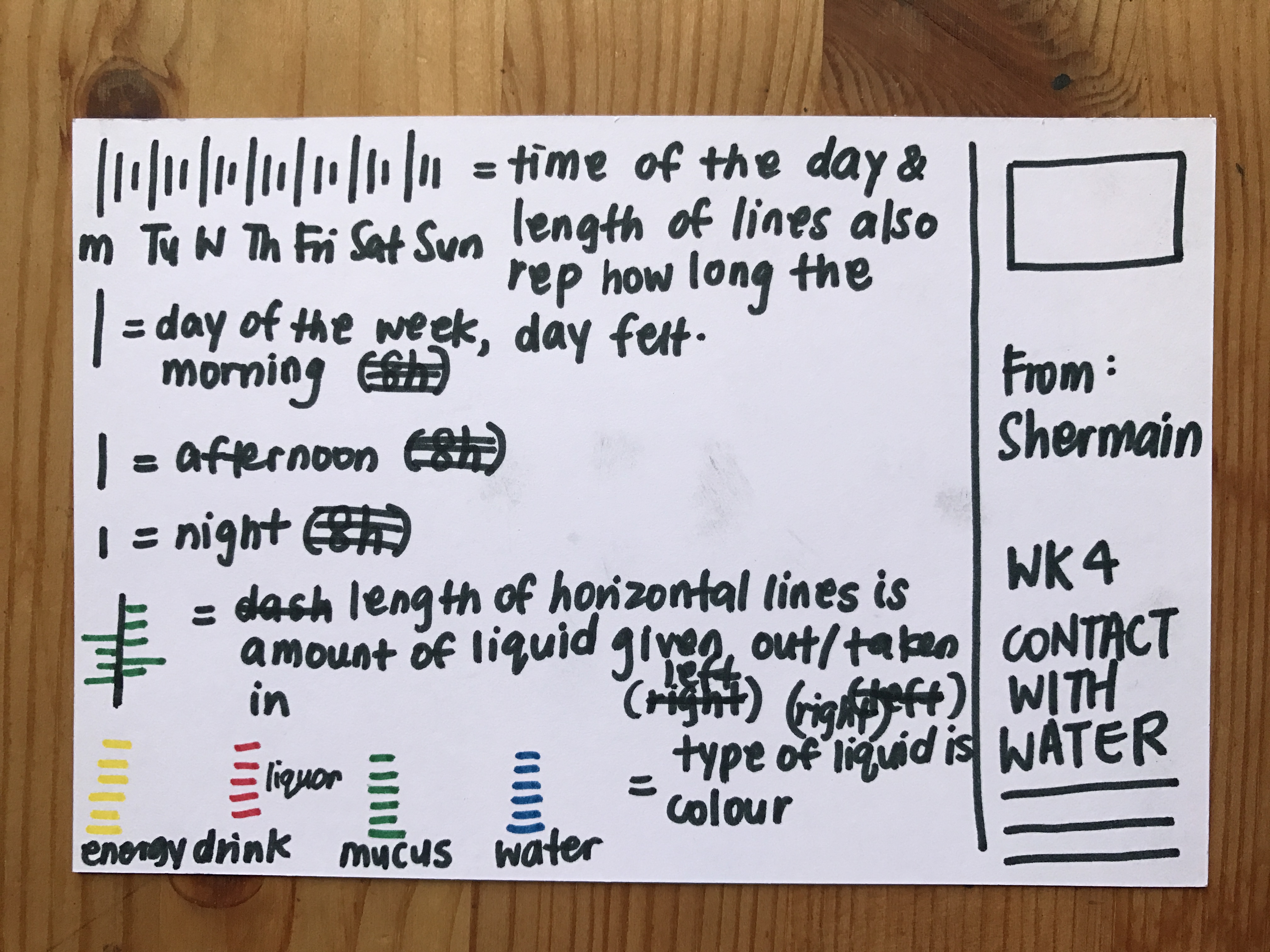 Honestly, I was really excited to visualise my contact with liquids because I’ve been sick for the entire week. Which means that I’ve been taking in and giving out loads of unattractive, gross amounts of liquids.

This visualisation did not turn out as clear as i would have liked to. But here’s how to read it: The three lengths of times represents the three different times of the day. Namely, the longest being morning, middle being afternoon and shortest being night. Because these were how my days felt when i was ill. The horizontal lines in different colours represents the type of liquids and its length represents the amount of liquid I was in contact with. Also, the direction of the horizontal line tells if the liquid was given out(left) and taken in(right). The closeness of each horizontal line also tells of how often I come in contact with the liquid.

An interesting pattern that I noticed was that, after consuming large amounts of water, the amount of mucus i was giving out was much, much lesser which proves that water is indeed really necessary for a sick soul! But in comparison, when I consumed 2 pints of beer on day 2, I definitely felt for its effects and paid for it because on day 3, I was blowing out humongous amounts of mucus.

I never knew info visualisation could be so funny and musing heh. 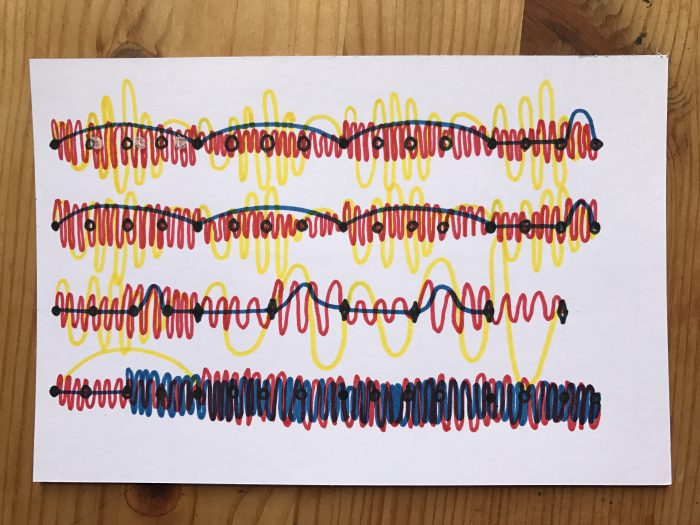 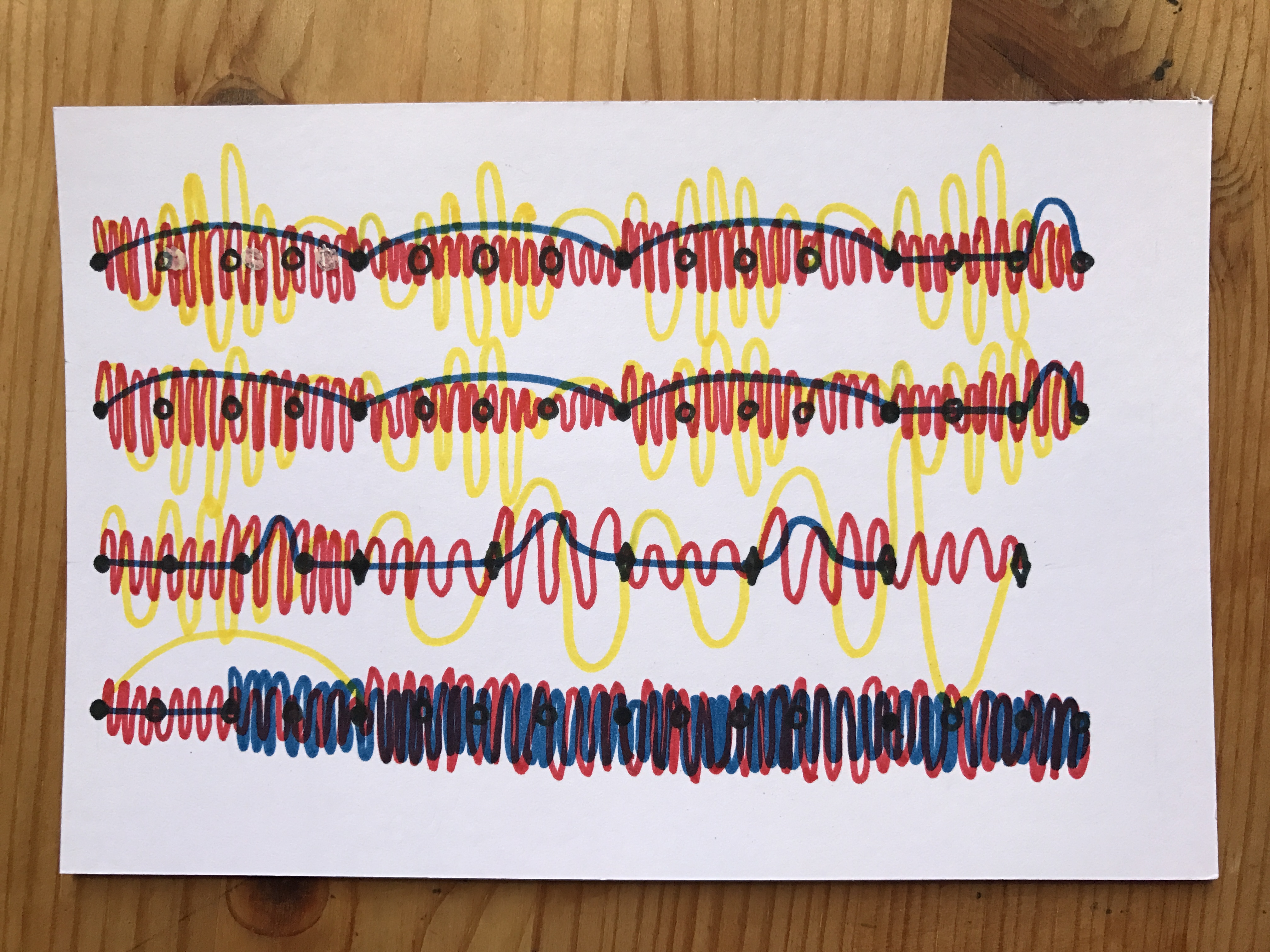 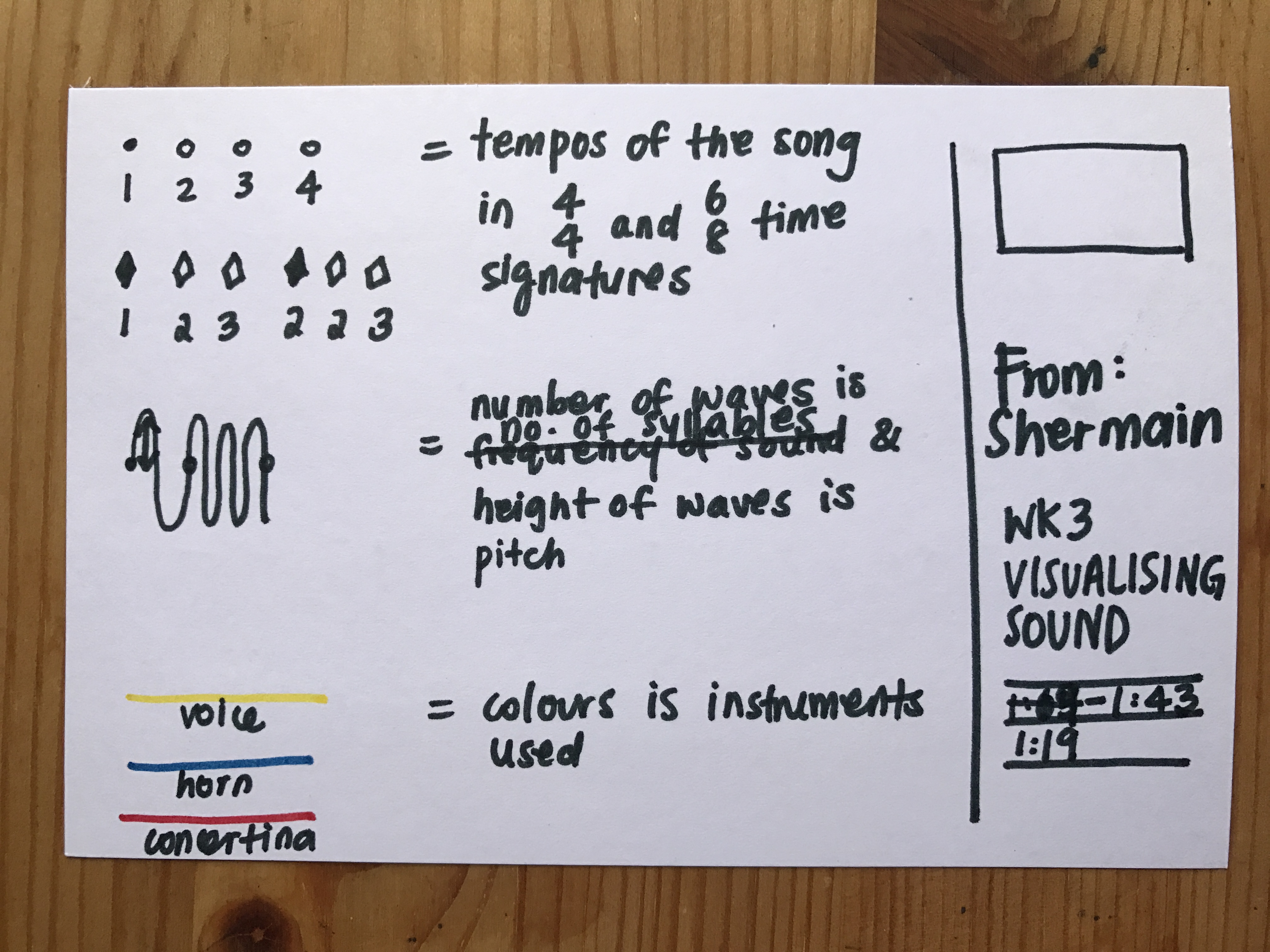 Visualising sound was particularly a challenge because there were already many indicators and measurements that were available in the field of sound and music.  Out of sheer fun, here is the list of possible measurements i put together:

In the end, I let my body decide which part of the song appealed to me the most and focused on 1:05 – 1:43 + aaah! What stood out to me was the three ‘voices’ and the kinds of ‘dynamics’ that they brought to my ears. I chose the three final elements to be tempo, pitch and the type of instruments. The information can be read like a book, from left to right and up to down.

What surprised me in the end was how the visualisation turned out to be more complex in the end. Despite only choosing three elements to consider, the visual outcome turned out more emotive, animated and fun than i expected 🙂 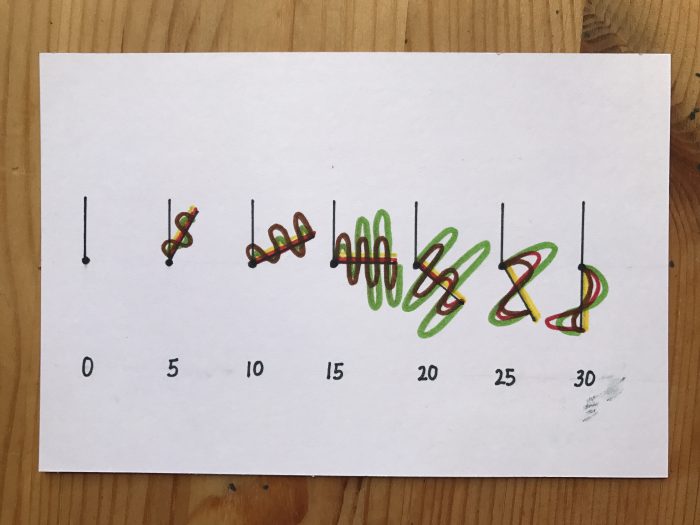 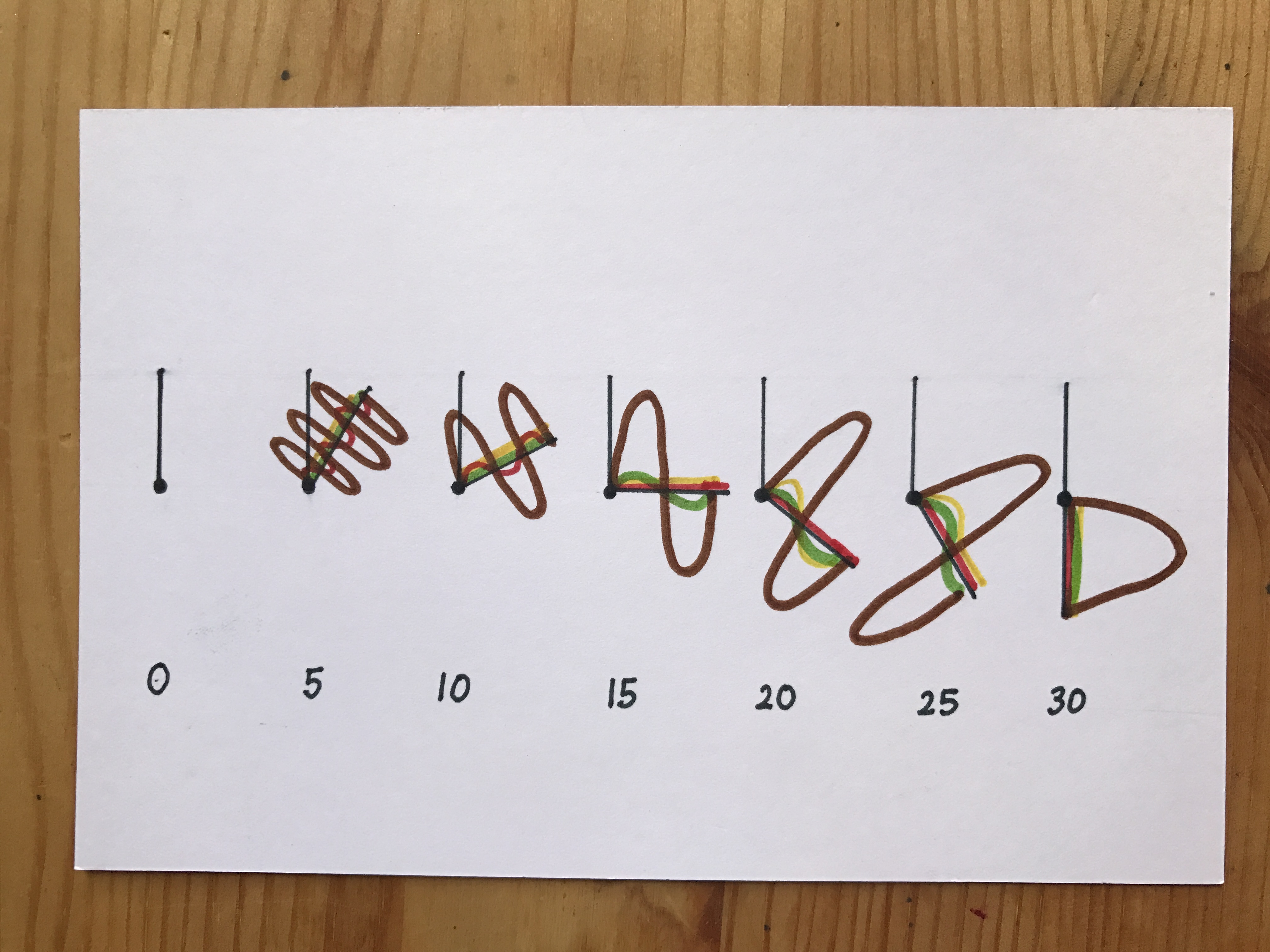 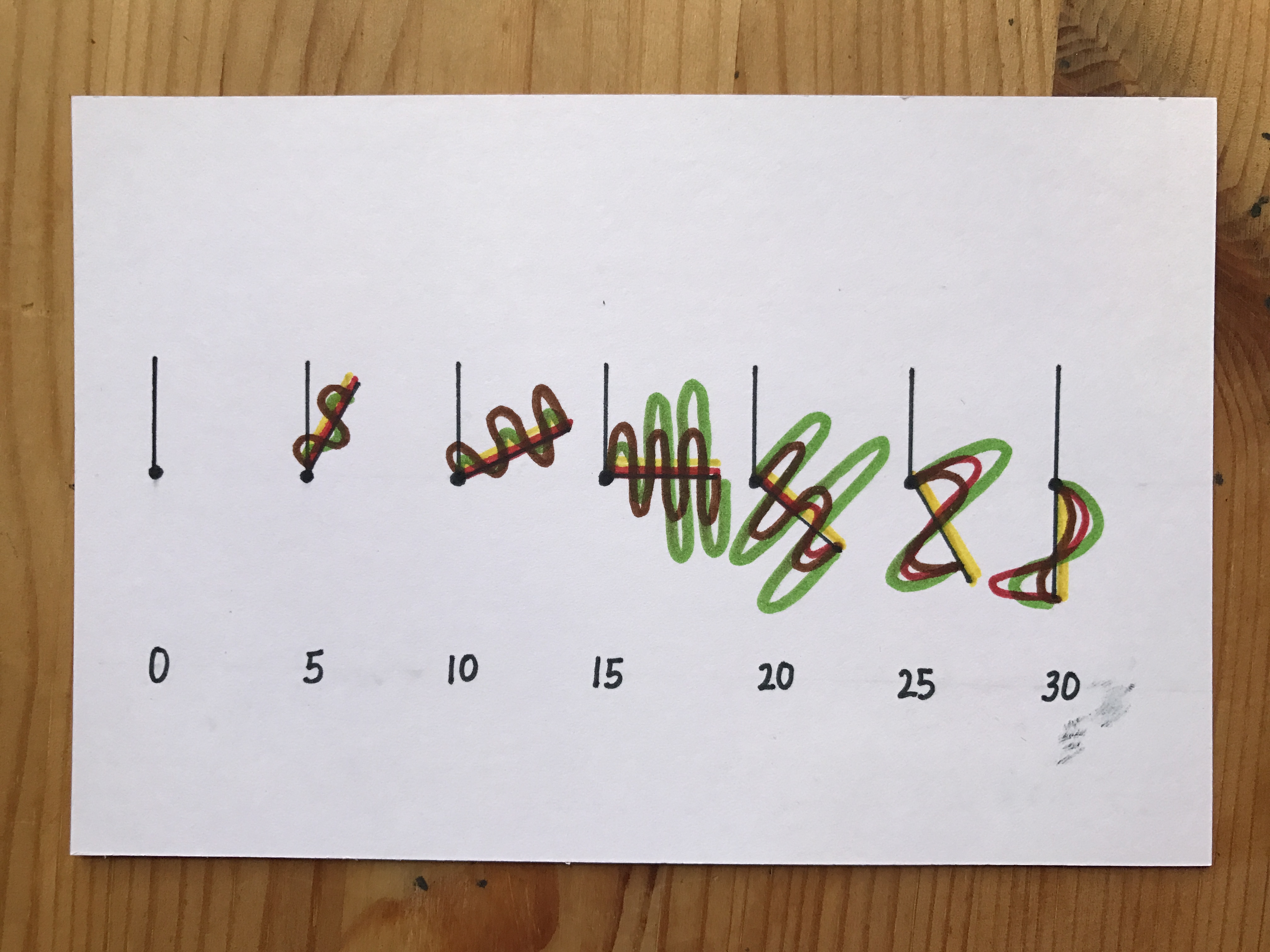 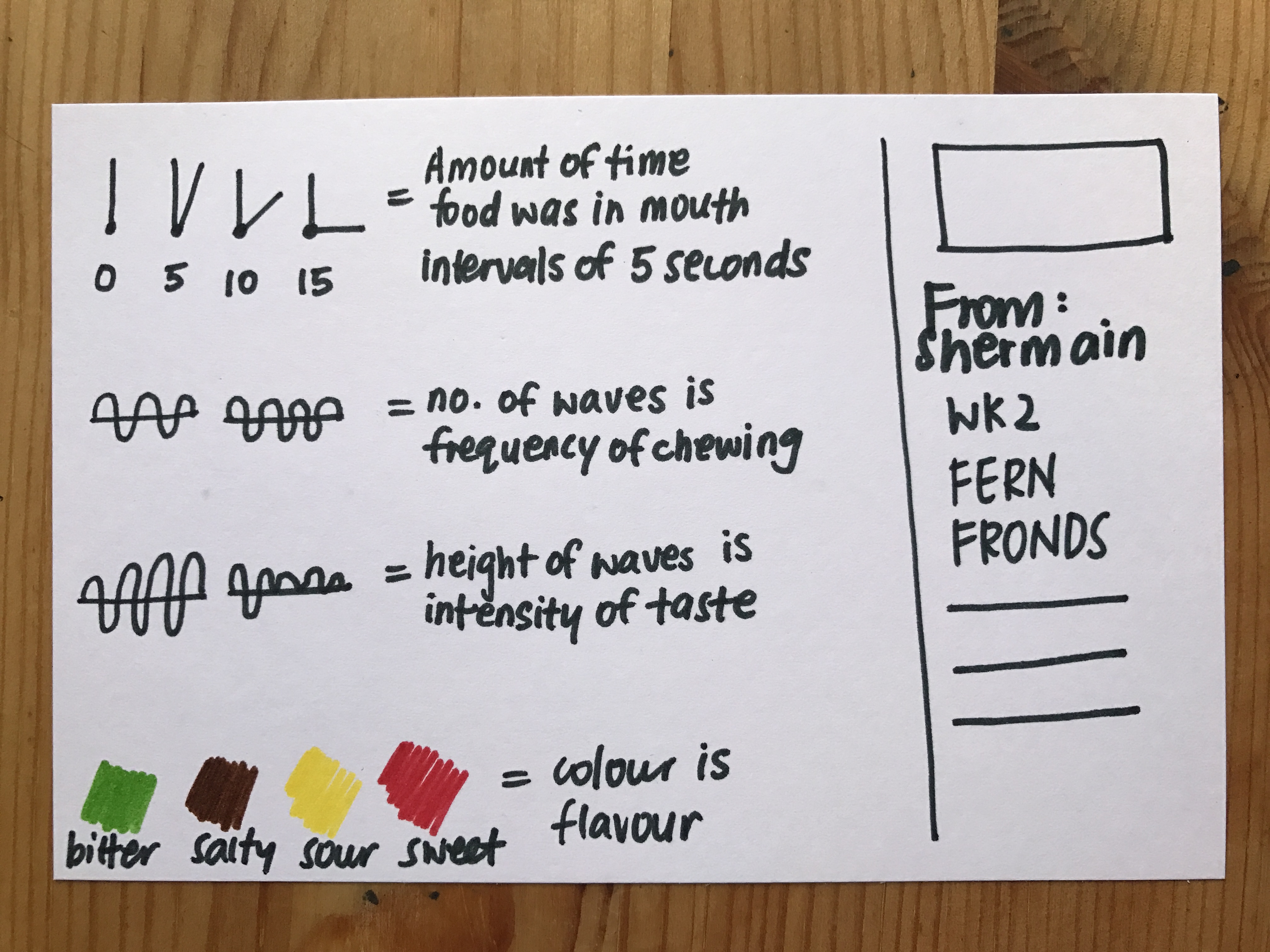 When creating this postcard, I wanted all my information to be centred around the element of time. Hence, I created used the hour and minute hands that is conventionally found in clocks and simplified them into two lines pivoted on a point. They tell the time in the interval of 5 seconds.

In my impression, intensity meant greater higher waves and greater lengths. Hence, i decided to visualise them as waves. In addition, the number/frequency of waves could help me show the number of bites I had to take. The visualisation of wave helped to show the dual nature of intensity and frequency.

Lastly, the 4 flavours that we taste is represented by 4 different colours. These colours are based on the foods that reminds me of a certain taste. For instance, yellow for sour because of lemons.

I decided to use the same elements for both postcards because I’m interested to see how both taste tests played out for me in comparison!