I started off with a tetrahedron shape, as it was not only the simplest one to form (or so I thought at first), but also it has the most unique shape because of its sharp angular points that the other shapes did not. 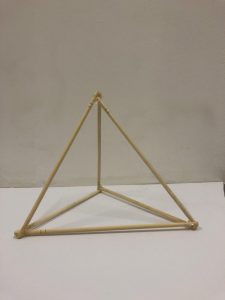 The first model was part of my research simply because it obviously played a big role in my inspiration for the future models. At this stage, I still was not quite sure on what I wanted to do for the second model, but I had these few inspirations in mind. 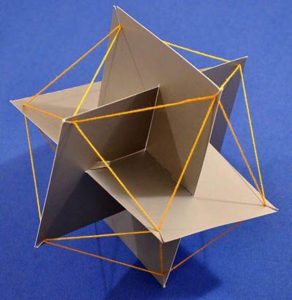 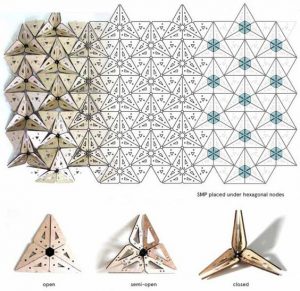 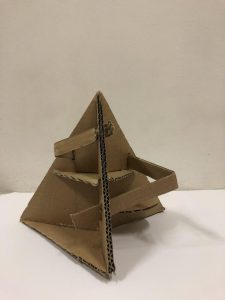 For the second model, I tried forming a solid structure that could hold up well on its own by using joining 3 ‘concaved tetrahedrons’ back to back. But instead of using 3 triangle pieces to make up a ‘concaved tetrahedron’, I measured and cut out diamond shapes, and folded them in half to form the vertical planes, and I found it to be stronger than if I were to glue 2 triangle pieces together.

Upon forming this piece, my feedback was that it was too plain, so I tried to uneven it out by only placing a bottom plane on of the sides, leaving the other two empty. Then, to make it feel less structured and ‘planned’, I attempted to incorporate something that was not quite as rigid as the rest of my structure, and therefore the long rectangular piece of cardboards circling through the vertical planes to form a spiral when seen from top down.

After my second piece was done, came the final and toughest challenge of having to incorporate not only lines and planes, but also to show the process of disintegration. Quite a bit of time was spent researching on the different polyhedron structures that I would like to experiment with, as well as what disintegration meant as well as how I would like to express that. 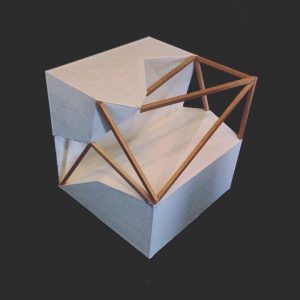 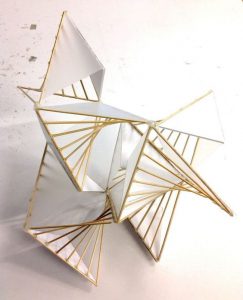 I not only liked how these looked, as they had a certain structured and geometric look to them, but they also felt incomplete, which gave me an idea for disintegration, which was to use different materials to make it seem like when I stripped a layer of my model away, you could start to see the ‘skeleton’ or structure of it. 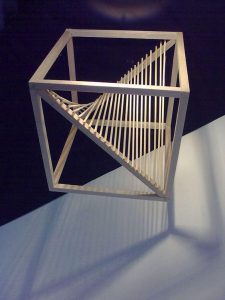 Another thing I really like was the way the rigid lines curved to form a sort of wave in this structure and I wanted to try it out on my model as well.