Pangloss, Pandora or Jefferson? Three scenarios for the future of technology and strong democracy.

The New Media Theory book is a compilation of the different readings and studies from new media practitioners or researchers to take a look at how it came to be, and how it affects us in our daily lives be it technology and information, copyright and politics. Of these readings, I find most interest in this one reading that reviews how evolving technology can impact democracy in society or vice versa.

PANGLOSS SCENARIO
This happens when the policing does not have their own policing system, which means that the government does not keep check on the media companies who are monopolising main communication networks who prioritise the use of technology to drive their sales profit over educating the public on important policies. To some extent, this ‘free market’ of broadcast corporations does help the democratic political culture as it ‘(favors) decentralization, the multiplication of choice, and consumer sovereignty.’ But where its faults could come out would be when the government falls back on stringent policies to stamp out possible tyrannies.

Representative Democracy:
This scenario could happen if the goal of the government/society is to achieve representative democracy. It is a form of democracy that allows elected officials to represent a group of people by enacting laws that would cater to their needs. This is more efficient but could lead to an inaccurate portrayal of the will of the people as the people financially and educationally lacking behind might not get a platform to state their concerns, and the possibility of corruption is more likely.
https://www.thoughtco.com/representative-democracy-definition-pros-cons-4589561 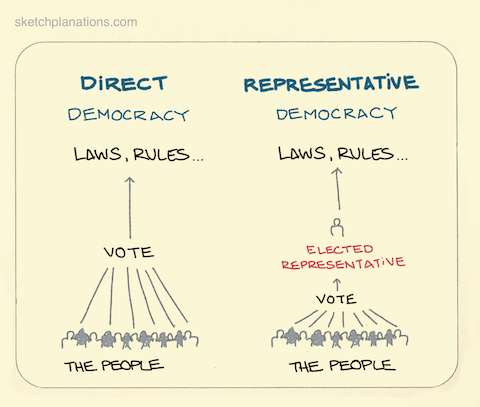 PANDORA SCENARIO
This happens when the government set regulations to control the purposes of new technologies and standardise the messages that they send out to their country. It is the sort of system that keeps track of everything and everyone, sacrificing privacy to efficient use of the communication networks. This puts the power in the hands of very few corporations or the government which can restrict our freedom and knowledge controlled for the means of the government or the self, rather than for the good of society.

Plebiscitary Democracy:
This scenario could happen if the goal of the government/society is to achieve plebiscitary democracy. This is almost a different form of governance compared to the idea of democracy most are familiar with, where the President has unchecked and final say on certain issues.
https://www.thoughtco.com/representative-democracy-definition-pros-cons-4589561

JEFFERSONIAN SCENARIO
This is one of the most progressive ideals of democracy where it is a free society and information belongs to society and it easily accessible and interactive for everyone. Technology can be used to enhance active spectatorship and quality information, to allow individuals to be well-informed on state affairs and given a platform where they can openly discuss ideas and clarify issues with legitimate and crucial figure instead of baseless speculation supported by prejudice instead of facts. This multiple-stage process and involvement of the people serves as a check-in on the government as well as the government on big corporations that ensures true democracy in social equality.

Deliberative Democracy:
This scenario could happen if the goal of the government/society is to achieve deliberative democracy. This ideal is achieved only when the society and the government both actively work towards a democracy that serves greater good for the people and not the individuals.
https://www.thoughtco.com/representative-democracy-definition-pros-cons-4589561

Barber states that the way to go about technological implementation is to first be clear on what type of democracy should be achieved. To also ensure that our political structure is not at the mercy of technology, quality and sense to work together towards a common goal of democracy must be instilled in our political institutions and the character of our citizens.

I like the ideal of social democracy where the government gets more say over state welfare matters, rather than leave it in the hands of a few corporations. But it still functions in a free market state. Basically, just enough interference from the government to ensure corporations are kept in check, but also a level of limitation on government say and more say from the people in order to keep the political institutions in check. True democracy is achieved when equality is ensured by allowing those that are not as financially or educationally secured get a chance to also have a say in the policies that might affect them by ways of genuine imparting of knowledge, and not a means of propaganda. How technology could help with this is by establishing a strong education amongst society on how to use technology and communication networks to properly sieve out content that is needed and necessary for them. The power of technology can be used to mobilise citizens to take more active interest and participation in the way policies are shaped to ensure fewer chances of corruption or majoritarianism.  The second part would be allowing freedom of speech and access to credible sites and sources with different standpoints on politics to the people for them to able to view sources that are not biased towards a certain view. But also, the need to regulate sources to eliminate false or damaging information that could upset and wrongly skew opinions based on prejudice.

For example, media conglomerates and big corporations like Facebook that has the power of technology and influence should have more stringent checks on false information on the site especially during politically sensitive times that could affect the nature of the political and social structure of a country.