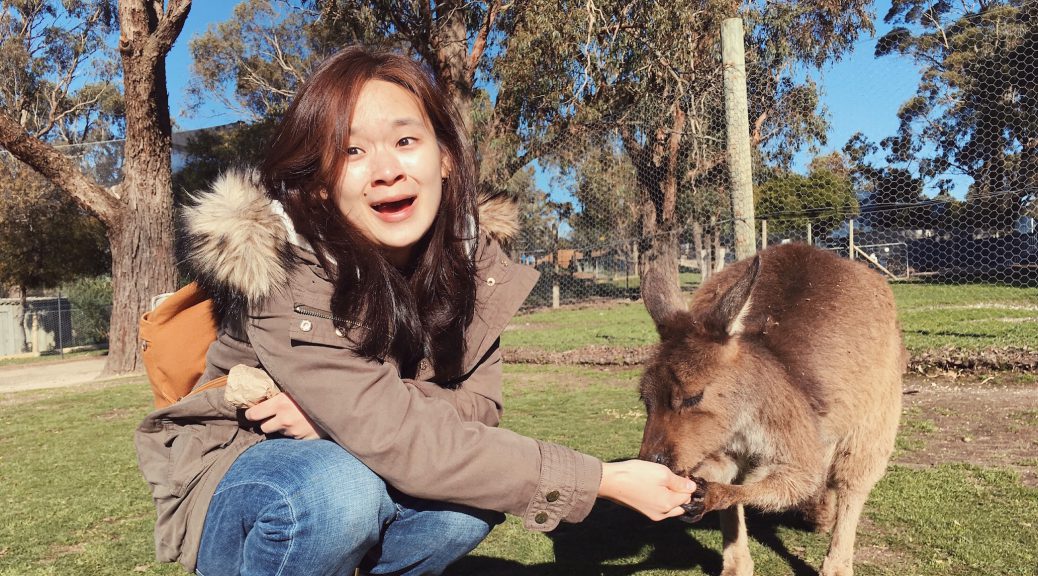 We left our service apartment in a hurry, lacing up our boots in the lift. My friend, Lin, and I were making a day trip to a wildlife park in a Ballarat, a town 110 kilometres north-west of Melbourne. We arrived at Southern Cross station, only to find out that the train service had been disrupted, and we had two minutes to catch the only outbound bus to Ballarat. Thankfully, we did.

Our journey to the west was very pleasant. We passed pastoral scenes of cows, trees, hills and farms. Lin and I were beaming with anticipation about meeting kangaroos up close.

Two hours later, we arrived in the town of Ballarat which looked particularly empty that day. Having dozed off on the ride, we were the last of five passengers to alight. As we walked toward the rustic station doors, we heard a low voice call out from behind in Aussie-inflected Mandarin:

Surprised, we turned around and saw a man in his early 30s. Before we could squeak out a response, he shot another question, this time in English: “Where are you from? Beijing? Shen Zhen?”

We courteously replied, Singapore. “Oh, Singapore,” he said, walking toward us and speaking enthusiastically about how lovely he thought our country was, except for our strict gum laws.

“Don’t people get caned for chewin’ gum?” he asked again. This seemed to be a common misconception so we assured him that chewing gum is allowed. However, selling gum might land one a hefty fine or a staycation at Changi prison.

“If you guys don’t chew gum, how d’you keep your teeth so white?” he asked with a deep smile.

“Dentists,” I replied, with a look of caution.

By then he had sat himself down on the bench by the station doors, closer than necessary, and we noticed that he had bandages on his right fist and forearm. While we were bundled up as thick as sheep in layers of fleece and wool, he was wearing nothing more than a shirt, bermuda shorts, socks and sandals. He continued his questioning, asking about our ages and what we were doing back home. Being a pair of non-confrontational Asian girls, we obliged, and he seemed a tad too happy upon hearing we were 21.

“So, what are you girls doing in Ballarat?” he asked, staring intently. With growing hesitation, we explained that we were on a day trip from Melbourne to visit the Ballarat Wildlife Park.

“I have a wildlife park. In my home.”

He replied in a serious tone. He proceeded to roll up his shorts, exposing even more of his legs to the chilly winter wind. Are crazy people usually climate-resistant? Lin glanced at me, trying to convey with her eyes that we should make an exit, however the man continued,

“You girls ought to be careful. There are many bad people in Ballarat… Why don’t you come to my place. I’m on the way to pick up my car.”

Upon hearing this proposition, we thanked him, declined and excused ourselves, insisting that we were late for our bus and were only in town to visit the (real) wildlife park. We left the station, debating the man’s intentions till we stopped at a map signboard outside, trying to orientate ourselves using our trusty Google Maps application. Panic set in when we noticed a lightly dressed sandalled figure approaching us from the periphery.

The man from the station had reappeared. “I’m going to pick up my car now, so I can show you around.” Gesturing at my mobile phone, he ordered, “Take down my number. O, FOUR, FOUR…”

I interrupted him, maintaining that we were late. We thanked him, said a curt goodbye, and walked as fast as our short legs could take us without looking too obviously like we were running away. We glanced behind and saw that he was following us.

Born and raised catholic, my faith miraculously grows in proportion to fear. Barely religious, I started mumbling Hail Marys and making the sign of the cross every road junction.

I like to think that it was due to our masterful manoeuvring through side roads and alleys that he lost our trail. But, more likely, he got bored of following us after several blocks.

Despite getting lost once more, the Ballarat Wildlife Park was thoroughly enjoyable. At dusk, we left the town with two discoveries — firstly, kangaroos had surprisingly sharp genitalia; and secondly, perhaps we shouldn’t speak to strangers so indiscriminately.