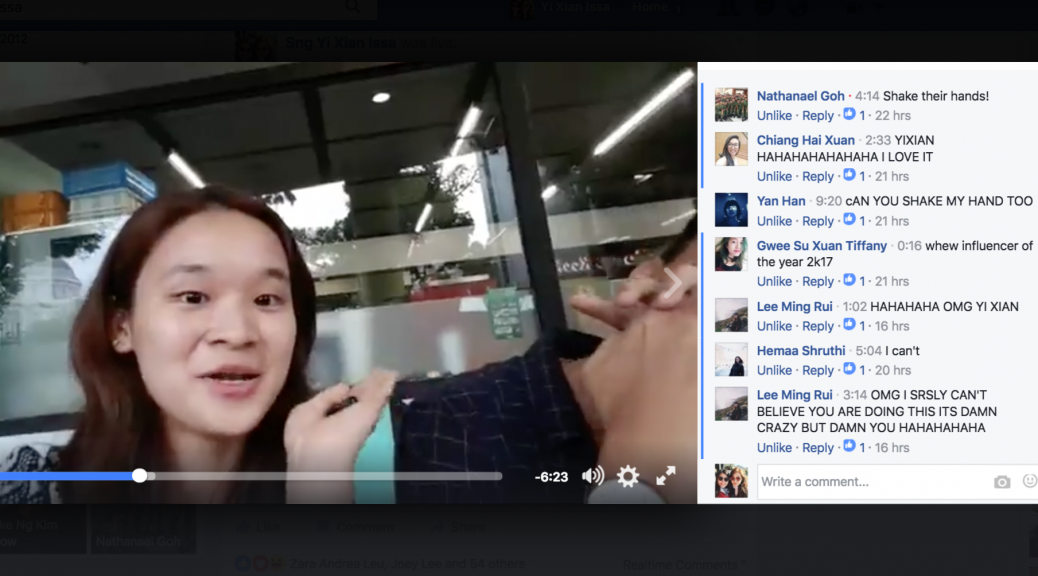 Please click here for my 2nd Facebook Live broadcast. This post has been updated to include more information about influencers and online celebrities in Singapore’s social media landscape.

This week I wanted to experiment with performance, persona, parody, and the context of social media live streaming.

Social media influencers and online celebrity beauty and lifestyle bloggers have become ubiquitous on the Internet and pop culture landscape. In Singapore, influencers have a sizeable following on social media, especially Instagram. A large subset of influencers are good-looking young women who offer fashion inspiration, beauty advice and are sometimes ‘famous for being famous’. Companies often approach influencers for product sponsorship (marketing through individuals) which they will share with their followers. These online personalities typically build their following on multiple social media platforms and may have accompanying Youtube channels with videos like makeup tutorials, fashion hauls and Q&As.

Although there are multiple positive aspects of social media and influencers, it has been criticised as rather narcissistic and unhealthy especially for youth, if they are too invested in online fame and followers.

It was very intimidating yet refreshing to take on a persona totally different from myself and commit to it unabashedly and without breaking character. I approached strangers in the SMU campus with the absurd proposition of giving them my autograph and convincing them to become my fans.

As part of the performance, I appropriated online vernacular (e.g. #follow4follow and “subscribe to my channel”) and the way online personalities interact with their fans locally and remotely through live streaming and ‘vlogging’.

Compared to my first broadcast, the second had more views and responses. This is probably because the broadcast was humorous and relatable to users of social media. It was heartwarming and surprising to see comments and reactions from people I haven’t been in touch with for years.