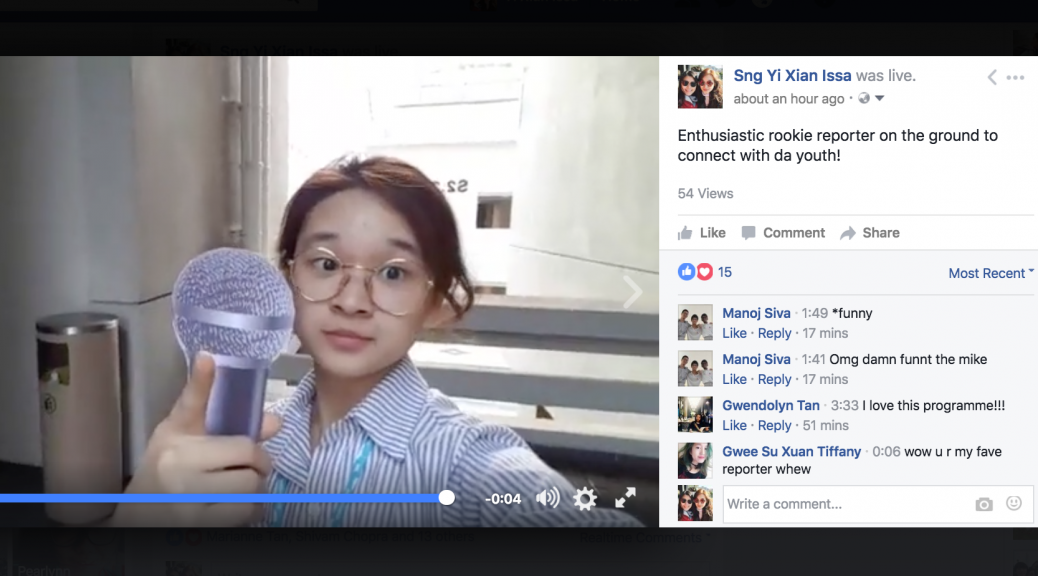 This week I decided to explore another persona: a zealous and enthusiastic rookie reporter who has her first assignment as a youth correspondent at NTU. I appropriated terms and vernacular that we often hear in news programmes such as announcing the current local time and moving between site and studio.

The video in the link is actually the second broadcast of the day. In the first broadcast, I was standing in an open walkway and approached people coming down the stairs and from the buildings behind. I realised that location matters in inviting participation as the people who were walking were less likely to stop and talk to me.

‘Programme viewers’ watching the live broadcast also commented on how the youth did not seem keen on being interviewed. After 3 unsuccessful attempts at engaging an interview, I maintained the context of a live programme and informed our viewers that we were unsuccessful and would try again in a few moments.

A few minutes later I tried a second broadcast but at an open area with tables. Since they were already seated, it was harder to refuse and thus easier to engage participants into the broadcast. To maintain continuity (for viewers who had seen the earlier broadcast) and to emphasise the ‘liveness’ of our mock news programme, I acknowledged the earlier difficulties in the conclusion.