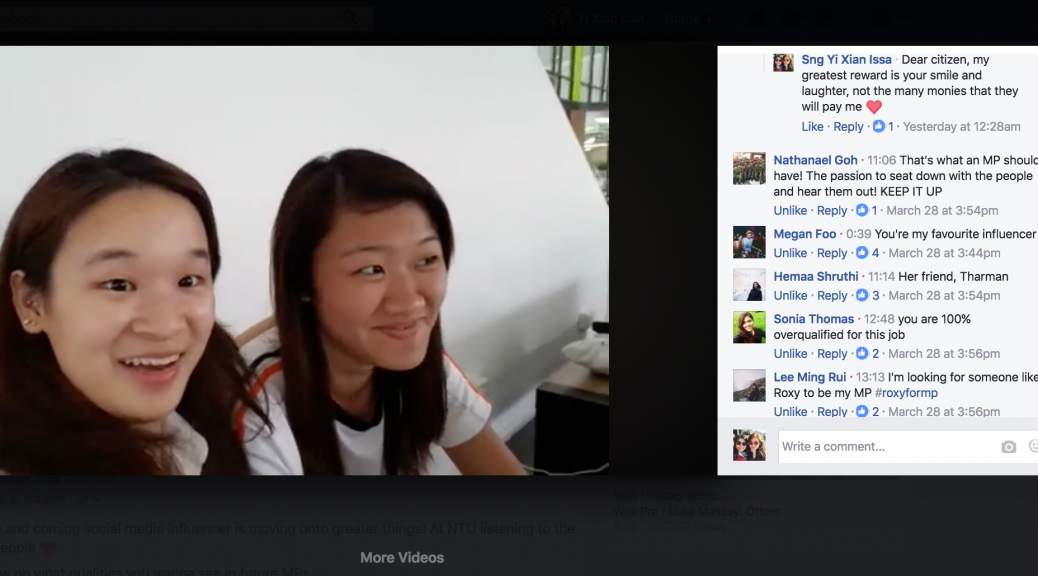 Please click here for part 1 of my final project 🙂

For the first instalment of campaign activities, Roxy decided to conduct some on-the-ground research and hear first hand from the people about qualities they expect from aspiring Members of Parliament (MPs). She also asked them about their concerns and how she could address them once she was elected.

I incorporated frequent behaviour of influencers such as requesting brand sponsorship from Din Tai Fung (due to the resemblance of The Hive building to Dim Sum steamers), showing followers their outfit of the day (#OOTD) and describing it as ‘minimalist’ (a very popular tag), and asking followers to comment what they think.

I approached 3 different groups of students and received very different responses. I found it interesting how even though my project employs persona and parody, the varied responses are rather reflective of local attitude to politics, such as being indifferent, neutral or involved.

I asked questions such as “Do you have anything to say to the citizens watching live?” to connect the first space public with the third space online audience. This helped reinforced the liveness of the situation for both audiences, with some viewers commenting about the interviewees.

I was turned away by the second group of citizens I tried to speak to. This humanises Roxy, who can seem totally self-absorbed and in her own world (she thinks the Deputy Prime Minister is her friend, calling him Tharman casually). More importantly, this rejection emphasises the liveness of the experience through the unplanned. It also heightens the authenticity of Roxy the persona as Prof. Craig and Tissa from UMBC have summed up really well in their comments on last week’s post (see screenshots below). In addition, the online audience reacts to these unexpected happenings in real time by commenting.

While I enjoy how these mistakes and rejections reinforce the ‘liveness’, I do think I could be more prepared when people say “no” in the future. For the next 2 broadcasts, I will prepare some recovery strategies to have a smoother broadcast.

To be honest, these broadcasts can be very daunting. Approaching Singaporeans with a camera and a loaded subject nearing exam season may not be ideal. However, I feel encouraged by the spontaneous reactions of some interviewees, our interactions, and the online comments. As a ‘host’ of the broadcast, Roxy’s aim is not to direct the event, but rather to create a comfortable and engaging space which will evolve with the unique contributions of both online and ‘IRL’ audiences. Despite the mistakes, this is the reality of live broadcasting — its unfiltered, unexpected and inherently social.