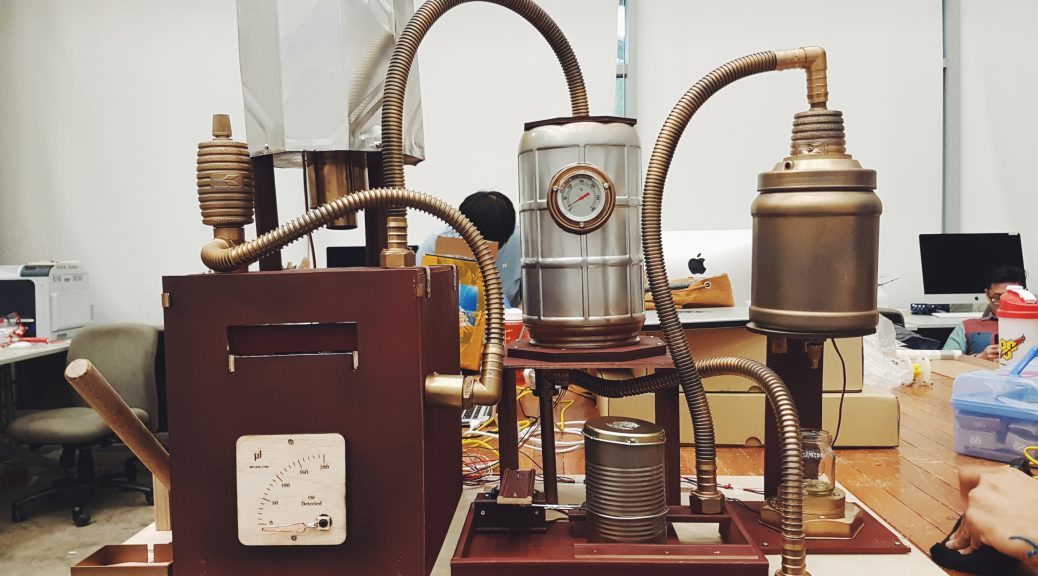 The Renewable Oil Conversion Machine is a speculative invention that harvests and converts human facial oil into biodiesel. It seeks to resolve future energy crises and shortages by producing alternative, renewable sources of energy. With energy consumption at a historical high, the time has come to explore untapped resources such as mankind’s infinite supply of sebum and facial oil.

This pseudoscientific system is plays on illusion and movement. It is essentially a chain reaction which mimics the chemical process of converting oils to biodiesel. I love how the machine goes through a very elaborate process just to secrete one teeny tiny drop of oil. It is highly-laborious and a poor use of resources, making it even more ludicrous!

The aesthetics and mechanisms were inspired by antiquity, steampunk and industrial machines. As much as possible, I wanted the machine to give off a fantastical, mad-scientist-wacky-invention vibe.

The interactive machine invites users to freshen up by wiping their faces with the provided oil blotters. A pressure sensor below the tray detects that an oil blotter has been taken, triggering the mouth of the machine to open automatically. This prompts users to place the used blotter into the custom-sized tray for processing.

Next, users push the lever, retracting the sliding tray back into the machine for processing. The blotters are made of highly absorbent bibulous paper. They turn transparent when it comes into contact with oil. Utilising this characteristic of oil blotters, the machine is able to detect the amount of oil on each blotting sheet using a light sensor and LED. The slider is made out of clear acrylic so the LED at the bottom can illuminate the blotter. The light sensor above detects how much light passes through (higher transparency = more oil detected).

This value is then reflected in an ‘oil detected’ meter on the front of the machine. The oil detected meter was a later addition and not in the initial plan. The light sensing was intended to discern between lightly-used and fully covered blotters, which would then affect the number of oil drops dispensed at the end. However, since I was already getting data, it could also be channeled into the meter as feedback to guide users through the machine.

Taking a blotter and pushing the lever were programmed as mutually exclusive actions (i.e. the slider tray won’t open unless it is closed, vice versa). This is to filter out unexpected user behaviour such as taking blotters twice.

After getting a preliminary reading of their oil level, users are invited to follow the conversion process. This is done through:

The machine is designed as separate modules to make adjustments and alterations easier. The external housings can also be removed. 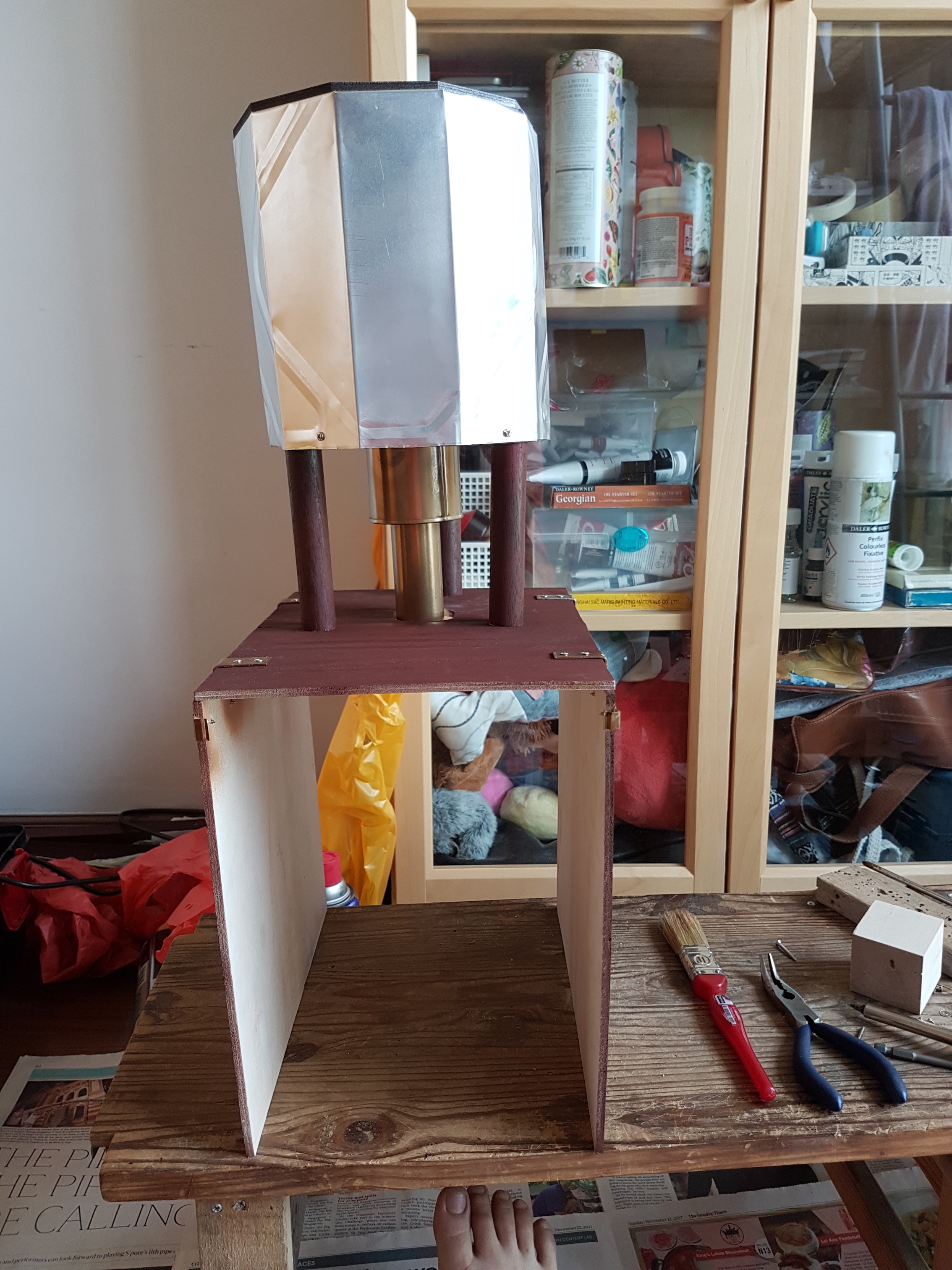 The slider was the most complicated module as there was a lot going on in a small space. This included 3 motors, sensors, lights, the slider mechanism, trap door mechanism to dispose of used blotters, a bin to collect used blotters, oil detection meter and bell.

There were hiccups along the way which I only discovered through making a smaller prototype. For example, due to static, the oil blotters would stick to the acrylic tray and not fall as intended. They wouldn’t slide down with gravity even if the tray was tilted steeply!

In the name of tinkering and experimentation, I sacrificed my desk USB fan to test whether blowing the blotter off was a possible solution to the static. It worked but only at certain angles and was not very repeatable.

In the process of building, the machine increased in size and complexity. Bringing the modules together, I could see what was lacking in terms of feedback and affordances. For example, the bell was a later addition to the system. It provides audio feedback about the completion of the ‘heating’ and ’emulsification’ process. Without the sound as signal, it would be harder for users to follow the machine’s process.

However, this made the slider module even more complicated as the support dimensions did not take into account a bell and another motor. Due to the lack of space, I decided to double up the function of the trap door to make it ring the bell. This proved to be very challenging as the small motors I used initially, while compact, were too weak. After a few runs, it could not repeat the motion consistently and even weakened the support structure by jamming it unintentionally.

I was tempted to switch the analogue bell out for a digital recording of the bell sound. However, after a lot more tinkering, I replaced the small motor with a stronger one and found the ideal limits for ringing the bell and controlling the trap door. This allowed the motion to be repeatable yay! 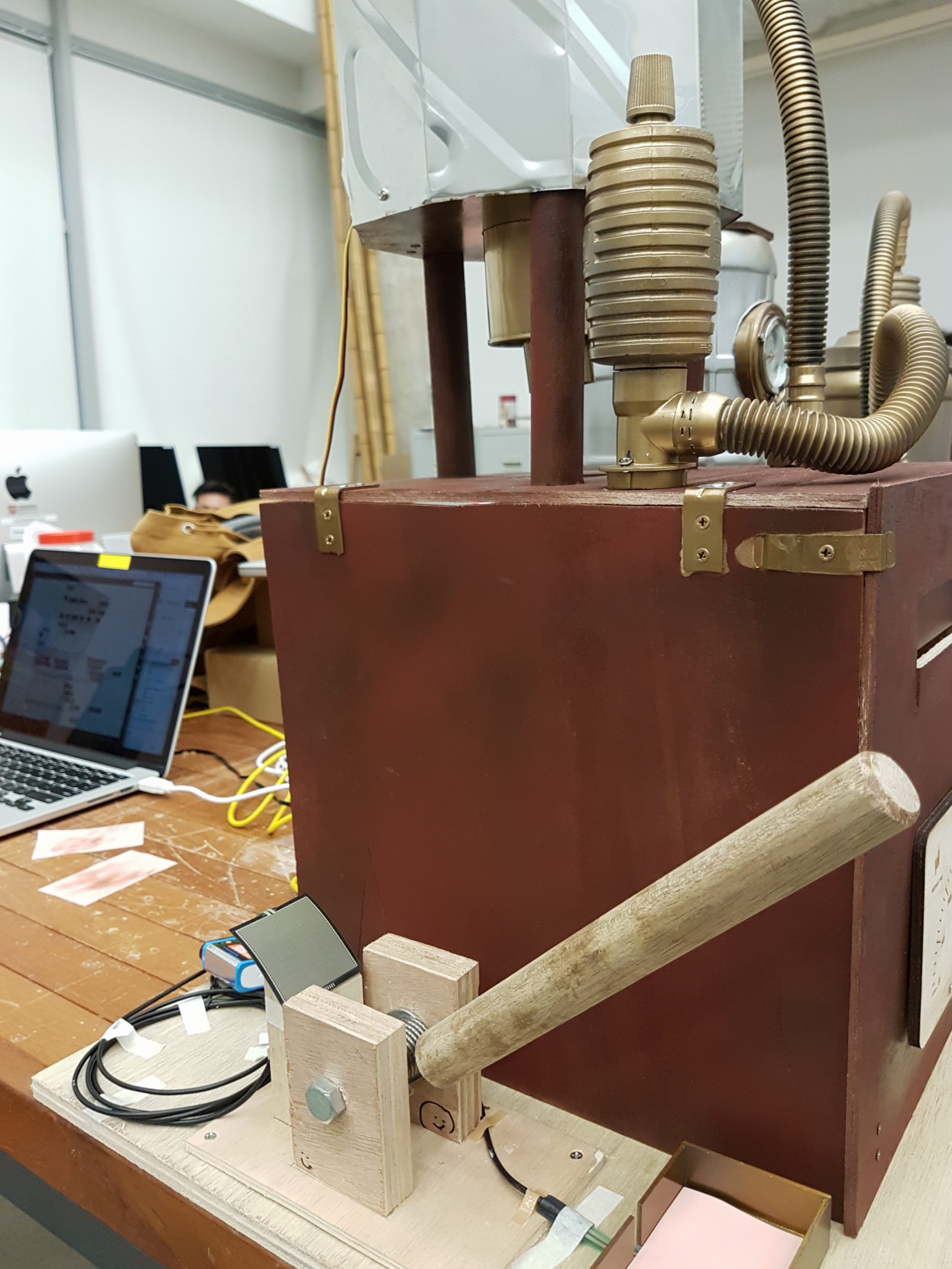 In line with the wacky-invention/mechanical vibe, instead of a button, I wanted users to push a lever to trigger the process. This interaction felt more fantastical and almost cartoon-like. 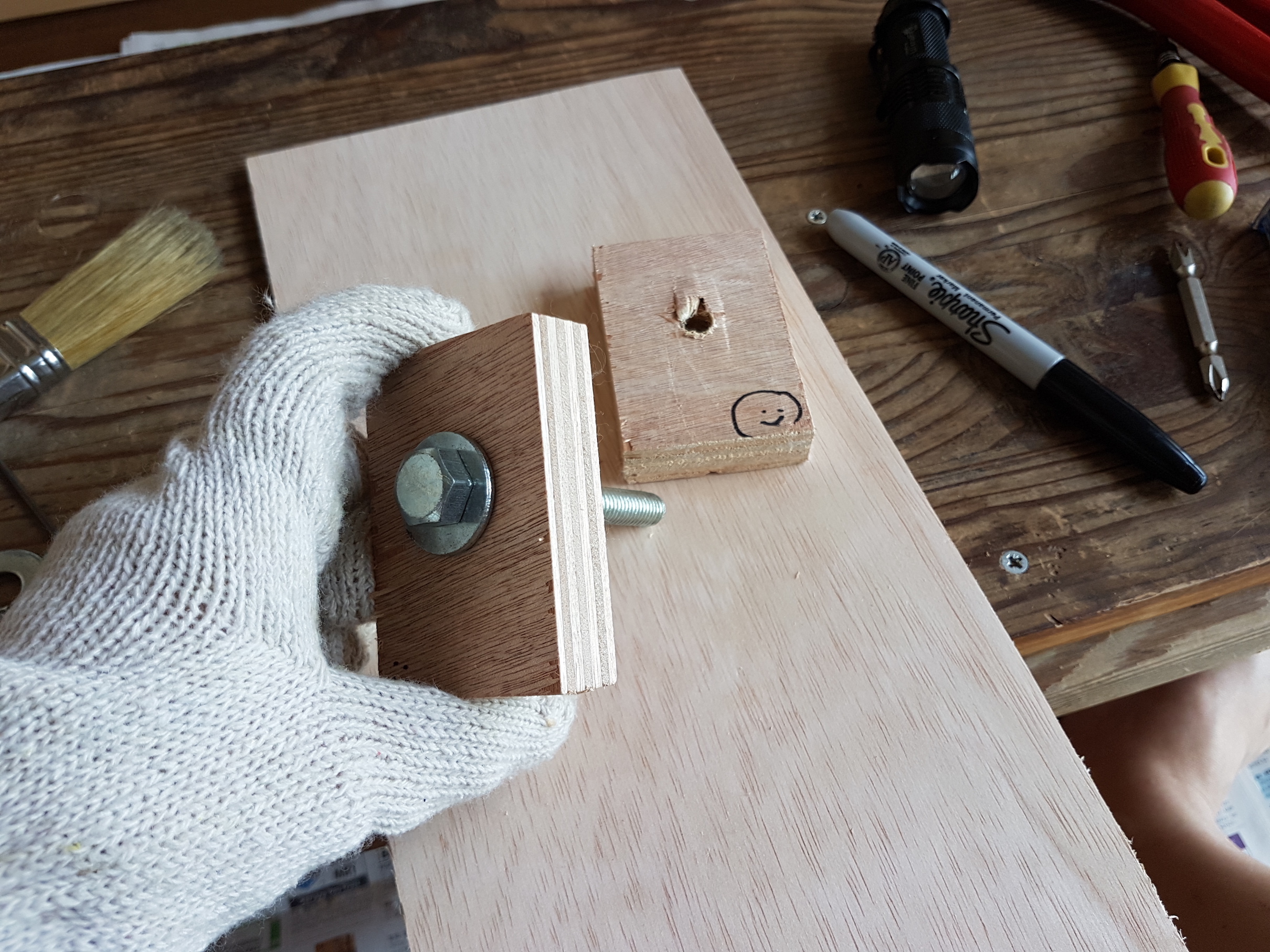 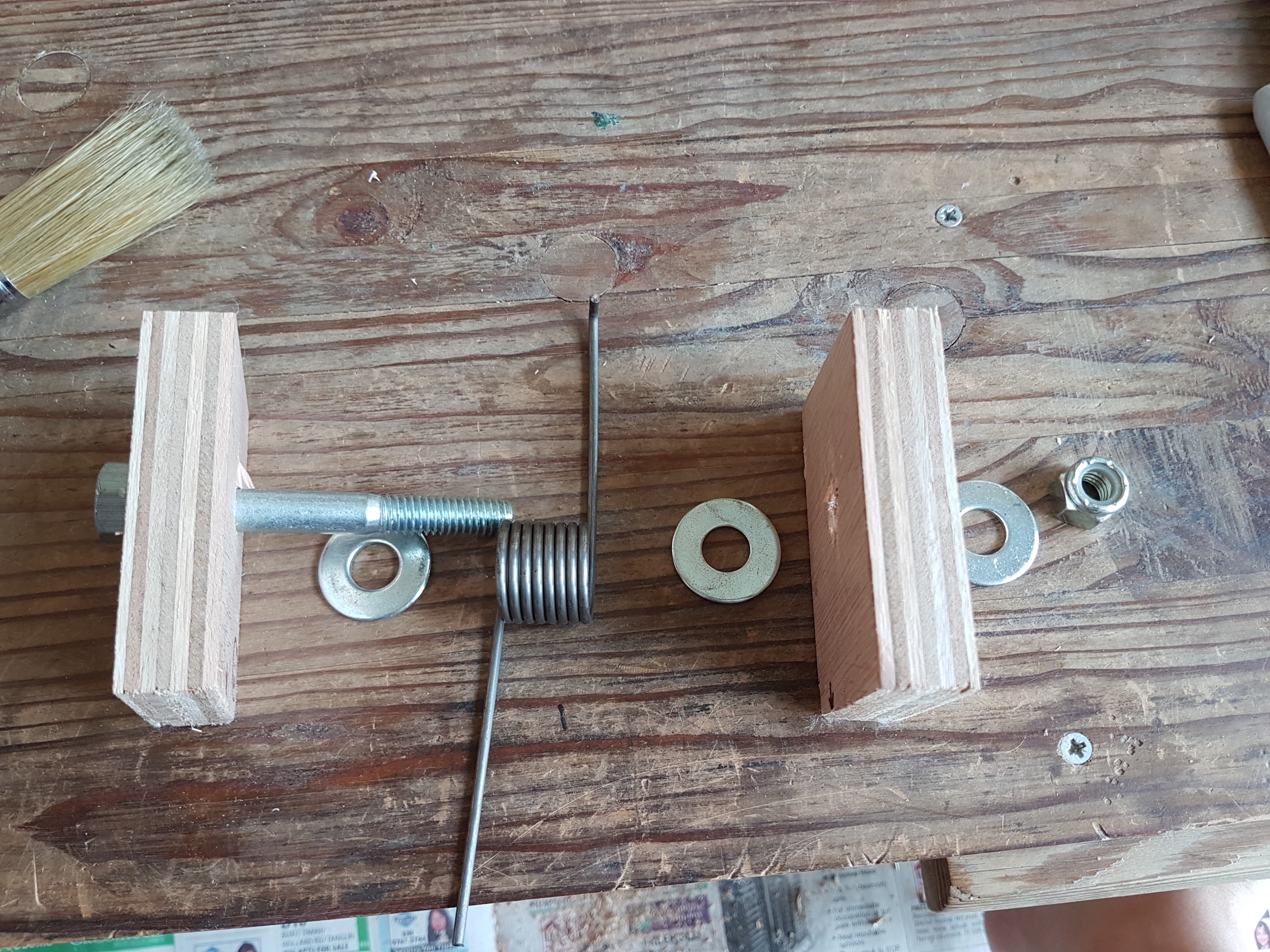 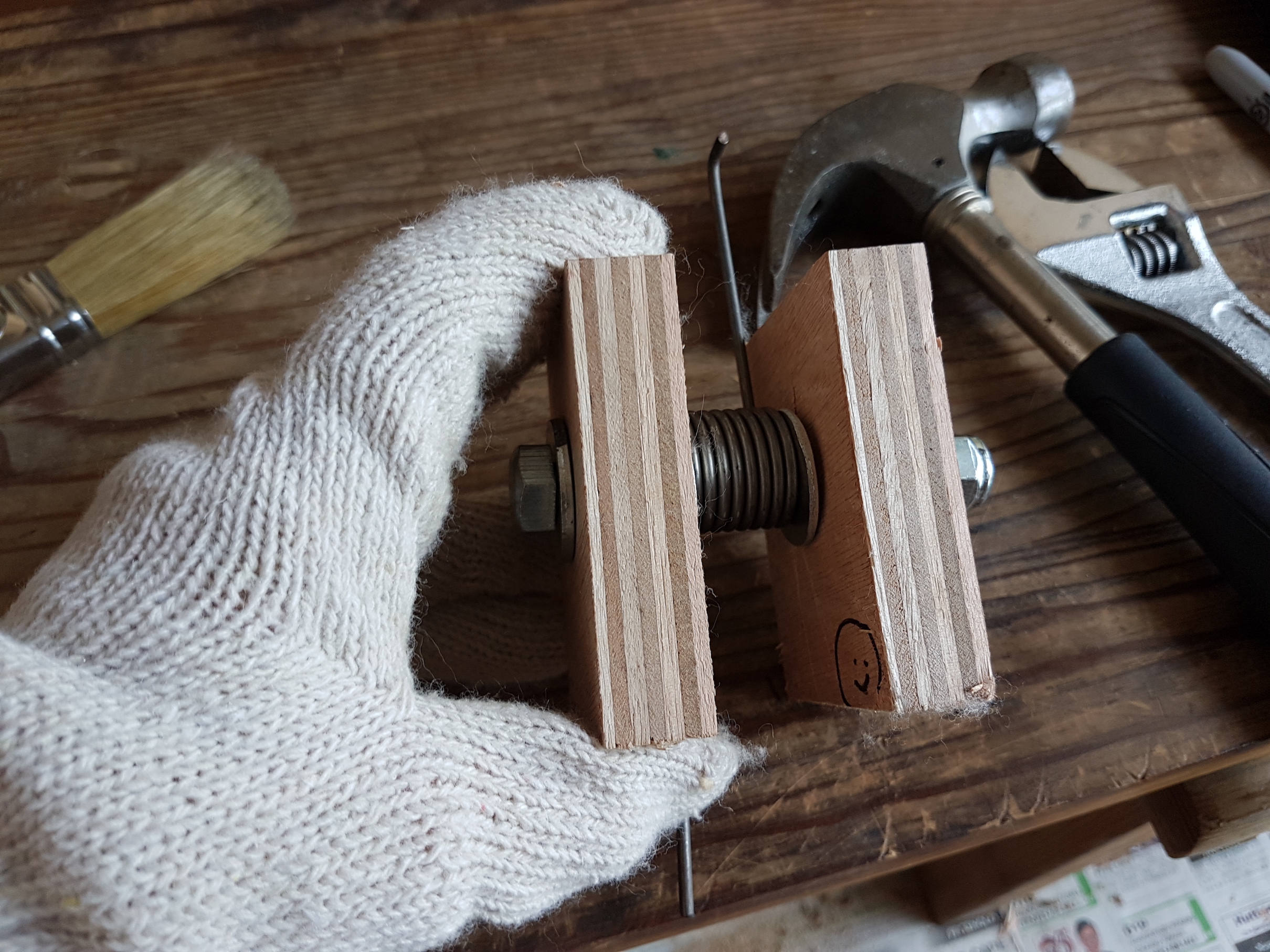 While metal is strong, it is very hard to work with… sparks flying! 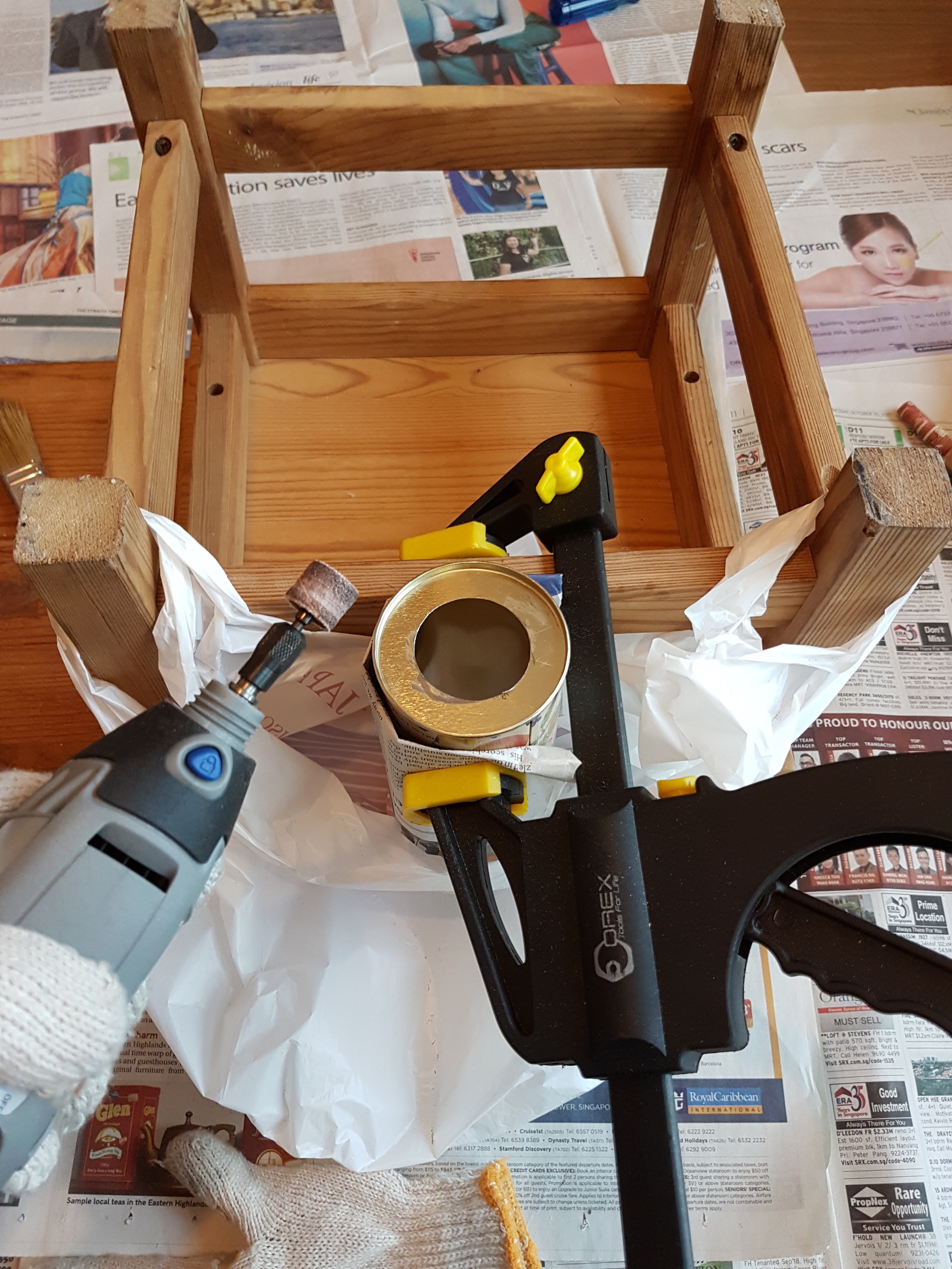 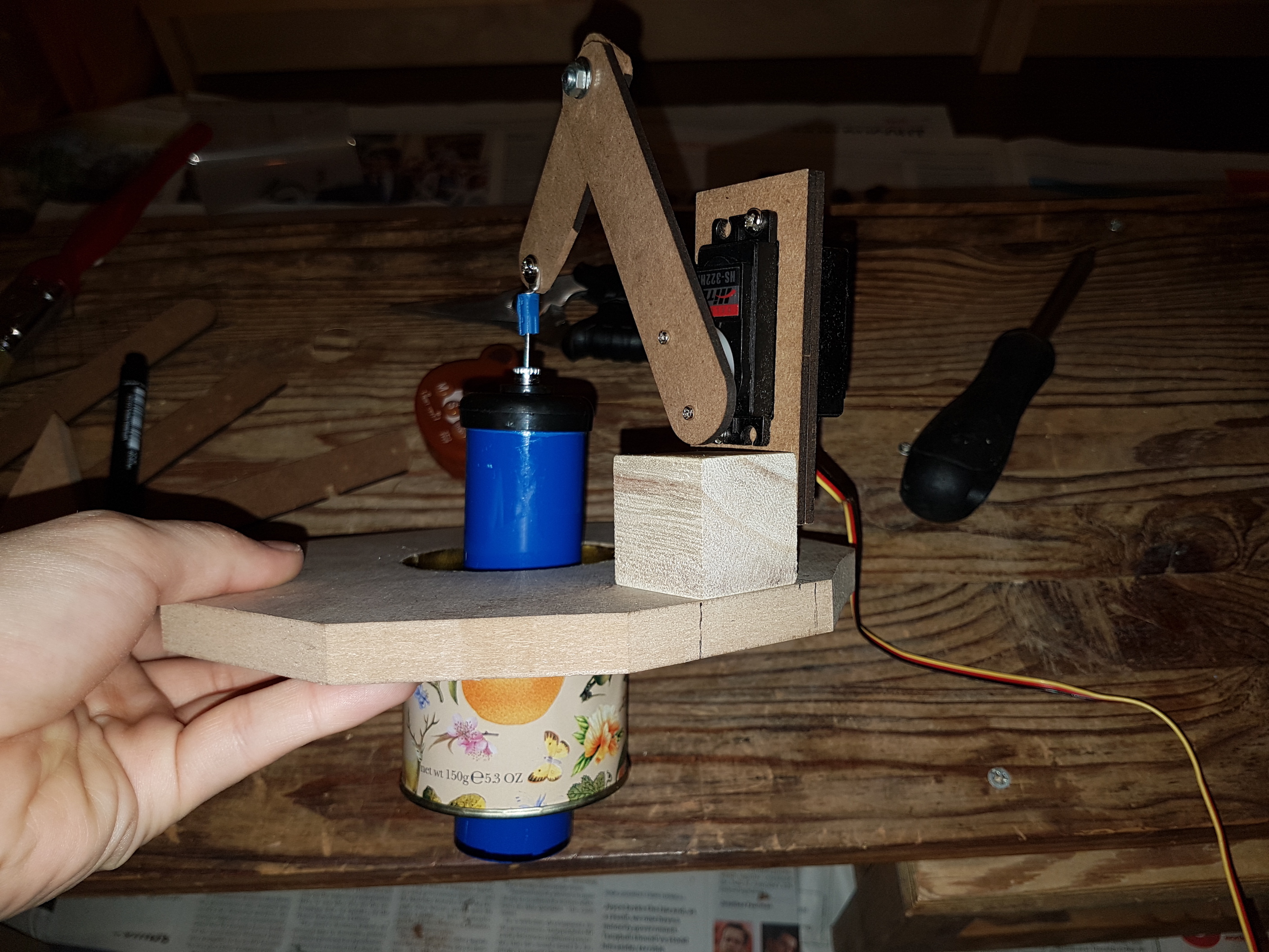 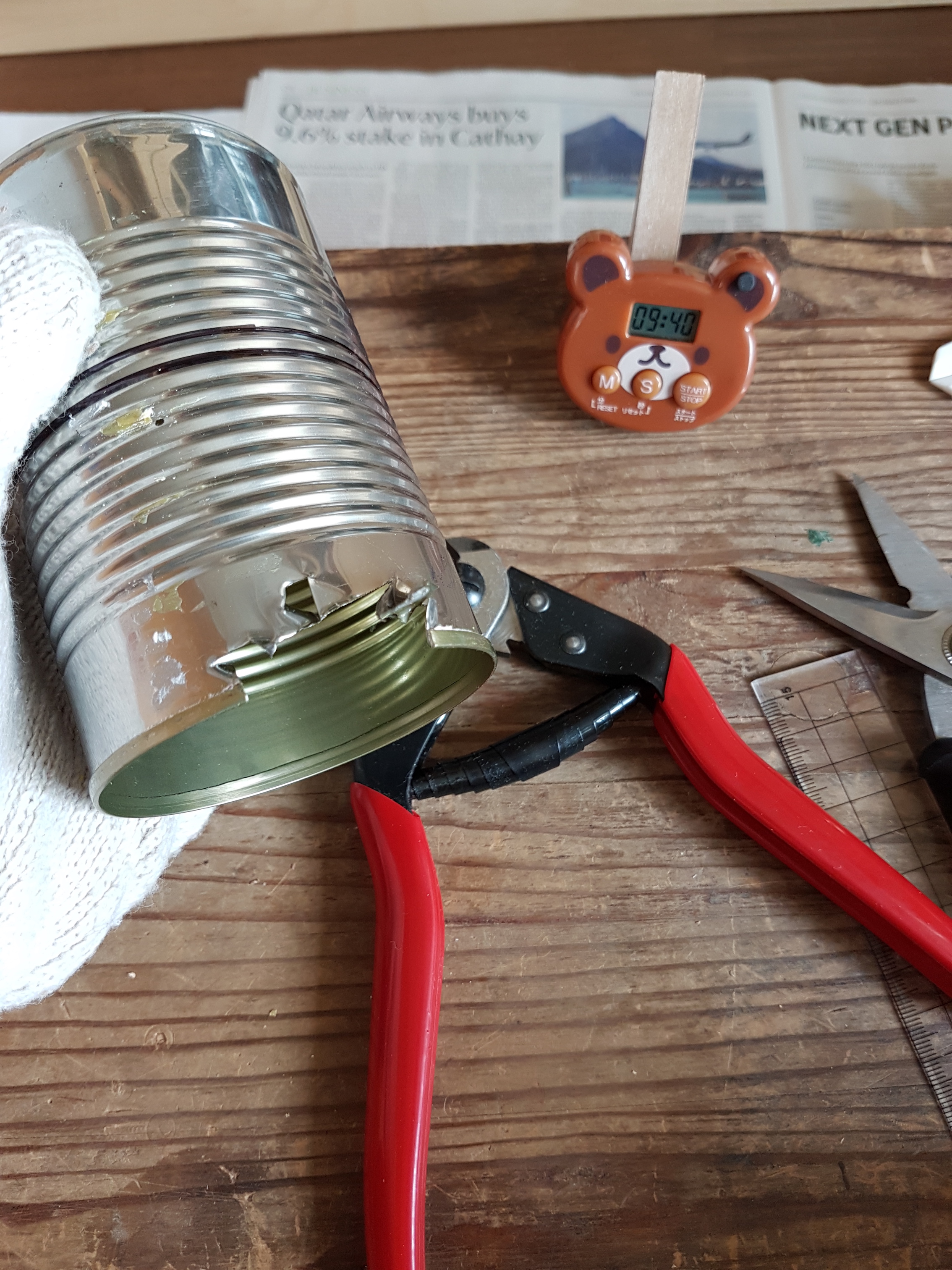 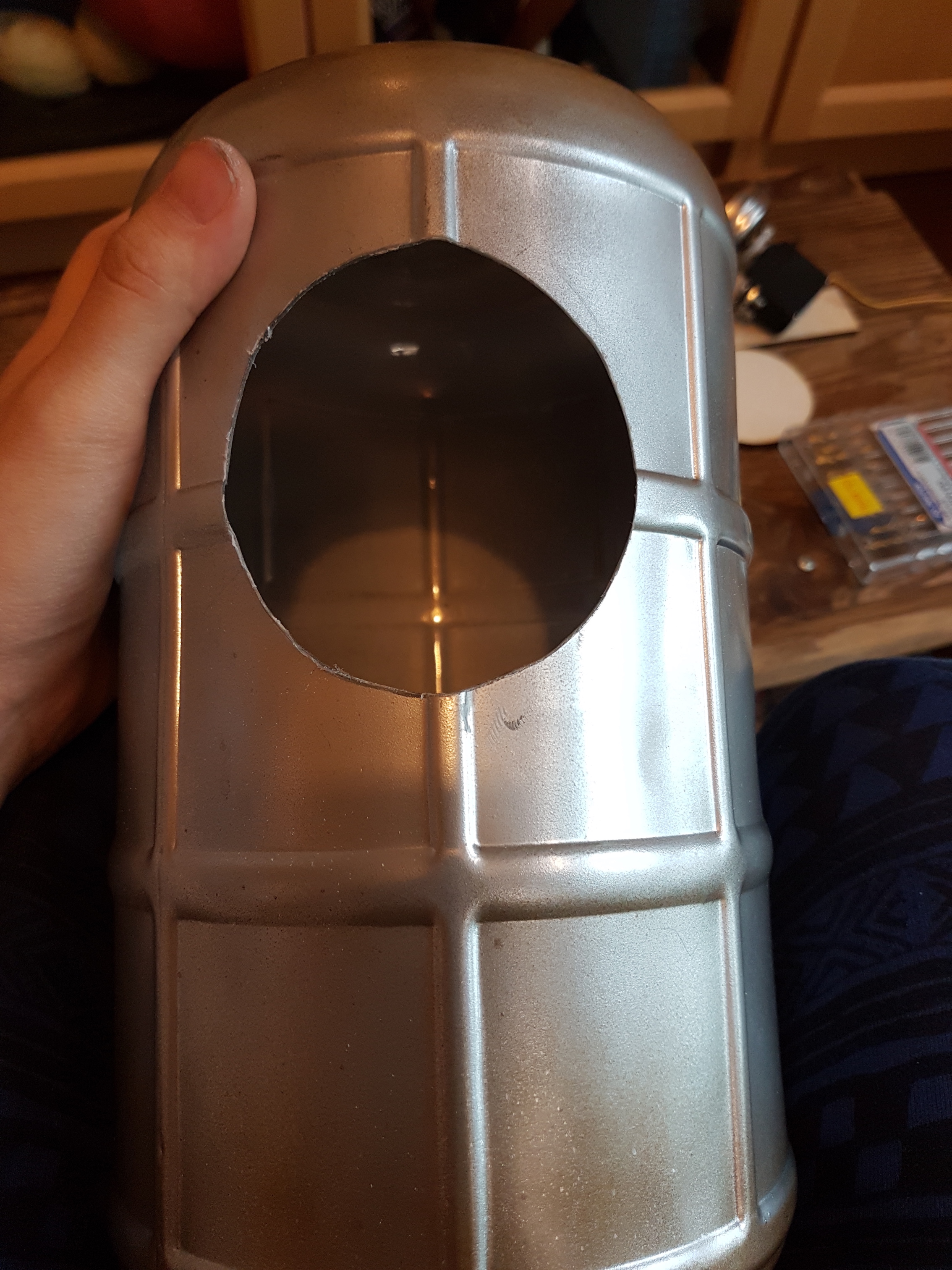 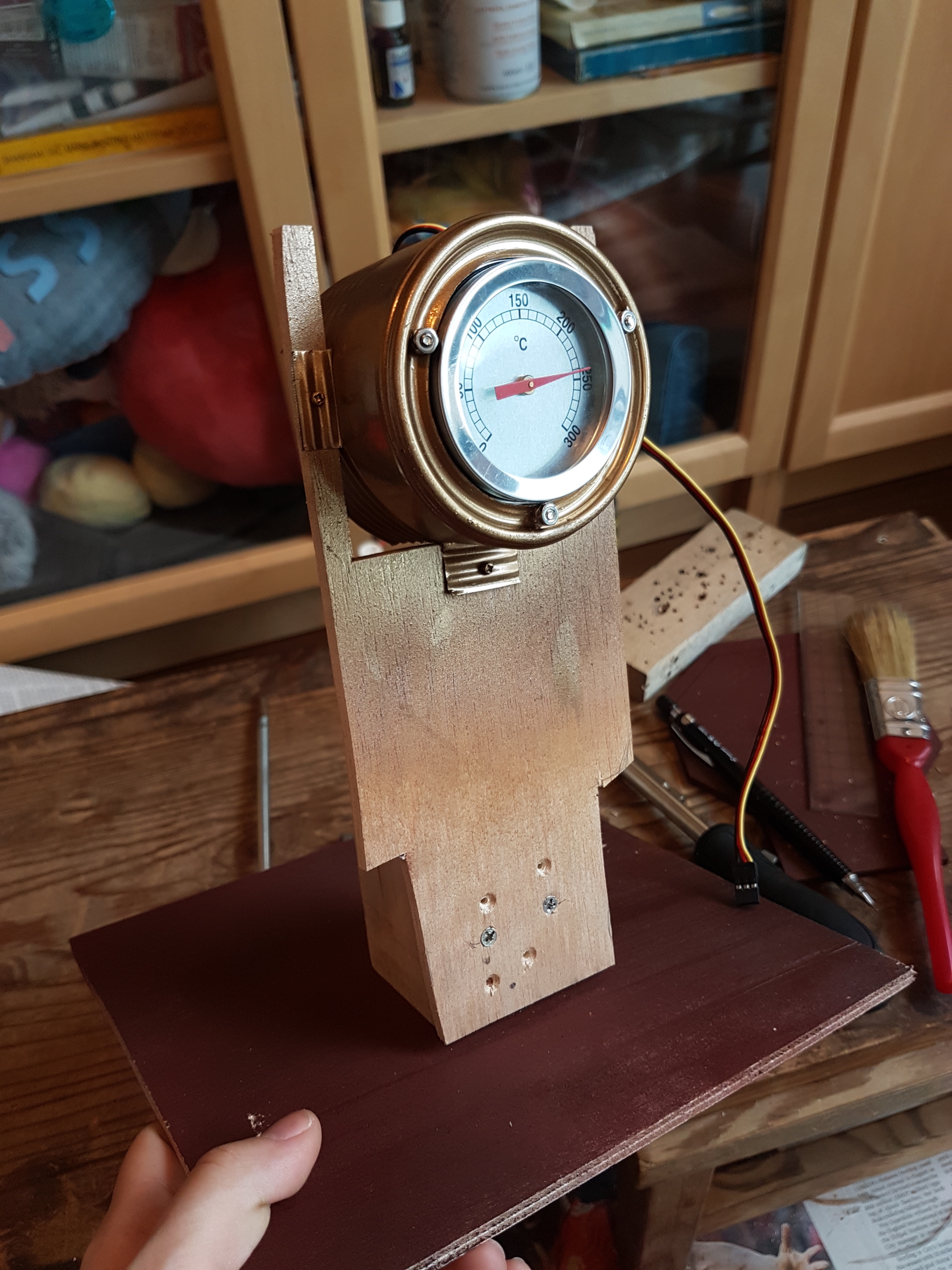 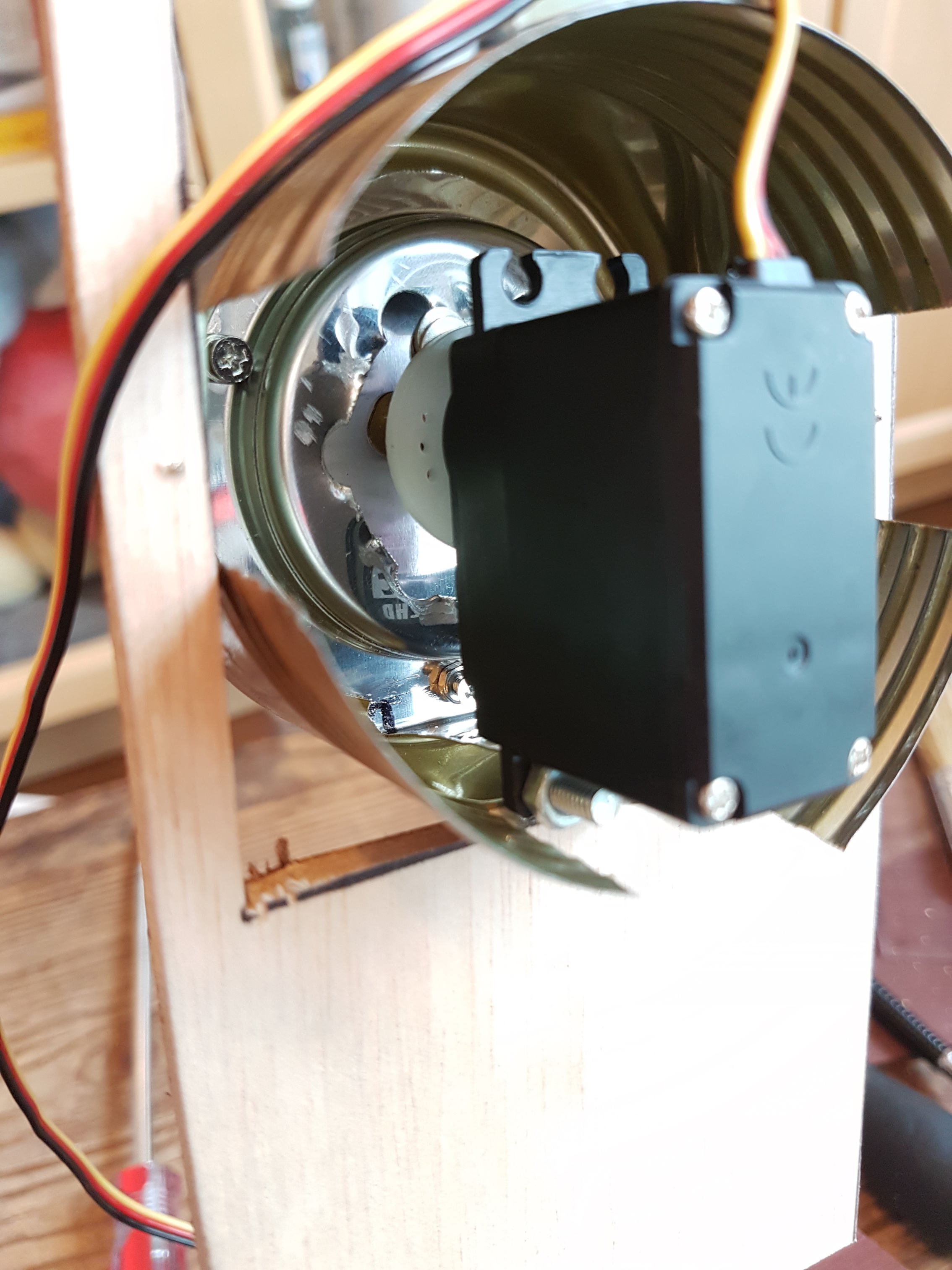 The mixer followed the same design as the preliminary prototype. I added a wooden skirting around to conceal the motor and guides. With a couple of marbles in a tomato can, the mixer module uses simple harmonic motion to generate the flowing and oscillating noise. 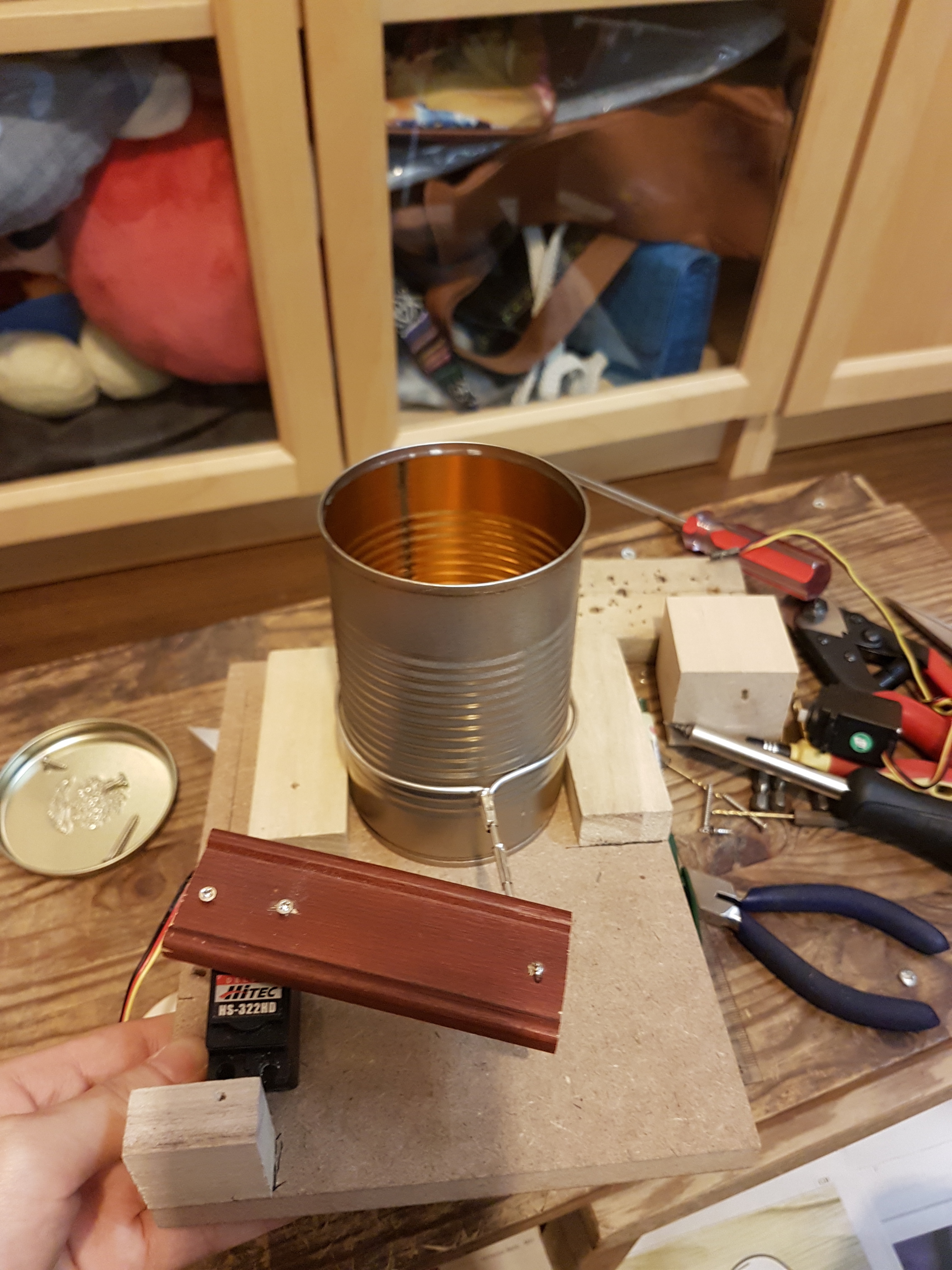 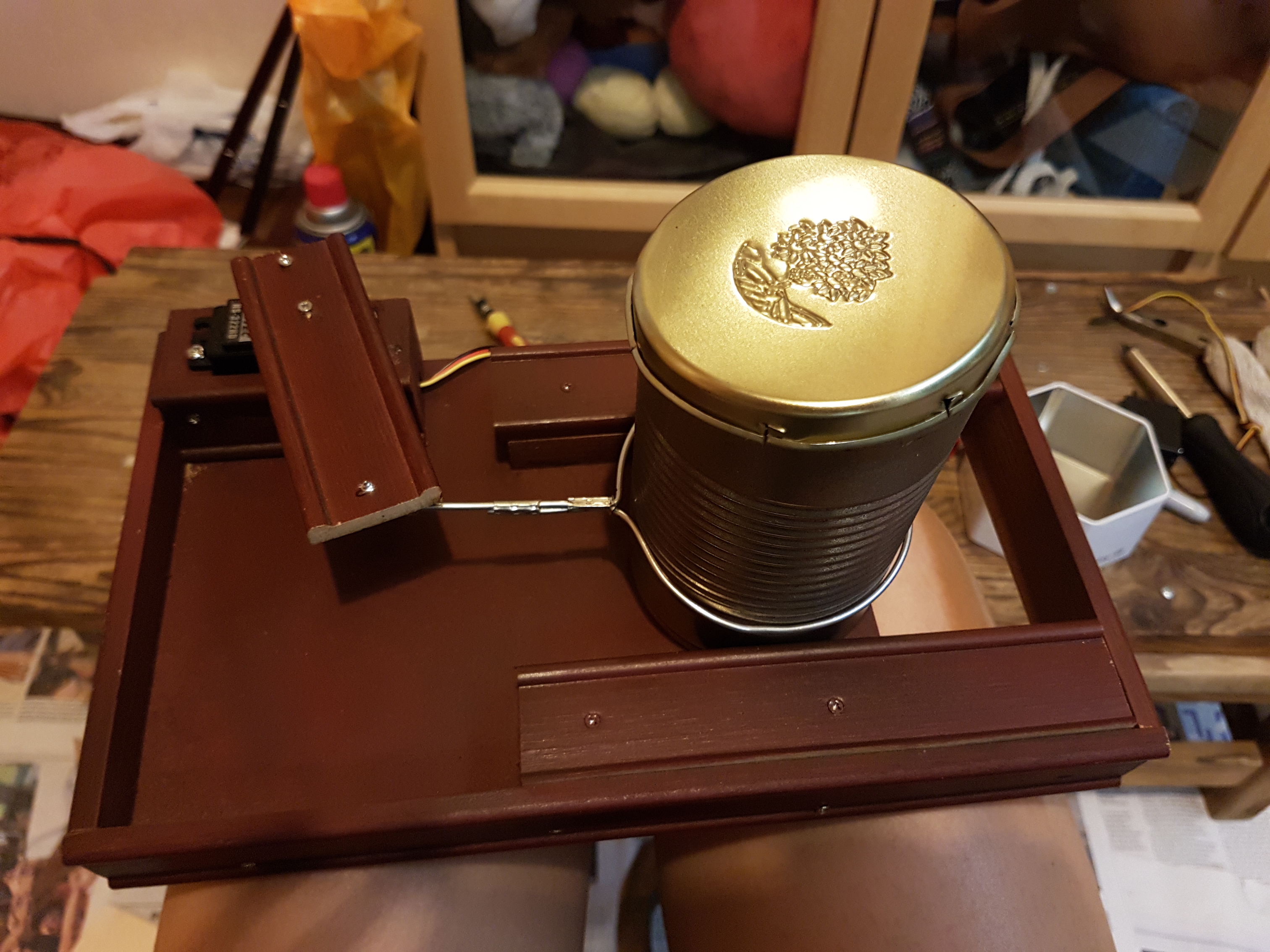 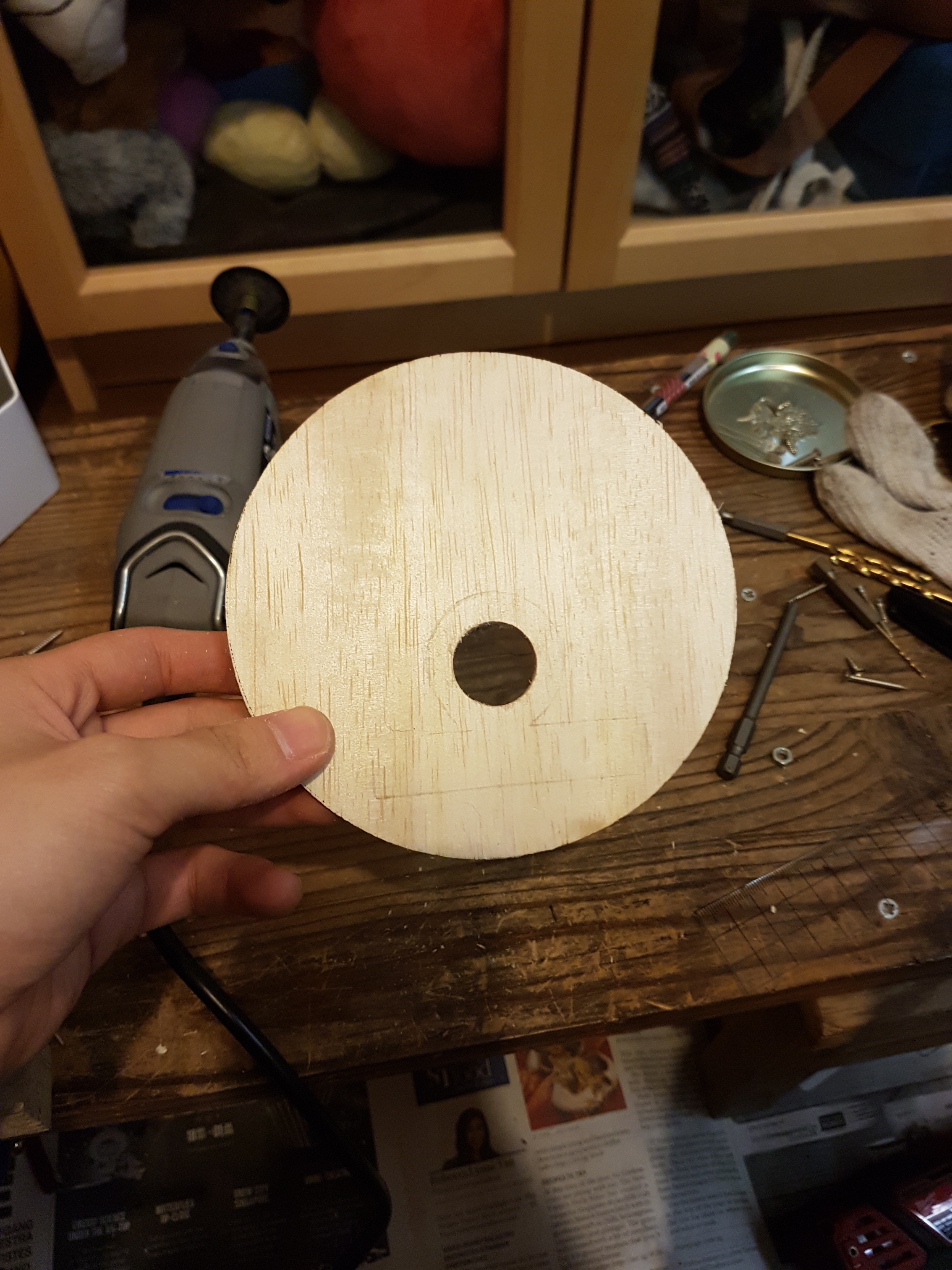 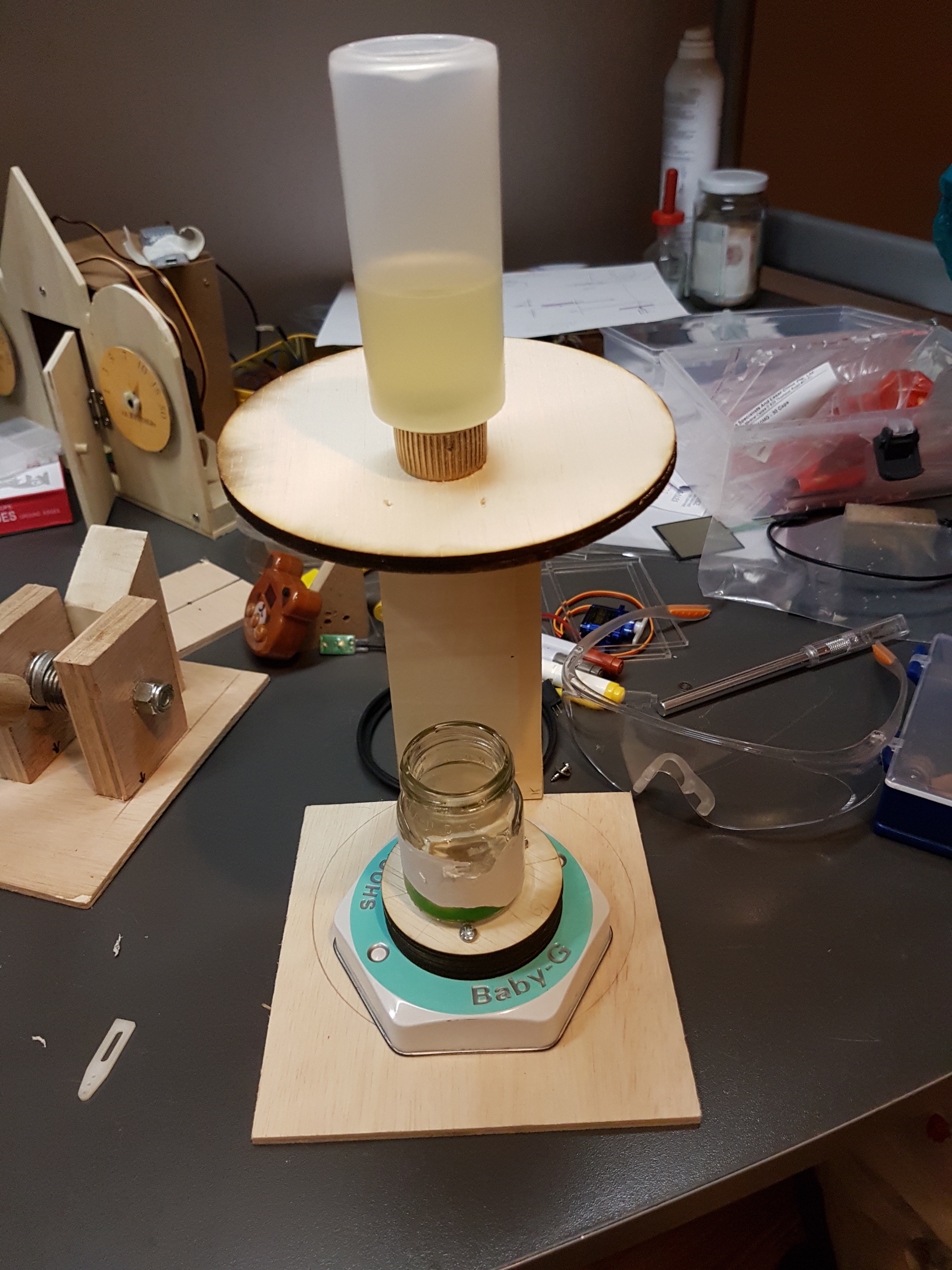 The base on which the jar is placed is designed to fit an LED bulb. Once the mixer is done with the emulsification, the bell will ring and the LED will light up simultaneously to direct the viewers to the final step of the process. Behold, a drop of clean, green biodiesel is dispensed!

I used siphons, hand pumps, nylon fittings and flexible plastic conduits to mimic brass pipes used in industrial machines. They were easy to paint and flexible, without adding unnecessary weight to the machine. These elements made the machine more realistic and contributed to the wacky invention aesthetic. They also helped soften the cuboid form. 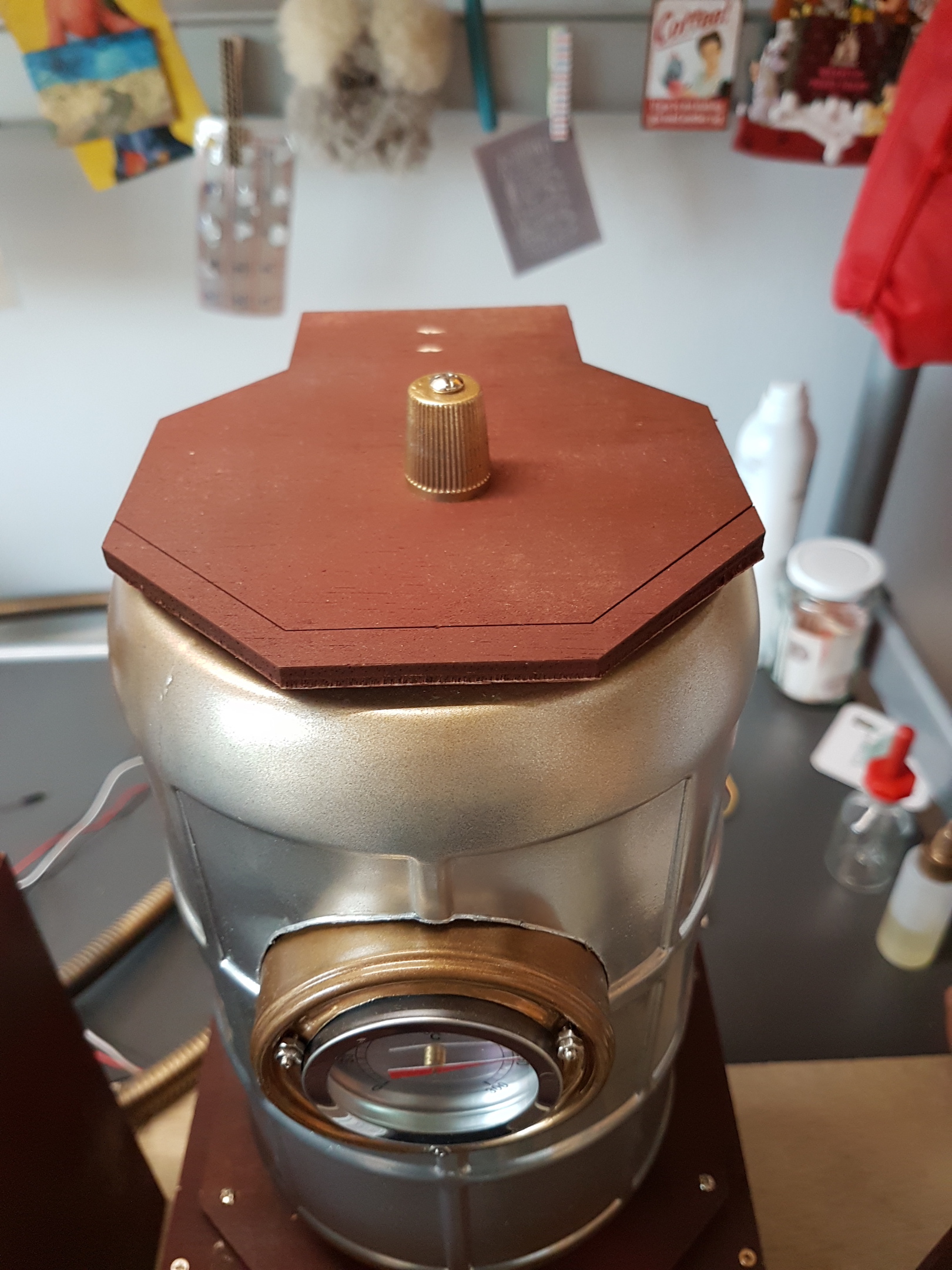 Based on the feedback received, it would be great if I could include more lights, movement or even olfactory feedback to guide the viewer throughout the process. I would also like to add variation in the number of drops depending on the amount of oil each person contributes for harvesting. Such details would enhance the illusion and further blur the line between reality and the ridiculous!