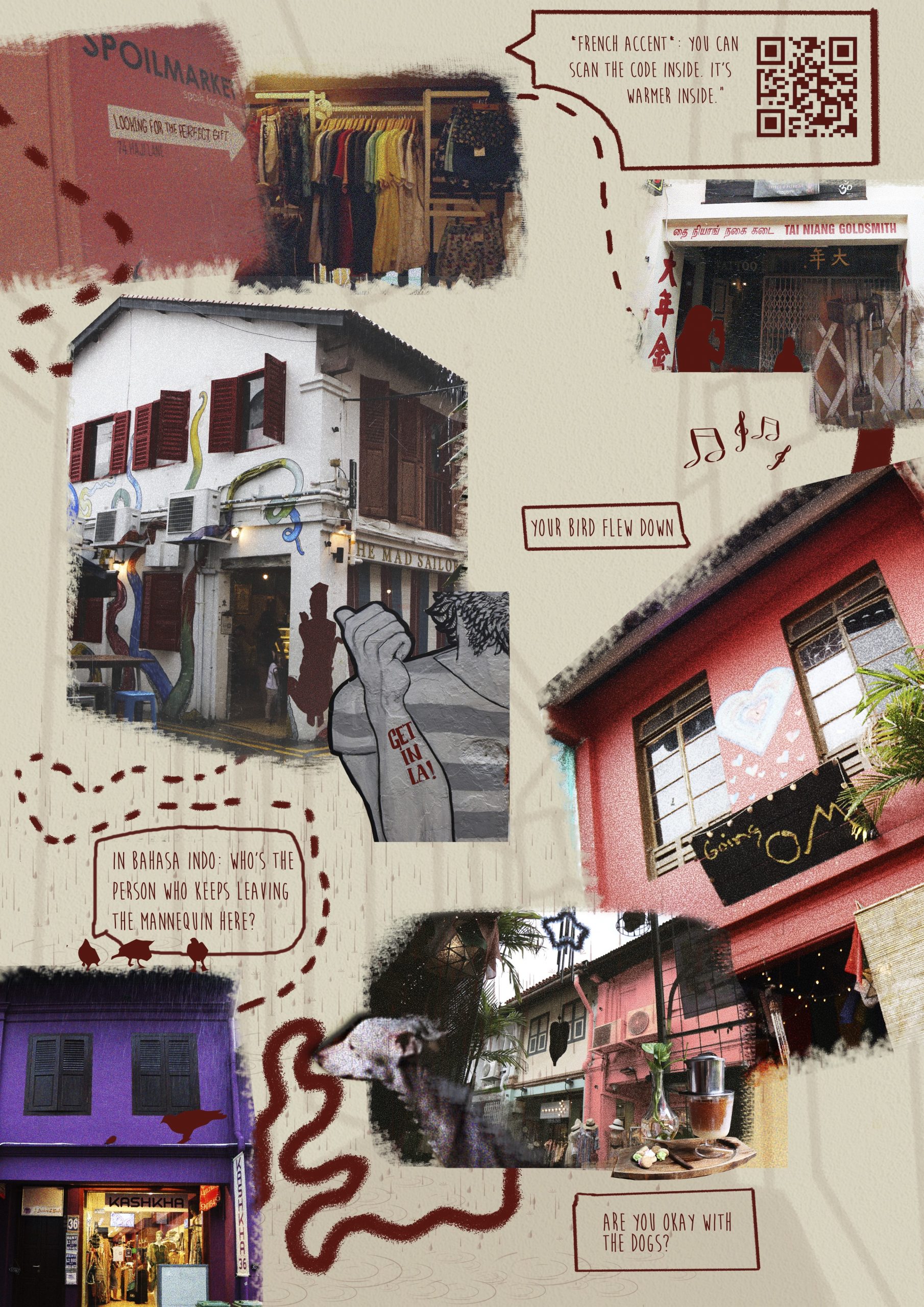 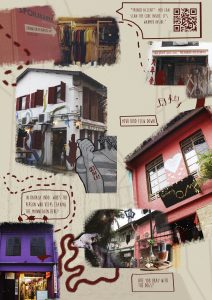 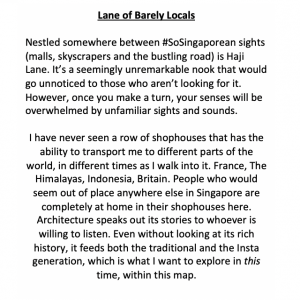 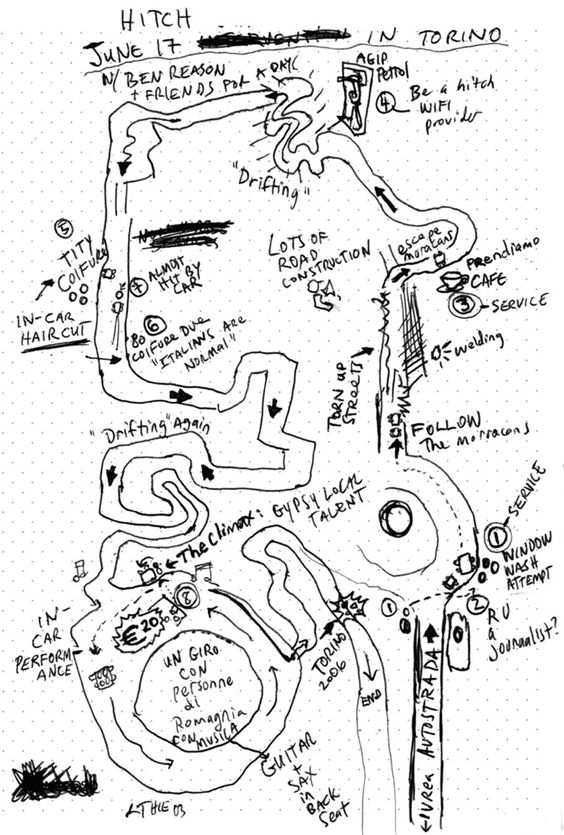 ^^ yo no hablo español but it’s okay, there’s english below.

Trying to understand Dérive a bit more, I read the readings sent to the Telegram group, did my own research and watched some YouTube videos of people taking part in their own dérive. Did it help? Yes. Was I still confused? Very. Why was I confused? I honestly don’t know. But I thought I gathered enough information for me to do this assignment so I went.

Having the prerequisite that Haji Lane is full of c o o l, hipster stuff, I wanted to let these people and the fun architecture guide me in this drifting exercise some way or another. Some challenges going in was the fear of being led by too much, or being overstimulated which would cause me to be confused by where I should go next and not pay attention to submerging myself in the environment I was in. Well… 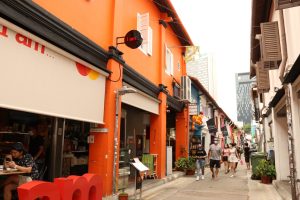 Overstimulated. Upon being overwhelmed within the first two seconds of this activity, I took a step back and looked at the other people and decided to be led by those who seem out of place within this row of “traditional” shophouses, the Instagrammers. Wherever they took a photo, I would go. I was also led by the sights and sounds which called out to me. Like a jerking thumb or loud Himalayan music. Even when it rained, I was still being drawn by the living things in the area, particularly the birds (for some reason, they all decided to seek shelter at this ONE shop…strange).

One thing I noticed about the place was that majority of the shops I went to, were specifically themed of different parts of the world. For example, Britain or the Himalayas. The people who owned these shops were as peculiar as their surroundings.

The visuals I captured were of the places I went to, the sights which honestly baffled me, and the icons that defined each place in my mind. I also gathered some really interesting soundbites from owners of these shophouses. The audio I gathered was also a form of guide to the things that I felt or were stimulated by. The sounds which controlled my thoughts, experience and perception of the space.

The map. Initially, I wanted the map to look like an old map with roads and funky illustrations of the place. Riding on that thought, the journey was defined not by the chronological route but by the significant points of which my senses were heightened as well as the things that led me there.

Again, I used colour to differentiate the elements in the map. The roads, soundbites and leads were all of the same colour because they were the things I had interacted with specifically in the place while the pictures itself represented the place itself. The lines and the routes represented my experience as well. When the road felt long and winding and uncomfortable, even though I could just be standing in the same spot irl, it would be illustrated by long and winding lines. If it was short and quick, the shorter lines. If I felt meh, dotted. If I felt overstimulated, bold. I didn’t include the legend because it meant many different things and could be seen many different ways to me.

For the audio, most of it was recorded audio. But OMG, I accidentally set the input volume to 6db instead of 0db like an idiot and didn’t realise it until the audio was wrangled. Noise reduction and DeHum was my best friend. Murphy’s Law. The final audio file is mostly diegetic and true to what I was hearing then. The only non-diegetic sounds were the mood music for between the locations to evoke the emotions I was experiencing so that my audience would not be confused by their own perception and emotions of the sounds in that space. Selfish, I know. I used the YouTube audio library for those.

For the audio, some caught the intention of the elements within the audio while for others, it missed the mark. A classmate commented on the continuity of the audio, suggesting the use of constant bpm or style to highlight the unity of the places I went to. Although the purpose of the music was not to highlight the unity of the places, I understood the importance of tying the mood music together so that it is better differentiated from the diegetic music. Maybe by using the same instruments, key, but not bpm though. Having it all have the same bpm would defeat the purpose of evoking different emotions.

The use of my lines. A few classmates commented on the use of the lines or “routes” I took. Why were some dotted and others thick and bold? They suggested the use of the legend to make things clearer for the audience. Which in hindsight, I should have used.

Some other comments were on the use of the unclear edges of the pictures, the furriness of the lines as well as the size of the dog.

The assignment allowed me to dive into my senses a little bit more than usual however, I was often still worried about the assignment more than I was enjoying the process. Which is unfortunate. Some things I would change would be to make my map a little less literal, using something else other than roads and lines. Maybe shapes or colours instead. Also, CHECK AUDIO LEVELS. Don’t trust the output. Throughout the process, I only checked if the input was the correct mic, not the audio level. Also, listening to the audio again, it ended abruptly too ;-; Would’ve sectioned it out and have the pace slow down a little earlier.