It’s the violence of video games based on war and the actual war these games are based off. What’s the relationship between the two? Why has the story or progression of every round in a first-person shooter game been set in this way? I wanted to draw parallels or comparisons between real-life world war 2 and these FPS games so many people play and explore how these FPS games have been influenced by war. War didn’t/doesn’t necessarily end when a bomb goes off or when everyone dies, so where do FPS games get this idea from? I picked these footages because they directly depict the scenarios FPS games take from.

description/justification of your technical decisions

I chose to cut my video in a way to make it seem that whatever is being said in the VO could have been said in a war but still drawing the line between real-life and video game. For example, when the player throws a flash bang grenade, so does the soldier that we see. I also tried to emphasise more on the pacing of the video as visually, the shots might seem similar to one another which decreases the visual interest which is why I chose other means to increase the impact or the visual value of them. 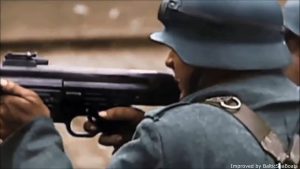 For example this shot in particular would require a bit more work because as compared to other clips, the saturation and contrast is completely off, it doesn’t help that the uniform is of a different colour too. So, I tried to tweak it such that it matches the previous shot and the next shot a little bit more before adding the overall filter over it.
 [ color matching/ saturation ] 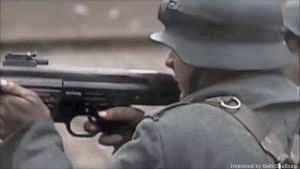 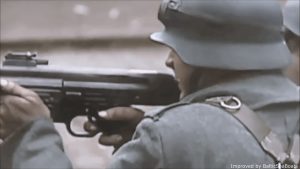 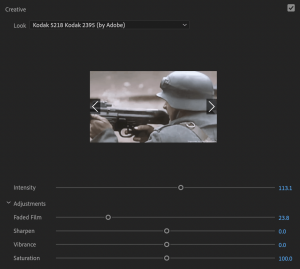 After adding the filter, it matches (sort of) the shots that are taken from different found footages so that it looked more coherent. Of course, it’s not the best, given more time I would’ve went more in-depth shot by shot to tweak the details like matching the greens of the trees, matching the colour of each soldier’s uniform, as well as the ground and sky (especially for all the outdoor shots).
 
  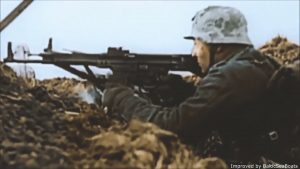 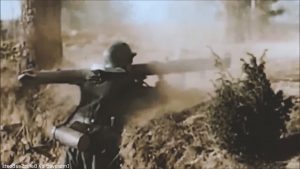 1. Atomic Bomb Wipes Out Hiroshima In A Matter Of Seconds _ Greatest Events of World War 2 – Discovery
Because war and violence can be quite sensitive, I referred to the videos regarding war from more mainstream channels instead of private or personal channels as I personally felt it to be more respectful of the soldiers and the victims. For example, not depicting any death of any particular soldier specifically and as much as possible, not show their faces for prolonged periods of time. The way in which they edited the narrative was interesting too, there was a progression from getting ready to enter the battlefield, entering the battlefield, charging in, (interview of expert explaining), the big destruction, and the consequences of war. I tried to follow this narrative/progression as well.

2. “High School Musical: A Bad Lip Reading.” – Bad Lip Reading
The treatment of my work is rather different from this reference but it was born of the same method of dubbing/placing a voice that fit but wasn’t there in the first place. It was this video that inspired me to do something of the same nature but instead of doing something humorous, I wanted to try making something a bit more serious or sensitive.

3. Counter Strike: Global Offensive
The VO is directly referenced from a normal CSGO match. When I watch competitive Counter Strike or when I play it myself, the things that are said in the VO, I guarantee, you’ll hear at least once in every map/game. The script of the VO is very tightly based on Counter Strike: Global Offensive because firstly, it’s familiar to me and to many other people who might not play FPS games but still know the mechanics. The mechanics of the game can be quite straightforward which is what I needed especially when comparing the round progression to something familiar to everyone which is world war 2 battlegrounds/ground zero.

Terrorist 1: Eh, do you have enough money for an AWP?

Terrorist 2: Will you drop me something?

1: Just use a pistol la! Gun or pistol, you’ll still die within a few seconds.

Okay, I think the guy at A is really, really good so-

1: What? You hear something?

You said “don’t have” but really have!

Yeah, okay, the bomb is ticking.

World War 2 soldiers run into the battlegrounds with guns at the ready and strategies in their heads. Their crosshairs are hungry for enemy heads. They work together, fearless of impending death, to destroy enemy grounds and detonate a bomb and win the game.