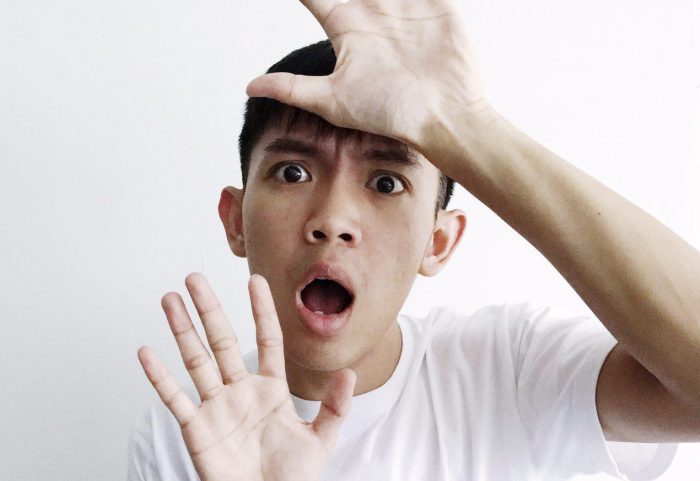 Me & Myself is a fictional story about Sylvester being stuck inside his phone out of the sudden and how he started to interact with him (mirrored ego who’s in the real world) across different space. Desperately wanted to get out of the phone, sylvester tried to sabotage him’s relationship with his girlfriend in order to get his attention, not realising that he was sabotaging his own relationship as well. After the girlfriend decided to broke up with him, he fell into a depression state. Sylvester felt really bad and tried to cheer him up but to no valid. Him accidentally spoiled the phone in the end and thought it was best to go back to sleep so that he can end the bad day. Out of the sudden, the phone started to work again. The story ended with him receiving a text from the girlfriend and Sylvester appears again…

So what is reality?

This story was inspired by my own bad experience with my mobile phone which has spoiled on me for a few occasions. It made me realised how I couldn’t live without my phone and have gradually become a phone slave. Hence, I came out with this idea of being trapped inside a mobile phone, and show how obsession with mobile phone can ruin my life.

I wanted to insert a bit of my personality into this photo montage, hence you will see a lot of exaggerated facial expression to give a comedy feel. I did not reference to any movies or artist and decided to kept it really simple to bring out the storyline instead. Hence, you guys will realised there are a lot of moment-to-moment, action-to-action transitions and a few scene-to-scene to bring the across space from home to ice cream shop and then back to home.

To make the story interesting, I decided to not fall into the wake-up-and-it-was-just-a-dream kind of story, but instead, I decided not to bring the main character out of the mobile phone so that it will allow the audience to form their own conclusion. I thought it was a huge risk to take because the audience will end up being confused by the ending. I also wanted to highlight on how even though I know it was bad for me, I still continued to be dependant on my phone.

It was a really fun assignment to make! I struggled a little bit during the start of this assignment to think of a story. I thought it must be really magical and abstract since we could use any medium for this assignment. I went for the simple approach in the end and decided to apply what I have learnt during 4D class. I spend quite awhile to plan every single frame because there are 2 different space: the real world and the virtual world. I have to first take a series of photo with white background and then uploaded them to my mobile phone before I could start shooting for there scene. It was really confusing for me and I have to retake a number of shots so that the story flows well. but overall I’m quite pleased with the end results 🙂 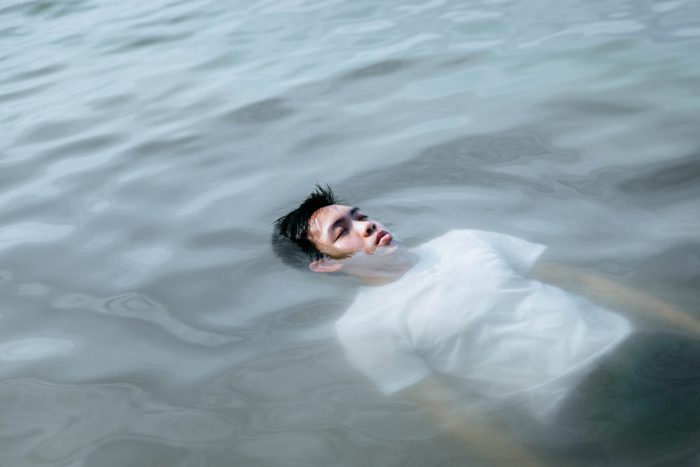 This assignment gave me an opportunity to use series of pictures to show the other side of me that has always been hidden behind the mask. Through this assignment, I want to create a very huge contrast between how people perceived me as and who I really am.

I grew up in a very traditional Chinese family, where religion and traditions plays an important part of our lives. Being a typical “Gen X” who seeks to fit into the modern society, I, a self-proclaimed freethinker and individualist have never once allowed myself to be conformed by religion and traditions. So, how do I balance between tradition and modernisation? 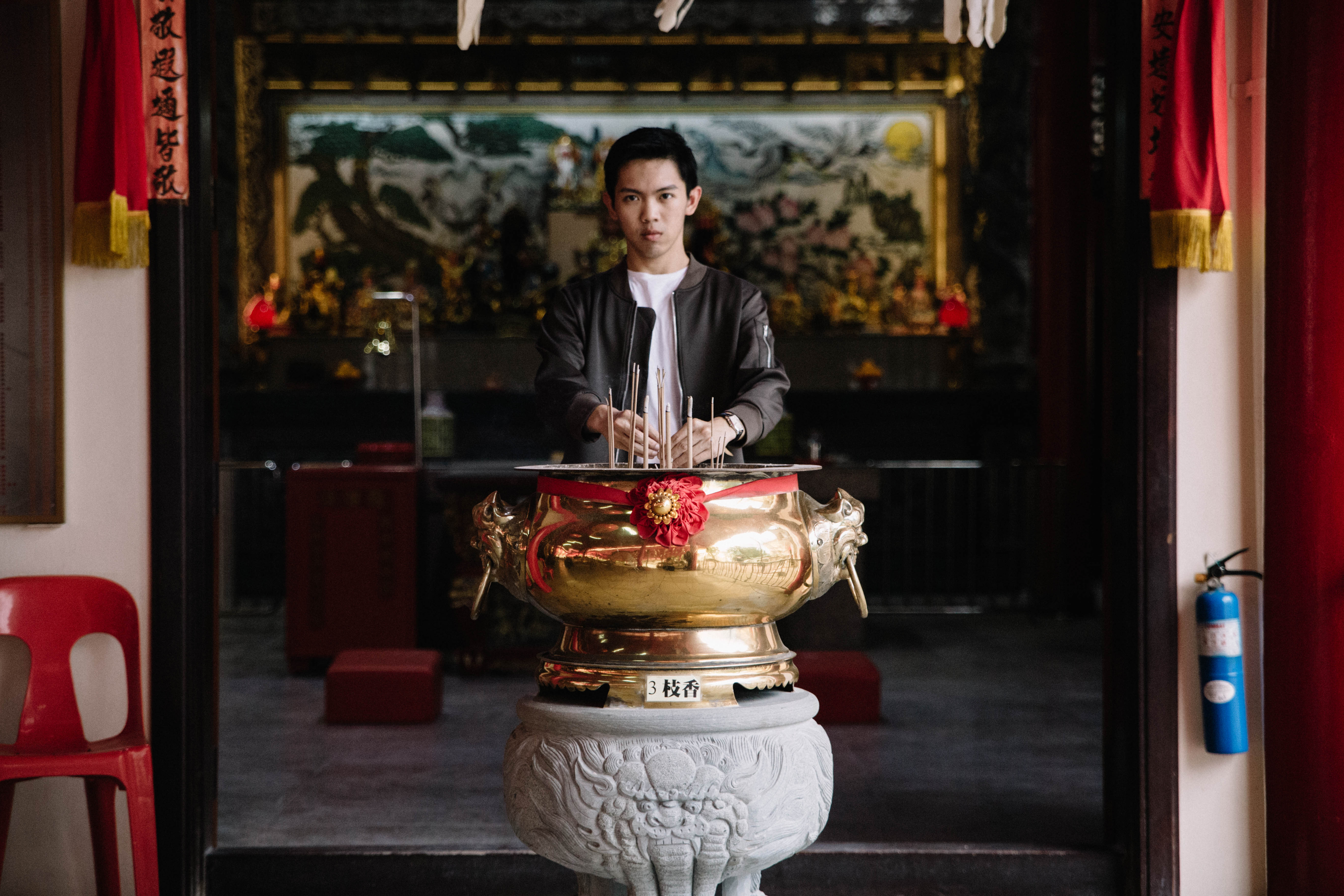 The photo above was taken in a temple that I have always visited since young. To show the rebellious side of me rejecting my roots and welcoming the new, I was back facing the statue of gods that people worship towards. It was accompanied by my “uninterested” facial expression and deliberated set of clothing that I wore to bring out the contrast between my traditional background and the modern influence that is embedded on me. I also want to show how my culture has shaped me as a person, hence I strategically used two hands to put the joysticks to signify that even though I tried my best to oppose conservative ideas, it still runs in my blood. 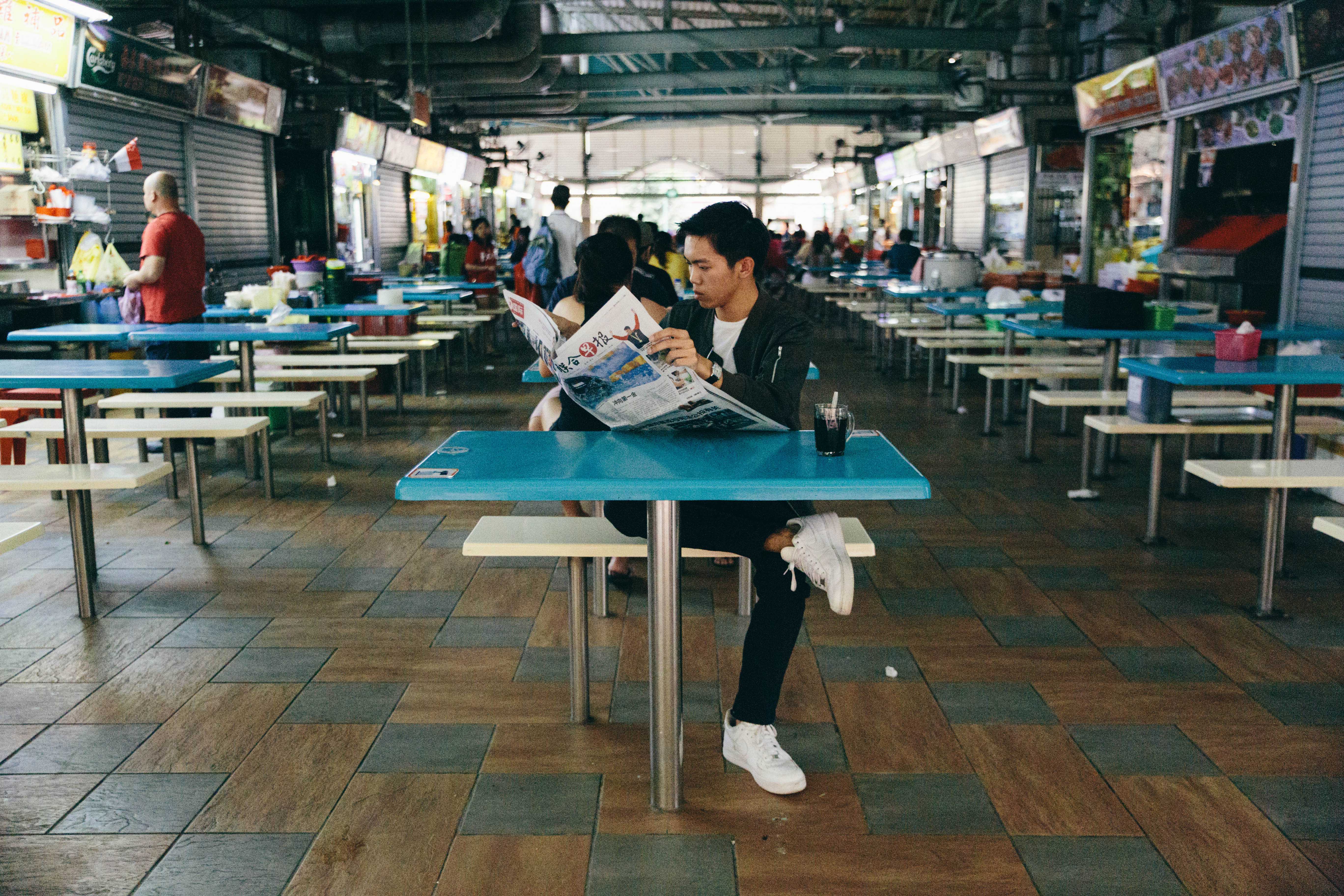 Hence it leads to the second photo of myself, wearing the same set of modern clothes in a tradition hawker food market doing what most typical local Singaporeans do – “Lim Kopi” and read Chinese newspaper. It shows how I, a typical gen-x embrace traditions eventually. 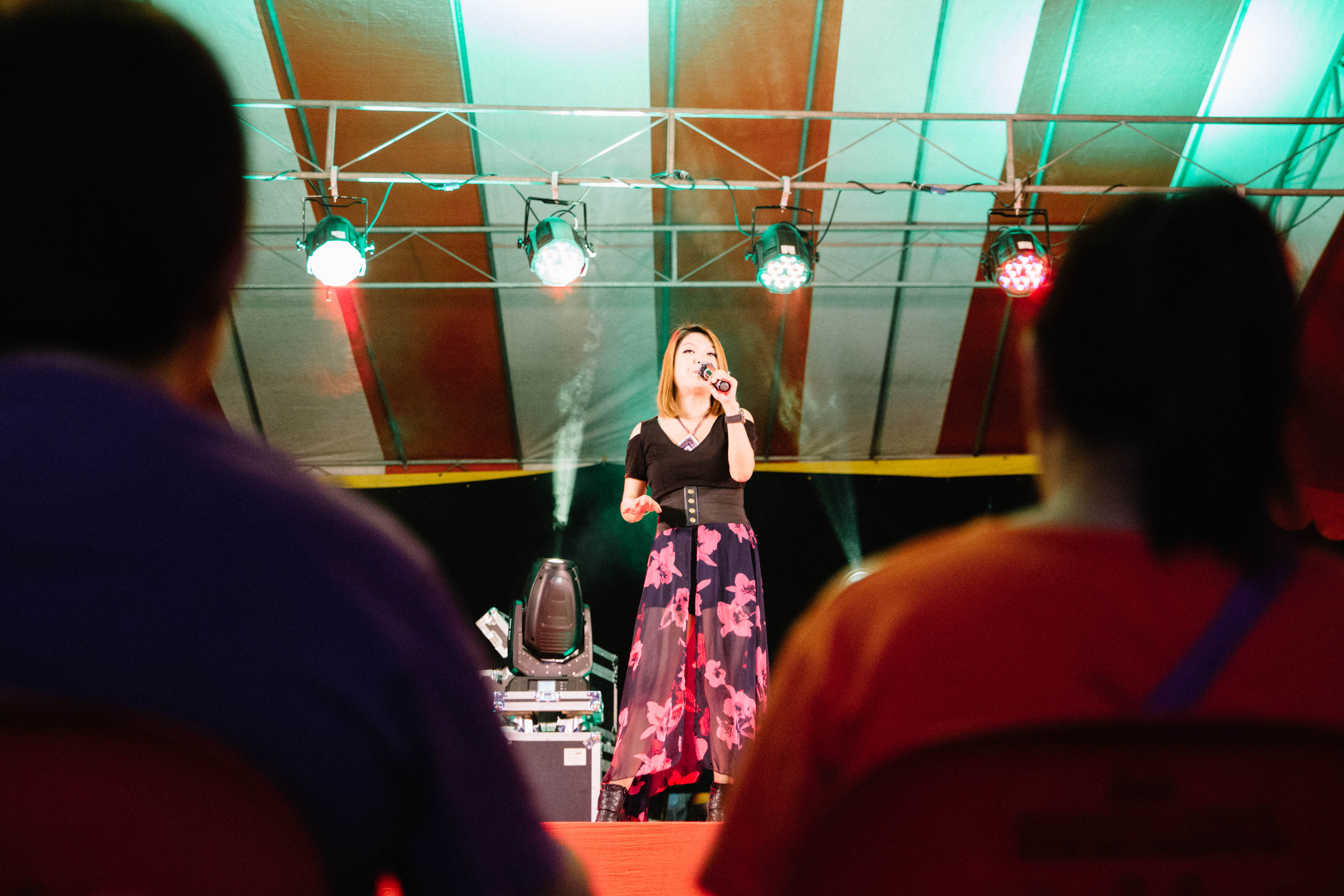 The last photo of Part I was taken during the 7th month ghost festival, where there were performances out there. That was my sister on stage and I chose to take it in bottom up view because I want to show the kind of view I had of my sister performing when I was young. This photo shows the kind of environment I was brought up in, that involves both Chinese religion and local art.

Lei pointed out that this set of photos reminded her of Royston Tan’s work. I kind of understand why she felt that way. Royston Tan always focuses on the uniquely Singaporean human interest stories or tales about the community and my photos has a hint of his “881” film – very localised and nostalgic. I am a big fan of his work and maybe I might have referenced his work subconsciously.

Part II: Object and Representation of Self

The last photo of Part 1 that talks about performing art kind of flows through part II which shows the relationship I have with music and musical instruments. Music has always been a big part of my life. I play a few musical instruments such as Piano, Guitar and a few other Chinese instrument (I was in Chinese Orchestra in high school). I choose guitar as my object because it has been with me for years even though I don’t really play it well. Also, my Piano was destroyed due to personal reason. So I feel that I have been keeping the guitar subconsciously for a reason and maybe because I can’t live without music.

The 3 photos below show me interacting with my guitar in different ways, often exaggerated. The first photo was me sleeping with my guitar. I thought it really brings out the relationship I have with music, and it shows how I can’t live without them. The second photo depicts a happy moment I have with music while jamming alone at home. Lastly, a very exaggerated way to interacting with guitar – playing it while I was in a toilet. When I show my friends this photo, their first reaction was to laugh even though it gives a very calm, B&W tone to it. I think it’s because of the exaggeration. However, I want to make a statement that music is part of my life, hence it’s normal to me. 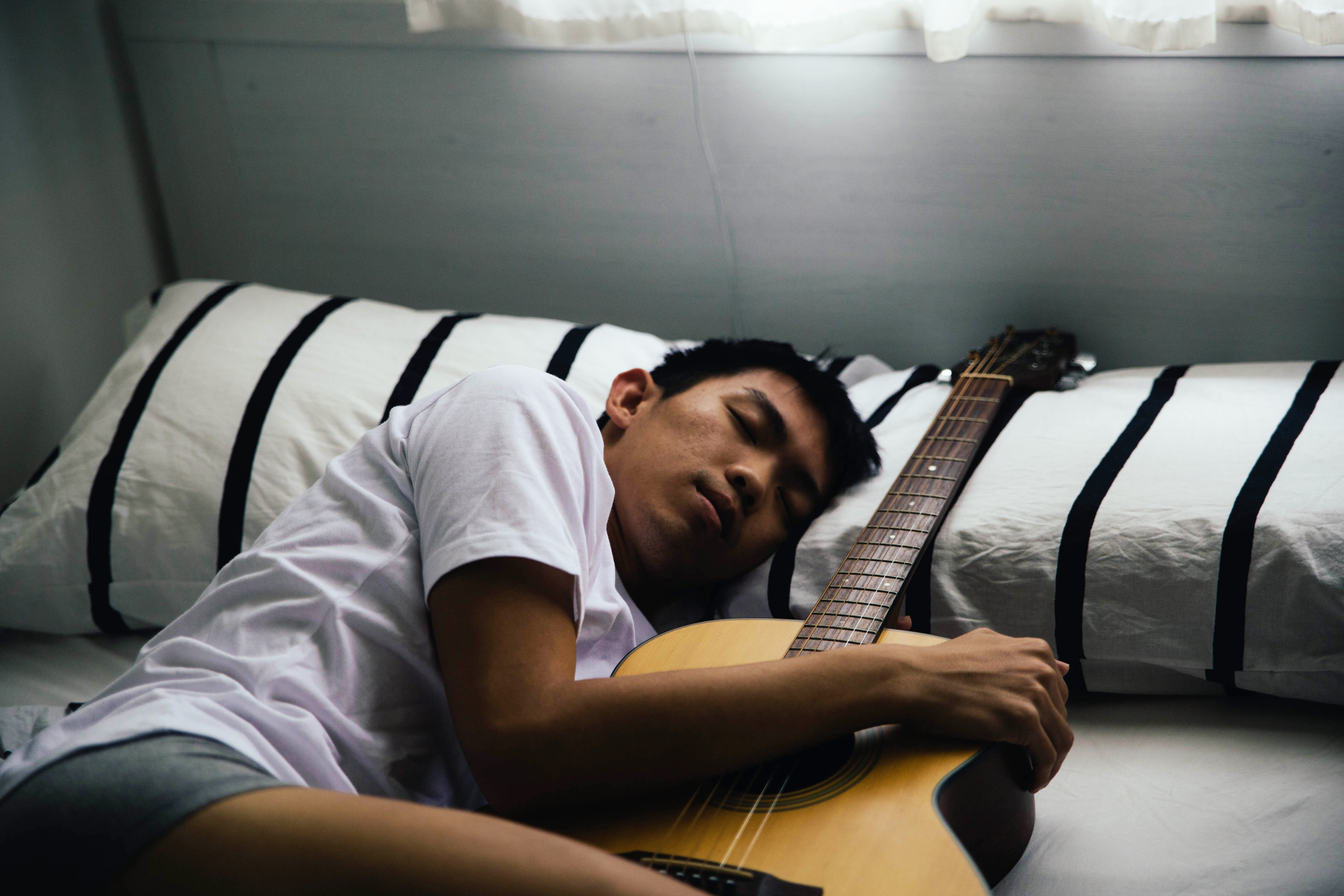 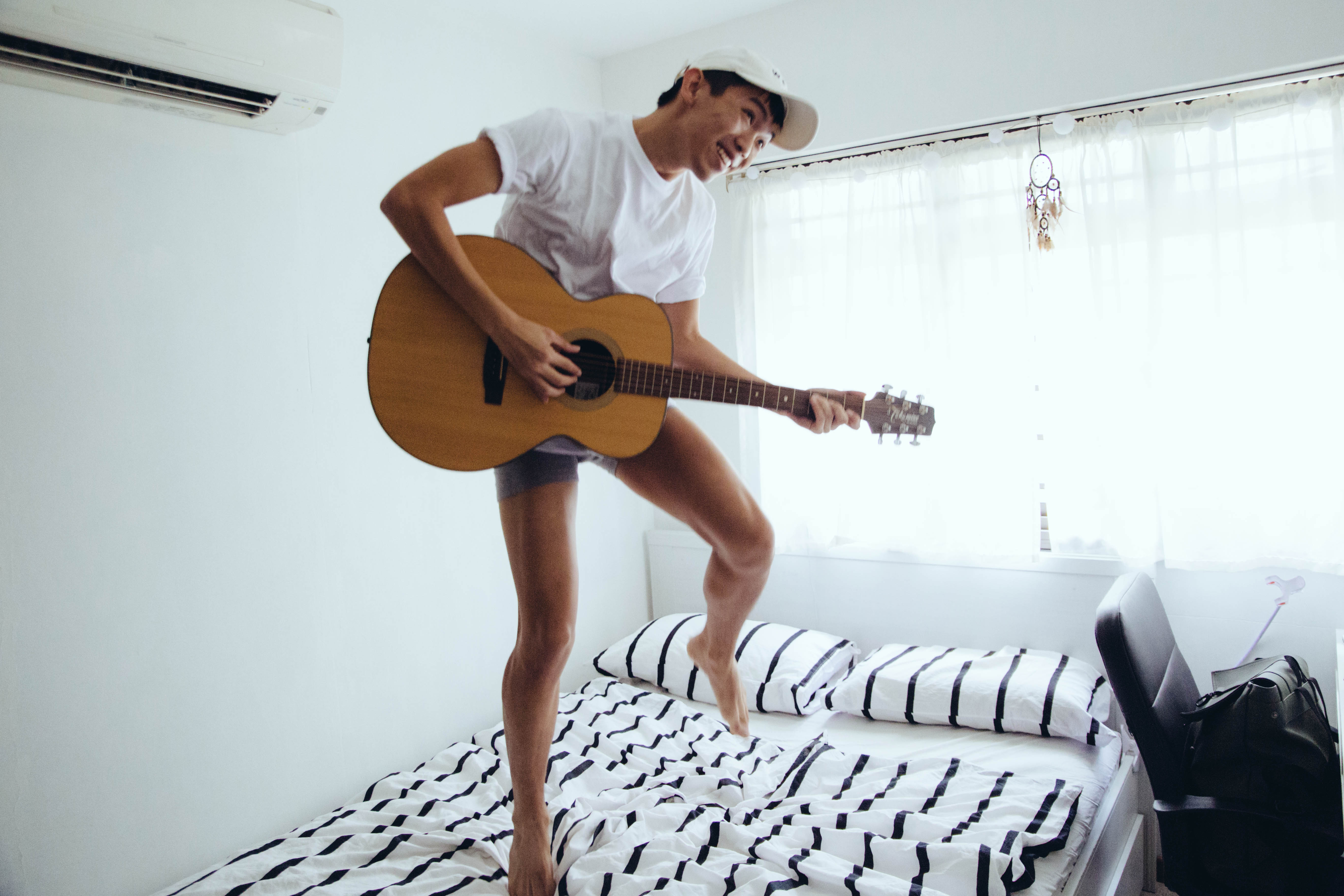 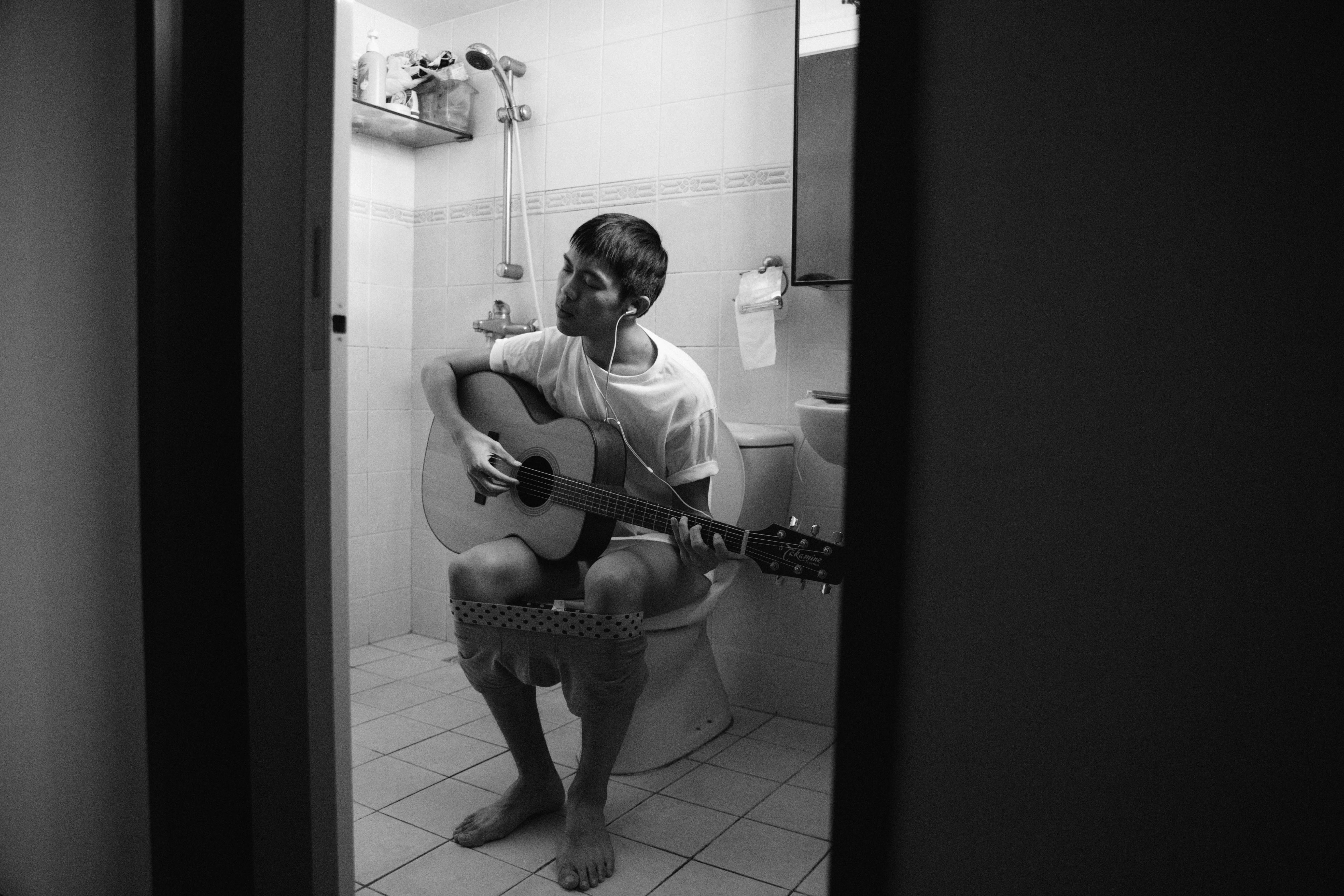 I chose Pasir Ris Park as the location because I spent most of my childhood there with my dad. Unfortunately, he has passed on 2 years ago and since then I have never visited that place. My relationship with my dad was kind of drifted off since I was 14 years old, so this set of photos really meant a lot to me. 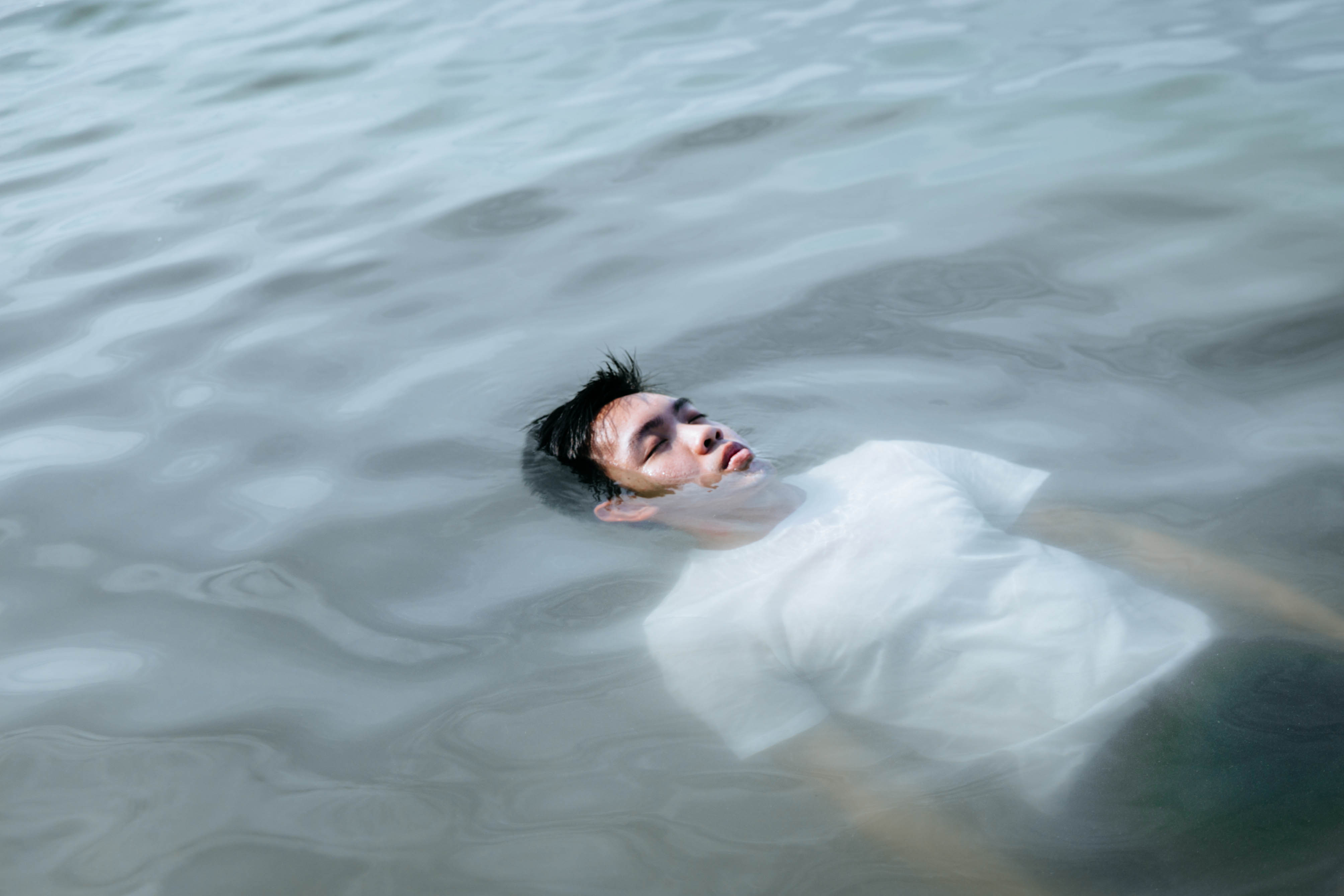 I started off with the photo above. I named it “A Sea of Memories”. This was taken in pasir ris park and I wanted to show that I was “flowing” back to the memories I had with my dad. 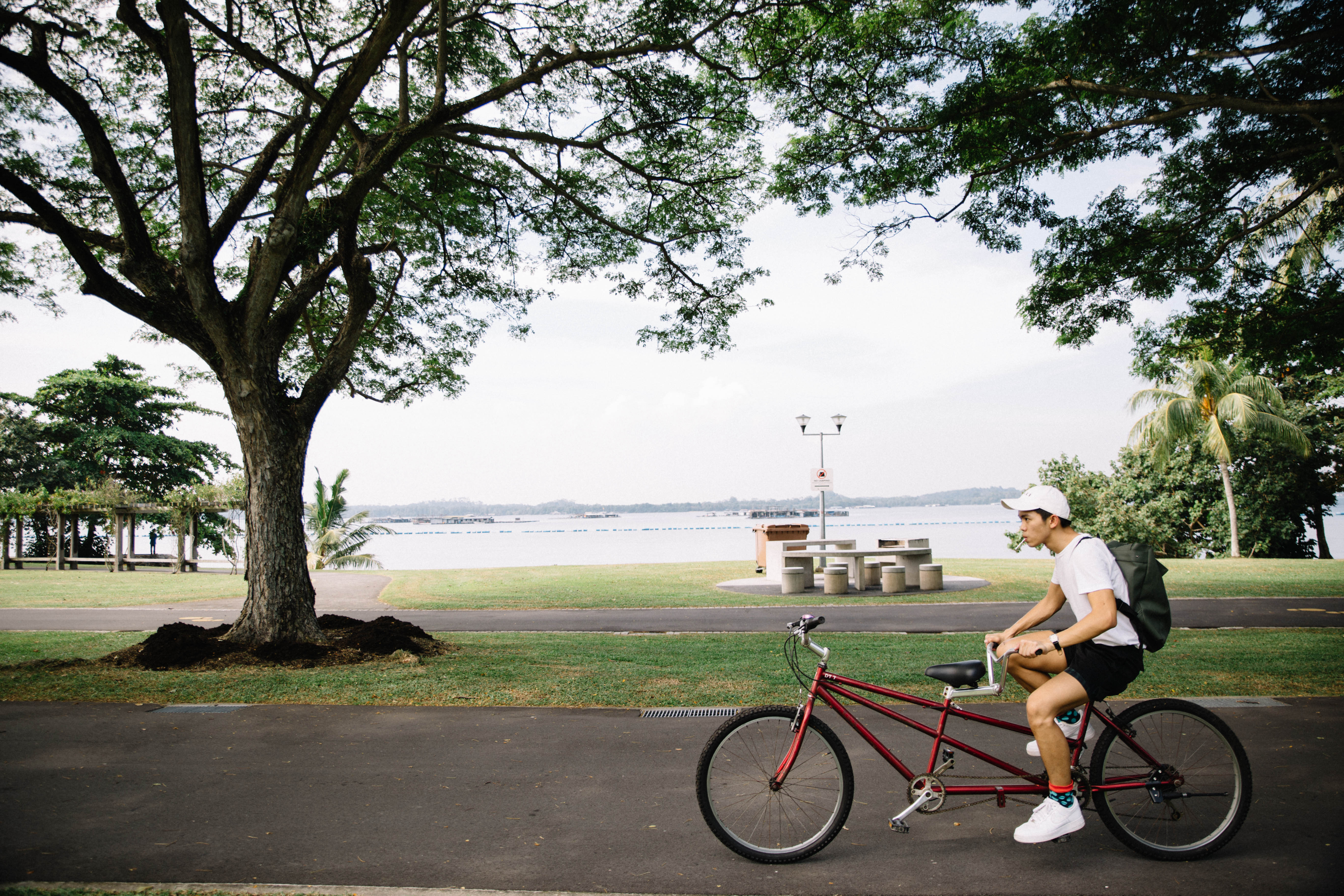 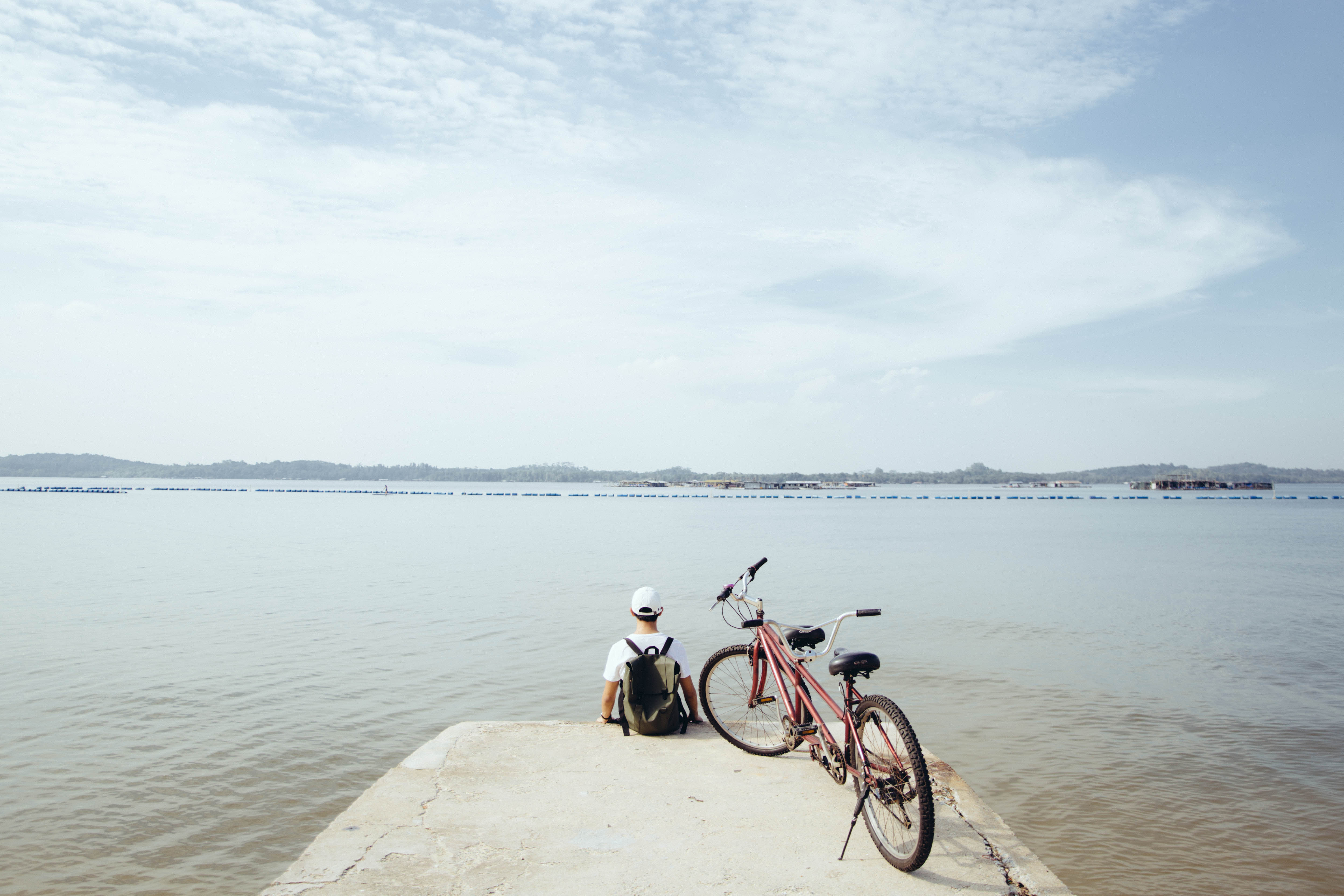 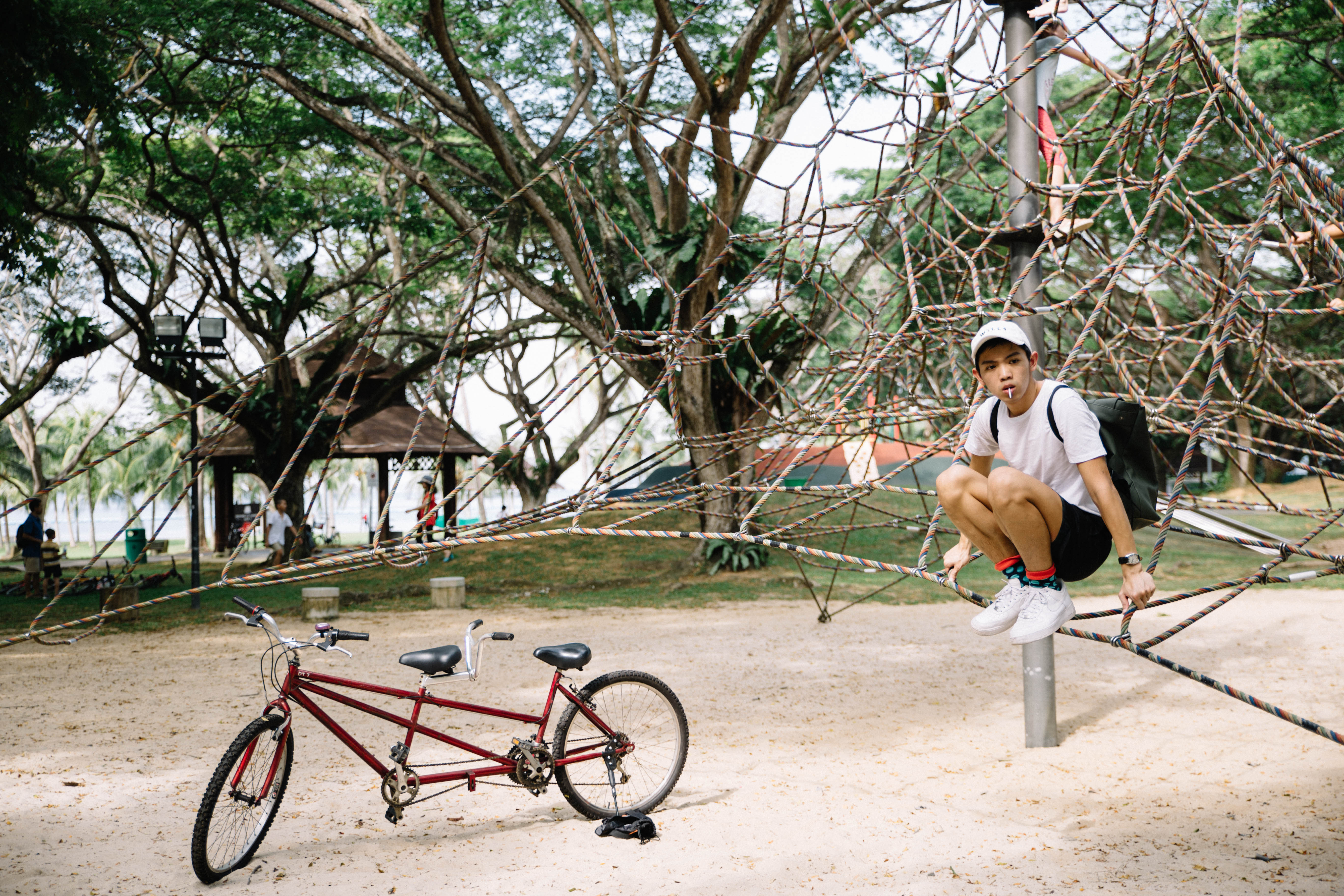 I placed the 2 passengers bicycle in the 3 photos above as a signifier to signify the absence of my dad. The photo of me seating at the back seat really brings out the absence of him, because usually there will be passenger in front to control the bike (My dad always took the front seat). I was also kind of inspired by Cindy Sherman to dress up as a character. I tried to achieve the kiddy look by wearing T-shirt tucked in my shorts, colourful socks and lollipop in my mouth.

Final Documentation of Photos on the Wall 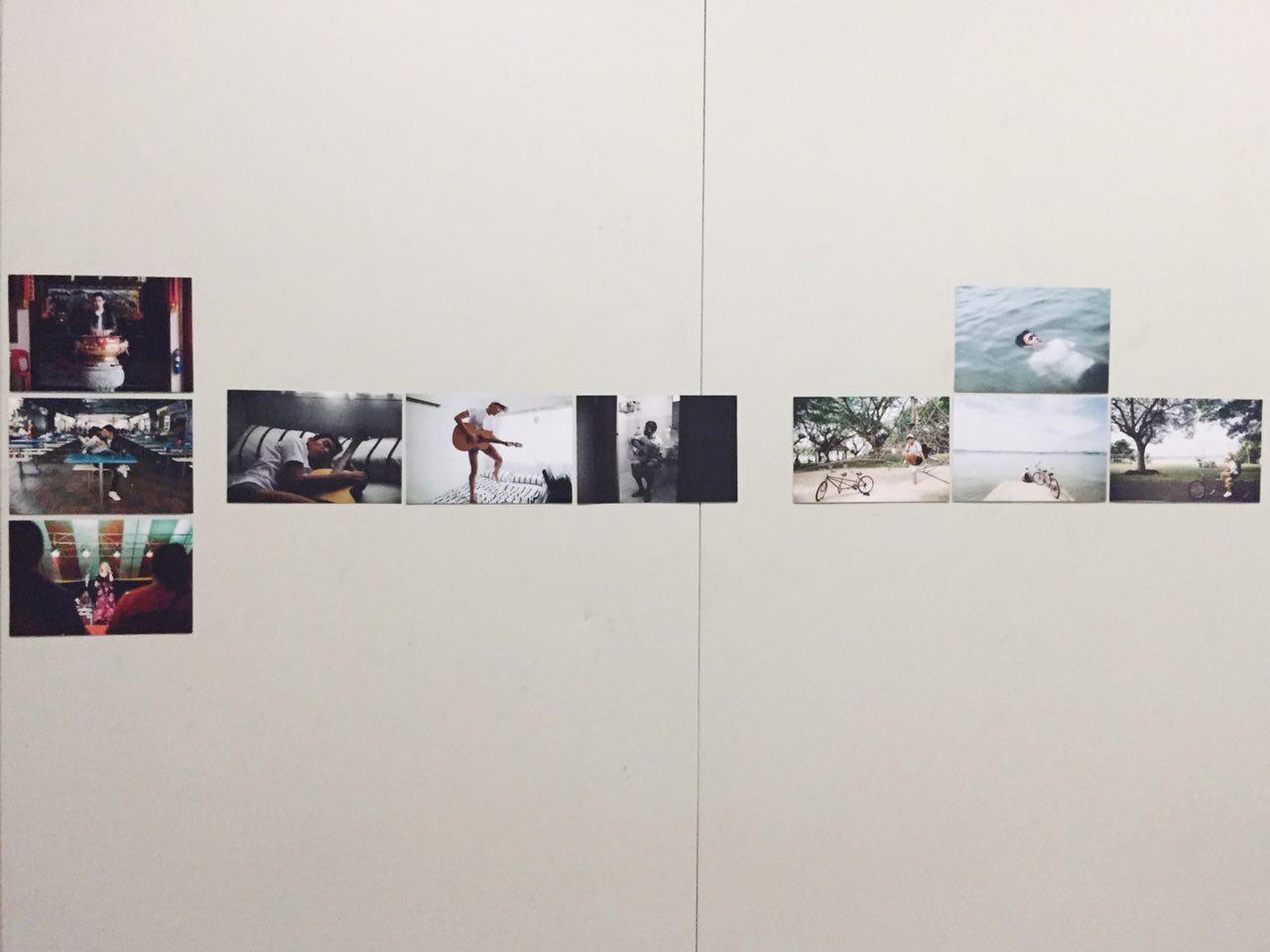 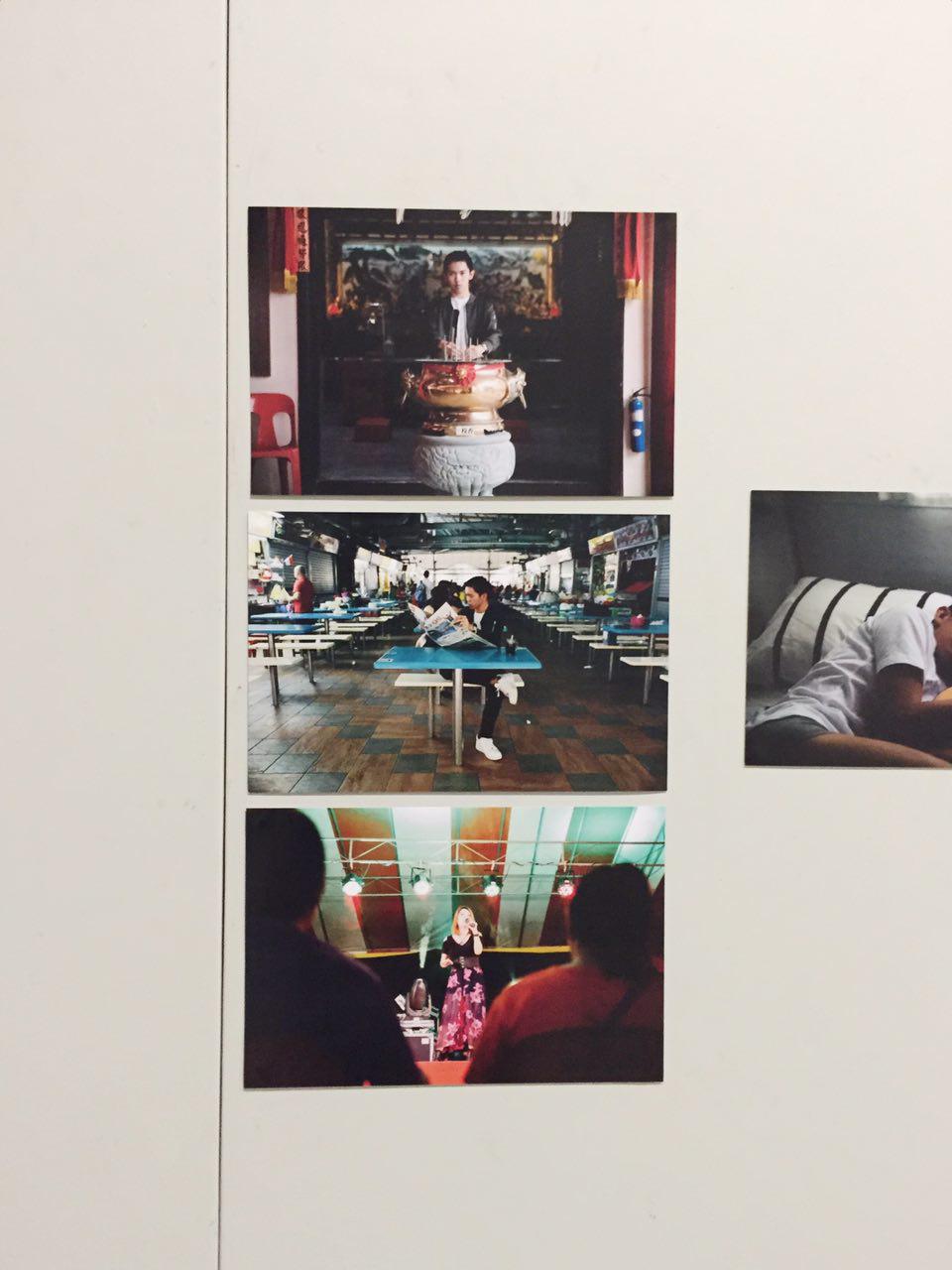 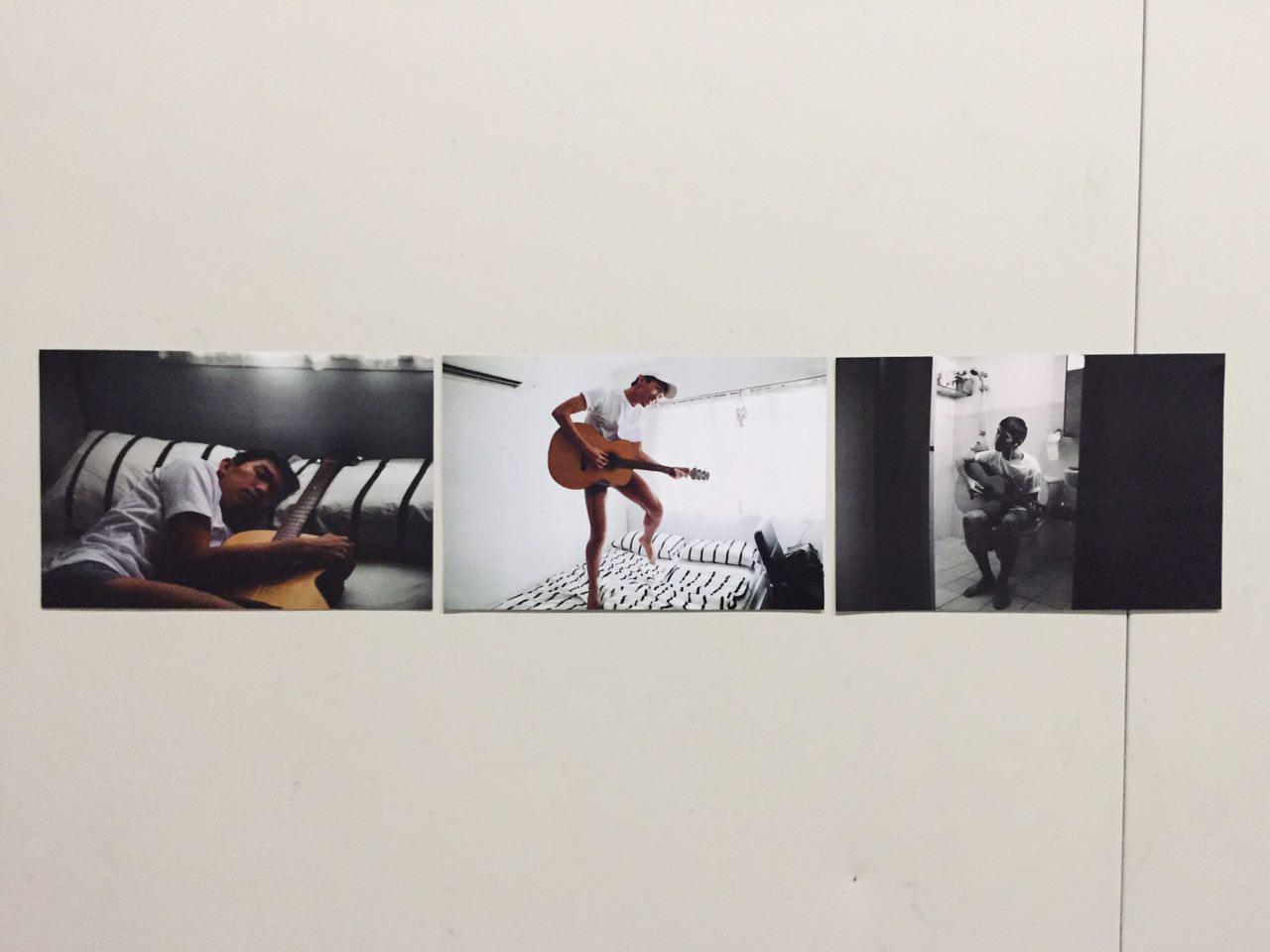 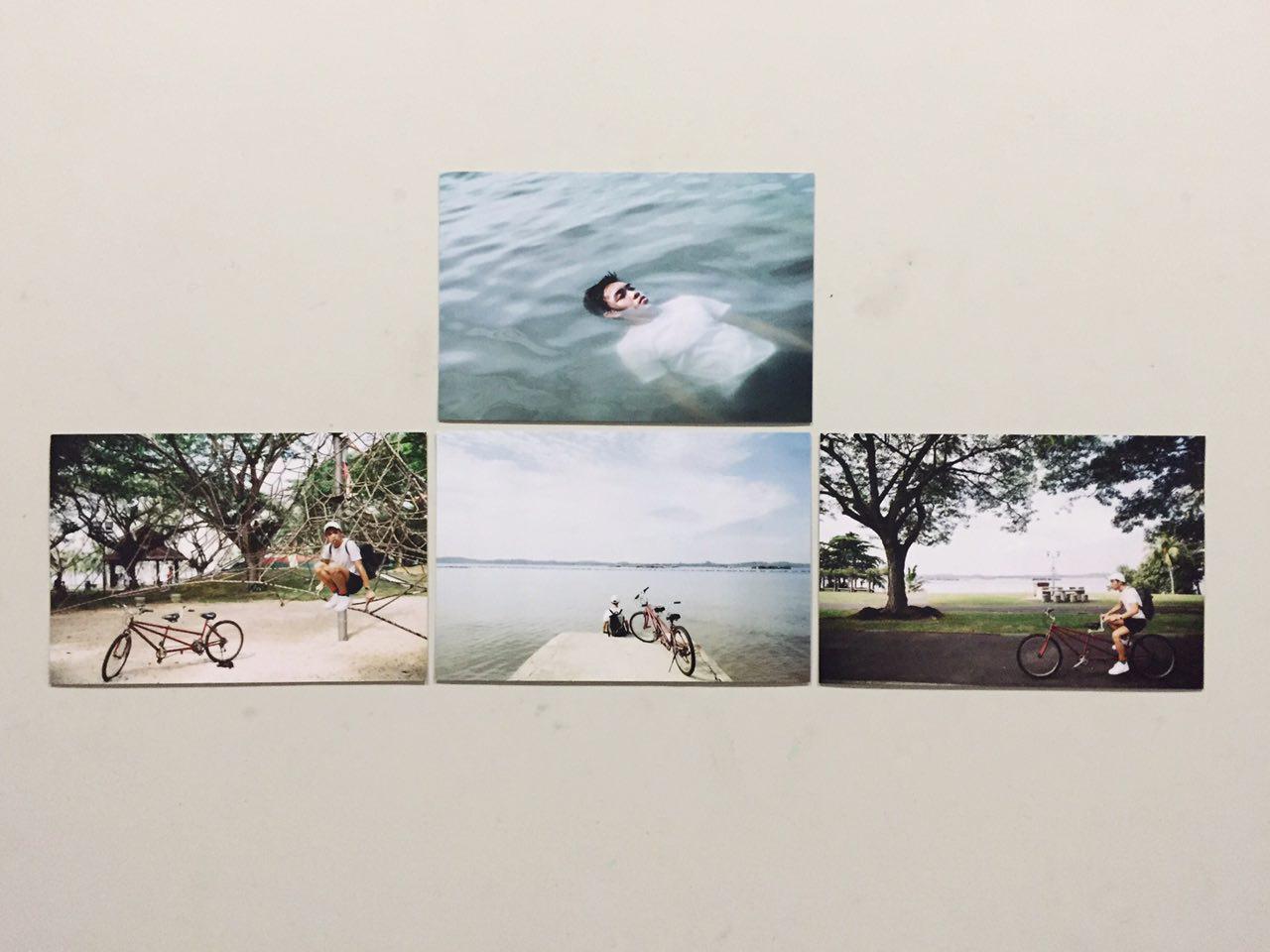