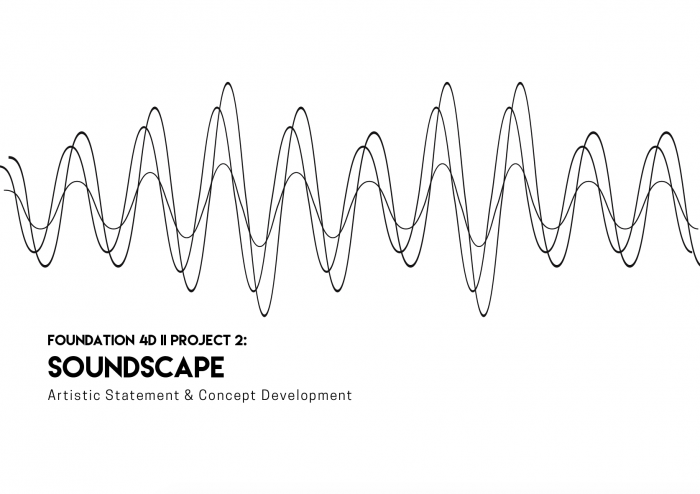 This soundscape is about a student who encountered paranormal activity in his school toilet. Through objective sound we follow the character through different spaces which allows the audience to experience from the character’s point of view. Through this soundscape, you will hear how the character first encounter the female spirit in a toilet; how he manage to get out from the toilet but was locked inside the fire escape exit while the spirit approaches him; and finally manage to get out from the building.

Firstly, I came out with a few scenarios/emotions that I want to portray in this soundscape project:

I decided to work on number 2 because It’s something I have never experienced before. I also wanted to try create horror sound that evokes fear and it has more room for me to play around with sound layering.

I also interviewed my mum and my partner for some inspiration. My mum actually experience paranormal activity in kampong when she was a teenager. She heard vividly heard someone talking in a low, out of this world language while she was on the way back home late at night, and saw a very tall and slender dark figures in the forest.

James Wan
He is well known for directing the horror film such as Insidious, The Conjuring and Insidious: Chapter 2 and The Conjuring 2. I have been a huge fan of his horror film and always wondered why his film evokes so much fear. I realised that he uses a lot unexpected surprise jump-scare with loud noises. He especially like to have a long suspense or silence before the loud sound take place at the unexpected and synchronised nicely with the frame. Here are some videos that I refer to:

James Wan on Sound and Suspense:

I also came out with a rough script and planning to get a clear picture of how my soundscape would sound like:

During the recording process, I made some changes to the script. I added in/took out some elements so that it sound cohesive and balance. Here are the list of sounds that I recorded: 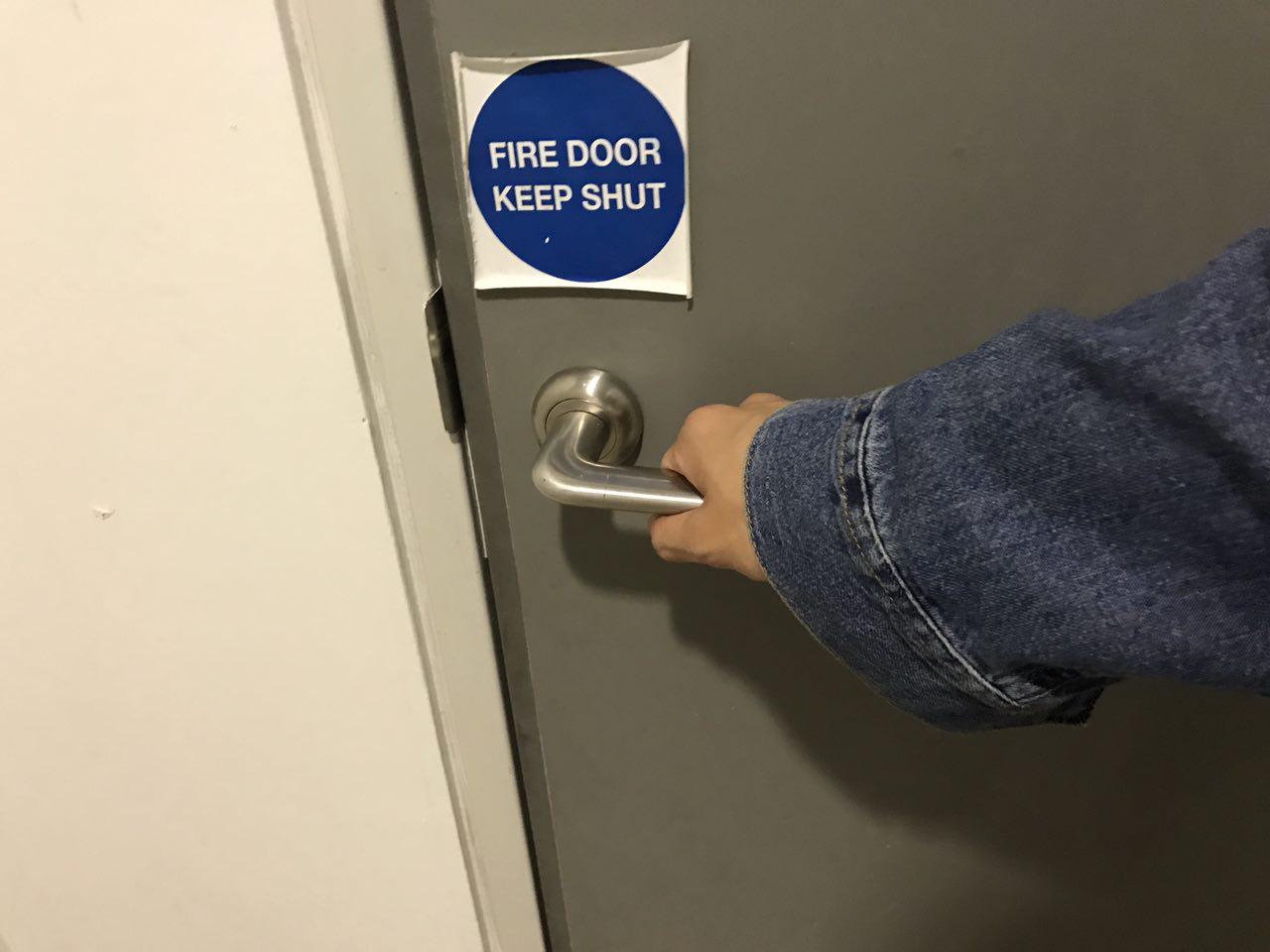 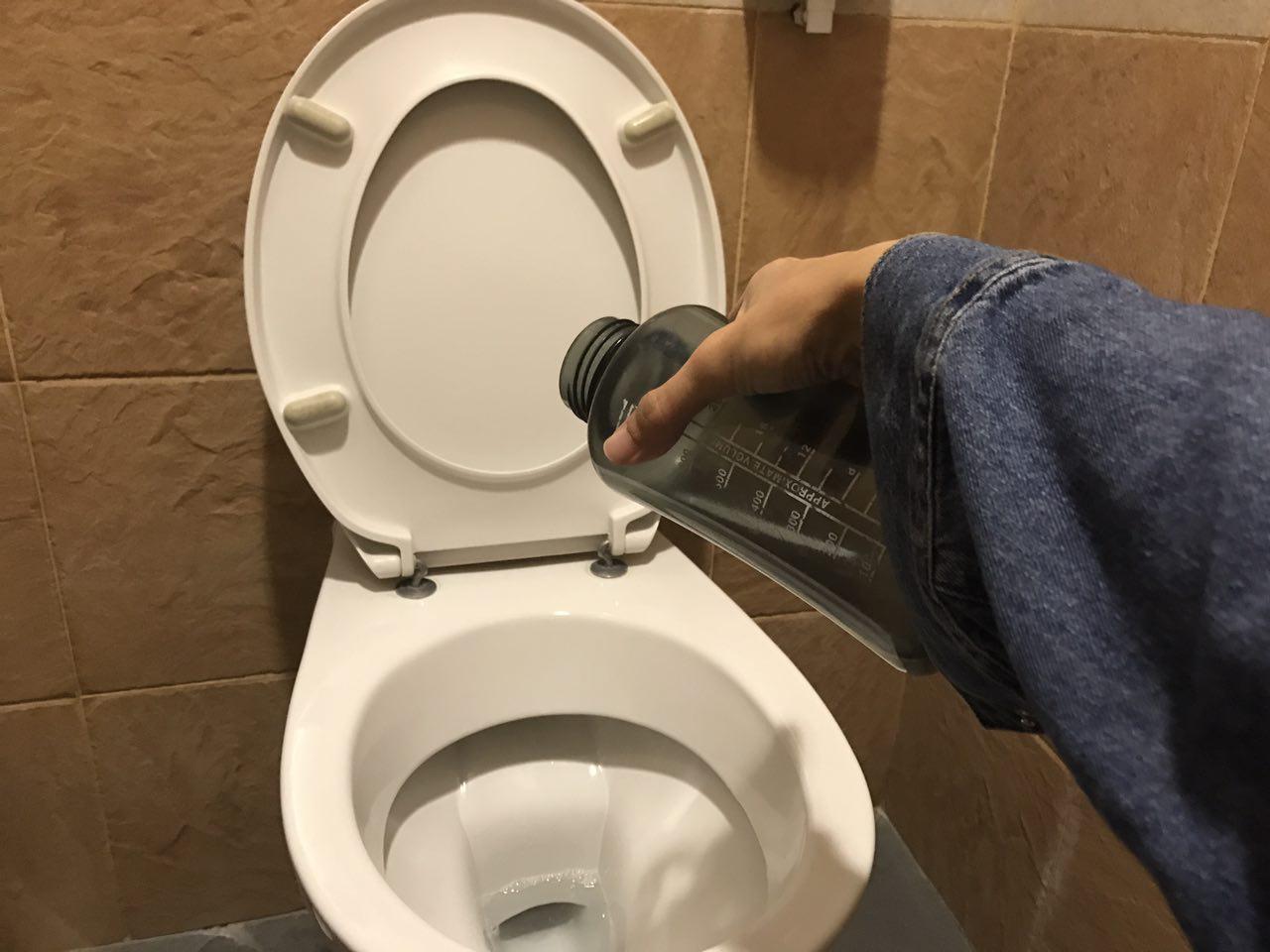 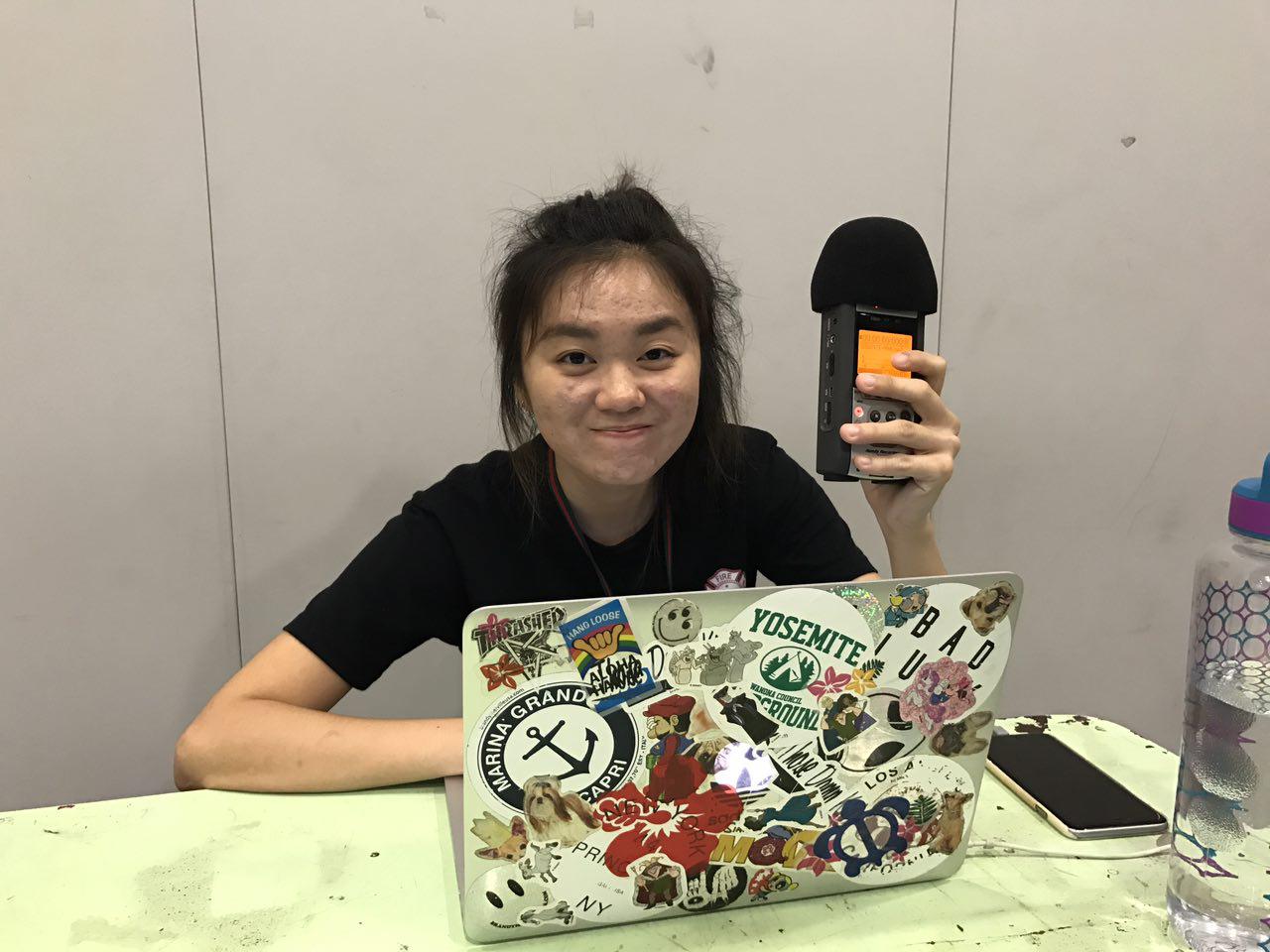 I wanted the soundscape to have mostly Objective Sound that captures everything that’s going on in the space and also to have a story structure – increase in intensity (from soft to loud). The soundscape starts off soft and light-hearted to loud and creepy towards the end. To further enhance the intensity I planned to include a change in timbre and organisation, from tonal to noisy and from ordered to chaotic respectively by layering more sound clips towards the end. Also, I want to include the sound of  heartbeats to change the speed and rhythm of the soundscape.

P/S: First time using Adobe Audition for sound editing and it was more challenging that I thought it would be. As a performance artist, Sylvester sees his life as part of the performance on stage. He is a cheerful and positive person, but after knowing that he has diagnosed with 4th stage cancer he struggled to accept his destiny. During his performance, Sylvester failed to put up his cheerful front and break down on stage as he knew that one day he will not be able to perform again and soon he will be faded off from this world and leave everything he loves behind…

During class, we were tasked to explore different characters we have affinity with:

Task 3 – List five people you know or have known

Alan Turing was an English pioneer computer scientist and cryptanalyst who invented computer to break Germany’s unbreakable Enigma machine and helped UK to win WWII. Turing struggled with his sexuality throughout his life and was prosecuted under homosexual acts for “gross indecency”. He later committed suicide due to his personal struggle. I feel that I could relate to this character because I was facing the same struggle for a period of time and constantly felt that I was rejected by the society.

Lili Elbe was a Danish transgender woman and one of the first identifiable recipients of sex reassignment surgery. I admire her courage to challenge the norm during that period of time when homosexuality was not accepted, and also risked her life to undergo sex reassignment surgery even though the procedure was not performed on anybody else. Like Turing, she was struggling with her sexuality after she was married to her wife then.

Lady Gaga is an American singer, songwriter and actress who uses her influence to bring attention to social issues such self-confidence, well-being, anti-bullying, mentoring, and career development. This is because when she was a teen, she was being bullied, raped etc. and she wants to use her influence to help people. Gaga was one of the pop artist that helped me to walk out of my struggle during a period of time.  The message from her performance and music has encouraged me to love and be myself, and helped me to find confidence in myself.

Beyonce is an American singer, songwriter that often uses her music to express her feeling and thoughts. She recently moved on to use music to address social issue and also highlight her personal life with her long time partner. She’s also a very prominent feminist and is an icon for girl-power. I am a huge fan of Beyonce not just because of her talent and performances, but how she uses music to express her feeling and struggle in life, and still carries put up a strong front as public figure. She reminds me of myself – always put on a cheerful front but keep all my negative thoughts and feeling within myself.

Khairul was a friend of mine that I met during army. He was a fine art student in NAFA who usually appeared in drag queen outfit. He had never let anybody’s judgement or opinion from stopping him to dress like a lady, and strive to be a kind and empowering person. He had an awesome life ahead of him, until he was diagnosed with cancer. Sadly, he passed away in 2016. He has always been an inspiration to me and it was him that I felt that it was okay to be gay.

My mummy is an iron-lady who always get things done efficiently. When my dad passed away, she never shed tears in front of me and continued to get things done for the funeral. However, I have seen her tearing in her room occasionally and realised she has been vulnerable inside but wouldn’t want to show it to us. I was kind of influenced by my mum’s personality and I see some similarities between us.

My final selection is Muhammad Khairul Ikhsan. I really thought that he represents my alter ego and I feel a strong connection between us. I also want to take this opportunity to pay tribute to him.

I had this concept in mind while I was in the process of exploring different characters – to show the other side of me which I know existed but was never shown to anyone. I’m usually cheerful and positive in front of people but deep down I’m struggling with self-doubt and I always feel that I’m not good enough. I fear that one day this side of me will overpower the positive side and it will eventually fade off. I discovered this side of me through the process of selecting Khairul, a friend I met in the army who passed away last year. I feel a strong connection with his story and how it kinda reflect my fear of non-existence.

Developing My Alter Ego and the Setting

Hence, I kind of blur the line between portraying him and myself – It’s like a hybrid haha. Khairul was in Drag outfit most of the time, so I borrowed his appearance by putting on light make-up. This also to show that I am being part of the LGBT community and how I am opened to the public (similarity between me and Kairul).

I also created a fictional profession for my alter ego – a performance artist – to relate his life to his career and theatre, and how he doesn’t want his life to end and leave everything behind.

To create more dramatic effect, I also decided that my Alter Ego should diagnose with cancer also, and to link it back to Khairul.

Lastly, Khairul and I are both study art and design so I wanted to create a set whereby it kind of show that element subtly.

I wanted to express mournfulness in this 1-minute video and I find it difficult to create a impactful message without using a classic linear plot structure. I decided to just focus on the character, and keep it very minimal with first person POV Character Voice and raw in emotion. Here are the some of the videos that I drew inspiration from:

This video created for the Anti-Gambling campaign really caught my attention when I first came across a few year ago. I really like the lighting and how it only focuses on the 2 characters to send a message across.

I came across this video while browsing youtube for inspiration, and I really like how the actress progressively changes her expression throughout the film. It feels like the character was hiding her true self at the beginning and then finally revealed herself at the end.

I really like the opening scene of Whiplash. I like how we first hear the drumbeats  and the camera pan towards the main character. But for my film, I want to pan out from the character to suggest that he is faded away from the stage/his life.

Combining these 3 favourite scenes, I come out with the storyboard using the test shots:

The location is in the drawing room because Me and Kairul are both art student (2nd similarity) and the use of spot light is to recreate the lighting you see onstage.

Towards the end of the film, the camera move away from the character, which symbolize fading off (or the end of the show) while the character is still on stage, breaking down. Actually, you can’t really tell from the storyboard that it is a linear plot structure, but it can be heard clearly through the monologue which I will cover later. 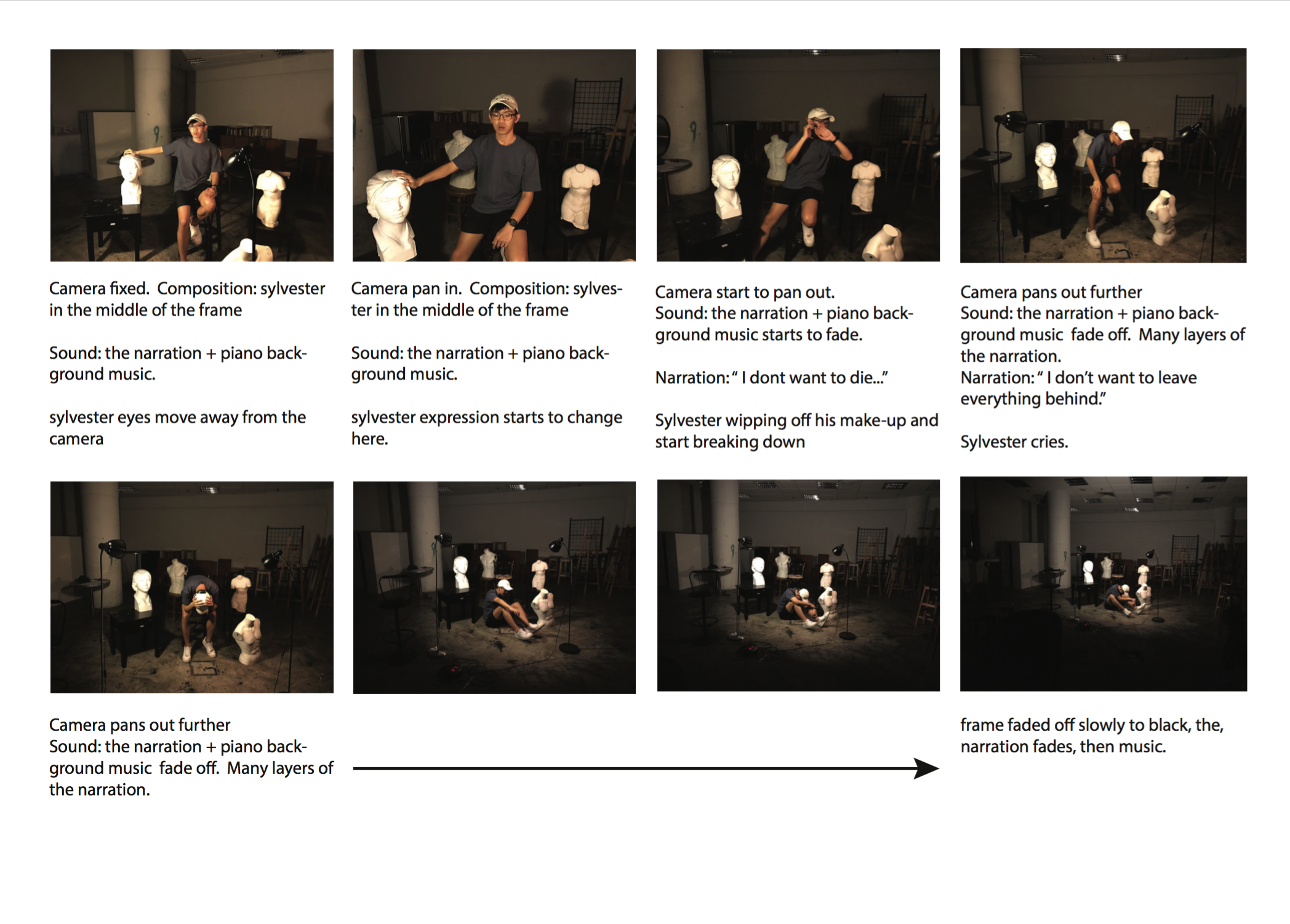 I applied the dramatic monologue that was taught in class because I thought by using the first-person point of view to reveal my inner thoughts, it will create a more dramatic effect. I had a hard time drafting the monologue because I do not want to distract the viewers away from the character’s expression, which is the focus on this film. Hence I tried to put in less words for my monologue but it somehow didn’t really worked out well.

My name is Sylvester and I am a performance artist.
I love life and I am happy with who I am and what I do.
I live for the stage. (Beginning)

Not long ago, I discovered that… I had terminal cancer. (Middle)

My world is falling apart.
I don’t want to die. I can’t die.
I can’t leave the stage.
I want to live, so badly (Ending)

After consulting Wen Lei, she actually suggested to take out some sentences, especially the part where the character’s expression changes. I’m really happy with the final result and I’m amazed that by removing sentences from the monologue it actually pushes the story forward.

I am a performance artist.
I love life and I am happy with who I am and what I do.
I live for the stage. (Beginning)

Not long ago, I discovered that… I had terminal cancer. (Middle)

I want to live, so badly (Middle)

Finally, here is the 1-minute film that you guys have been waiting for hahaha!