It is very interesting to take note that the people that took part in ” Grand Theft Avatar” were not from the same country but were people from different parts of the world, from different time zones.

“We essentially inhabit a swath of networked space, no longer constrained to the singularity of a single moment or place.” – Packer R. “The Third Space,” (2014) in Reportage from the Aesthetic Edge This piece was a great exploration of what the artist could do with the internet and technology. By using “Second Life” as a medium which they could carry out their performance of robbing a bank and making it live with conversations being carried out and the multiple camera angles really changed the rules of the narrative. “Second Front creates theatres of the absurd that challenge notions of virtual embodiment, online performance and the formation of virtual narrative.”  – Second Front

I think the internet also gives a sense that we can do crazy things without suffering consequences. Taking for example the part in the video which they jumped out of the helicopter without a parachute and sitting in top of a rocket. These are stunts that we can never pull in real life without killing ourselves. Therefore, I feel that this piece was very successful in showing the what collaborative effort on the net can produce. 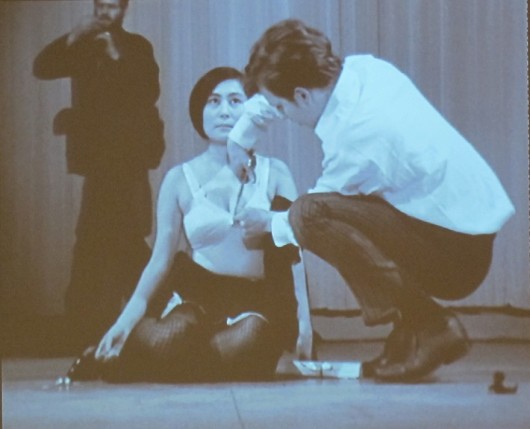 I think that this piece of performance art had suggested issues about power and the shift in the power from the artist to the audience and how these lines are blurred. In addition, the audience somehow also become the performer, changing result of the performance.

What particularly stuck out to me was the last guy in the video who took his time during his turn to cut off her top. I felt that it was distasteful and I was also upset about it. It also revealed the mindset of that person and it added an additional layer to the performance.

In addition, on the topic of exquisite corpse, I do agree that

“One of the best known examples would be the Surrealist game: exquisite corpse (exquisite cadaver), in which a group of artists would compose words or images collectively using pre-determined rules to construct a composited work that is the summation of each artist’s individual contribution.”- Randall Packer (2015). “Collective Narrative“.

I had the opportunity to make a video with the idea of exquisite corpse last year and it produces some very interesting results.

For this project, we asked people in NTU to help us contribute words for our story.They do not know the whole story, just the words before theirs.