Here’s some pictures of me behind the making of my tote bag design :> My first time experiencing silkscreen technique using darkroom. Back in poly days, I had to draw on transparencies and manually cut my design. Luckily, this time the process is much easier. By just printing my design and applying the blue emulsion in the darkroom then exposing it to light.

I decided to print my designs on newsprint first to ensure that I am able to execute it properly on tote bag. The amount of ink, the pressure and also the determination to complete it in a go. All of these factors plays an important role in producing a nice clean cut silkscreen-printing. Overall, it was a very nice and wonderful experience.

This is the latest movie that I had watched. It is about a sixteen-year-old Jacob Portman grew up listening to his grandfather tell him stories of living on an island in a children’s home where each child had a supernatural ability of some sort.
Grandpa Abe tells Jacob fantastic stories and shows him photos of peculiar children—invisible boys, strong girls, and people with mouths in the back of their heads. Jacob believes these tall tales until he gets old enough not to.
When his beloved grandfather passed away, Jake clues to a mystery that spans different worlds and times, he finds a magical place known as Miss Peregrine’s School for Peculiar Children. But the mystery and danger deepen as he gets to know the residents and learns about their special powers – and their terrifying enemies. Ultimately, Jake discovers that only his own special peculiarity can save his new friends. Some stills/posters from the movie; 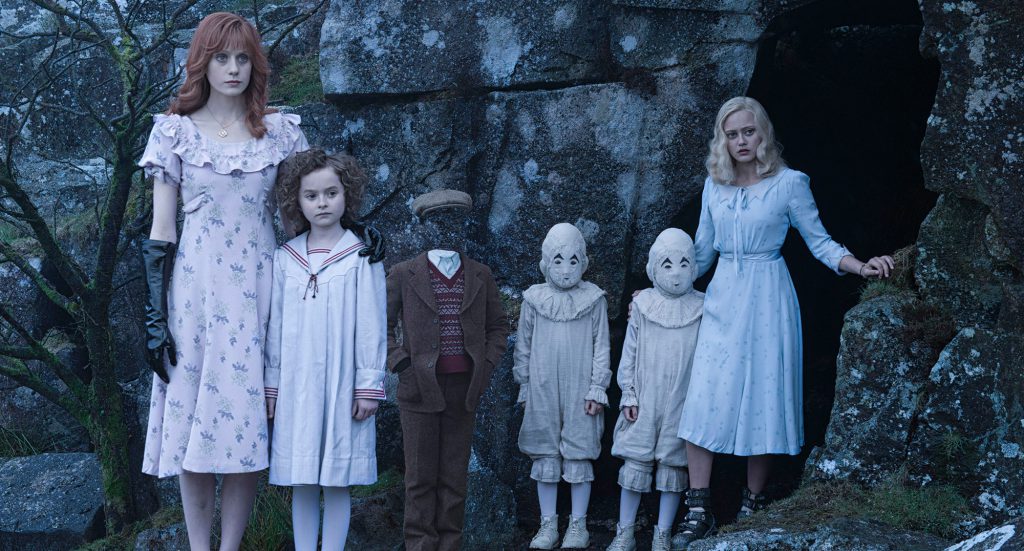 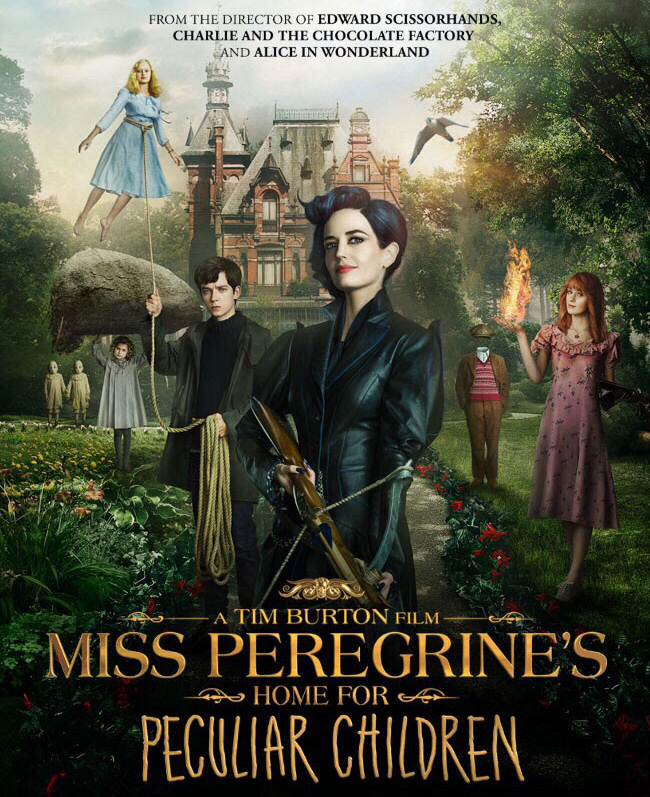 For my design, I wanted to combine all of the children’s characteristics in a single image. I thought that it will be not be meaningful if I just create characters that represent themselves in a straightforward manner, from the movie itself. 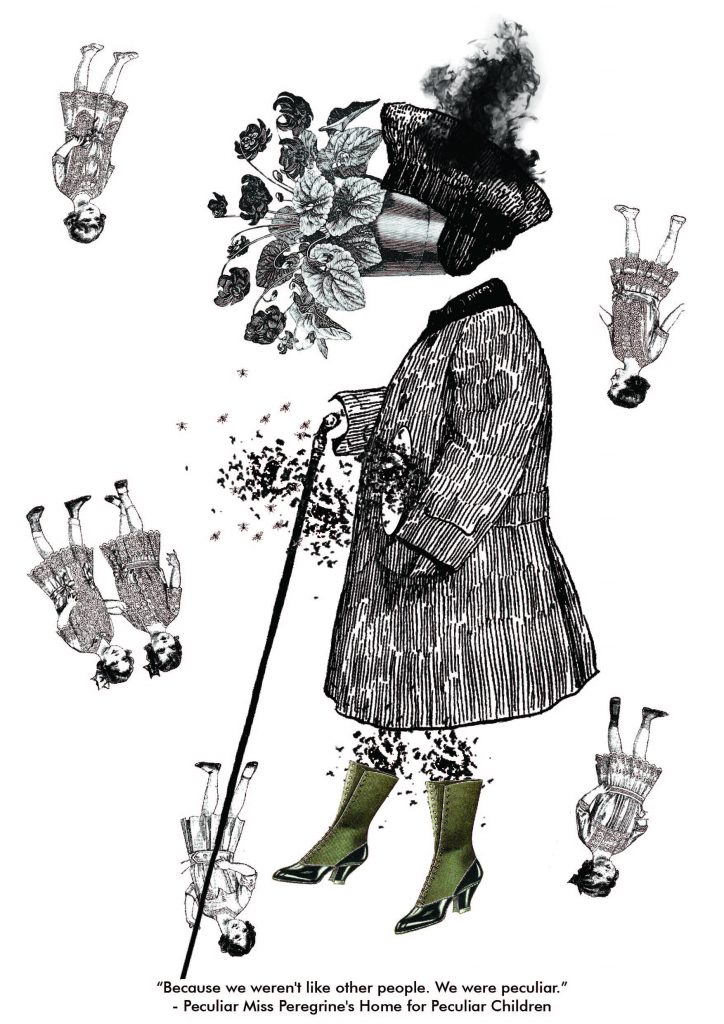 This first draft looks clustered and chaotic, with disorderly manner, hence, for second draft, I aligned the children at the background. This can also portray a message which says that the children looks normal from afar, but as you get to know their secrets/ability, they are different. They are peculiar. Peculiarities are special powers syndrigasti are gifted with. As said in Library of Souls, a peculiar’s soul (containing their peculiarity) is precious.

As for my last draft(below), I had included the abilities of levitation, invisibility, bee control and dream manipulation into one form. As they were all different, they had a sense of comradeship as they knew the difficulties of being different. They are united as one, hence, I placed all of the different abilities/powers into a single form. ‘Romeo and Juliet’ is set in Verona, Italy, where there is an ongoing feud between the Montague and Capulet families. The play opens with servants from both houses engaged in a street brawl that eventually draws in the family patriarchs and the city officials, including Prince Escalus. This feud causes tragic results for the main characters in the play,Romeo and Juliet. 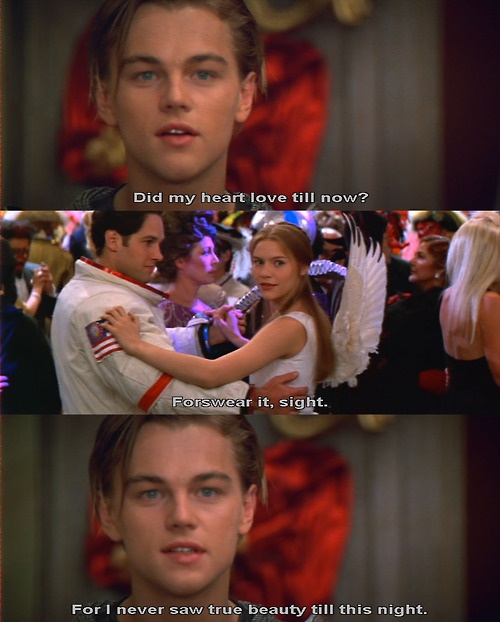 When you forswear, you abandon something completely. In Romeo and Juliet, Romeo is at first smitten by the maiden Rosaline, but once he lays eyes on Juliet, Rosaline is history. He says of Juliet, “Did my heart love till now? Forswear it, sight, for I ne’er saw true beauty till this night.”

Initally I was not sure of its meaning, but as I went research into it, it supposed to mean that he has never seen true beauty until that point. Meaning that his idea of “beauty” has changed and was nothing when compared to the beauty in front of him at that moment. This movie focuses on romantic love, specifically the intense passion that springs up at first sight between Romeo and Juliet. Hence, the main characters in my design consisted of a female and male, looking intimately with each other. The ‘night’ from the quote is represented by the backdrop and also the stars on the lower part of the design..

Then I moved on creating a wavy lines which represents the difficulties that they faced. Ok, these difficulties happened after they first met, whereby their families had involved in a feud together, interfering with their relationship. I extended the wavy lines outside of its frame, to reiterate that the family’s feud is slowly ‘eating them up’ and eventually will break off their relationship. These wavy lines are the ‘ups and down’ of the whole situation that they were in.

Additionally, to make the whole composition more relatable and interesting, I add in stars in the ‘wave of difficulties’ that they were in. This is because, their first meeting/ sight was during that night dance. And hence, I want to reiterate their first meeting together.

Design #02 (other designs will be uploaded in next few days)

The Face of Another (他人の顔, Tanin no kao) // Movie Synopsis

The story follows an engineer, Okuyama, whose face is severely burnt in an unspecified work-related accident. He is given a new face in the form of a lifelike mask from his doctor, but the mask starts altering his personality. He was warned  that the mask may change his behavior and personality so much that he will cease to be the same person that he was. Anyways the 2 important keywords are monsters and people. Hence, I want to create a “creature” in half monster and half human form. This can be interpreted as a human in monster’s form or monster in human’s form. This interpretation best suits the movie quote which goes “There are monsters who act like people and people who act like monsters.” (this is quite similar to the famous quote ‘the glass is half empty or half full?’) It depends on the one’s perspective. Hence, the composition I eventually produced is made up of upper body parts- human and the lower body parts-octopus (which considered ‘monster’ to me due to its weird/eerie looking shape). And the legs of the octopus, each holding a normal daily things such as pots, teacups, garden pails, flowers, kitchen utensils and etc. This is to show the human side of the creature. I also insert a kitchen area as the background of the whole composition to gives off the idea that the monster is disguised in human form, doing normal daily stuffs just like any other human beings. (I thought it should not have been mattered whether the character in my design is a female, as the quote was directed to his girlfriend, which noticed the changes in his personality.) Initially, there was a kitchen in the background. But I discarded it as it seems out of place. Below are my discarded/rejected ideas: Anyways after consultation, I realised that I should change the character in my design to a male instead of a female, as the main character in the movie is male. Also, the octopus seems too ‘octopus-ish’ and my intention was for it to look like a monster. Hence, I create another draft for design #02 as shown below; 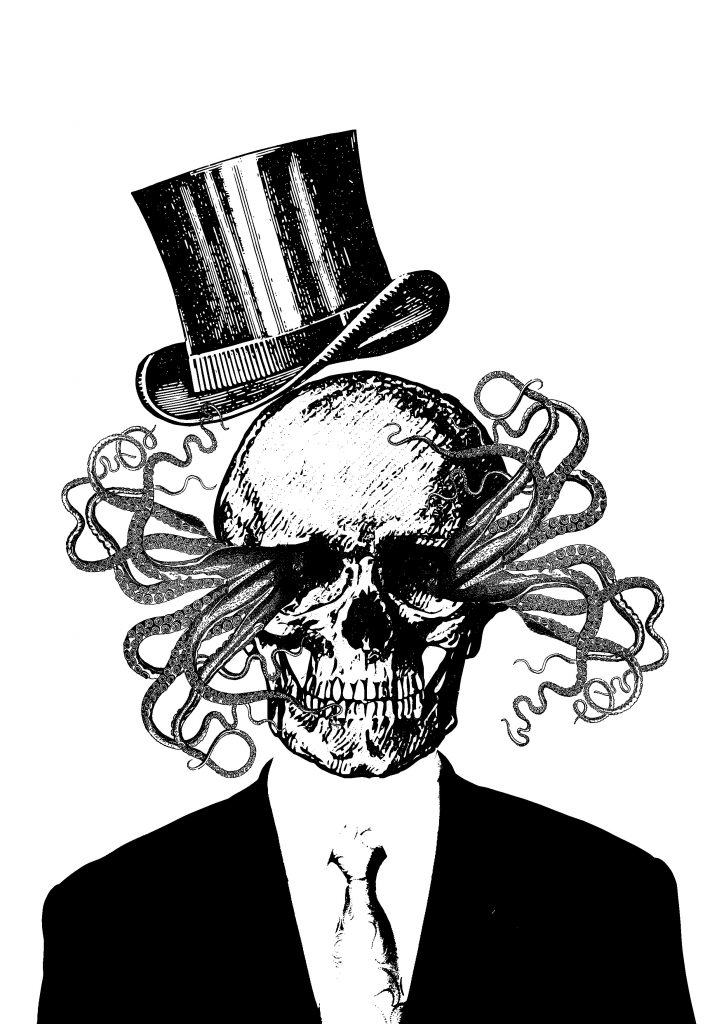 Since the main character in the movie disfigured his face due to a burn, I intentionally placed a skull instead of a normal human’s head. And the main character’s personality began to distort and change, creating a monster inside him whenever he wears the “life-mask”. Hence to represent his monster soul that trapped within himself, I inserted the eerie-looking tentacles that pours out from the hollow eyes.

The rest part of the design such as the suit and hat, is just to further reiterate that it is a guy, based on the movie itself.

Design #01 (other designs will be uploaded in next few days)

A European vacation was intended to repair the tattered relationship between American Jack (Adam Goldberg) and French native Marion (Julie Delpy). But, by the time they arrive in Paris to visit Marion’s family, it is clear the trip is not going well. The city brings out aspects of Marion that only alienate neurotic Jack further, from her in-your-face politics to her former boyfriends, who surface in every cafe. Thus the most romantic city in the world could mean the end of the couple’s romance. 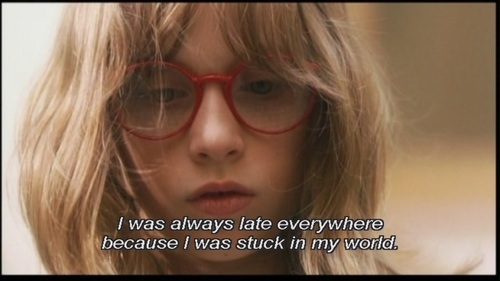 For the first draft, I make it really simple and straightforward. The idea of late is represented by the clocks. And these keywords: “everywhere”, “world” are both represented as globes.

The butterflies shown is the main character, Marion. These butterflies revolved around the globes, whereby she “was always late everywhere”. Whereas the clocks shows that the time is ticking away and waits for no one- including her. This explains why she was always late. I also had included the Paris Eiffel Tower to emphasis the title of this movie which is “2 Days in Paris”. The main character, Marion, was involved in many complicated relationships in the past. Coincidentally, she kept meeting her exes and hence agitated her current boyfriend. She tried making up excuses along the way. This brings to my second draft of design #01. I tried complementing flowers with the Roman clock as these flowers refers to Marion. She was like a flower, attracting guys wherever she goes. Also, I inserted the Eiffel Tower, just like the movie title suggested. 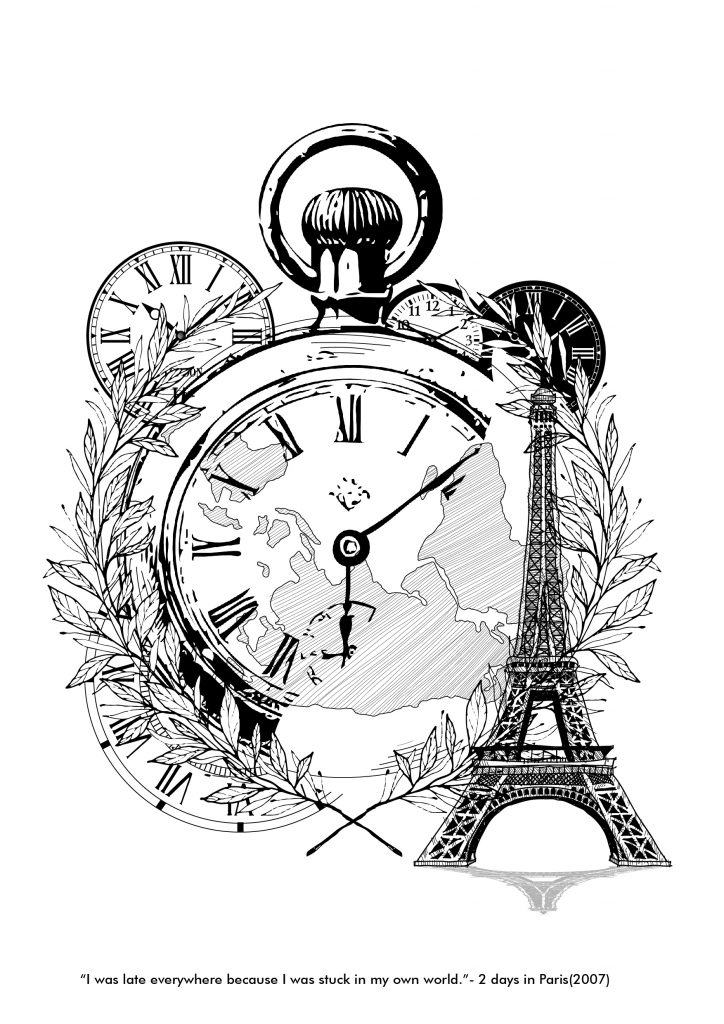 However, I am not really satisfied with the design as there is like 2 focus point in the whole composition, which are the Eiffel Tower and the Roman clock. So, for the third draft of design #02, I eliminated the Tower. Personally, I liked this design the most, but it looks abit cluttered and packly dense. The idea of using flower here also might not be appropriate and does not really shows its hidden meaning behind it. The globe, which is inside the roman clock does not really shows and has a lack of presence. So for the fourth draft of design #01, the main focal point would be the globe. Draft #4 is my favorite of all, hence it might be included in one of selected designs.