Interference Pool is an interactive audiovisual installation that aesthetically and conceptually explores the idea of virtual and physical space. This artwork installation is a collaboration of Cuppetelli and Mendoza as well as a sound designer artist, Peter Segerstrom. This is an extension of their previous collaboration, Transposition, which is a further development of Cuppetelli and Mendoza’s past works which were Nervous Structure and Notional Field. This artwork was first exhibited at the Muskegon Museum of Art, Muskegon in 2014.

The work consists of two floor sculptures, faced with a series of parallel elastic cord lines. The materials and equipment used in this in installations are plywood, elastic cord, video projectors, video cameras, sound system, computer and custom software. These sculptures are lit up by two video projectors, which output a computer generated graphic consisting of a set of white lines equal to the physical lines in the structure. With the aid of a video camera and custom software, the video projections react to audience’s motion. As the audience moves, the computer determines the direction of the motion by interpreting and even anticipating their actions. Then it generates a set of virtual forces that affect the lines, which curves and bend in a highly naturalistic way, as if they were being disturbed by wind or waves. In addition, the viewers triggered sounds as the system detects motions from their movements, therefore creating an ultimate immersive and responsive sound environment. The purpose of this artwork is to contrast two very distinct aesthetics and ideas, the highly rational stiff grid against the organic essence of forces. Based on the title of this installation, it has reference to the optical effect that happens when these two elements interact. As two of these elements combine, an “interference pattern” is created. Hence, the audience could see their actions directly affects the straight rigid grid lines projected which resulted in an organic wave pattern.

Extension from previous collaboration of “Transposition” 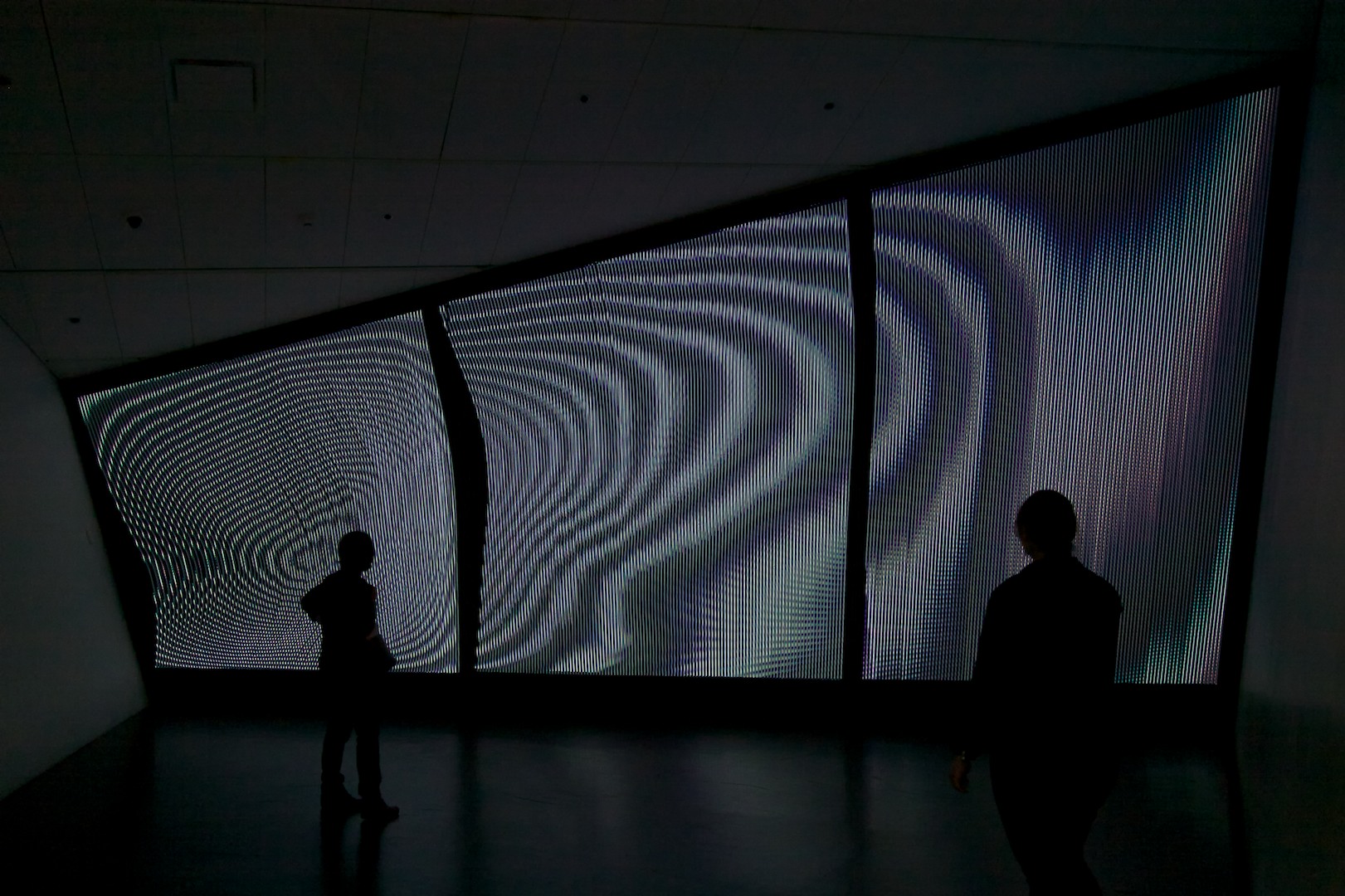 This installation is an extension from their previous collaboration of “Transposition”. Transposition is an audiovisual, interactive, site-specific installation and it also explores the notion of virtual and physical space. By adding sound to Transposition, it closes the gap created by the experience of ‘disembodied embodiment’ that occurs when you interact with these artworks. For example, as the audience moves the artworks respond accordingly even though there was no actual touch involved. The perception of touch is heightened by the interactive environment through the sound system. Hence, just like the projection of those lines, the sound system generates audio according to the body movement of the audience. This physically engages the audience into an immersive interactive environment and thus to close the perceptual gap between body motion and reaction. 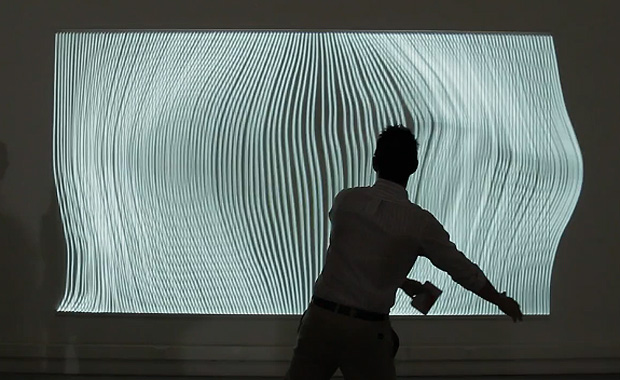 The artwork “Interference Pool” was also further developed from previous work named “Notional Field”. Notional Field is also an interactive installation which consists of a wall-mounted sculpture containing hundreds of vertical and parallel lines made of elastic cord. Similar number of lines were projected upon those elastic cords. The motion of these projected lines is ruled by a simulation, which makes them act like soft ropes or waves. These motion is influenced by the audience movements as interpreted by a computer that analysed the scene through a video camera. Therefore, the motions and gestures of the participants are translated into virtual forces that affect the computer-generated lines. However, the physical strings of the elastic cords of the artwork remain motionless. The idea of interface was introduced in this artwork, which is interpreted as the point of contact between two different entities.

To summarize about the chosen artwork, “Interference pool”, it is basically a culmination of several iterations and past works of Cuppetelli and Mendoza. This artwork is a full blown interactive audiovisual installation which combines several elements from their previous collaborations and projects. Each offers improvements over their previous installations until “Interference Pool” became one of their most known artwork.