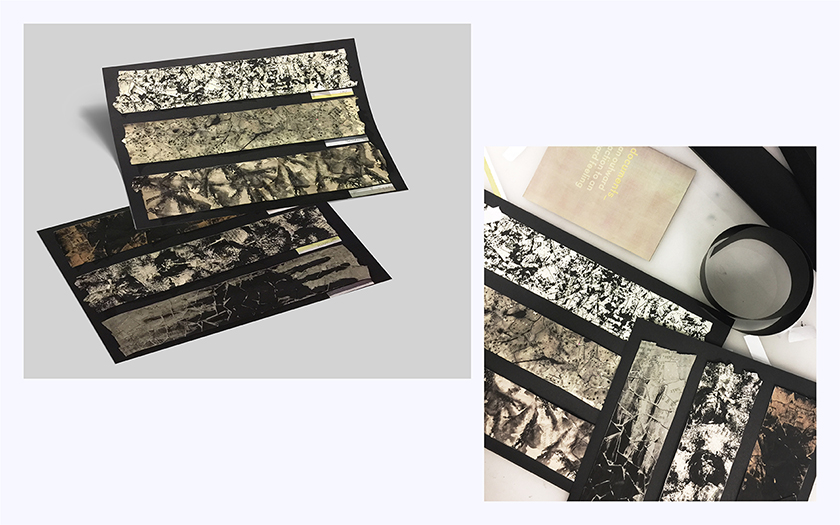 synopsis()
what is an emotion? is it an intrinsic feeling or an extrinsic expression? how then can we document_ these intangible emotions on physical matter?

a sentiment, an experience, a memory or a feeling — captured in a document_ — emotions splayed upon these fibres in ink, etched upon my memory in nerve, marked upon these matter in matter.

and thus upon these lines, materialised my emotions as \outward reactions to inward feelings.

about()
documents_ is an abstract mixed media piece that constitutes of six lines of block printing ink upon paper mached documents. each line expresses an emotion that is embodied by the document in question.

while the lines carry visual indicators of the relative emotions, the process and mark-making tools used are also significant of the premise. and while the lines symbolize varied emotions, there is a gloominess throughout the strokes — a dark joy, a conflicted surprise, etc. — that comes off the organic expression of a heavy narrative. 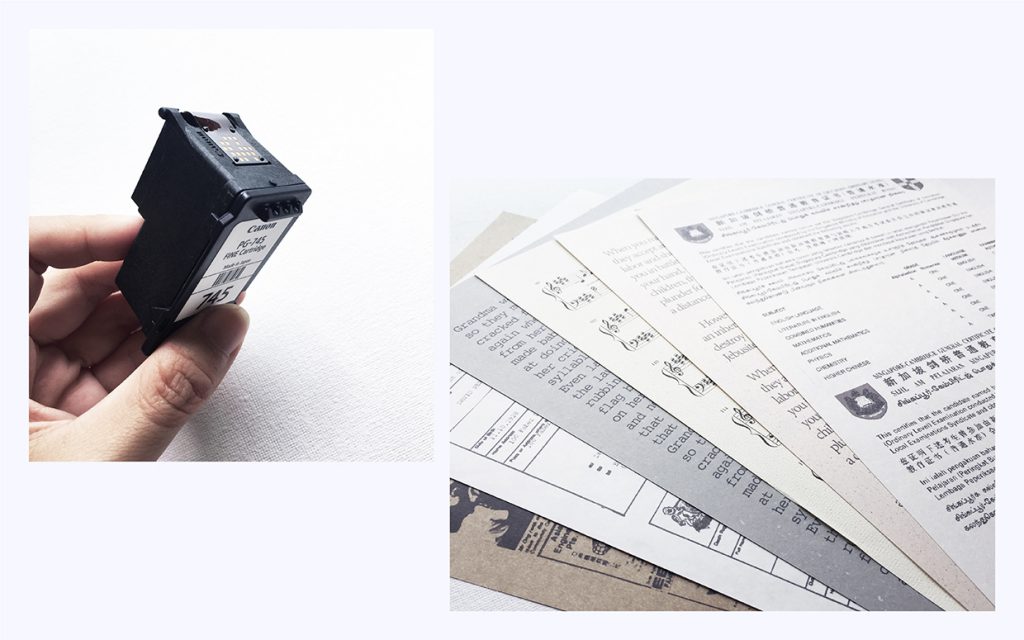 preliminary mark-making_
the first step in my mark making process was to curate a set of close-to-heart documents_ that embody six different emotions (to be discussed in the later parts of this entry). i then scanned and processed them in adobe photoshop to reproduce the print on paper of my choice. 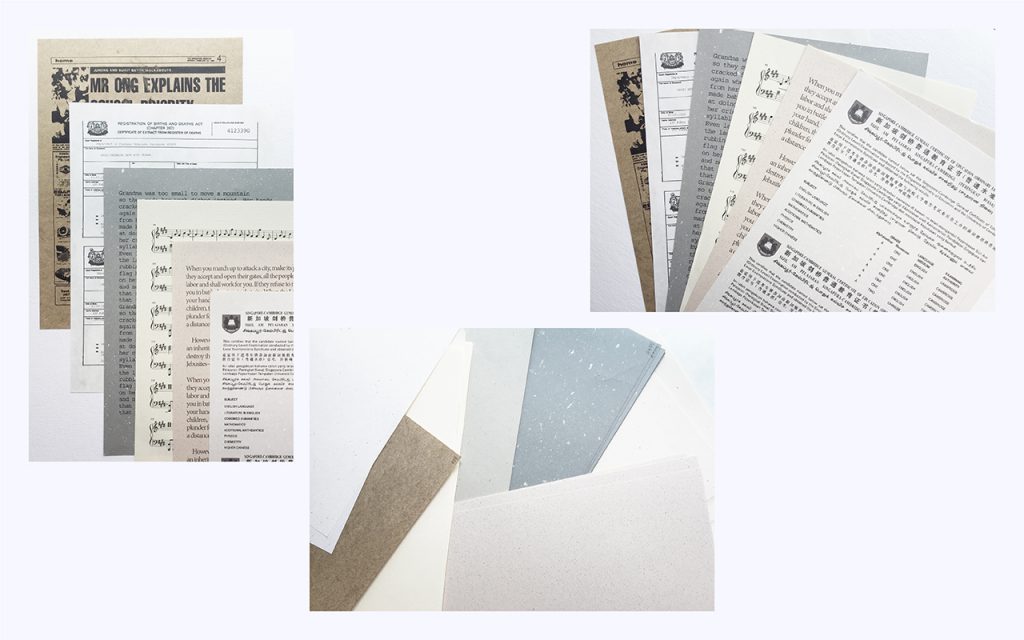 choice of paper_
i chose paper to match the contextual properties of the documents. the colours and textures of the paper resemble what these documents were originally printed on — vintage newsprint paper, certificate paper, stone-textured paper, etc. the varied textures also created a nice variation in the grain and texture of ink marks. 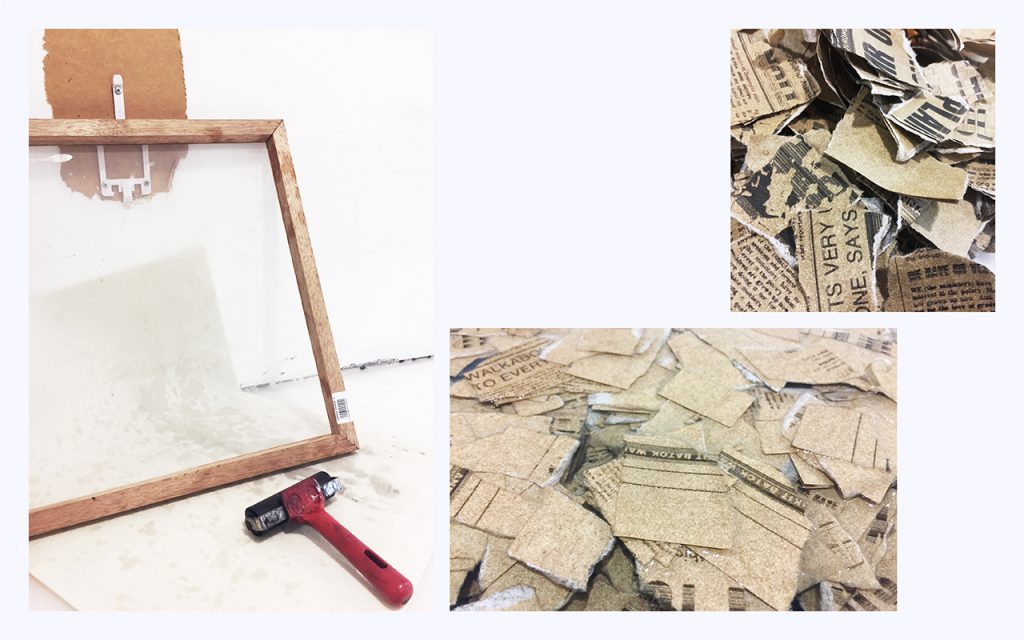 treatment of paper_
i soaked the paper in hydrogen peroxide mixed water to wear the print. afterwards i lay them on a silkscreen and pressed them dry with a roller and felt paper. they were then dried between sheets of newsprint paper on a rack.

my grandfather was an abusive man. at his funeral, though gloomy, i felt a stark feeling of joy. it was a spontaneous feeling that bubbled and exploded in little bursts, yet the undertone was sinister. there was an intense happiness during his wake. my brother and i kicked around the cathedral for the first time, it was the start of our freedom. we could finally return to a home without worrying about how our calves would feel the next day. it was an exciting new feeling – tears of joy were salty yet sweet.

for this piece, i trampled on a mache of my grandfather’s death certificate with an inked slipper. the grain of the slipper and the ink that gets caught on the grooves of the paper mache form bulbous shapes that combine in little explosions. the movement is swift and has an upward trajectory, much like the bouncy feeling of joy. yet the undertone is not too pleasant, significant of the deep feelings that brought about this joy.

during my teenage years i experienced simultaneous crises of identity and purpose. i was in a slump and my feelings were raw. many of my peers poked at my fragile emotions and made me question my existence. and the silence at home was deafening. i would listen to ‘drown’ by bring me the horizon, an alternative metal song that bore uncanny resemblance to my plight, proof that i was not alone. even to this date, the song pulls at the strings of my adolescent memories and feelings of tenderness.

What doesn’t kill you makes you wish you were dead.
Got a hole in my soul, growing deeper and deeper.
And I can’t take one more moment of this silence.
The loneliness is haunting me.
And the weight of the world’s getting harder to hold up.

It comes in waves, I close my eyes.
Hold my breath and let it bury me.
I’m not okay, and it’s not alright.
Won’t you drag the lake and bring me home again?

Excerpt from Drown by Bring Me The Horizon

these lines inspired me to use water in this piece. i drenched my paper in water and splayed diluted ink over it to create a feathered print.

my first layer resulted in a light greyish splatter print that watermarked over the paper. i decided to go over it with concentrated ink to create aggressive splotches that feather out slightly at the edges. the print looks almost painful to touch. the splatters are raw, but connote a certain fragility and rawness.

fear is the day i stopped going to church. to those who bullied me and those who i bullied, the pastor read this scripture:

When you march up to attack a city, make its people an offer of peace. If they accept and open their gates, all the people in it shall be subject to forced labor and shall work for you. If they refuse to make peace and they engage you in battle, lay siege to that city. When the Lord your God delivers it into your hand, put to the sword all the men in it. As for the women, the children, the livestock and everything else in the city, you may take these as plunder for yourselves. . . . This is how you are to treat all the cities that are at a distance from you and do not belong to the nations nearby.

However, in the cities of the nations the Lord your God is giving you as an inheritance, do not leave alive anything that breathes. Completely destroy them—the Hittites, Amorites, Canaanites, Perizzites, Hivites and Jebusites—as the Lord your God has commanded you.

the verse, on destroying other people, frightened me. it was the first time i questioned the beliefs that i had based my life on. the divine power that i thought was there to protect me had turned into my biggest punisher. all of a sudden i realised i had been sinning my entire life.

this inspired me to create splattered lines that depict a speedy movement. the strokes are fast, sharp and haphazard. yet you can notice a muted tone in at the broader end of the line. i wanted to create a line that embodied the feeling as fear hits in riptides that stun and confuse with the influx of realisation. fear is unexpected and random, it will jar. the haphazard axes of the lines resemble this phenomenon. sub-note: though unintended, the thorny nature of the marks also connote the crown of jesus.

i wanted to dedicate a piece to my mother, a woman who had guided my emotions to places. my mother recommended this article of the 1984 graduate mothers’ scheme of which she had archived. she played a part in many of the rallies that stood up against this policy. the article is the first among many to oppose against the scheme; an article that projected many to follow in a national outcry. a symbol of the nations anger and rebellion towards the government of that time.

i used an old scrubbing sponge to create heavy and swift marks that coagulate to show an anger that emits and spreads. the sponge is also a symbol of the hands of women in that masochistic era, fighting for an equal environment for themselves and the children.

surprise is a feeling that catches you off guard. there are many kinds of surprising feelings, but they all give off the same kind of tingly, whirly sensation. when i received my gce ‘o’ level results, i was surprised with both high and low-spirited feelings. coming from a lower end neighbourhood school, i never thought i would qualify for a decent junior college — but i did. it was a sudden abundance of choice, and i did not know which was better, a junior college or a polytechnic. i eventually opted for a junior college, but left after a year to pursue more creative endeavours.

i wanted to create a spontaneous and whirly pattern with the round cut sponge. i used the dry sponge on concentrated ink to create the porous effect that resembles a sort of celebratory firework. i then flipped to the back to the sponge to create swirls that connote the whirly feeling that hit me at the back of my head.

perhaps the most simplistic and minimalistic of the series. this piece embodies the feeling of melancholy i get when reading my favourite poem — fault lines by cheryl julia lee. it speaks about a story much like my grandmother’s, coming from a patriarchal peranakan family, who used to be abused by my grandfather.

Grandma was too small to move a mountain
so they made her wash dishes instead. Her hands
cracked for the first time underwater,
again when she brushed a stray strand of hair
from her face, again when her touch
made baby cry. But Grandma is good
at doing what she has to do. She rubs
her cries into splintered hands, wipes the broken
syllable from her lips, and keeps on scrubbing.
Even later when they made her carry
the laundry on a bamboo pole, the wood
rubbing away at her skin, she bore it like a proud
flag bearer. These earthquakes tearing up fault lines
on her palms are too small, too local
and no one notices that she strokes with knuckles,
that she sits always with folded hands,
that the fortune teller cannot tell her future.

I wanted to create a sense of desolation and drop-to-the-ground sadness by isolating the concentrated handprints in one single spot. the stroke is slow and graduated, much like the muted sadness as one basks in melancholy. the faded ends of the handprint also represent a certain sense of loss and lack of energy. the initial palm print is heavy as if an abrupt puff of despair. 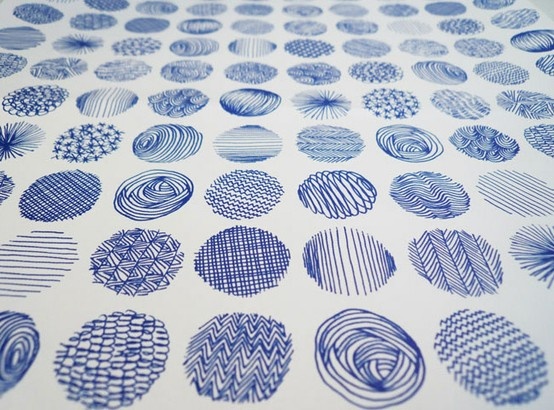 Our first mark-making assignment is an open-ended expression of 6 emotions.

The assignment allows us to explore different media to create unique marks of organic form. At this preliminary stage, we are trying out different tools and mediums to find a mark that we can call our own. Today, we created marks with basic stationery like pencils, pens and markers — blindly scribbling shapes and patterns with no premonition. Perchance, we’d find our mark.