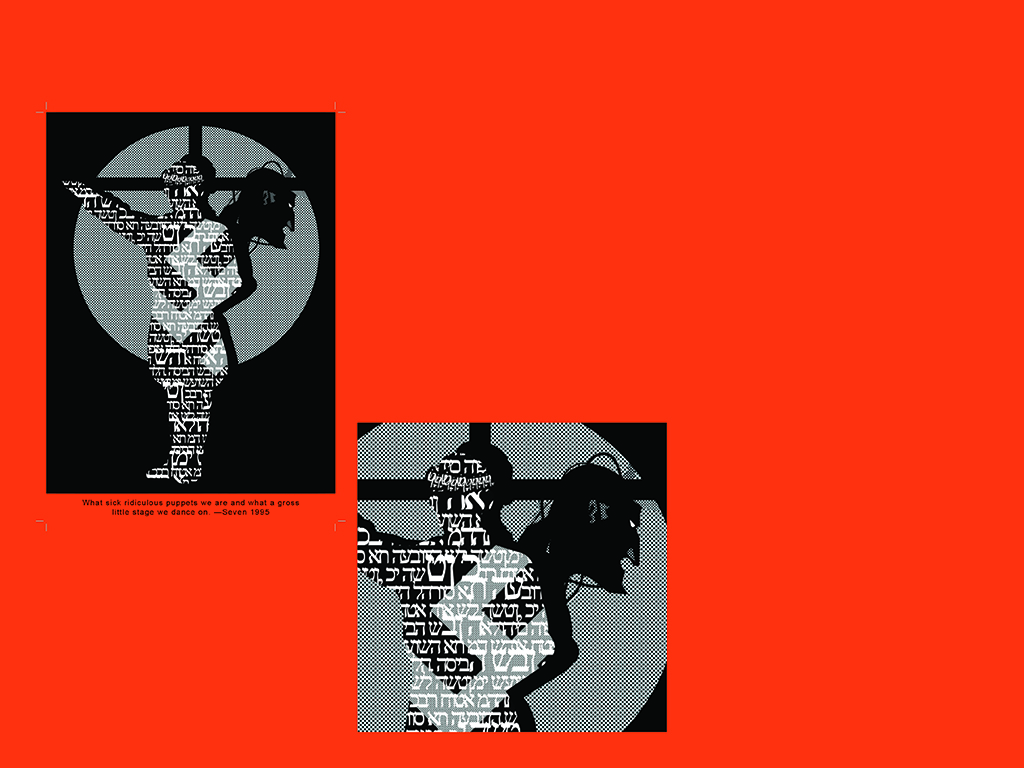 Time flies over us but leaves its shadow behind. Seven decades have passed since the last World War, yet here we are still living in finger-tapping anticipation for the next. Some say that shadows are the greatest teacher of how to come to the light. It is also my personal belief that to light a candle is to cast a shadow — and the reason we bring light to the philosophies of our predecessors is to live in its shadow.   The concept of shadows first tickled my curiosity when I discovered American Director David Fincher. His signature technique of shadow placement conceals the identity of the characters and adds texture to the setting.

I wanted to use this concept as a backdrop to dictatorship across the decades. The shadows give light to the religious connotations and propagandist notions of their rule, exposed by the literary cipher of their corresponding religions.

The artistic direction of the following compositions were inspired by the propaganda aesthetic of the respective dictators. The amount of literary elements in each composition correspond to the level of verbal communication used in their chapters. 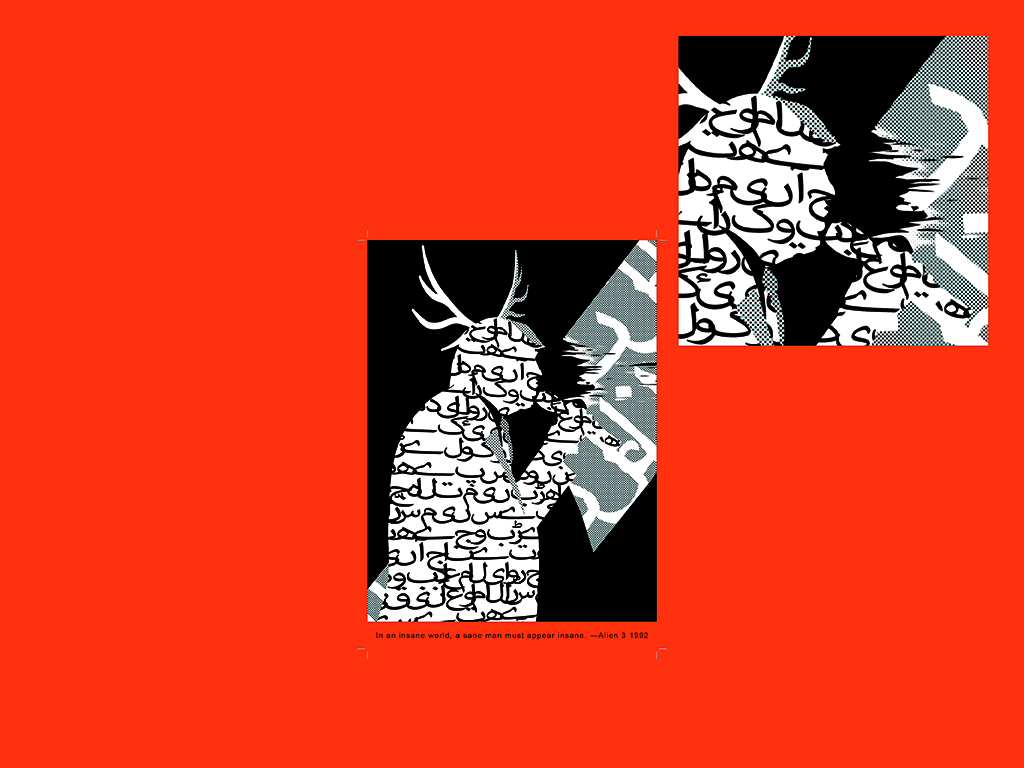 In an insane world, a sane man must appear insane.
– Golic/ Alien

This composition revolves around Donald Trump and his anti-Muslim sentiments. When I first read this quote, I was reminded of how the words of Donald Trump sound insane to some, yet manage to captivate the audiences. It portrays him to be a Jinn — a genie mentioned in the Quran to be made out of smokeless fire.

They are said to be created before man, and are mentioned in the Quran as malicious, wicked beings with supernatural powers created by God from a pure, smokeless fire, which would explain why they are often seen with smoke coming out of them:

​“The Angels were created from light and the Jinn from smokeless fire.” — Saheeh Muslim

The visual of Donald Trump is juxtaposed by a Surah in the Quran about Jinn in arabic cipher that reads:

“And there were men from mankind who sought refuge in men from the jinn, so they [only] increased them in burden.” –Surah 72

The Jinn are analogised as genies (and are depicted  in hidden ways in stories such as Aladdin) and present themselves in different forms, including humanoid and animal. Hence it is possible that they could appear in a kind of shadowy form too. They dematerialize quickly and are able to appear dark, animalistic, and even in strange contorted figures, vapours mists or cloud.

It is said that they are created out of free will as we are, and live in a parallel world to ours and in communities (much like humans). Because of their free will, some are good and some are evil. They feel themselves to be superior to humankind, and thus it is said that God cast them out of this world until ‘judgement day.’

These beings have an agenda against us, and cause a lot of chaos and havoc much like demons do, and it is believed that they are a part of the army of Satan. They have shape-shifting abilities and use them in order to create deliberate confusion.

The shadow of Trump is cast upon in a streak of arabic cipher that reads ‘build a wall’ in an visual style that mimics the propagandist banners of Al Qaeda.

His shadow is seen to be receding into the light. It makes you question his words, which is the most powerful dictating tool of Donald Trump.

What sick ridiculous puppets we are and what a gross little stage we dance on. – John Doe/ Se7en

This composition is satirical of Hitler’s Nazi rule. It portrays him to be crucified on a shadow of the holy cross. The silhouette of satan forms the other hand on the crucifix, it the poise of cruxifixction when placed against the iconic nazi hand gesture.

This quote reminded me of how Hitler puppeted his audiences with common enemy and fear. I decided to use a spotlight to depict a stagedness. The cipher cast upon in hebrew reads:

Happy is he who considers the poor; the Lord will save in the day of evil.
The Lord will preserve him, and keep him alive; he is called happy on earth; and You will not deliver him to the will of his enemies.
The Lord will strengthen him on his sick bed; whenever he is prostrate You will heal all his illnesses.
I said, Lord, be merciful to me; heal my soul; for I have sinned against You.
My enemies speak evil of me, When shall he die, and his name perish?
And if one comes to see me, he speaks vanity; his heart gathers iniquity to itself; when he goes out, he tells it.
All who hate me whisper together against me; against me they plot my harm.
They say, An evil disease cleaves fast to him, and from where he lies he shall rise up no more.
Even my own close friend, in whom I trusted, who ate of my bread, has lifted up his heel against me.
But You, O Lord, be gracious to me, and raise me up, that I may pay them back.
By this I know that You favor me, because my enemy does not triumph over me.
And as for me, You uphold me in my integrity, and You set me before Your face for ever.
Blessed be the Lord God of Israel from everlasting, and to everlasting. Amen, and Amen. 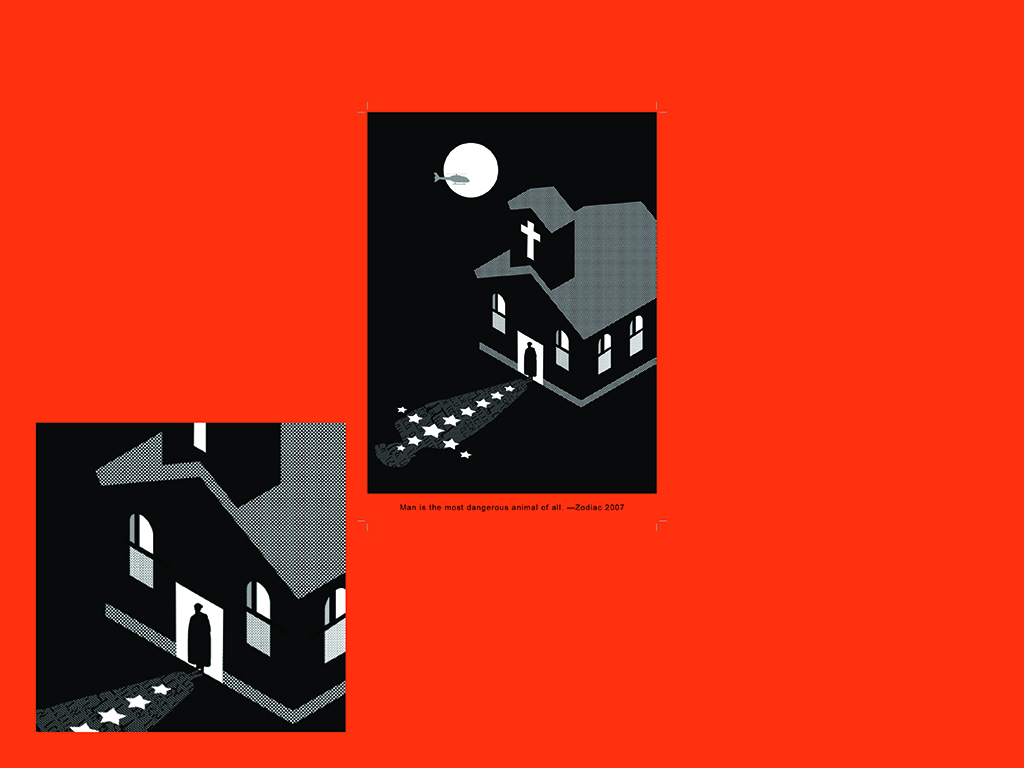 Man is the most dangerous animal of all. – Zodiac/ Zodiac

This composition is expressive of the dictatorship of Pinochet. I was inspired by an interview on the rule whereby a Chilean pronounced coup as ‘coop’. This reminded me of a chicken coop, which sparked the idea of portraying human beings to be animals. The helicopter in the background to represent the notorious purging style of Pinochet.

I wanted to express this under the premise of a notoriously dangerous shadow being known as the Hat Man. He is just like the classic shadow figure, but also different in appearance and energy vibe. This one wears what appears to be a cape or trench coat and a hat which can range from a top hat to a fedora or cowboy hat.

​The reason for this added attire is unknown. One can only speculate that it is to give a sense of mystery or even intimidation (because he is a dark, intimidating entity), or he has picked a fashion from an era and stuck with it, trying to blend in. It could be a form of mind control or manipulation, working on our subconscious minds in some way. Perhaps we associate the hat as part of a universal symbol or archetype that conveys a sense of status, influence,  power and control. It establishes a stark sense of ‘presence’ and is something you can’t forget.

​The hat could be a form of disguise to cover up an unusually shaped head that could be alien in appearance, or it is some kind of otherworldly technology or even protection device.

The shadow of Pinochet is juxtaposed by a light overlay of the arabic text from the bible that reads: “If a man beats his male or female slave with a club and the slave dies as a result, the owner must be punished. 21 But if the slave recovers within a day or two, then the owner shall not be punished, since the slave is his property.” 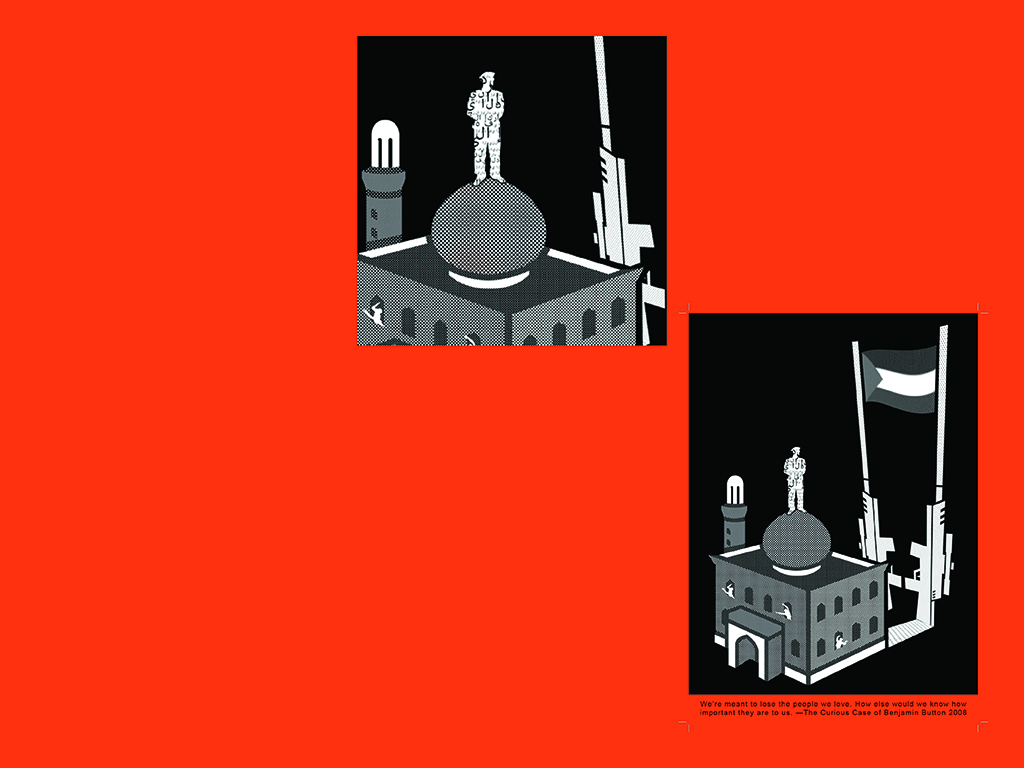 This quote reminded me of Saddam Hussein and his ultimate objective to unify by purging. A concept that led to the idea of shadow figures who are often seen appearing and disappearing in groups.

Some people have seen shadow figures outdoors or in nature settings like forests. These ones that hang around trees are said to be ‘shadow stalkers.’  Some say that they are protective spirits that guard nature and protect the elementals. They appear as shadow beings but are possibly not actually harmful.

​One of the quirks of such shadow stalkers is that they mimic people who see them. So when the person moves, they move too, when the person stops, they stop too and so forth.  Another noticeable characteristic is that when they traverse through the woods they do not cause the normal nature sound effects you would hear from an animal or person (such as leaves rustling and twigs snapping). This is because of their inter-dimensionality.

This is juxtaposed by the quote from the Quran shone on Saddam that reads: “Indeed, those who have divided their religion and become sects – you, [O Muhammad], are not [associated] with them in anything. Their affair is only [left] to Allah ; then He will inform them about what they used to do.”

Collectively, these compositions serve as political, social, and religious commentary from my personal interpretation and sentiments towards their dictatorship. It represents what I have to say as an artist and as a human brought up in a highly stringent, highly religious family — yet keeping it scoped out and open enough for interpretation.

What came of this was a propagandist multiverse that is surrealist in logic, but realistic in nature.