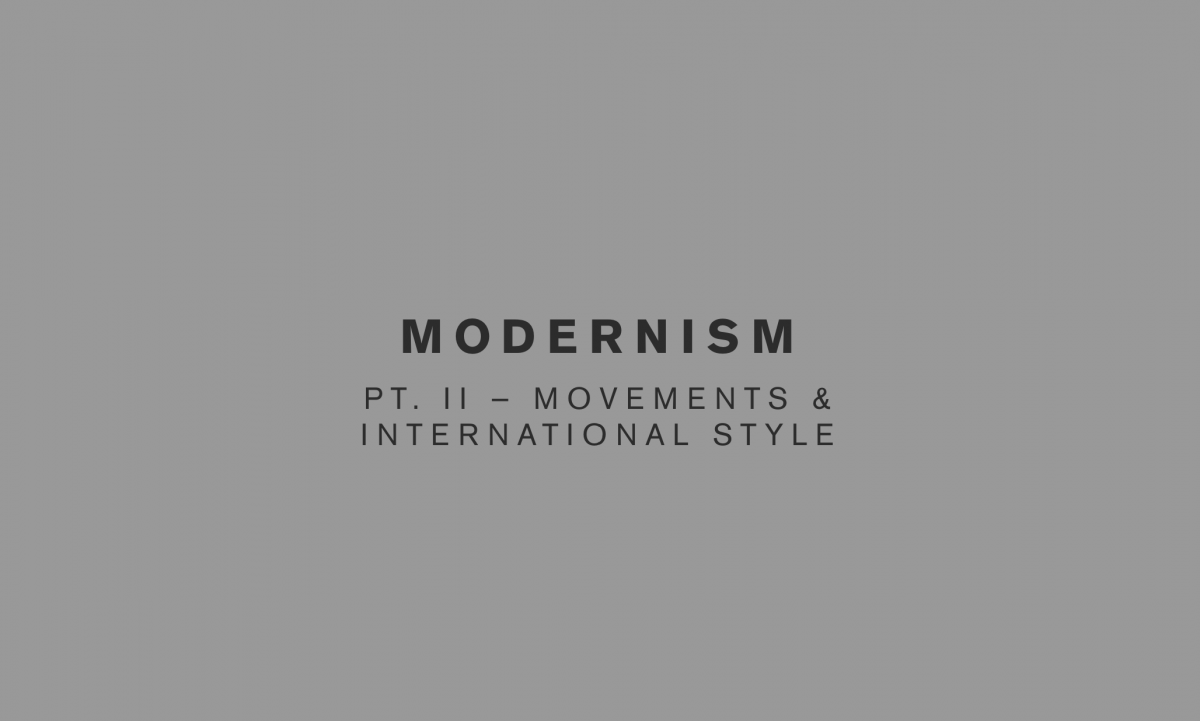 I would like to start off my key findings with the salient qualities of modernist pieces. Foremost the rule of all rules — form follows function. Where there is form, there will be function. From the late 19th century to the mid-20th century (i.e. the Modernist period), the industrial revolution grabbed our war traumatised society by the hand, offering solace and humbled practicality. In the technical terms of Product Design, you would know these values to be tangible such as streamlining, simplifying, formalised and functionalised in terms of shapes, lines and forms. We will study the Modernist salience in greater detail later. For now these notions are practically Modernism in a nutshell, though perhaps the Dadaists did not get the memo.

What seems to confuse people is the various strains of modernism that also function as stand-alone movements. Is modernism a movement? I would argue yes, but what about Constructivism, Futurism, De Stijl, Bauhaus, Dada and International Style. They too can be understood as movements, though some of them are still under the critical eye of skeptics. Under my words, as long as they stand with difference from the rest, I will consider them movements that are both individual and hand in hand under the umbrella of Modernism. It will become clearer once we have examined their key differences in closer detail.

The movement that truly celebrated dynamism, both in form and philosophy. The futurists were an inventive bunch, innovating streamlined automobiles and architecture in dynamic patterns. Futurist artworks are also unique in their seemingly echoed patterns, radiating sizes and forms that create a flow and movement through the works. A famous example of this would be F. T. Marinetti’s futuristic typography. In this particular poster we see an exclaimed trajectory in the radiating size and direction of the onomatopoeia — “Tuuuum Tuuuum Tuuuum”. 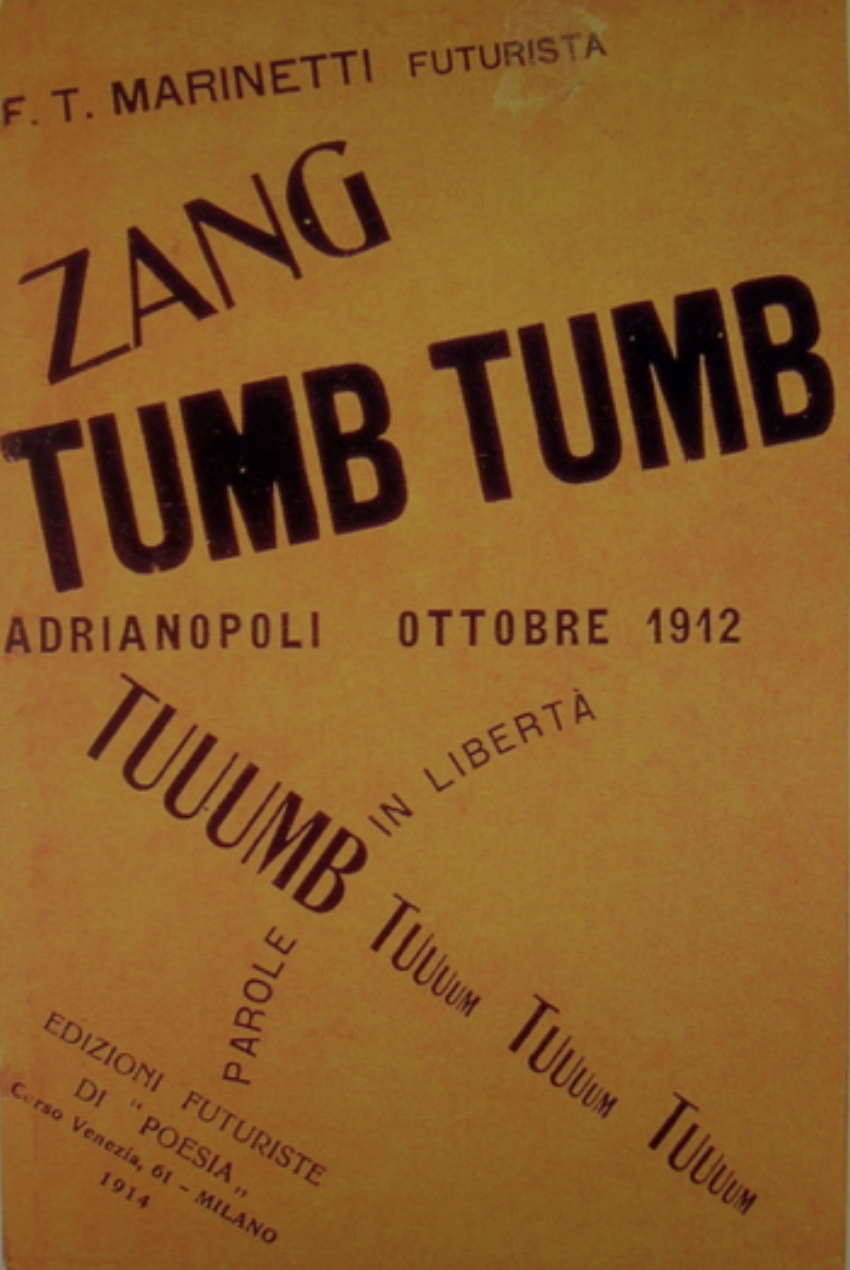 The role of an artist had expanded to that of a worker during the constructivist period. They believed that art should be absorbed into industrial production and therefore the excessive use of geometry and precision that was sometimes even mathematical. Most importantly, they believed art to have played an important role in the structure of life, as an indispensable means of human experience. The following piece by Kazimir Malevich showcases a play of kinetic planar and linear elements that is both disciplined and expressive at the same time. After World War I, order was valued over everything else. Out was born De Stijl — a style appropriate for everyday life. It was simple and logical, emphasising on construction and function. This style favoured geometric abstraction over natural forms and subject matter. Perhaps the most iconic artist of this movement would be Piet Mondrian who worked with simple rectilinear shapes, but playing with the harmony between lines masses and colours. There is also a thoughtful relationship between the positive and negative elements in the arrangement of forms  and lines. 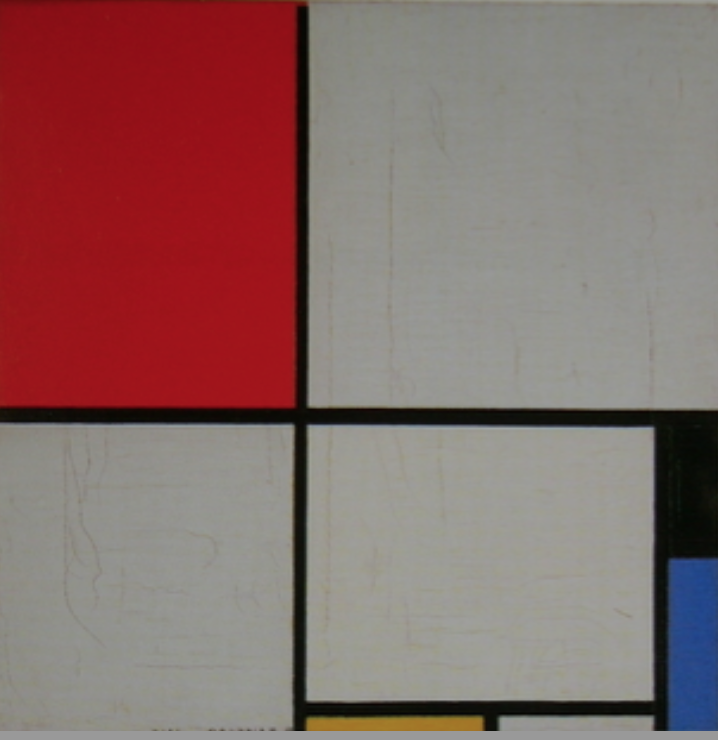 Live in the moment and for the moment, that was what the Dadaists believed in. The most isolated from the Modernist bunch, Dadaists had no rules. Their program was to have no program. They had no formal characteristics and celebrated the discovery of the strange and unusual, the discreet and new. There was no linear thought processe nor predictable mechanics and rational strains of creative ideas. It is hard to believe that Dada was modernist as well, though post-war tension could go both ways — conserve or liberate.

Le Corbusier, one of the key fathers of International Style believed in attributing ‘types’ to different functions and considerations. He believed that Functionalism was the key to a new aesthetic of machine perfection. The following artwork by Le Corbusier demonstrates his use of abstraction to depict undecorated everyday objects. 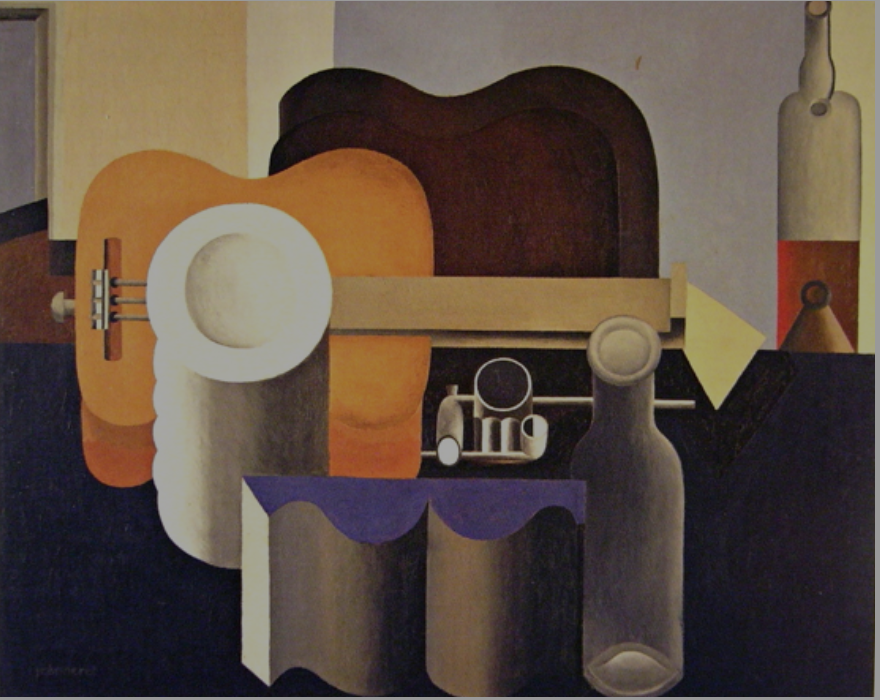 Le Corbusier – Still Life with a Pile of Plates

The following drawing known as ‘Modular Man’ showcases the different ‘types’ of postures a man can take form in and the evolving modularity of machine productions according to these ‘types’. 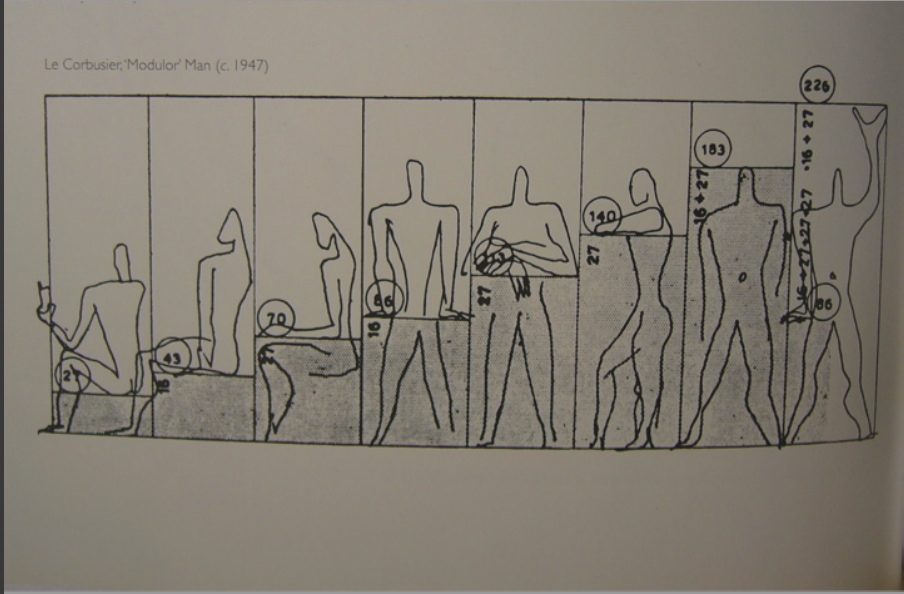 International Style was formalised by Le Corbusier together with Pierre Jeanneret and Charlotte Preened. They used the term ‘mechanical selection’ as a rationalised process leading to the forms of a variety of man-made objects. International Style was largely based on utility, economy and the permanent sense of beauty and harmony residing in simple geometric forms.

The following ‘Comfort Armchair’ was known by the trio as an ‘equipment’ or a ‘machine for sitting in’. This was the general mechanised perspective on objects in the International Style. 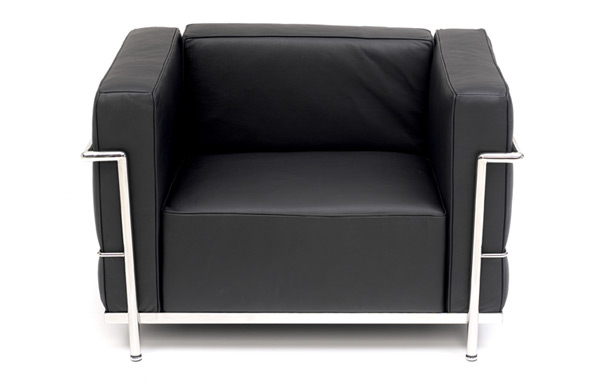 I would now like to go back to the topic of salient Modernist qualities. International Style is a good reflection of these notions and especially representative of the shared Modernist dictum – “The house as a machine for living in.”

The following multi-purpose cabinet shows how an object can also functionalise space, acting both as a storage unit and a divider for the bathroom and bedroom space. Subsequently, a designed space that showcases the relationship between objects by assimilating various interactions between furniture parts, furniture sets and user interaction. 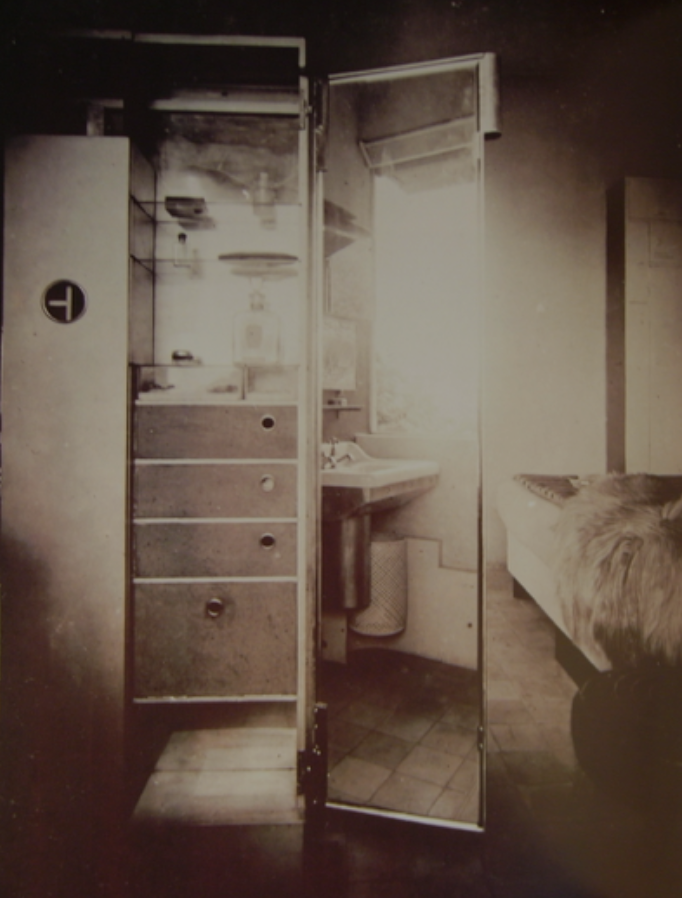 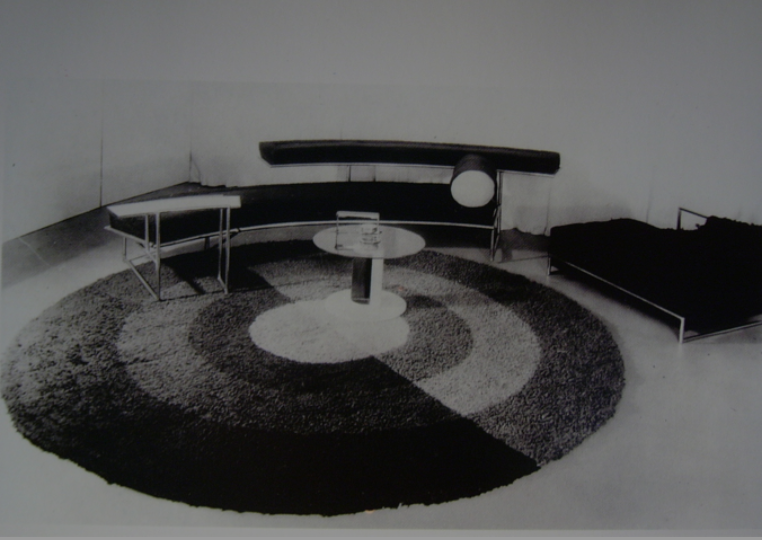 What is left of Modernism today? We are currently in the age of Post-Modernism, and function comes and goes in the products in our market nowadays. It could have been the restrictive obsession of Modernism that made us grow sick of the discipline in design. Post-Modernists do not identify with the Modernists nor any other movement per se. We are at the cusp of liberation, and as we edge towards a free world, we give ourselves the freedom to explore the possibilities that our predecessors had overlooked with their motivations. We are deconstructing and reconstructing, exhausting the potential of design and expression to push ourselves to the next level both physically and philosophically.