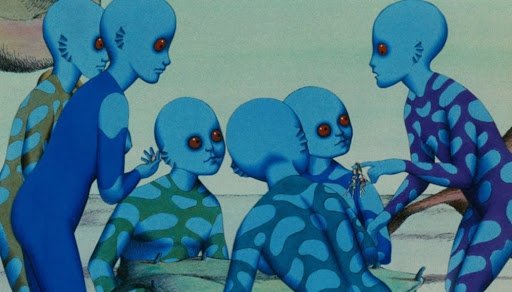 René Laloux is an animator and director from France, who is most well-known for his bizarro animated films from the 1960s to the 1980s. Laloux’s animations were considered ahead of their time and unmistakably characteristic even today. His most representative film, Fantastic Planet (La Planète Sauvage, 1973), is still frequently screened and widely recognised as one of the hallmarks of the bizarro genre. Laloux’s films remain relevant with its unconventional approach with commentary on societal issues arising from money and power.

Fantastic Planet is one of my most referenced work, mainly because of my fondness towards the bizarro genre. The format is closely related to my interest in designing characters of human likeness but parahuman form (humanoid). It can be noticed that Laloux’s characters, while of a different species, bear heavy semblance to our familiar lifestyles. Laloux works with the notion of dissociation to allow the audience to consume the behaviours in his films from a fresh perspective. Beyond their parahuman forms, these creatures align with the behaviour of human beings, providing a depth to the understanding of the character through familiar cues.

Laloux is consistently meticulous with the art style of his animations, particularly using a distinctly intricate frame by frame pencil shading technique that gives his work a humanistic flair. Hence, the bizarro world that he creates through direction can come off less distant than the usual fantasy backdrop. He is also thoughtful with the narrative cues, often using unusual colour schemes to match the allegory in each film. Laloux writes a narrative that is unafraid to stray from traditional linear narrative models. Despite being criticised for the lack of a linear plot, I appreciate his “slice of life” approach that allows us to explore the seemingly humanoid universe and draw parallels with our own lives taken into a different context.