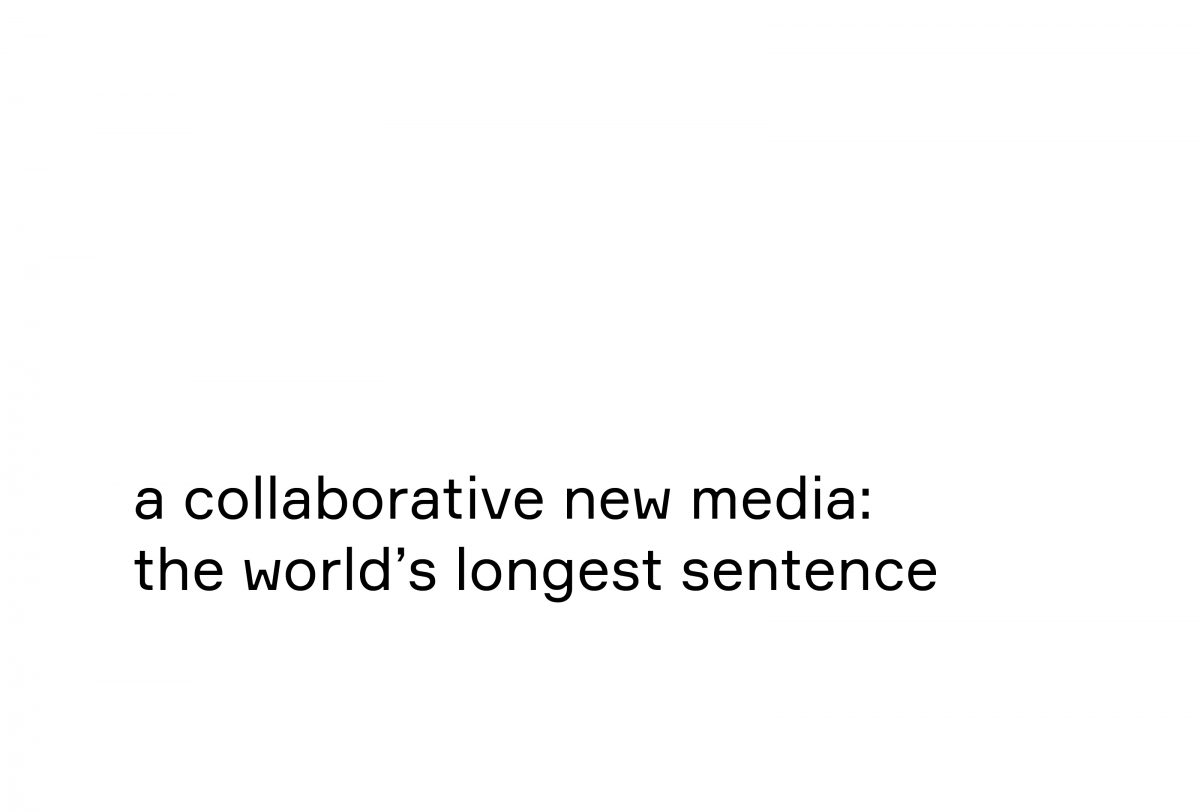 The World’s Longest Sentence is an interactive art piece that is enabled by the collaborative contributions of the audience through a website. The site instructs them to “continue the sentence” by submitting material of varying type – including text, image, video and sound. The audience member is unaware of what precedes in the sentence. I contributed by submitting the phrase “to continue the sentence”. This phrase will then be published at the back of the running sentence on the website.

Generated is a long running, haphazard sentence of all languages and slang. Oddly enough, we are able to make sense of the different fragments contributed, and the stark coincidence in some pieces is compelling to watch.

Narrativity takes on new meaning and form in networked practices, through collaborative, many-tomany systems of writing, media making, and other forms of online expression. In connection with open source thinking, the collective narrative is a sharing and open exchange of conversation, ideas, information, and media that leads to a synthesis of voices: forming a common thread among peers.

The piece is a social media that synthesises the communicative language and thought of a multitude of audiences, creating what seems to be a collage of a narrative. By collapsing our differences as such, and enabling our sentence to tally, the artist has put forth an incessant stream augmented reality; a third space whereby our differentiated thoughts are able to tell the same story. In one read, we are able to experience the narrative from a plethora of physical angles and make sense of them in a metaphysical space of cognition.

The possibilities of peer-to-peer authoring of the collective narrative is now native to our writing tools, such as Google Docs, Microsoft Word, and WordPress, in which multiple authors can coauthor and collaborate on writing projects, often in real time. This dramatically alters the act of writing and narrative, from the singular activity of a very personal form of individual expression, to a collective activity that is highly collaborative: all publishable instantaneously to a global audience.

Much like collaborative online systems such as Google Drive and Google Docs, The World’s Longest Sentence allows for multiple users to co-author a narrative. What differentiates it from such softwares is it’s provision of instruction to allow for live collaboration on a much larger scale. The instructions narrow function as facilitators for the users to move in the same direction when participating in this extensive narrative.