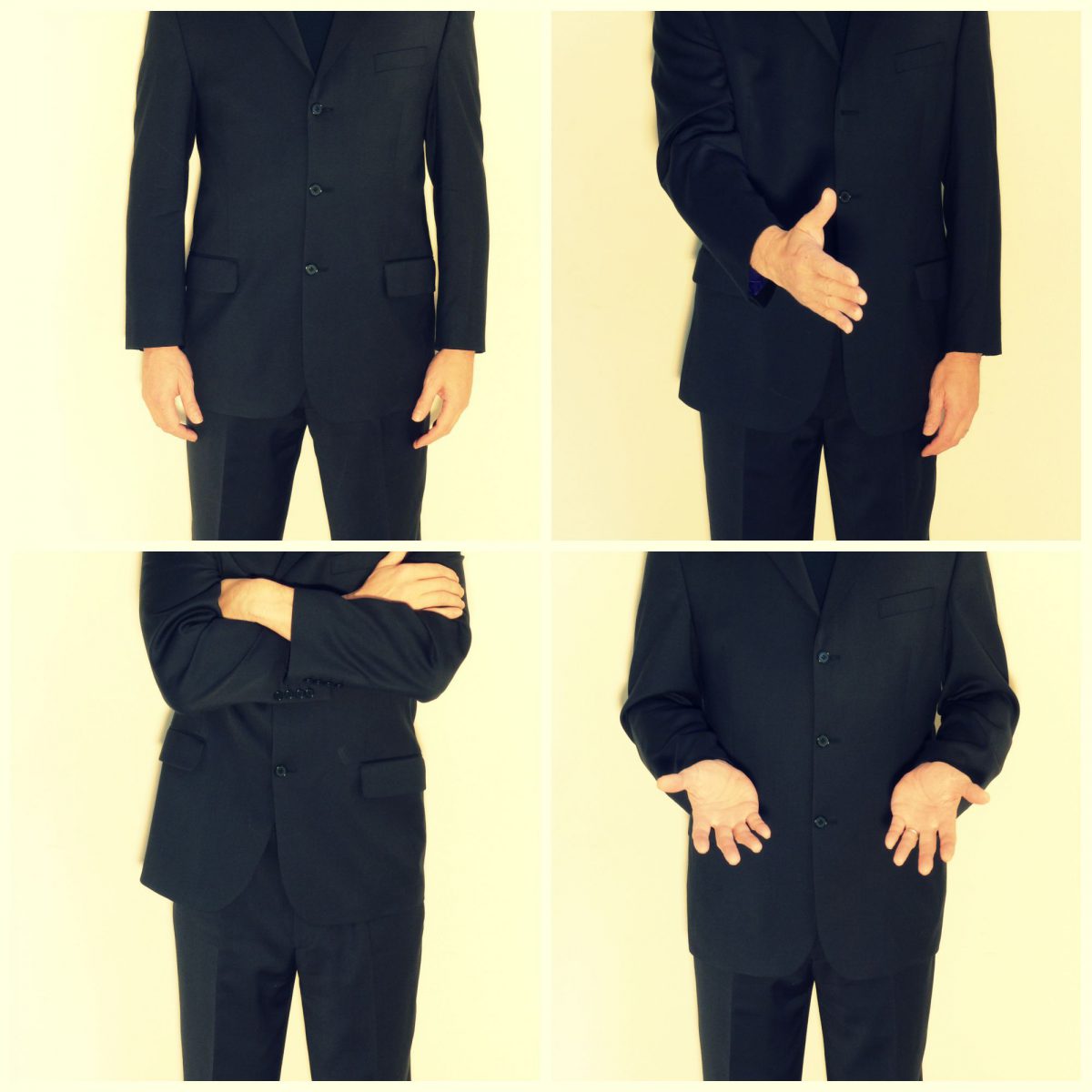 As humans , we all grow and learn differently. Scientists and psychologists have developed a number of different models to understand the different ways that people learn best. One of the most popular theory, the VARK model, identifies four primary types of learners: visual, auditory, reading/writing, and kinesthetic

The body is a communication tool by which is carried out through body language.

Body language is the conscious and unconscious movements and postures by which attitudes and feelings are communicated.

these expression are universal 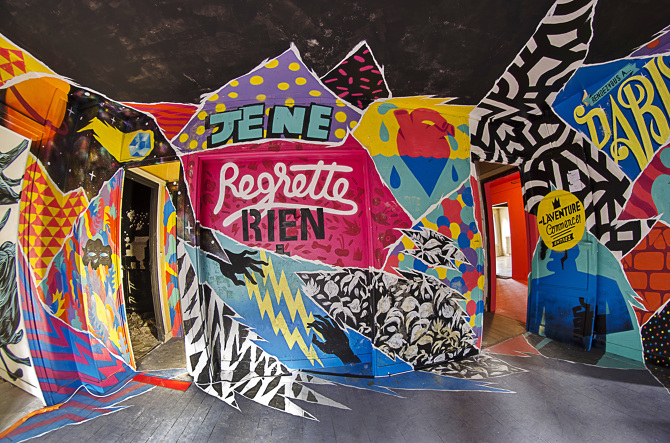 Manifesto: To appreciate movement and the body’s need to move freely.

Aim: To get people aware and take their body seriously. Body expression is also a form of communication.

Visual Mood board and ideas : 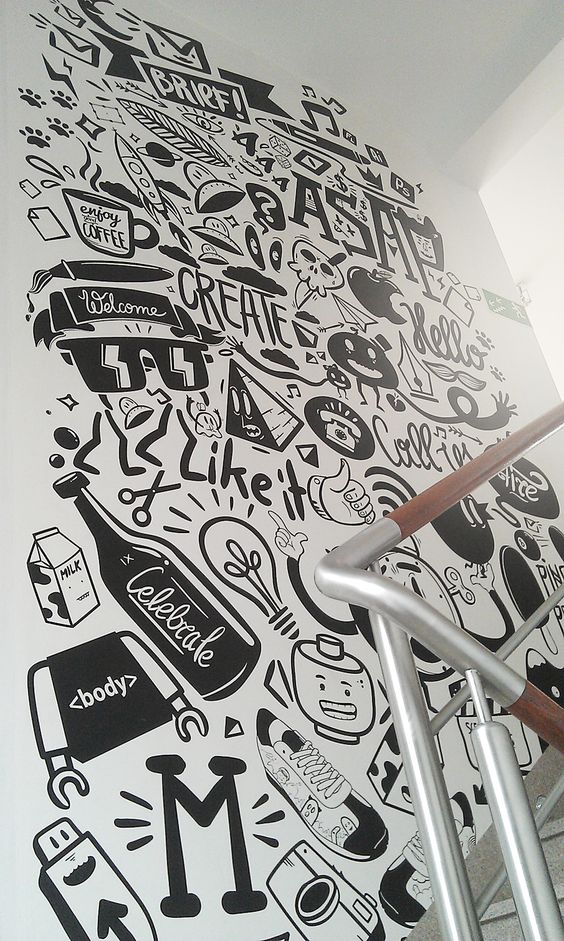 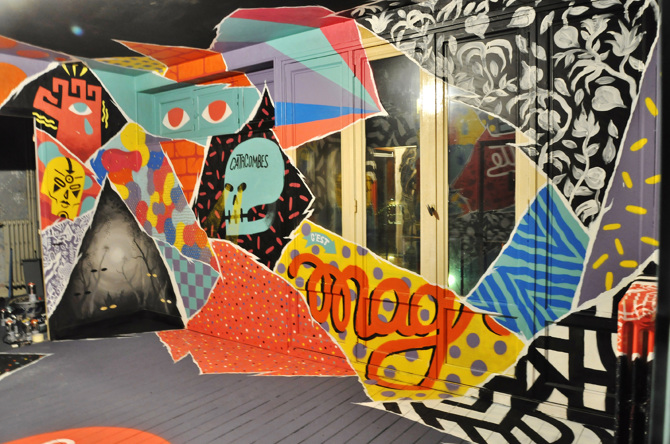 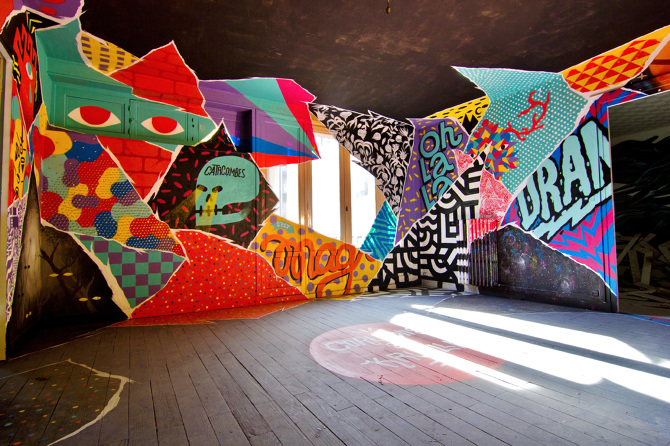 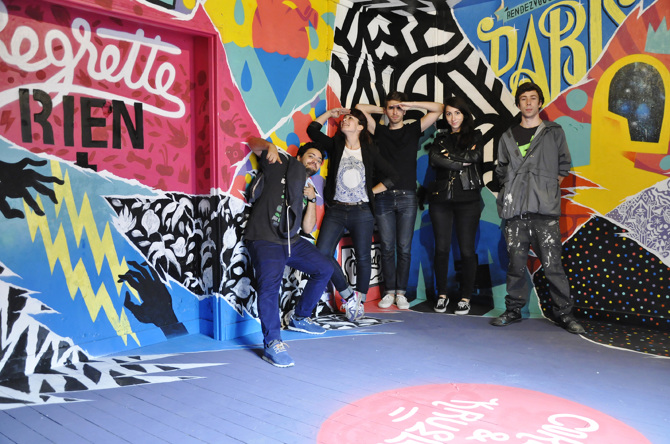 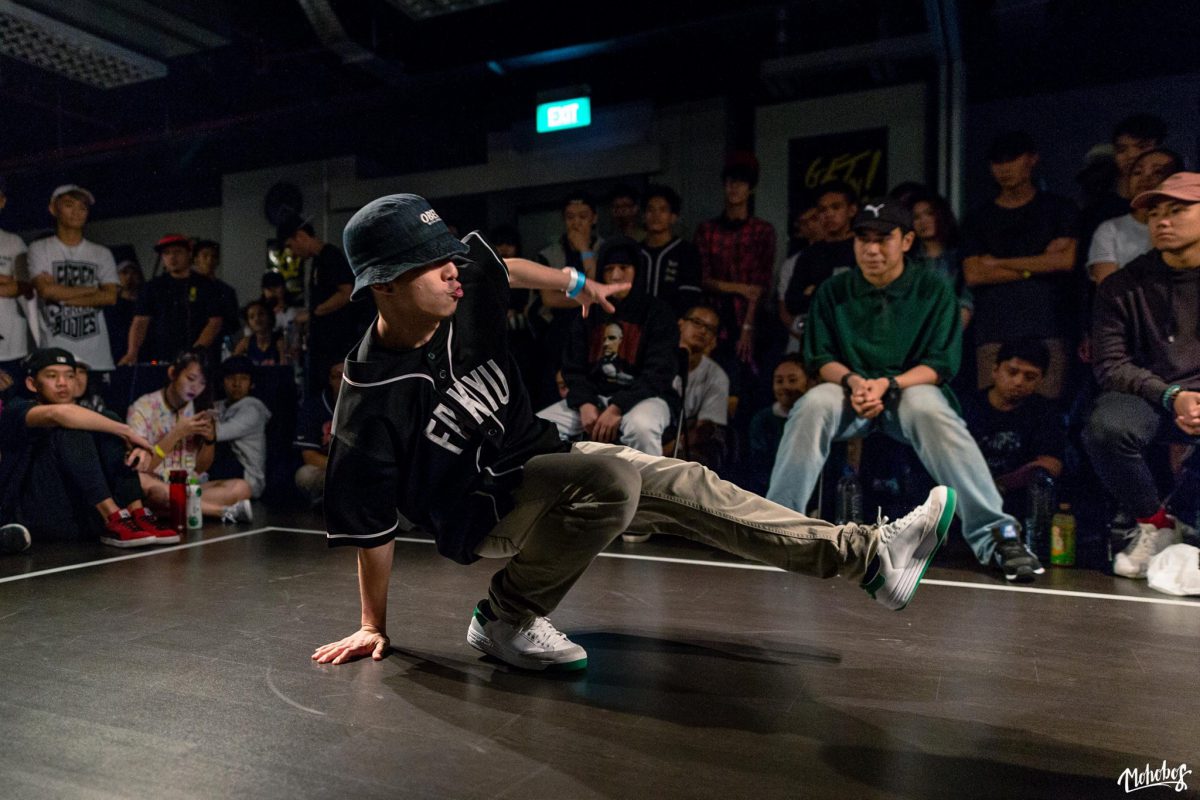 The Street Dance Culture in Singapore. A dissection. Just a bunch of research, reflections and issues!

Street dance is the term used to describe vernacular dances in an urban context. Vernacular dances are often improvisational [ Freestyle] and social in nature, encouraging interaction and contact with spectators and other dancers. While many associate street dance culture with the Hip Hop Scene , street dance culture consists of a mix of other dance genres such as Popping ,Locking , House and Waacking. Though it is notably true that it was through Hip Hop that Street dancing was popularized.

But before we can dissect the issues of Street dance Culture in Singapore, we must first understand its history and the stories behind its birth. Below is a documentary of the beginnings of Hip Hop and how it has changed over the years.

Hip Hop was a revolution and a peaceful one at that. Here’s another link on the history of Hip Hop , and the evolution of the street dance culture!

So as seen in the documentaries above , the essence of street dancing is not just a form of art but its more cultural than anything. For the OGs [Original Gangsters – A term for the first generation or people of a particular style or gang] the Hip Hop culture saved them from the violence and destruction that was common for the people in the Bronx. So one can only imagine how significant and important it was for the people living there during the 1980s. Afrika Bambata , turned from being a notorious gangster to being the founding father of Hip Hop , a culture that stood for peace , Love , Unity and Having Fun through the means of four forms of self expression. Also Commonly known as the four Pillars of Hip Hop.

These are Graffiti , B-boying [Dance] , Rap and DJ. These forms of expression enable the artist to express themselves though different mediums .

Visual aesthetics was expressed through Graffiti.

Body awareness and movement was expressed through dance.

Poetry ,philosophy, language and thought was expressed through Rap.

And lastly , rhythm and music was expressed through DJ.

All these allowed anybody to “fight” with each other without the violence. Thus, it is so, that Hip hop was as much way of life and a way out of violence back then. For some, especially the OGs who are still alive , it is Still so.

Jump forward 20 -30 years and Hip Hop has taken over the world. Different cultures have uniquely adopted Hip Hop and evolved it into something they can own. [ie. Street dance culture in Korea is very different to the street dance culture in LA. Just google it.] However, the key essence of the culture still remains the same throughout, social in nature, encouraging interaction and contact.

Through dance we express and focus on the voice we wants to bring out. Should one be into the Hip Hop culture, they will realize the need to have a backbone when it comes to an opinion or truth, is essentially crucial.

If you are a Lioncity kid, You’ll have an inkling where this is headed. Singapore isn’t very well known to be too expressive. Most locals know that we rather keep to ourselves in the comforts of silence and its sadly, very typically Asian.  We are told to follow the rules and behave within a social norm as if all cultural rules made any logical sense in

such a globalized world. I cannot comprehend how much richer the Singapore dance culture would be if we didn’t have these Culturally-imposed-everyday restrictions. Everyone knows that the only way to grow is to be uncomfortable. So sometimes breaking a social norm , that’s not against the law, would do us really good.

Dancers have also been chased away on occasions too. Below is a thread that mirrors the claim above. [ A screenshot of a conversation started by a well known street dancer in Singapore.] 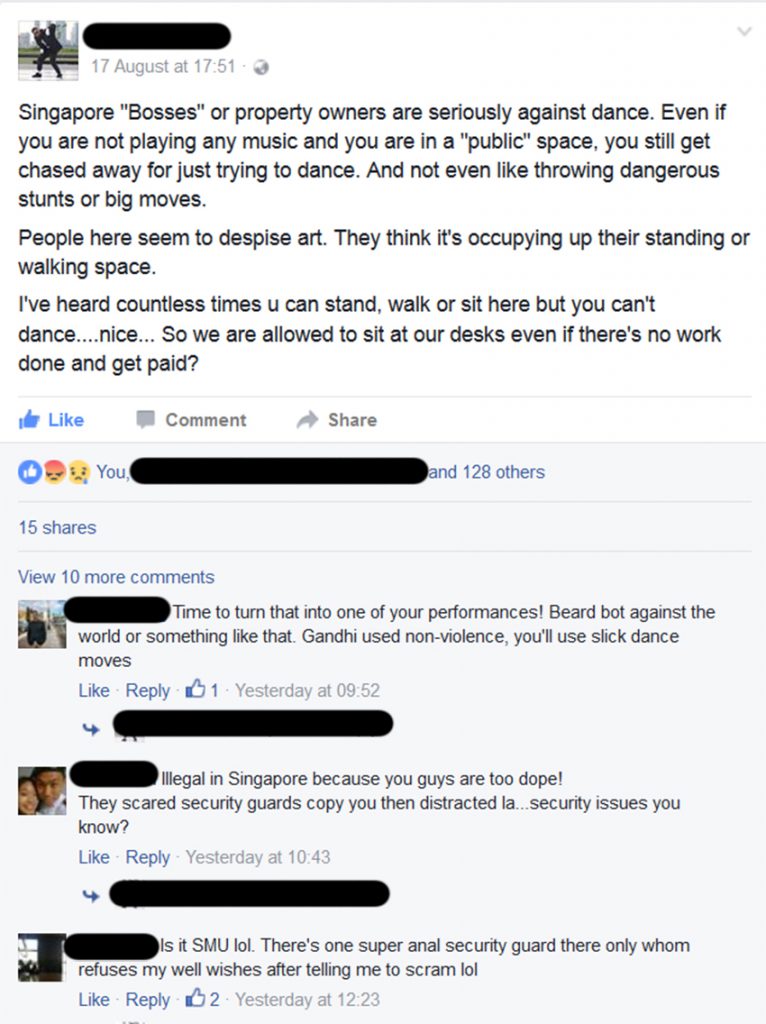 Apart from the strict rules about what we can and cannot do in public spaces, another reason why dancers may not want to dance on the streets is because they are shy of judgement from other dancers and passer-by. As a street dancer myself, one of the frequent questions I’ve been asked is “Don’t you feel weird dancing in public like that?” most of the time it implies that it is weird to dance in public. Rather , that I am weird to dance in public. So it seems that the push for street dance to be done on the streets is not merely for tradition’s sake, but rather for statement and personal voice. Essentially, street dancing is tantamount to performing for a public audience and that requires immense confidence and emotional strength. If dance is communication then shouldn’t it be important that we have such confidence?

So a few question are , should the traditions and essence of the street dance culture be respected and kept? or should dancers adhere to what is expected within Singapore’s social culture?

2) Choreography , Freestyle or both? : Dance to me is a communication. You could say a choreography is like an  essay that is planed and written while free styling is more of a casual talk with friends and the everyday chit chatter. Both are important and both are useful, but not mutually exclusive. Yet there has been a lot of flak between the dancers in the community. Usually, dancers either stick with choreography or freestyle but rarely both. So this is an issue worth investigating, after all, dance IS dance and should dance be pursued as an art , one would think to perfect it in both areas to the best of one’s ability.  I notice a lot of politics in the scene of what is considered dance Culture or not. And also questions raised about weather the new style is an elevation of the old or just “Trash” as some of the OGs have already stated. Where exactly do dancers draw the line when it comes to genre? When asked , many of my dancer friends would state that as long as one would be happy, let them dance the way they want to.

3) A mere hobby . an Art or Career ?  : Another issue raised is about the appetite of dancers today for learning and improving. As seen in the documentaries shared above, the street culture was a reaction culture and when people wanted to learn and improve, they would have worked hard and cherish whatever lessons they could get because unlike today, classes and dance events were not as easily available as it is today .

This was quoted in a recent blog post by Marzipan , a well know street dancer:

“I don’t rant that often on social media but here is an exception, there’s one thing that’s really bugging the hell out of me right now and that is the state of the street dance scene in Singapore. Yeah it’s all flowery and good and everyone is happy right now but here’s the thing. That IS the problem- where is the struggle, the hardship, the tears, the sweat and blood?

Yin and yang is so important in this world and if you are in a relationship with only smiles everyday, you know there’s something not right and waiting to blow up. The “new” generation is now built on a bed of roses and given so much support, guidance, positive words and sweets that they forgot what it’s like to be hungry. Maybe it’s our fault for indulging them. Maybe it’s because we grew up hungry ourselves that now we are stuffing the new generation with food for thought.

A hungry man will fight harder than anyone else for a piece of the pie.

We are being served so much that we don’t care about food anymore.”

Perhaps other questions to ponder about are: Is having so many dance classes at the fingertips making dancers of today less driven to work hard and push themselves during classes? Have dancers started to rest of their laurels? Should a hobby be an excuse to not do the best we can?

4)The representation of women: This perhaps is one of the main issues I would like to focus on. Based on personal experience, many female dancers have expressed that the “Battle grounds” is an unfair playing field, stating that men are equipped to be physically stronger and therefore better at dance. I for one, would disagree about the strength because girls have already been proven to be able to attain strength that is equal to men, no doubt that is subjected to differ on a case to case basis.  Also another reason as to why I would disagree would be that the quality of dance should not and cannot be defined by strength alone.

Yet, in the hip hop scene, girls win lesser and I suspect it is not due to a bias , where men are being preferred but rather due to another form of cultural resistance. Asian girls are expected to be demure and feminine. I have been told many times by my mother that the way I dance is very “rough” and “aggressive” and more so , I have been labeled as “one of the guys” because society believes I am “manly” when I dance. Despite the fact that I am considered quite feminine in terms of the Hip Hop culture. It is obvious that the definition of femininity clashes head on when the Singapore Culture is introduced to the Hip Hop Culture.

From what I see, most girls in Singapore prefer to dance genres that emulate femininity.  Genres such as street jazz or waacking is considered more sexy and girly.  That being said, I cannot help but ponder if the preference of female dancers for such genres is shaped and somehow subconsciously dictated by a cultural construct.

I also wonder if females who do battle with Hip Hop lack confidence and hold back their full potential because of the narrative that females have to be demure.