Just putting it here for recording purposes! Will work further on the project idea.

Idea:
Labyrinth
My idea comprises of a physical maze, where a projected image of the user running will be projected on the physical labyrinth itself. The aim of this game is to catch the doll in question, which will physically be present, and mobile via the use of motors, in the labyrinth using sensor-automated responses. Upon reaching the end goal of catching the doll, the doll will stop moving.

Project mapping will be conducted on the doll in addition to the user’s running figure, to give the doll a living feel (as we project her face, and her various emotions) in an attempt to increase feedback given to the user. The longer the user takes to catch the doll, the more the doll’s face will morph unrecognisable.

The doll’s facial features will be inspired by the Japanese wooden doll. 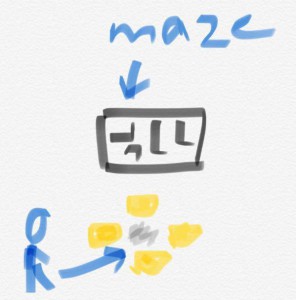 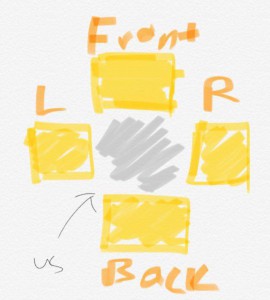 Projection mapping of the user will comprise of a stored footage of a human stick figure (the avatar). In order to trigger movement of the user’s avatar, the user has to stand on 4 square boxes, similar to the dance sectors of arcade dance games.

Feedback:
– find a reason why the doll moves
– Reason why you want to mix physical & projection together
– Maybe buy remote control call put doll on it (easier to do than Programme it)
– Control the maze will be an issue
– Maybe the maze will be projected
– Sphero ball to replace the doll. SDK. SPRK edition, figure out how to access the code
– Feedback when touching walls etc