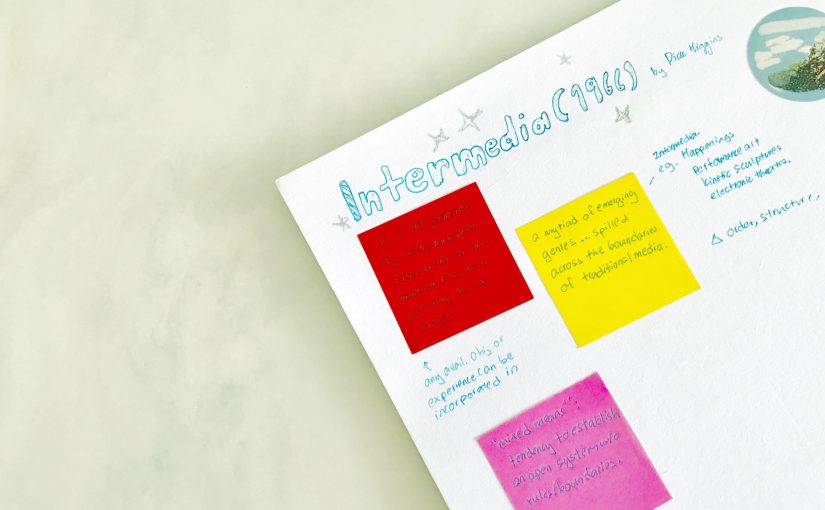 NOTE: this essay requires editing and will be done so at a later date (by the end of this weekend).

Overview
The Intermedia (1966), a term coined by Dick Higgins, refers what it calls “a myriad of emerging genres that spilled across the boundaries of traditional media”, or in essence, mixed-media forms. Various art forms which we are gradually getting familiarised with – performance art, sculpture and electronic theatre – continue to resist the categorisation of traditional forms of media.

Here is my take on Higgins’ essay: his words are gold, but perhaps not so much in the modern era of 2017. However, underlying the text, there is a persistent cry to push the boundaries for progress, an underlying human societal quality.

Divide and (not) Rule
Higgins’ suggestions tread a fine line whereby he purports that simple combination of different mediums to yield good results, as the sum of its parts make up a better whole. It might correctly mitigate the issues brought about by limited categorisation yes, but at what cost? He fails to highlight that such appropriation should be done carefully, keeping in mind that it risks end up like a ridiculous chimera.

Perhaps, during the 1966, Higgins tried to construct an entirely new artform which might be pioneer of his time. In recent years however, it is gradually being more accepted and conducted, leading us to go back to the basics and question: so what is art? Higgins claims that with the collapsing social classes and tastes, he hints that art is now for the masses. It leads us to think if art is gradually becoming more for the masses, with a one-size-fits-all approach. Is it? We can only know for ourselves.

The Era of the Mixed Media
With lower barriers to entry, without the need to categorise one’s art. As Higgins’ metaphoric story where he suggests that the traditional art ‘is protected by a handful of rude footmen who seem to feel that this is the way Life will always be (29)’. Perhaps, as the Intermedia is a step out of one’s comfort zone, that is precisely why it remains tough to convince others/the audience to adopt it. It marks further proof that the audience and artists are continually intertwined – does that not mean that by utilising MORE mixed, physically made objects with a more visual message (away from abstraction), it becomes easier for the artwork to reach out to the common masses?

Likewise, this ties in with the previous point on the changing needs and outcomes of art, which inevitably lies in the intermedium.

The Art of the Intermedia
Higgins ends his essay on a positive note, suggesting that the ‘use of intermedia as a form of continuity, rather than categorisation’. I agree wholeheartedly with it, for intermedia should not be another category – for that will only further perpetuate the categorisation dilemma – but rather, spark an inclusive world without category, for only if we can achieve that could we finally live in a world as what Higgins envisioned it to be.