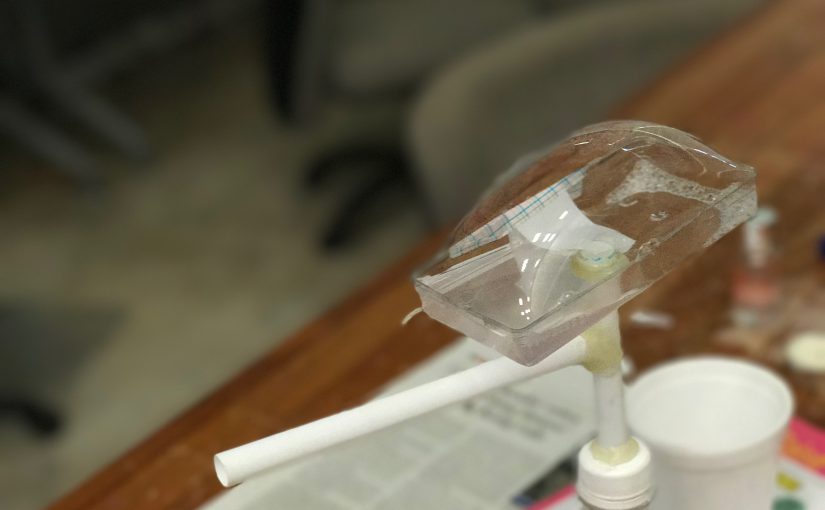 Overview: Creating new Set-ups
This was a week of toggling with equipment, with the intention of coming up with the final installation setup. I decided to just go back and focus on projection on bubbles. To do this, fog is required, to make the bubble opaque enough for projection to shine on it.

Thus, I tried to make my own fog as buying a fog machine would be much more costly. It was a failure.

This experiment’s step by step tutorial was taken from here.

In brief, the experiment required,
1. Creation of fog juice (mixture of distilled water + glycerin)
2. Other materials: aluminium tray, heat source (candle), bottle ‘cover’
3. Place fog juice onto aluminium tray, and bottle cover over
4. Heat it up, fog should be evaporate from aluminium tray

As seen from the video, the resultant fog was near negligible – and in fact, this was the best videos I managed to get. Despite upping the glycerin amount in the fog juice, there were still no fog produced.

The experiment was a certified failure – how now? I would like to scrape the idea of utilising projection onto bubbles directly, and cut out the need for fog bubbles.

My original intention was just to combine bubble blowing by the user, and create a singular platform for one single bubble to stay on. This bubble ought to be a fog bubble, with fog blown into it.

After creating the fog bubble, projection light would beam images on it and create the effect I required.

Needless to say, this was a situation where the ideal was way better than the physical. The water from the tray kept dripping down the straw onto the fog juice tray, bubble-blowing was an arduous and unhygienic process, and the entire structure as a whole just was not appealing and stable.

Thus, I did entirely scrape this idea as it just was not working, and did not see how it could further develop.

I thought of creating a tinier installation, and contain just one bubble for now as it might be easier to work with. Thus, I decided upon a boxed installation – partly because I started becoming interested in peephole art installations – and also because it was much easier to control the environment within a small, contained space.

The intention was for the user to blow and create one bubble at a time, which float inside the box. An external camera will capture the facial expression of the person blowing the bubble, and project that static image onto the bubble. The bubble was meant to gently float down towards the ground, as I would be placing liquid into the box to greatly reduce the speed the bubble floats down. The user will proceed to look at the bubble through the peephole on the right of the box, as I envisioned that it would greatly magnify the bubble’s size in the eye of the user, and have it easier to contain within a smaller box. The person thus becomes the bubble, and he fitnesses his own death through the bubble.

At the same time, as the bubble floats down and vibrates/moves, a recorder will record the movement and sync it to a sound, which would vibrate according to the bubble’s movement.

Thus, I tried making a box structure to first test out the size.

As the programming for the facial recognition, and sounds were not finished yet, I just decided to cast a simple video projection pattern onto the box, and test out the effects on the bubbles.

Also, though I intended the bubbles to be like these (see below),

due to the set-up structure, I could at most manage a large bubble or two, like this (see above).

However, I realised that the quantity of light given out by the projector wayyyy overpowered the bubble, and reflected itself at the back of the box. Also, the bubble was exceedingly fragile, and with the small size of the box (and hence short height), there was not enough space for the bubble to poetically flow down as I had wanted it to. The reflection on the bubble, needless to say, was an extremely poorer version out of the many reflections I obtained from my previous experiments.

I received several feedback, that perhaps the peephole was way too small and insignificant to push through the intricacies of the bubble projection, and I could perhaps use a different camera to capture the reflection and re-project it on a larger screen. This way, it would make it easier to look at the projection, and allow a larger group of people to look at it.

Another feedback I got was of hygiene – having visitors to blow through the same tube was unclean, and I did consider providing disposable plastic ‘mouth-guards’ or disposable plastic blowing tubes. However, it was way easier to just alter the bubble blowing structure and make do without this problem.

This idea, though it sounded good theoretically and I was genuinely interested in furthering it, had to be largely tweaked for it to work.

After these experiments, Prof and I found out that the bubble could be used instead as a reflective surface. As seen in the below images, the reflection off the bubbles created a surreal, living image.

Thus, in my future outcomes, I will be utilising this reflection of the bubble as, 1. it’s much easier to manipulate, and that 2. I love the effect.