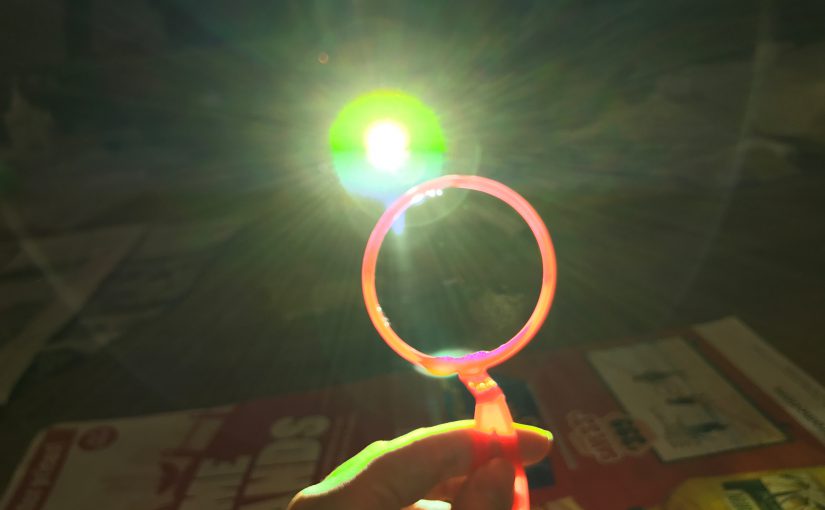 Sooo… I was considering how to move on. I constantly toyed with the idea of making projected bubbles, very much like this – but soon hit a revelation: while yes its perfect, that the outcome really embodies what I truly want, I would like to investigate another more appealing aspect of the bubble medium: reflections.

From the start of my experimentation stage till now, I have been fascinated with bubble’s reflections; the multi-coloured hues swirling in circles, glistening and changing colours at whim: it was utterly beautiful. The week before, Prof Randall actually showed that the reflective surface could actually be used as a projection surface, though, in a different way as seen in the video itself.

Prof Randall highlighted that viewing the reflection on the bubble itself might be hard, and that I could utilise another projector to enlarge the initial projected surface (such that the final look can be seen on say, a projector screen). To this, I felt pretty unsure about as I did not want my final installation to look 2D (aka like watching a television show), and that the interaction did feel slightly disconnected from the outcome.

I knew what I wanted, I wanted the reflected image to be tangible. Something you could actually see it in 3D rather than a flat surface. Perhaps, one could see it via the physical object which creates the final outcome, or the may the outcome be more ‘real’ (for the lack of a better word).

What I do want though, is for the bubble surface to no longer be a sphere, but a ‘wall’ of bubble. This would allow for a greater area of projection and logistically speaking, makes it way easier to control than a spherical bubble which bursts more easily.

Thus, I went to do a quick search of the different kinds of bubble ways, and stumbled upon a few interesting ones:

This photo of Ontario Science Centre is courtesy of TripAdvisor

This photo of Kentucky Science Center is courtesy of TripAdvisor

The medium of bubbles is an interesting one, it has both a scientific basis, and can even be used as a part of a performance, as seen by bubble artist Fan Yang.

I did mention that I wanted a wall of bubbles, but for now, I am going to start by making little round wands, tied by strings to the ceiling and lowered down at chest-level . The rationale behind this height was for visitors to be able to actually blow and play about with the bubbles. In the future, I would like to change the opening shape of the bubble wand but for now I will stick with this to experiment first.

As you can see, there’s a tray of soapy water. It is intended so for the user to be able to lower the entire assortment of wands into the soapy water by the use of a manual hand lever/pulley system. I want to be able to automate this system with time to come, but would need to consider how so, and the duration/trigger to lower the entire wand set.

As for the sounds, I wish for the sounds to be edited real-time – hopefully, the bubbles’ vibration speed/actions can be translated into sounds for the installation itself.

This would suffice for now, as I attempt to create my prototype on it (to be continued in the next post).