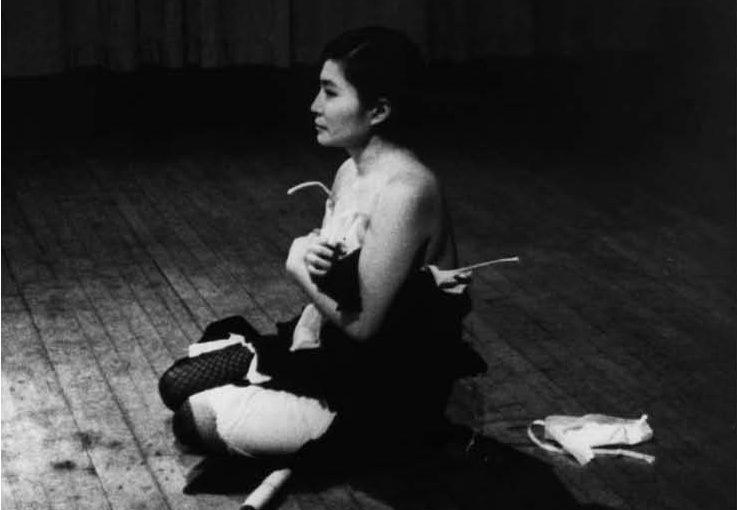 Cut Piece by Yoko Ono is a performance piece first performed in Japan in 1964. In the piece, Ono sits on the stage wearing a black dress with a pair of scissors, and invited audiences to come up and cut her clothing one at a time. She remains passive, subject to the different reactions of the audience participants. Slowly, as her clothing gets chopped to pieces – almost revealing her chest – Ono holds up the leftover pieces of her bra to protect her modesty.

Indeed a thought-provoking work, that is only realised from the interaction between the artist and the audience participants, Stiles argues that Cut Piece:

‹Cut Piece› entailed a disrobing, a denouement of the reciprocity between exhibitionism and scopic desires, between victim and assailant, between sadist and masochist: and, as a heterosexual herselft, Ono unveiled the gendered relationship of male and female subjects as objects for each other.

The silent artwork becomes an intimate encounter, between the artist and the audience participants. Parker states it clearly, Cut Piece becomes a

radical critique of the role and treatment of women in society in which collective audience interaction produces a powerful narrative of control, invasion, and exposure.

On a similar wavelength, Randall states that,

Works such as Cut Piece precede later examples of networked media art that involve not only audience participation, but many-to-many interaction between viewers.

Not only is the outcome of Cut Piece ‘published instantaneously’ to the local audience, and art no longer subjected within the sole execution of the artist, art becomes an item which is highly collaborative. In the changed environment where the lines between artist and audiences are gradually becoming blurred, art becomes more accessible, heralding a new culture where social etiquette and art forms are altered.

With regards to the later Experimential Café, both works operated on a platform differing from real-time collaboration, but on similar premises. In this case however, despite a digitised medium to allow one to rid physical harm such as the case of the online Café, Ono knowingly took on the risk in her art, further challenging the platforms of art, and the societal act of interacting, and understanding art, while presenting her body as the object for the purpose of art.