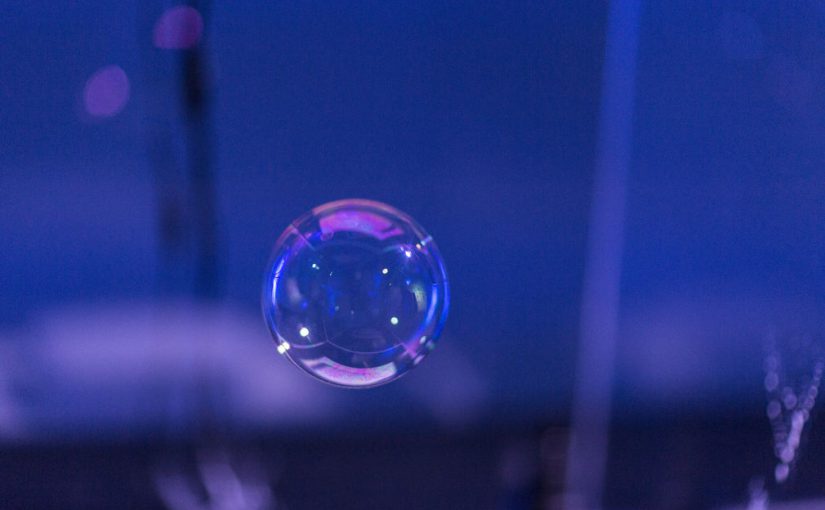 Artist references which may give ideas and feedbacks to kickstart my ideation process.

Inside a dark room, bubbles filled with fog slowly drift ground-wards. Projected on it are flickering image which are a symbol for dreams which as quickly built as they are destroyed.

The creators were investigating light as a design element, and saw the artwork to symbolise the relationship between dreams and wishes.

Personal Opinion:
The absolute brilliance of their artwork was of how the fragility of the bubbles was highlighted, and transformed with the addition of the projected light. Their artwork becomes a key learning reference for the technicalities of projection – the bubble medium itself is way too thin to be a suitable projection surface; there needs to be a ‘film’ of slightly opaqueness for the light to fall on. Particularly, when the bubble burst, the artwork was arrestingly beautiful – the bubble’s destruction was purposefully amplified and it faded away.

Their artwork also reminds me of the multiple possibilities of using equipment, such as IR light within a dark room to assist with position mapping.

The mechanical arm squeezes a bubble out, and the predetermined settings in the container attempts to keep the bubble alive for as long as possible. Friedrich mentions that the artwork was her scientific and technological take on the vanitas symbols (momento mori?), where the project looks like a scientific project where the bubbles exist between the states of death and existentialism.

How Artwork was created:

I could not exactly find much information on this, but I assume that Friedrich used a pump manually lubricated with soapy water (the lack of a container for soapy water is obvious). A robotic arm manually squeezes the bubble out. However, Friedrich mentioned that the physical quality of the bubbles had to be altered to increase durability. As for the controlled environment, I suspect it’s to do with temperature, humidity (where colder environment and increased humidity dries the bubble out slower, hence it lasts longer) and wind conditions, to set the bubble at the exact spot where conditions are the most optimal before it slowly floats off route.

Personal Opinion:
I thought this was simply brilliant, and it opened my eyes to the possibility of using only one bubble for the whole experiment vs repeatedly many. At the same time, this project remains very simple and elements are stripped down to the bare minimum – instead of continuously adding in different technologies, perhaps I could focus on the skeleton first? I think this would be very useful to me right now when I have not much ideas on how to create my own project.

Interacting with virtual bubbles using your shadows. Your shadow, reflected on the screen, can move/hit the bubbles, and a corresponding sound will be played. This project attempts to imbue the body – an object usually left out of artworks – into the project as a means of interaction. The combined surface of shadows, projected bubbles and the screen itself closes the distance and spatial relationship between the three discreet objects.

How Artwork was created:
1. Bubbles on screen were created using a simulation algorithm, each bubble was paired with a script object which defined its behaviour according to gravitation, acceleration and air circulation
2. Bubbles’ drifting movements were synced to a midi-synthesizer for sound
3. Shadow’s position was captured if it hit above a certain threshold, and if present, triggers a routine whereby the bubbles bounce back
2. User tracking interface was implemented

Personal Opinion:
Indeed, this could be another method of using bubbles and in fact I did think briefly about this idea. However, I felt that the outcome was way too technology-based/impersonal for my liking. It was nice however, to know that such options are available.

Huge black horns bellow out compressed air, which collides with soapy water to create big sound bubbles. The concept was to transform sound into three dimensional space with its presence. As the shape of the bubbles are constantly changing, it is also a reflection of how space is repeatedly getting redefined. Visitors are encouraged to place their bodies relative to the bubbles’ position.

How Artwork was created:
1. Need for horn to blow compressed air
2. Fluid circulation required
3. Horns were 3-D designed
Horns’ pitch were also affected by material, due considerations had to be given