It was a piece of writing that was not meant to be rushed through in a single read. In fact, I had to write out some notes, and categorise the information to better understand it: 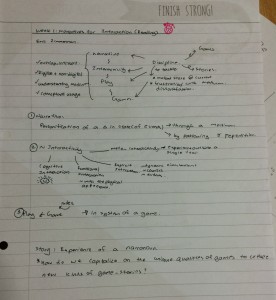 Overall, it was a pretty interesting piece that summarised and clarified succinctly my initial impression of the four concepts.

Assignment: think about 2 topics which you find interesting and that potentially can be turned into interactive narratives, think about what type of interaction would be important for these topics (based on the reading’s definitions), post the ideas on OSS

Regarding the astrology, focusing on the meta-interactivity and functional interactivity would be interesting. The zodiacs, an ancient science, which has both believers and non-believers, and I would like to explore this metaphysical construct of divinity based on astrology. To personify this topic, would be ideal in giving audiences a physical realization and better relation to the topic, inclusively targeting non-believers. This encompasses functional interaction, where perhaps, a change in astronomical signs could change the weather. Explicit interaction would be ideal, where the change in circumstances influence the person’s choices, interspersing with functional interaction.

Topic 2: the daily rituals of life: washing up & brushing teeth

I choose this idea as I wanted to explore a common, Everyday activity, and impose a greater narration into it. I wanted to stretch the boundaries of an action so simple and thoughtless, and test the boundaries of narration. For this topic, it was a discipline that adhered closer to stories than game – a narration that is patterned and repetitive – the action of first grabbing the toothbrush, followed by the steady squeeze of toothpaste on the bristles, culminating in a brushing action of the teeth. It would be interesting to explore a functional interaction, where perhaps, the audience uses his entire body to control the movement (sensed by sensors), by which requires precise & accurate movements. The rule of even a centimetre off would invalidate the movement. Cognitive and explicit interaction could be integrated, where the user makes conscious decisions of the movement, and recalls the actions (which may be scrambled up) in playing the game. However, at this stage, I still feel a sense of dissatisfaction as mentioned by Zimmerman, with my use of the mediums available, and will continue exploring more beyond what I have at present.

However, comments given upon consultation with the professor reflected:

*focus on narrative, rather than the physical output

*astrology as a topic is interesting, but has been widely used

*physical product is possible too

Thus, more effort would need to be put in to further push and develop the ideas.