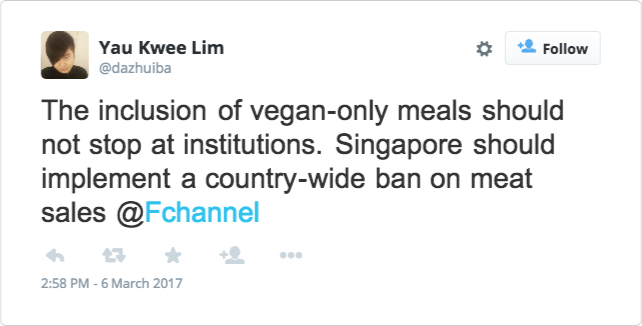 The broadcast was filmed with the intention of adopting a formal news cast style, of a top-down approach from a larger organisation in disseminating information. In the interview, the reporter attempts to imbue real facts and organisations (citing Meatless Mondays, Khoo Teck Phuat and Yale-NUS) in order to set a more believable tone.

With the insertion of fake news at the later half, viewers are inclined to continue believing as the tone has already been set earlier. However, the later citing of fictional twitter users with ridiculous names such as Lim Yau Kwee (Yau Kwee means hungry ghost in Hokkien) and Jia Li At (Jialat is used to describe a disastrous situation [Singlish]) with outrageous opinions, while maintaining a news-reportage formal tone start to become puzzling.

Similarly, propaganda can also be used in a similar way to confuse truth and fiction, and some might believe, instead of critiquing and deciding if its true, or false.

On hindsight, I should have used OBS to switch more fluidly between the different screens.