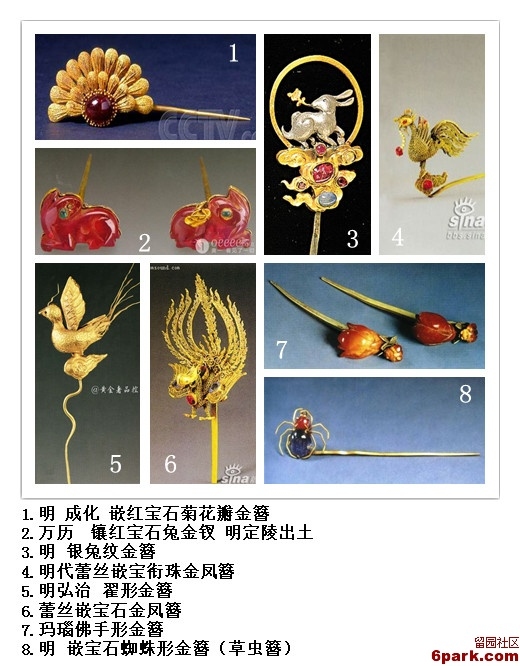 I came across a few articles regarding the different types of hair accessories during ancient China. They more or less are same in content. Here is the brief summary of the information.

There are countless styles of hair accessories in ancient China, just like modern times. It is hard to count every single design, like we can’t give an exact number of different dress styles. Accessories always go with creativity, thus there will always be something different and new. However, all the hair accessories can be categorized into the few main categories below. As the translation of ancient Chinese language is difficult to be accurate, I will just loosely translate the names with descriptions.

Hair pin, in the shape of a long stick. In ancient China, people use it to bun up hair. In Chinese tradition, when girls reach the age of 15, they will bun up the hair with a hair pin. As such, 笄ji is also the word for Rite of Passage for girls.

<礼记。内则>：“女子十有五而笄” Book of Rites. Neize: Girls pin their hair up at the age of 15

<仪礼。士昏礼>：“女子许嫁，笄而礼之称字” Book of Etiquettes. Marriage Etiquette:  When girl is (at the age of) allowed to get married, they will put a ji to bun up hair.

簪Zan is developed from 笄ji, and the usage is almost the same as ji. It is usually made of gold, jade, tusk, bone, tortoiseshell, etc. It can also be used to scratch one’s scalp.

Since Shang Dynasty(1600BC-1046BC), Chinese started to use zan. It serves two purposes, firstly is to set hair bun or, secondly is for decoration. It can be used by both men and women. In ancient China, there are rules that criminals are not allowed to use zan. Emperor’s wives if commit any offence are also banned from using zan. So, zan also is a symbol of dignity.

In Neolithic times(Neo stoneage), until Shang&Zhou Dynasty(1600B.C-256B.C), zan is mainly made of bones. SInce Han Dynasty(202BC-220AD), ivory zan, jade zan, gem embed zan started to emerge. During Tang Dynasty(618-907AD), Song Dynasty(960-1279AD) and Yuan Dynasty(1271-1368AD), the use of precious materials such as gold, silver, jade became prevalent, The techniques also improved a lot to create more delicate and sophisticated designs.

The head of zan(the decorative end of zan)is commonly seen with the motifs of plants, animals, geometric shapes, or other home objects. Most of the designs have auspicious meanings. Sometimes gems such as jade, enamel, coral, pearls are embed into the designs. The use of zan is also strictly going according one’s social status. The best and most rare materials are always used by royalties. Dragon, phoenix motifs are exclusively for royal family, specifically, the Emperor, Queen Consort to Consorts, Empress Dowager.

As mentioned above, zan can be used functionally and/or decoratively. For function use, zan is used in the same way as ji, where it is inserted into the bun to stabilize hair. For decorative purpose,  it can be used in more versatile ways, in different parts of the head.

钗chai basically is two 簪zan combined together, it is used to hold hair, or can be used to pin the hat on hair. Zan always have two pins, or sticks, instead of just one pin. Zan is not only an accessory but also a symbol of love, probably because it is in pair. In ancient China, between lovers they will split a chai at farewell and each person keeps half. When they meet again they will combine the two halfs into one.

辛弃疾<祝英台近.晚春>：“宝钗分，桃叶渡，颜柳暗南浦”<Zhu Yingtai jin.Late Spring>:”Split the chai, At Taoye Du(the place of farewell), fog is covering the sight of the willows, the scenery at waterside is very desolated.” However, this poem is using an metaphor to express the poet’s sadness of leaving his motherland.

步摇Buyao is an extension of Ji, Zan, and Chai. It had large variety of designs. One main character of Buyao is that it has some mobile part that can moves when the lady walks. It could be tassels or spring-like parts, chains or anything that has certain mobility. Hence the name came as 步(bu,walk) 摇(yao, move).

Just for reference and get an idea how Buyao looks when wearing. You can watch the video starting at 10:16 when the Consorts are talking with each other. Personally I think Buyao is one of the hair accessories that emphasize on feminine aspects the most, making women look more demure and gentle, with subtle sexiness. The drama and costume generally respects Chinese History, including the color of the attires, the design of the jewelries, the hairstyle. You can find a few types of hair accessories I mentioned in this post.

<释名.释首饰>:“步摇上有垂珠，步则动摇也。”<Late Han Etymological Dictionary. Name of accessories>:”Buyao has dangling beads, when walks it will sway”

白居易<长恨歌>:“云鬓花颜金步摇，芙蓉暖帐度春宵。” <A Song of Immortal Regret>by Bai Juyi:”She had a florid face and cloud-soft hair adorned with glittering golden beads (Buyao) that swayed,
Behind bedchamber curtains painted with lotus, springtime passion was in play. translation:https://28utscprojects.wordpress.com/2011/01/15/071/ last access 30th August 2016   This poem is used to describe Yang Yuhuan, also known as Yang Guifei, the most famous Imperial Noble Consort of Tang Dynasty. She is one of the four most beautiful women in Chinese history, and is also blamed for distracting and interfering Emperor’s affairs of states. Rumor says she was executed in Lushan’s rebellion against the emperor, but the truth remains a mystery.

钿Dian, also known as 钿花dian flower, originated from Southern Song(420-479AD), generally in red, green, and blue. Made with gild and/or silver, it can be pinned on hair as decoration. In most designs, dian make use of different materials to create flower shape. There are other patterns beside flower, such as bird, fish, duck. This is similar to many hair accessories  we use in modern days, purely for decorative purposes. It can be combined with Buyao, as seen in image 2,4, and 5 there are dangling beads on the dian.

In different occasions, women wear different hair accessories according to their status. Royal generally wears flamboyantly. in <后汉书.舆服志><Book of Later Han.Travel and Dress>says when Grandma-Empress dowager and Empress Dowager(grandmother and mother of the Emperor) visit the temples, their accessories“簪以瑇瑁为擿，长一尺，端为华盛，上为凤皇爵，以翡翠为毛羽，下有白珠，垂黄金镊。左右一横簪之，以安蔮结。诸簪珥皆同制，其擿有等级焉。”loosely translate to”Zan is made of tortoiseshell, about 23cm long, Huasheng at front, Phoenix Jue on top, using jade as feather, below here is white beads, and dangling golden accessories. There is a horizontal zan on each side of the head, to complete the entire outfit. Every one’s earrings look the same, but hair accessories shows hierarchies. ”

华胜Huasheng, also known as 花勝(pronounce the same), usually is made into the shape of plants and is put at the forehead of women as decoration.

<释名.释首饰>:“华胜，华，象草木之华也；胜，言人形容正等，一人著之则胜，蔽发前为饰也”<Late Han Etymological Dictionary. Name of accessories>:”Huangsheng, Hua, resembling flora; sheng, to describe people with presentable appearance, if people wear it, it is an accessory at forehead.”

篦Bi is a finer version of comb, it can be used to comb off dust and dirt from hair. In ancient China, people pay a lot of emphasis on grooming, thus looking good is very important, and people bring a comb with them wherever they go, especially for women. Slowly it became a fashion to use bi, which is a comb that pin on hair.

from this painting of Zhang Xuan we can tell how women use Bi at that point of time.

Nowadays we do not use so many types of hair accessories anymore-at least not at the same time. However, there are similar products for girls who want extra sparkles.I browse through my favorite shopping website shopbop.com and found some items:(https://www.shopbop.com/accessories-hair/br/v=1/2534374302062842.htm)

There are also bohemian style hair accessories that can be put at forehead, which resembles Huasheng.

The ancient style accessories can be re-designed into something more suitable, wearable in modern times, and yet reserves a bit of traditions.

One thought on “Categories of Traditional Chinese Hair Accessories”