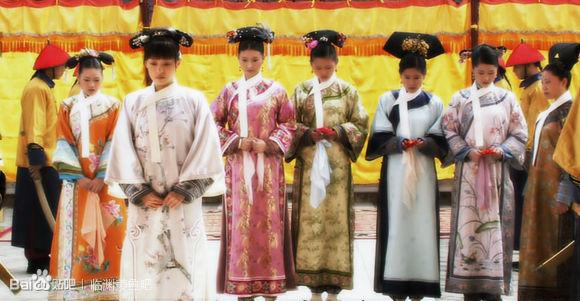 After all the research I finally start to write my own cheesy story about Emperor, Empress and concubines. I would narrate the story in the perspective of the SON OF THE EMPEROR who later ascend to throne after his father’s early death. It makes sense as he would be someone witness all what happened. It is gonna to be a brief story, compared to the 60-episode Chinese drama, but would be sufficient to present all the jewelries in the collection. Story can be altered depending on my final designs.

However this is just the draft so a lot of things I have not made up my mind such as the names of the concubines, emperors, etc.

Before starting the main part, here is some background of my story. The hierarchy of the concubines of Emperor follows the late Qing Dynasty system(Top down):

Girls selected from the triennial beauty pageant will start from the title of Noble Lady, skipping the Attendant and Repliant. The contestant of the pageant, before being selected, is called Xiunv秀女.

Every 3 years there will be a nation-wide beauty pageant to select new concubines for the Emperor. The indirect relatives of imperial family, as well as the families of government officials are required to send their daughters when they reach the age of 13. This year, the daughter of official Lee is 13, and thus, is sent to the Palace for the selection. Lee’s mother feels so anxious and reluctant to leave her daughter, as she knows the intense rivalries in the Palace can torture her daughter for the rest of her life. Lee has unparalleled beauty for her age, and mother is sure that her daughter will be selected as Emperor’s concubine. However, my father(the Emperor) is already 38 years old this year–older than Official Lee. Thinking of daughter becoming the concubine of someone that is 25 years older than her, the mother can’t stop sobbing.

Lee, however, shows more excitement than anxious. She has heard so much about the luxurious life inside the Palace. the endless jewelries and delicacies. She wants to be part of it, she wants all the attentions and respect. She has no idea about how she is going to achieve it, she only knows that she will gain what she wants one day.

On the day of departure, Lee’s mother gave her a 簪zan, telling her that she is going to become a lady soon, not a little girl anymore. This Zan has very simple design, as Lee’s family is not well off, and Lee’s mother hopes that Lee can always remember her root and her family.

Finally, 秀女Xiunv Lee is sent to the Palace, together with the daughters from other families. Lee’s mother has also appointed a girl servant for Lee, to take care of her. Among other families there is Xiunv Ou, who is the  best friend of Lee. And Xiunv Zhao, who is the daughter of first rank official Zhao, and is a spoilt princess of the wealthy family. Although she was only a 13 years old Xiunv, she can afford to give tips to a lot of servants in the Palace, so as to build up her network. Like Lee, Zhao’s mother also gives her a piece of jewelry. However, hers is much more delicate and expensive-looking, with dangling tassels–a Buyao步摇.

All the Xiunvs were settled in a small courtyard, each is assigned with one room and one servant. Of course, Zhao gets the best room and the most obedient servant. So their life in the Palace starts. None of them have met my father (the Emperor), and all are excited about it.

The first time i see these girls is at the Imperial Garden. They are around the same age as me. I can’t tell which xiunv is from which family, but it doesn’t matter to me, because only those are selected will be my father’s concubine—my step-mother, although as I said, we are at same age.

Soon the selection day arrives. The selection is always very straight forward. Grandma, the Empress Dowager, will hint my dad on who to select. She always favors the girls from her own clan, or from her relatives family. As for the girls from her opponents’ family, they never get selected in the pageant, ending up all becoming the servants in the Palace. That is why, rumor says that those family always send fake daughters to the pageant, so their real daughters will not suffer and become servants for decades. If Xiunvs are not selected by the Emperor, they will be released out of the Palace only after 25-30 years old.

I get to witness all these because grandma wants me to learn about the customs. As expected, Xiunv Zhao is selected first. She is from Official Zhao’s family, certainly she will become my father’s concubine–Official Zhao is so close to grandma.  Xiunv Zhao–Or Noble Lady Zhao now, has presentable look. However her attitude is so arrogant. But I guess no one can do anything about it, she has her father, and my grandma as backing, even my father doesn’t like her much, she will have her place in the family.

After the first Noble Lady is selected. the rest is more flexible for my father. As long as they are not from the opponent’s family, my grandma will close one eye. So normally the prettier ones are selected. My father picked this girl, I did not know her name at that time, but she is stunning. Her beauty stands out in all the Xiunvs. On her hair there is a simple Zan with minimum decorations. Later I learnt that she is from Official Lee’s family. After her there is another girl selected, which I did not pay attention to. I am mesmerized by Lee’s beauty, so much that I hope they were selecting girls for me, not my father. I always wonder why father needs so many concubines, he did not have time to meet all of them. I guess some of the step-mothers have not seen my father for years. The Palace is immense, and lonely. I see nothing fun being a concubine, especially when she is not favored by my father. It is just a sad life.

All the Xiunvs beings elected are now Noble Ladies, and they get to move into better place, with better attires and some more accessories. The nect time I see them, they are wearing flowery Chai and Huasheng. Lee is so pretty with her new look, even she was not given the best items. Nevertheless, their Palace life begins and so does my story with Lee.